Conflict is inevitable – in fiction and in life.

In fact, conflict is often the great accelerator in good fiction but there has to be a balance. As in cooking, there has to be the right balance of ingredients. Conflict is tempered by motivation and good characters need authenticity to make us believe that motivation. So many things to think of when crafting a good story but when that unavoidable donnybrook ensues – it has to be focused and complete.

There are some epically good match-ups this week. Let’s take a look.

Pure fun. To be honest, I was a little bit reactionary with all the Star Trek crossovers that IDW was pumping out in the last few years. I’m a bit of a purist – what can I say?

I stopped fighting it and gave in to Mike Johnson’s storytelling. The guy knows Trek and what’s more, he also knows how to correctly weave the fabric of both DC’s and CBS’s property into a story that effectively does justice to them. After all, if there was ever going to be a Star Fleet Captain that embodied the concept of fearlessness, then wouldn’t it be James T. Kirk?

It’s only natural that he and Hal Jordan should be compatible in their personalities. In fact, that’s the treatment Johnson delivers to the characters in this book. Not only does he mange to find the compatibilities, but he also manages to properly assess which foe should be matched with an appropriate villain.

It makes sense that Khan Noonien Singh should embody the red spectrum and seek to depose the Klingon Empire – that perfectly makes sense!

It’s a race against time in this issue – #5 of six – and the hunt for the Oan Central Power Battery is the last hope for the Green Lanterns to recharge their now-defunct rings while both a powered Sinestro and Khan are out to stop the crew of the Starship Enterprise and their allies. Johnson deftly inserts elements of DC’s Green Lantern Corps history like the Manhunters into the story and we have one gigantic mass melee ensuing in this story that would make Mike Tyson jealous!

Angel Hernandez’s clean lines are a welcome sight. He clearly captures the sequential story and presents images that are fresh, fast-paced and full of vibrancy. This is definitely a fun comic to read, but like I said before: time is running out. This is second-last issue and it makes you wonder how it will all play out in the end. 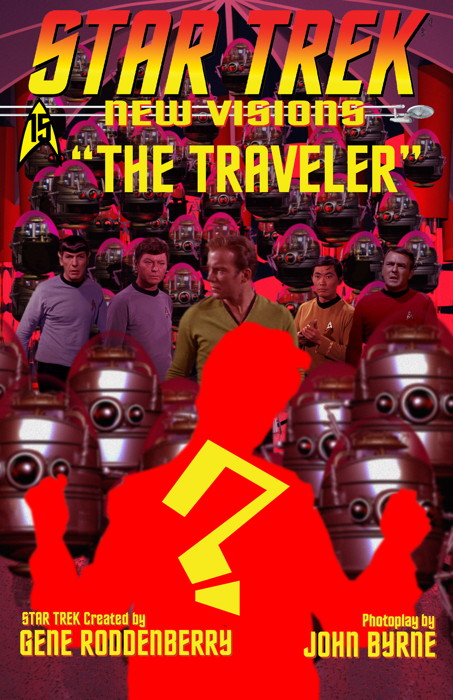 John Byrne has always been my hero comic creator.

Besides, not only is he writing these stories but he’s also painstakingly researching images that he can adapt and edit for the purposes of his stories. Plus, he’s also creating new images using photography and the arrangement of either original or new stills is definitely a laborious task to undertake.

This story is a bit of a homage to the Doctor – yes, that’s right – THAT Doctor. With the appearance of a mysterious “Traveller” who is busy trying to circumvent the machinations of a seemingly deadly mechanical race (anyone thinking the Daleks here, fellow Whovians?), he drafts the crew of the Enterprise into his plans.

It’s a fun romp that definitely captures the spirit and frenzied pace of the Doctor but Byrne puts his own twist on the character, and at the end, we are treated with a story that doesn’t go quite the way we expect it to.

It’s clear that Byrne is really enjoying his work on this series and I’m all for that, but it also has to be recognized how much of a challenge this is. It’s probably easier to actually draw the story, but to my thinking, Byrne is looking for other challenges, and he’s entitled to do that. 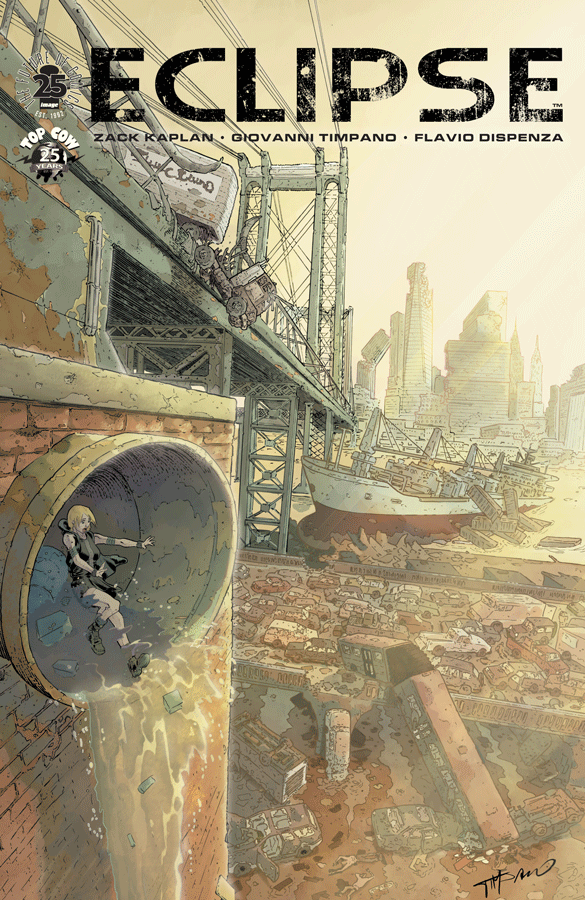 There’s a lot more backstory going on in this second arc of this innovative post-apocalyptic world. If you’re not familiar, imagine the sun is the enemy of humanity and people have given up the surface to live underground. But the ruling power is a corporation that this pocket of humanity is dependent on for electricity – the life-blood of the remaining underground civilization.

There are a lot of mysteries in this issue. The Black Market, the neighbouring settlement and what is Rose’s connection to all of this? Why is she important? It’s a good series and I really like the spirit of creativity in this book. Definitely one that you should add to your reading list, if you haven’t already done so. 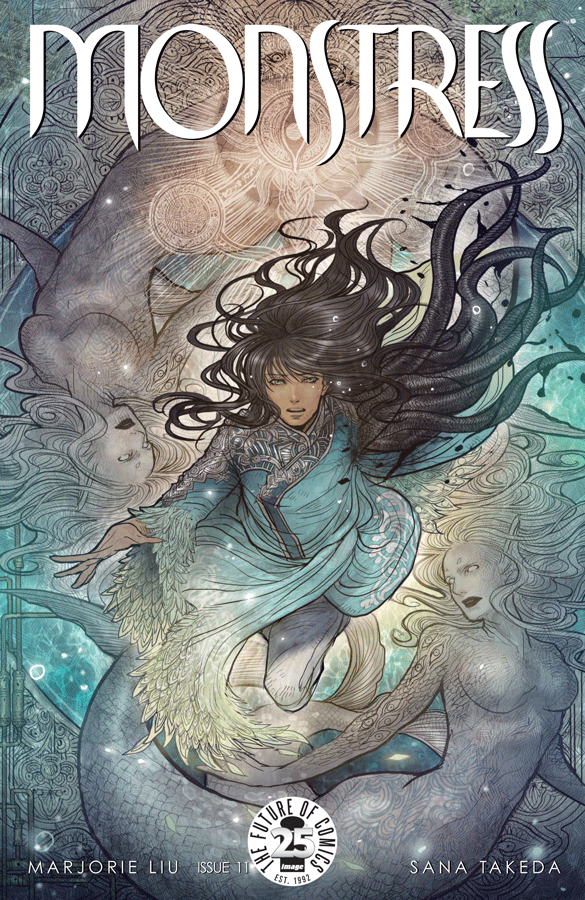 A real mystical extravaganza. Friends of mine have described this as a feast for the eyes and the story borders on epic, mythological proportions. I had the pleasure of meeting Marjorie Liu at last San Diego Comic Con and I have to say that she was incredibly sweet and generous of spirit. It took me by surprise that this demure and unassuming young woman could craft such a wildly imaginative story.

I am not an anime-style art-lover so I already have an automatic bias against it, even though I’m repeatedly told by my peers that Sana Takeda’s art is a phantasmagorical spectacle to behold.

… yeah – they actually used the word ‘phantasmagorical’. No kidding.

It is quite visually sophisticated and the story has a mythology to it that is staggering in its execution. In terms of story-telling effort, it’s a massive undertaking of imaginative power and really forces you to pay attention to it; really thoughtful stuff. 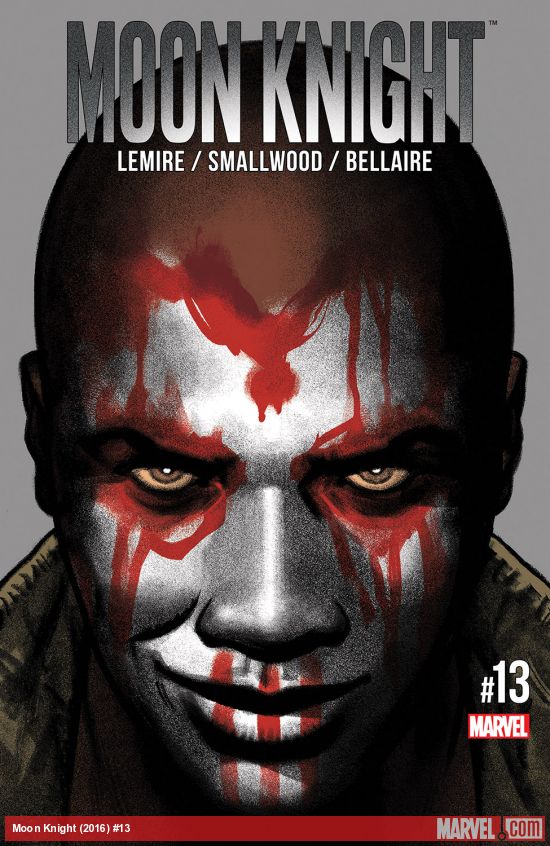 That’s been a bit of a while coming, given that my appreciation for the last few issues of Jeff Lemire’s work on this book has vacillated up and down. I’ve found I’ve really wanted to like this book but the storyline has either been too stretched or fairly uneventful.

Last issue saw a change for the better with Marc Spector actually managing to rescue the wife of Anubis, but this issue actually saw the beginning of an explanation for Marc’s multiple personalities and the source of discord with Khonshu.

This issue had some meat on its bones. It’s been thirteen issues, but I think we might actually be getting somewhere. 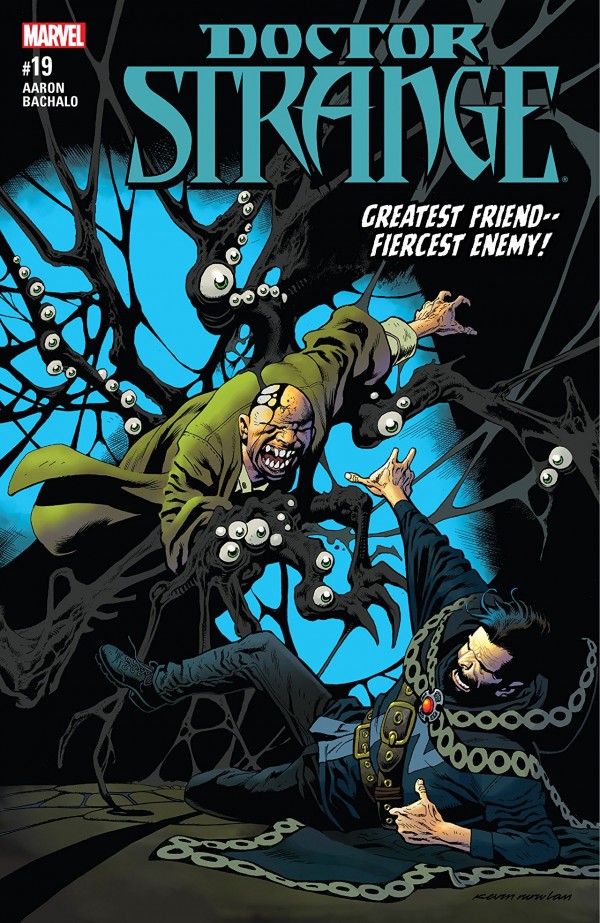 This was a fairly understated way to go out. The battle with Misery was dealt with in a rather light way but at least it showed the relationship between Wong and Strange to some meaningful degree. It really wasn’t much of an exorcism and it in fact that turned into a failed attempt. So I have to say I wasn’t overly impressed with the story, but I have to say that I really like Aaron’s addition of Zelda Stanton. She’s a great assistant and brings an enjoyable energy to the book. Too bad Aaron won’t be around to further her some more but I’m looking forward to seeing what the new creators can do with this property. 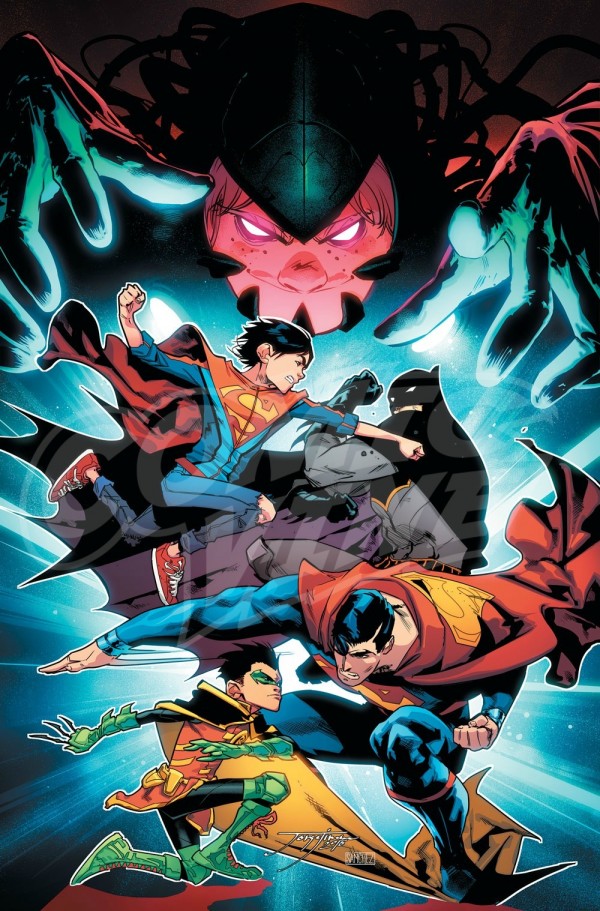 Peter J. Tomasi has once more given me a feel-good story that I can get behind and completely endorse. After all, in this day and age, to find a story that has an authentic sense of innocence to it and not overwhelmingly drenched in le fromage du jour certainly gets my attention and respect. I love his perspective on Damian Wayne and completely reduces this character to a context that I can appreciate. I think the reason why I never liked Damian in the first place was that he was a child who acted like an adult. Given his training and experience, I could rationalize that take on him, but I never saw him as a prodigy; simply an egotistical upstart with an over-achiever complex.

Tomasi has included all that, yet there is a flavour to his dialogue that reinforces the Boy Wonder’s petulant childishness! Damian IS just a kid and with that permission, I can appreciate this character better. That’s what Tomasi has allowed me to see and for that, I’m grateful.

Jorge Jimenez’s art matches this state of mind. Superboy’s wonderment at his own powers is captured perfectly in Jimenez’s drawing, as is Robin’s attempt to mirror the grimness of his father. Even the sulkiness of Kid Amazo and the helplessness of his little sister are perfectly captured. Even the fight sequences are childish in their reactions, their attacks and even poses. Jimenez really knows how to capture the expressions on kids’ faces and that’s perfectly suited for this book.

You want to see a fight? Whoa – with all the lead-up about this issue, I have to tell you, I’ve been looking forward to it for what seems forever!

Fabok’s art is awesome detailed and I especially love the panelling; frames lovingly crafted to look like something out of Dave Gibbons’ own portfolio. The lenticular cover also adds a unique quality to this book that really sets it apart as something special to own.

Other than the obvious reference to the Comedian’s button, the various homages to Watchmen, Flashpoint and Crisis on Infinite Earths combined in force to totally overwhelm me! What an awesome battle between Batman and … well, let’s hold off on that until you’ve given it a read!

But Tom King demonstrates his storytelling prowess once more. Not only has he managed to create a story with an abundance of questions that need to be answered – forcing you to slaver in anticipation until the next issue – but he has also written one that hints at being a universe-shattering one! The questions in this book all seem to lead the reader to the possibility that King is about to throw a monkey wrench into the DC Universe works.

Now, after Crisis, Infinite Crisis, the 52, Flashpoint, Rebirth – yada-yada-yada, can the Multiverse take another hit? If my suppositions are correct, then King seems to think so. Because, the other question that begs to be asked is: what has King got up his sleeve? After all, this could be the comic that seeks to unify it all together; sort of a “grand unifying” book, if you like.

Of course, this could all be just an elaborate red herring designed to have fanboys like me throw those questions out there to drum up some buzz.

… So why am I still grinning like a kid?

If a comic has reduced me to that state of mind, then it definitely deserves the status of the Pick of the Week. After all, that’s what I want a comic to do! I want it to mesmerize me and hold me sway with not only its visual glory but also its storytelling sorcery. In order for a twenty-two page document to do that, its words have to have a degree of compulsion that it can lull you away from what you need to for that day and devote your attention to its demands. Nice work Tom King!

… and I didn’t even put up a fight. No conflict here!