I’m a geek and I write about entertainment.

This week I had a conversation with a PR specialist who was trying to categorize me for her company’s database. Admittedly, it does look like I mostly write about comics – I write a weekly column, after all. But I also write about television, films, and conduct celebrity interview. Oh, and of course, there’s my favourite subject: Star Trek.

But comics heavily represent nerd culture. I don’t think one can call himself or herself an authentic geek without a working knowledge of comics. Look at comic conventions, for instance. No longer comic exclusives, now they serve as meeting points between fans and celebrities, occasions for screening film previews and more than likely, a Star Trek celebrity will be found on the premises.

Comics are essential and they inform nerd culture to a high degree. Even the characters on The Big Bang Theory are all bona fide comic junkies – it’s part of their image, right? 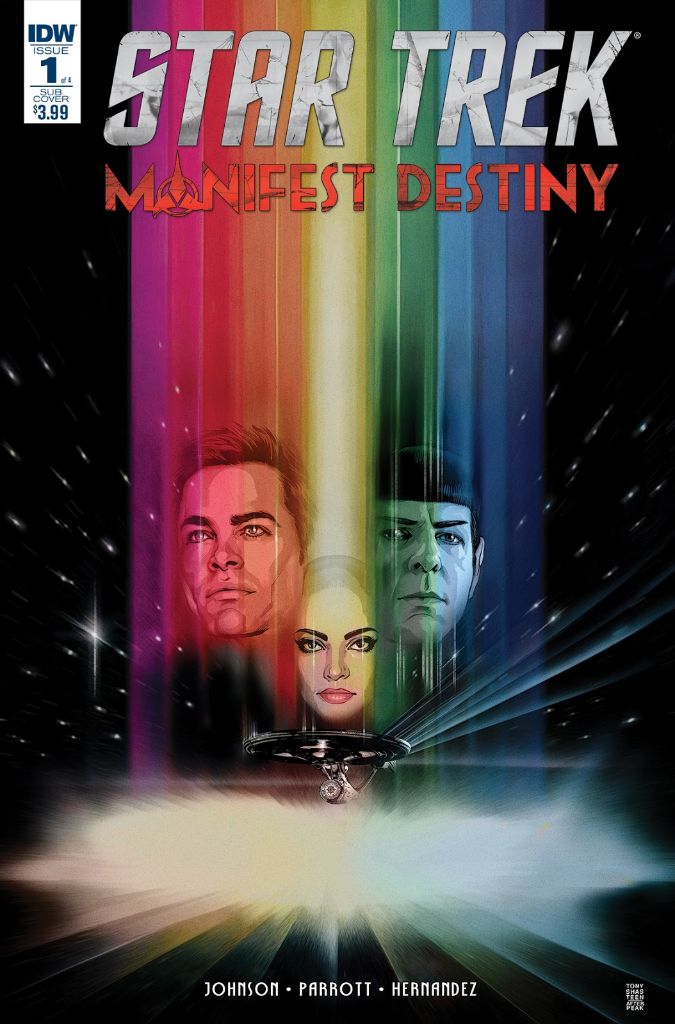 I’m not much of a J.J. Abrams fan, but this comic – set in the “JJ-verse” really caught my attention. Though it uses the images of the new Trek figures, it had the distinct flavour of the original series. Klingons doing what Klingons do best: fight; if that isn’t a TOS episode then I don’t know what is.

I also like the fact that this is a bit of an offering to the classic Trek fans. I think the cardinal sin that Abrams is guilty of is actually admitting that he wasn’t much of a Star Trek fan to begin with and that he found it too cerebral. I have to confess that I never experienced that with Trek; the roles played by the Klingons back in the 60’s were clearly evocative of the Soviet Communists in the Cold War. If that was too hard for Abrams to figure out then clearly there’s hope for my screenwriting career.

Still, it’s an easy, pleasurable read and a very enjoyable premise that takes us back to those original 1960’s adventures. Well done to Mike Johnson and Ryan Parrot and the IDW crew. 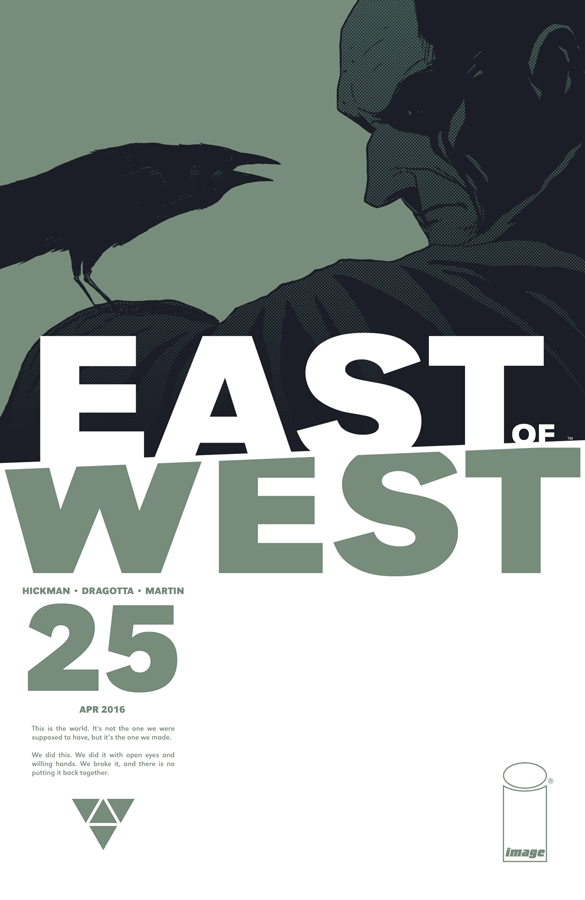 I swear there’s material that goes right over my head in this book. It’s too big a concept to be contained in an episodic format like a monthly comic book. In fact, I would have to venture that there needs to be an epic-sized omnibus at some point to fully portray the majestic nature of this book.

I think that’s my only criticism of this book: it’s too big. Conceptually speaking, how does Jonathan Hickman do this? The level of world building is so complex that it takes a real mental leap to move from the state of the world to the finely detailed characters he creates. He makes the move from epic to miniscule look so easy that it’s hard to imagine just when this story will conclude.

Mr. Hickman – allow me to watch you work? I’ll provide the coffee and donuts and will quietly sit in a corner as you mind your business. 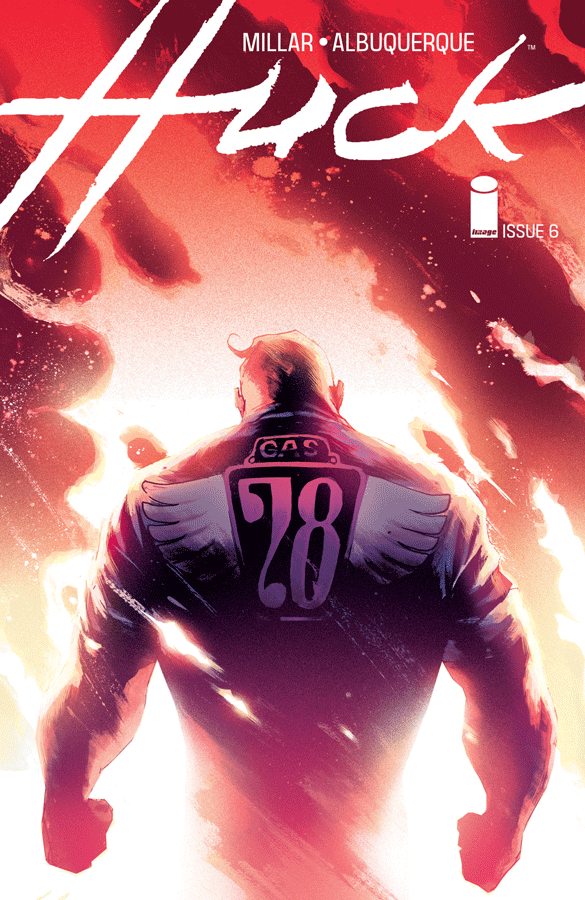 The hero we need, indeed. This is the type of inspiration that allows us to hope for better things – even if it’s just 24 pages at a time.

The measure of a person’s character is the type of choice he makes when no-one is watching. If that’s the standard, then Huck is truly an idyllic character. But the issue that arises from a story that is based in idealism is how difficult is it for us to achieve this state? If it’s possible to just hope that we can be better people, then isn’t this a story that’s better than no hope at all? Shouldn’t we all have a list of daily good deeds to perform? What if that became a mandatory part of our day? Hmm … maybe if we start with small, achievable ambitions, then perhaps Huck isn’t so idyllic after all.

Something to think about, and if a comic can do that, then perhaps we can hope for better things in the end. 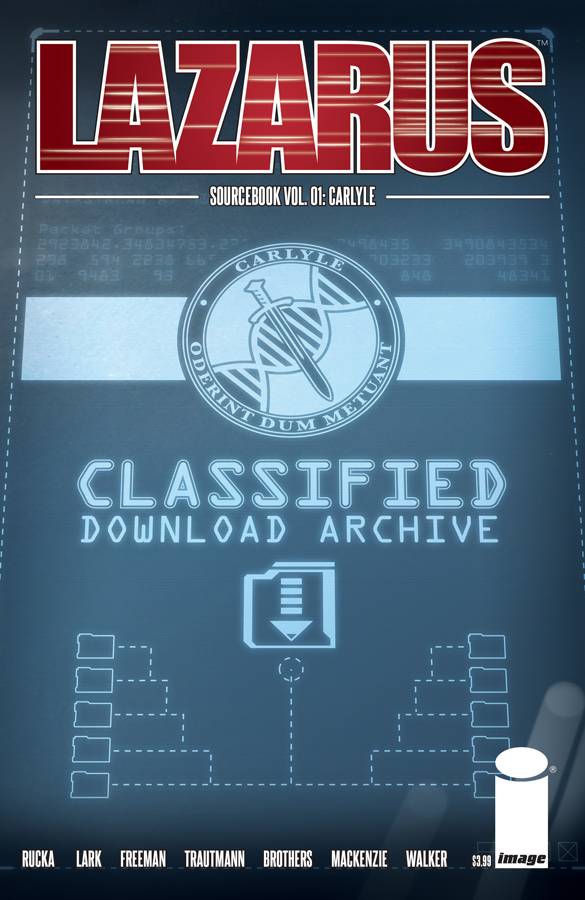 Holy crap! This totally blew my mind. If you have about an hour or two to spare, you can go through the new world perspective according to House Carlyle. When you consider how much background information there is behind just the Carlyle Family alone in this comic, it’s truly a staggering book.

From media shows to political alliances; history to current events – this book has everything you need to know about this new Earth from the Carlyle point of view. This has to be the best sourcebook on a comic since the Guide to the Marvel Universe back in the 1980’s. 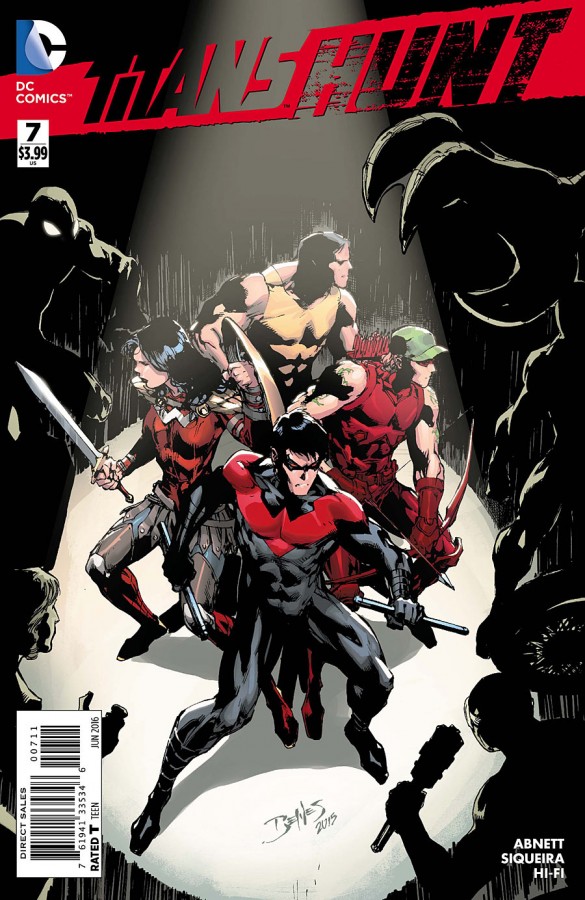 I miss the Teen Titans. With the Rebirth even coming up I’m really concerned how this essential DC superhero team will fit into the new universe.

The Titans were an affirmation of the growing identity of youth in the 1960’s. Not only were they the former sidekicks of heroes of an older generation (you know, the “Greatest Generation”?), but they were also the counter voice to that identity by recognizing them and also reminding them of the necessity of responsibility.

Over the years, the Titans have lost that sense of identity. Instead of being the 15 and 16 year olds, they became 19 and 20. They married, took on new identities that pushed them away from their former guardians and became heroes in their own rights. In fact, Cyborg completely lost his “teen” identity in the last five years or so and is now a Justice League member in his own right.

With this fracturing of the Titans, a return to their roots is long overdue and I’m loving seeing these classic heroes return and Dan Abnett has done an incredible job of ushering them back into the continuum. I fear, though, that the Rebirth event will have a drastic effect on this, but one thing’s for sure: they’re nobody’d little teenagers any more. 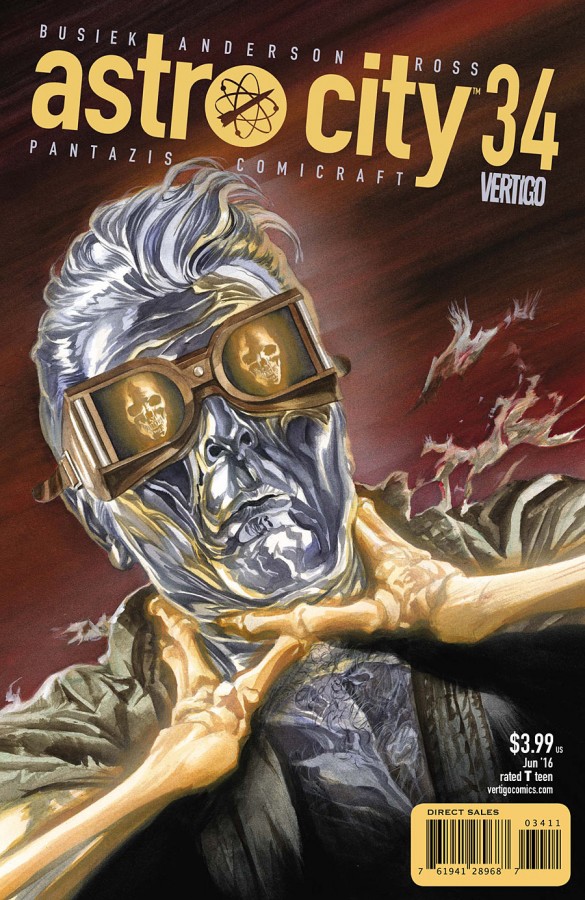 The continuation of the Steeljack tale.

It’s Robert – freakin’ Mitchum in metal form! I think I had recognized what Brent Anderson had done with Steeljack earlier but I didn’t really harp on it. But Mitchum was one of those classic tough guy actors. You know, the types that used to keep their mouths shut in what passed for Bowery Street stoicism? If you were trying to channel a remnant of those “tough guy” days, then you can’t get a better figure than Mitchum.

But that’s Steeljack – an ex-villain gone straight and trying to clear his friend’s name. There’s a wonderful meshing of nostalgia, nerd culture and the “Greatest Generation” also shows itself in this story too. This issue is my new favourite Astro City story. Total 1950’s vibe – the classic hero/villain culture dimension; loved it.

Busiek is a master of the single-character narrative structure. He definitely knows what he’s doing and he uses this gift to its full effect; comic entertainment at its finest. 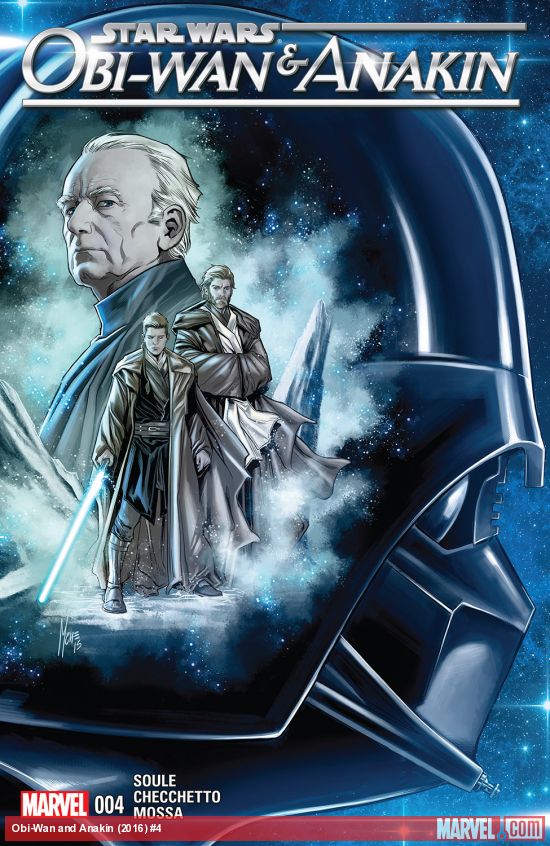 This is a storyline that really isn’t hooking me. To be honest I’m just waiting for it to be over. It’s hard for me to say something bad about a Star Wars title, but I just don’t find the premise convincing. There’s no reason for the two Jedi Knights to do anything on this planet other than survive. Perhaps if they had crash-landed and were trying to find each other – that might have kept me more interested. But it’s difficult to see any new Star Wars title other than the initial ones as anything more than simply milking the situation at this point.

Even though I’m not loving the story, I do want to give props to Charles Soule. Despite the weak premise, Soule has managed to provide us with more insight into the relationship between Anakin and Chancellor Palpatine. We get to see more of the manipulation and how Obi-Wan handled his student during this transitional time. As a teacher, I find it very relevant. It’s also new canon now, so Soule has crafted something that will be forever a part of the Star Wars legacy. So, I have to recognize that.

I have to give this pick of the week to:

Now, I’m actually having a little bit of doubt as to the legitimacy of my choice. I mean, it’s not really a comic – it’s a sourcebook to help explain the context of a comic.

But it’s my column and I’ll do what I want!

It’s the detail that astounds me; the sheer imaginative power to construct it. When you read this thing, you really do have to book time to give this a thorough read. I mean, it reads like an excerpt from the CIA Nation Database website. It has geographical and historical summaries, tactical and strategic overviews – there’s even descriptions of the combat troops, vehicles and weapons the Carlyle Family employs. It even has a dash of propaganda in the description of entertainment and popular media the “waste” (the term for the bulk of the Carlyle Population in their territories) are exposed to.

Greg Rucka is a true storyteller who you know already had this in his head. This is the work that one needs to go through to properly tell a story. He knows everything about this world and it’s there for us to share. This book is a real accomplishment and I couldn’t let it go unnoticed.

Lazarus has to be my number one favourite comic right now and to see the wealth of background information that Rucka has at his disposal is staggering. Well done.

That’s the entertainment writer in me paying homage to a creator because when it comes down to it: showrunner, producer, writer, actor, and comic artist – they’re all creators. And if you create something in the geekosphere that I love to frequent then you’re somebody of interest to me and I want to write about you.

Oh, and you probably read comics too.