Sorry this is so late. Lots of loose ends to tie up that got in the way this week.

Taking care of loose ends is a driving force in people’s lives, so, as in life, we see this element of effective storytelling in occur in comics.

… Well-written comics, that is to say.

That’s our theme for our curated list. Without any delay, let’s get to the list and what gets taken care of in this week’s selection of comics! 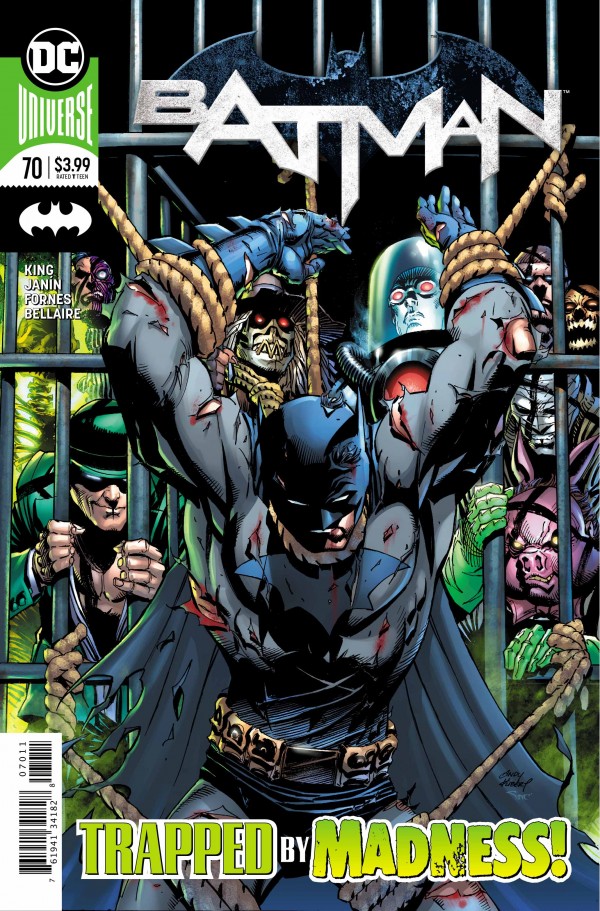 First of all, I have to say: at last! One of the problems with comic storytelling is the delay. In this new age of instant media consumption and immediate gratification, having to wait a month for the next episode of a story can be agonizing. I’ve gotten to the point where I just want to wait for the hardcover or softcover trade compilation and binge on the entire story. However, I remember those younger days when this was not an issue but simply a fact of life that we accepted.

Still, Batman finally wakes up in this issue and sees himself in the real world. Woken from the world of nightmares, he’s royally pissed off and who could blame him? He strongarms his way through Arkham still not fully aware that it’s not just Bane pulling the strings here, as we learned last issue.

Tom King is thankfully paired up with Mikel Janin again in this issue. I enjoy Janin’s work immensely and I think he is one of the artists who best visualizes King’s storytelling. However, while we get a great deal of relief in that Batman has finally finished his dreaming, we have to yet wait for matters to be fully resolved. In terms of loose ends, we have a little bit to wait.

Still, there was an immense degree of satisfaction in seeing Batman deliver a small amount of retribution on select members of his captors and I think that anyone reading this story will experience that same enjoyment. 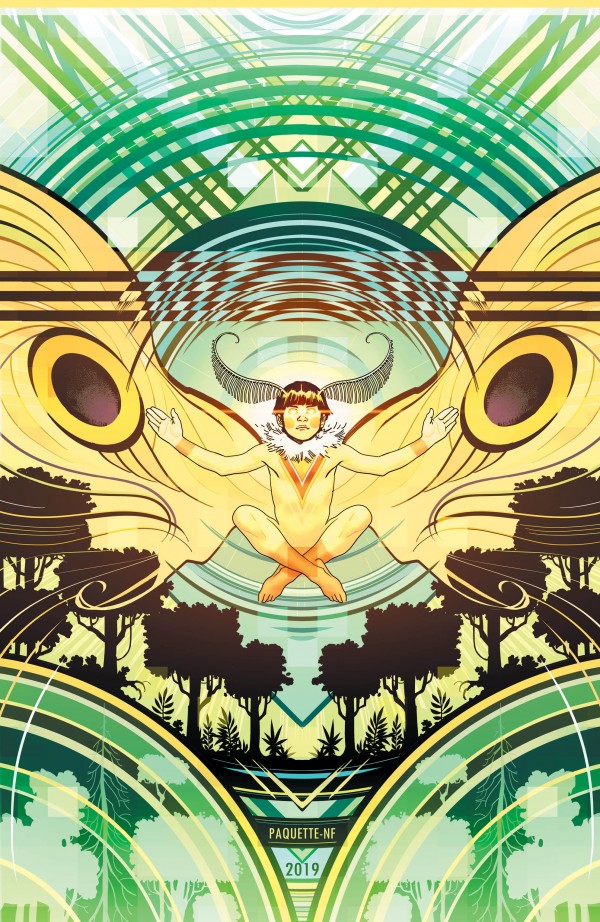 Again – another thankful note that Bilquis Evely is partnered with Si Spurrier on this issue. I’ve never met Bilquis, but talking to other high-calibre artists like Yannick Paquette, it’s widely agreed that her talent is absolutely astounding. She brings a quality of etherealness that is needed for stories like these. She’s a treasure.

I’m so completely lost in this story. There are no loose ends to recover as Si Spurrier’s gift with the ephemeral is such an immersive experience that you lose yourself in reading this story.

Still, I have to experience a sense of frustration at the new AI in charge of the Dreaming Realm. Though it is still trying to discover itself, I feel that whatever is going to be in charge of such a significant part of Existence should have a sense of what its role is going to be. As Dreaming is an eternal state of human perception (and I say Human because what else in our reality dreams to a significant amount?), shouldn’t whatever is in charge be more than a self-aware computer program more in tune with the nature of human perception than this fledgling artificial entity?

I know … I’m questioning the decision-making of a story creator who I hold in complete respect, but this is something that is nagging on the edge of my appreciation. I thoroughly enjoy this story so I suppose the more I question it, the more it means to me.

This is a rich story. The reader is lost in its wide reach of trying to bring the realm of dreams into a rational perspective. It’s glorious in the scope but sometimes I feel like I need some sort of a guide. I miss Daniel and am eagerly awaiting his return to bring sense and order to the chaos that currently is at full level in this part of the story. 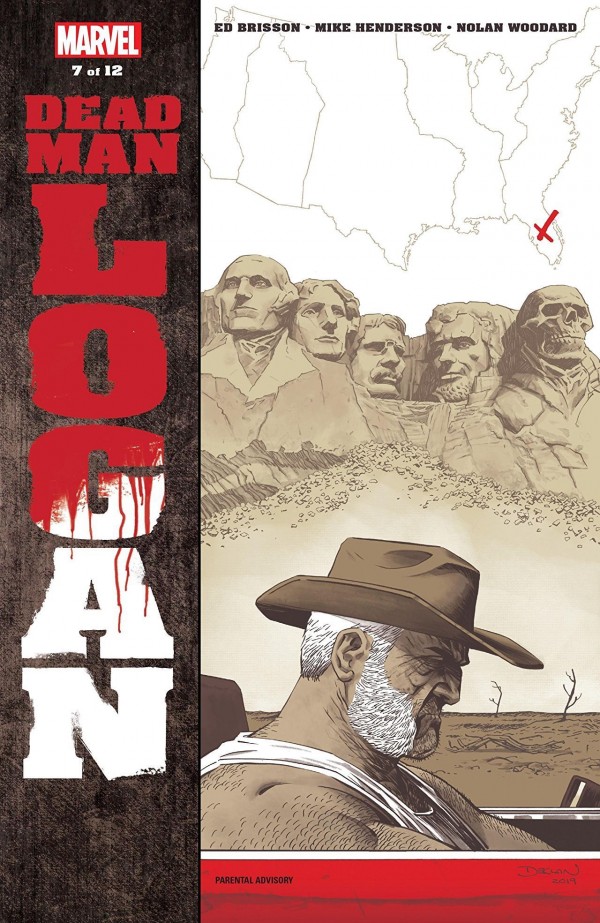 The saga of the elderly Canadian killing machine from another reality returned to his own home alternative future continues.

We are talking the ultimate loose end here, folks. Logan has completed his adventures in the prime reality (ie: The Marvel 616 Universe) and tied up that loose end, but now he has other things to take care of in his home reality.

Wolverine finds himself on the wrong end of some angry young cannibals grateful for his healing factor. Logan is essentially their never-ending source of meat and a hell of a golden goose, so to speak. How Ed Brisson felt writing this story, I guess I’ll never know, but it’s definitely a visceral one. Mike Henderson really earned his pay on these pages.

I like that Logan is rediscovering his original story. Instead of having the responsibility of the twisted time stream on his shoulders, Logan is free once more to walk his own path and to pick up the pieces of the life he left behind back in 2015.

This story is titled “Welcome Back, Logan” and while Logan may have run afoul of some bad guys, he also is reunited with some friends -despite the fact that these friends also want to do some damage to him. We’re reminded of the nature of Logan’s world and how savage and lawless it is and it makes us wonder why Logan would ever want to return to it in the first place. But, as we remember the title of this new chapter of Logan’s story is Dead Man Logan, it’s only natural that this is where he wants to return, to die.

I’m impressed by Ed Brisson’s capacity to extend the swansong. It’s not easy trying to pick a moment to die that’s right for such a high-profile character like Wolverine but this is a character’s ultimate loose end to tie off. 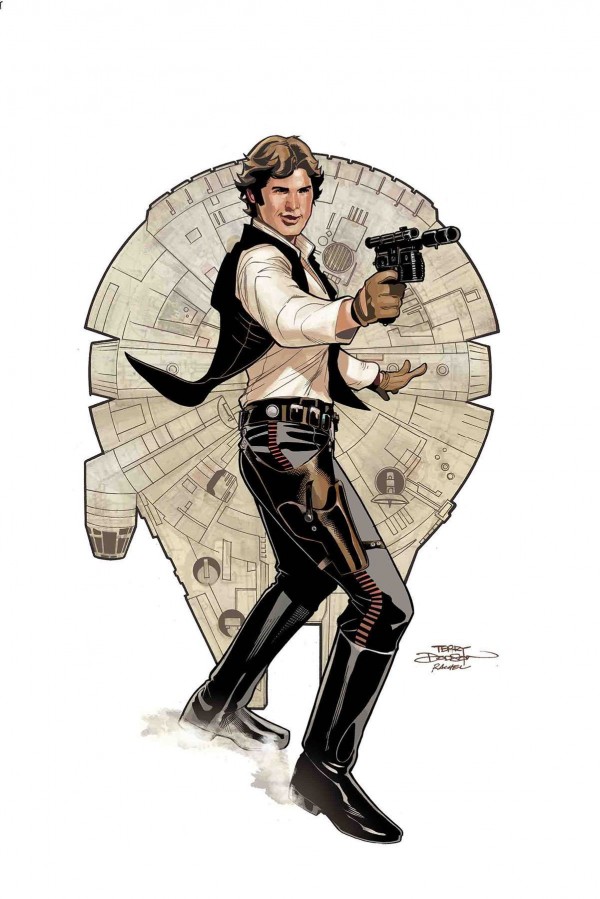 From Grek Pak and one of my favourite artists, Chris Sprouse, this Star Wars one-shot is a fantastic bit of insight into the mercenary Han Solo’s transition from serving himself to serving the Rebellion. It’s a feel-good story that sees Solo’s heroism develop.

We Solo is daring, but this is where his bravery comes from. Doing service is something that comes easily to some people but for others, it takes work. Grek Pak gives us a wonderful story in which the performing of good deeds actually does have an effect on Solo’s mind as he desperately tries to extricate himself from the Rebellion but winds up performing more missions for them. As soon as he completes one, another lands in his lap and he has to wrestle with his conscience, inevitably choosing the right thing to do in the end.

Solo is a character who’s a lot more responsible than fans initially give him credit for. His bravado, impulsivity and lack of forethought all manage to obscure his innate goodness. This was a great story that highlighted that decency that his scoundrel ways hide. 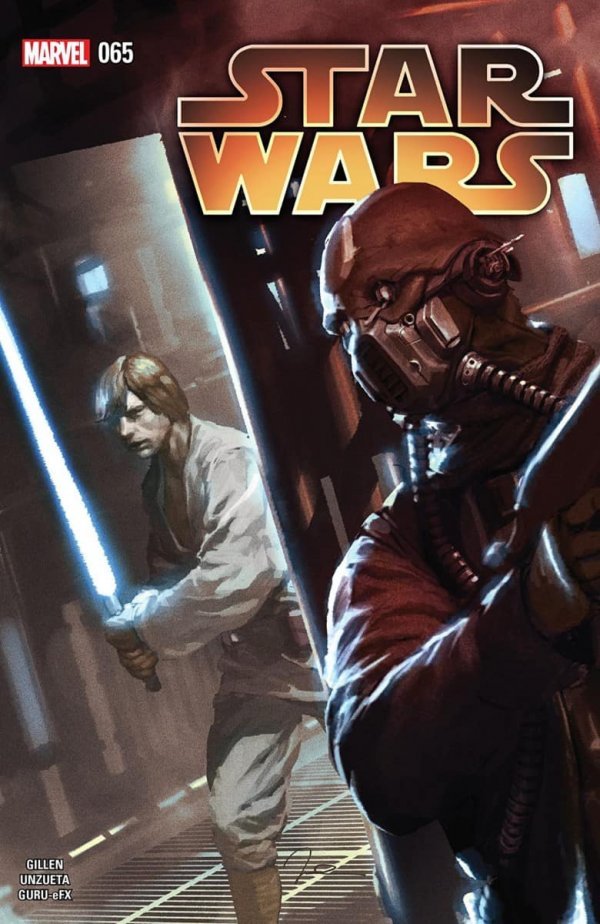 Part IV of “The Scourging of Shu-Torun” from Kieron Gillen and Angel Unzueta continues to both delight and satisfy. This is not only one of the most entertaining arcs of this iteration of Star Wars comics, but it is also the most emotionally satisfying one.

I like it because it’s a story from another story from these creators in which the Rebellion was dealt a nasty dose of betrayal at the hands of Queen Trios, who, to be fair and is hinted at in this issue, really trying to preserve her planet from the Empire. Yet, the way in which she cultivated a personal relationship with the Rebellion leadership and with Leia too, makes this a revenge story that needs to happen.

Of course, things don’t always go the way the rebels expect as Benthic’s partisans are more interested in justice than revenge and instead of just settling for crippling the planet’s power system and Imperial production schedule, the partisans want to destroy the planet.

Still, this is one of those immense loose ends that are fun to come back to and explore. Trios betrayed the Rebellion and ten issues later we have this awesome storyline that explores the reckoning for that action. But Gillen knows these characters so intimately well, that of course something unexpected has to happen that even the most intricate of planning cannot account for. This turns the chances of success from “maybe” to downright “next to impossible”. However, despite overwhelming odds of failure, they still manage to pull it off.

Of course, we have yet to see that as another wrinkle develops in the fabric of the story as other parties get involved with the defence of the planet.

Luke’s naivete, Han’s daring, and Leia’s determination all shine through this exiting story that is fully satisfying for every fan of this franchise. These are new stories about our favourite characters from this cinematic masterpiece and they are made possible by exploring old threads and tying up these “loose ends”, which of course, make for the best story starters.

It’s the pick of the week for this list, and I have to say, it’s a well-deserved one.

Have a great week and make sure you check all those loose ends in your life-stories for exciting discoveries of your own!