What’s the theme this week?

Yep – straight up: that’s what really makes the world go ‘round, folks. That satisfying feeling of making someone pay for their crimes against you. These stories always find their mark with an appreciative audience because they have the right elements: justice, schadenfreude, and a little bit of blood lust thrown in for good measure.

Who needs therapy, am I right? Let’s get to the list.

I have to say, the best story in this anthology of three belongs to Tom King and his deliciously evil interpretation of the Joker’s insanity. The best Joker stories are the ones about revenge plots on the Batman and with the upcoming nuptials, the Joker now has an awesome opportunity to slake this thrist for revenge!

I love how Tom King can take the seemingly harmless art of the ‘Dad joke’ and turn it into something ripe with insanity.

But the other two stories are ripe with teasers. The story from Brian Michael Bendis and Jose Luis Garcia-Lopez definitely tease a major upcoming Superman development and the introductory Justice League teams are also fun to read about. But it’s Tom King who really steals the show in the casual way the Joker causes collateral damage in this early start to the wedding of Catwoman and Batman in Batma #50. 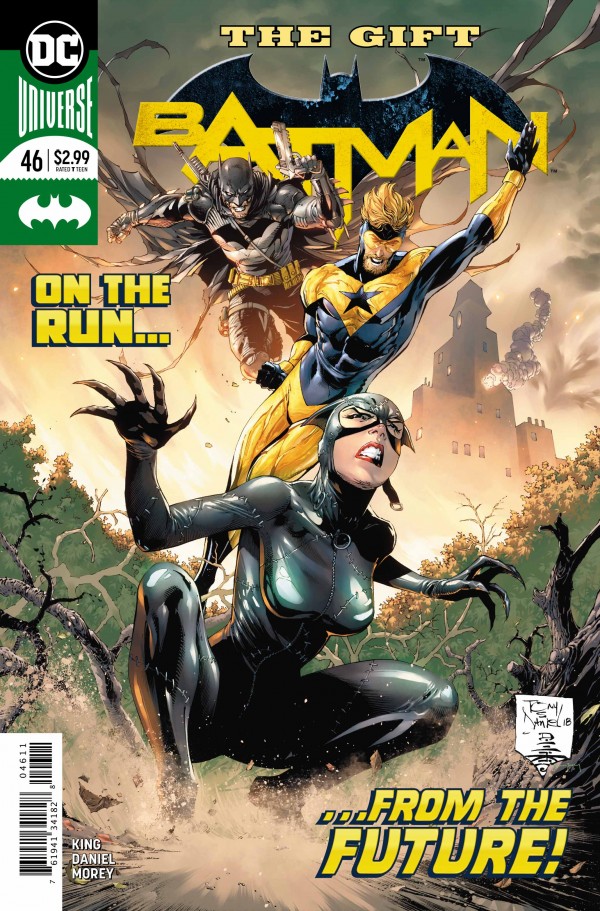 Speaking of which, Part Two of this story-arc, titled “The Gift” is like reverse-revenge. In trying to something decent for Batman, Booster-Gold’s mishandling of the time-stream and saving Bruce Wayne’s parents as a wedding gift causes more harm to Batman, his fiancée and family than good.

Tony S. Daniel’s art is absolutely spot on. But it’s not just his style; it’s his attention to nuances, like the faint trace of insanity you can make out cresting across Booster’s face as he makes one more misjudgement. It’s truly awesome sauce.

There’s a lot of ill-will in this story though. Dick Grayson is actually Batman in this alternate present; one who is brutal, murderous and will stop at nothing to rid Gotham of the plague of Jokers that have afflicted his city. Bruce Wayne, on the other hand, is an indulged socialite who really wants nothing to do with the city he lives in, trusting that his family’s wealth will protect him from it.

This is the truest revenge story. I mean, a character who was thought dead, rises up, heals and arms himself for a an occasion of bloody revenge that even the gods of this realm step back and say: “let this man through” – yeah, that’s (in)holy disposition set on high.

There is a higher purpose to this book and revenge is a sweet layer to its intricacy, One of my favourite titles (I own both hardcover compilations to date) and is probably one of the top three of Image Comics’ offering of books. You need to read this series to appreciate it but I would suggest picking up the hardcover compilations to read and appreciate the story in its entirety. 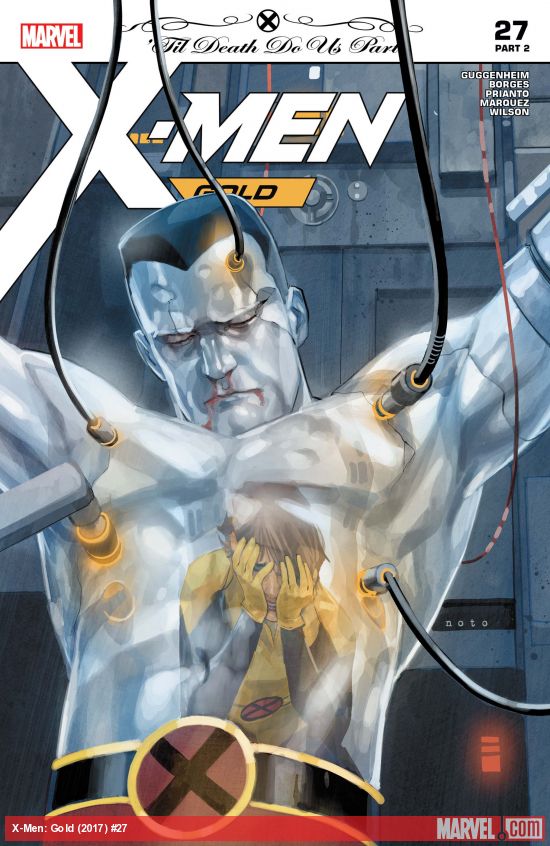 I can’t say I was too crazy about this issue. There was something off with the art that I couldn’t specifically identify. It seemed pale and faint and lacked a vibrancy that my plebeian senses couldn’t fully describe. Perhaps it was the digital copy I was reading but it seemed definitely off.

Still, the wedding of Kitty and Peter is still in the works and while I am eager to see this pair hitched (I mean, I can’t have her, so why can’t the other imaginary character?), I’d like to see more focus on it. There are a few mentions of the impending nuptials but they’ve been mostly doubts and, if you’ll remember what happened to Kitty in Joss Whedon’s Astonishing X-Men, well, let’s just say that history has a strange way of repeating itself. Yeah – there’s a parallel.

Still, I have faith in Guggenheim.

The Hunt for Wolverine: Weapon Lost #1

Wow … I actually had my doubts about this one. To be honest, the trope of the superhero returning from the dead is a little hackish, in my humble opinion. But there is something inside me that wants the original Wolverine to return to this universe. As much as Old Man Logan has been somewhat of an entertainment, we all know, it’s not the same thing.

Charles Soule has been given this story and uses an interesting combination of lesser characters like Misty Knight, Frank McGee and then to top it off, he also brings in Daredevil. After Matt Murdoch was asked to look into the disappearance of Wolverine’s body, he enlists these two as well as one of my favourite New Mutants, Cypher.

This is a very engaging story. While not strictly a vengeance tale, you know that wherever there’s Wolverine, there’s going to be some aspect of revenge lurking somewhere in the shadows of future issues.

My curiosity – and yours – should be piqued. Pick it up, if you love your favourite Canadian super-hero, that is. 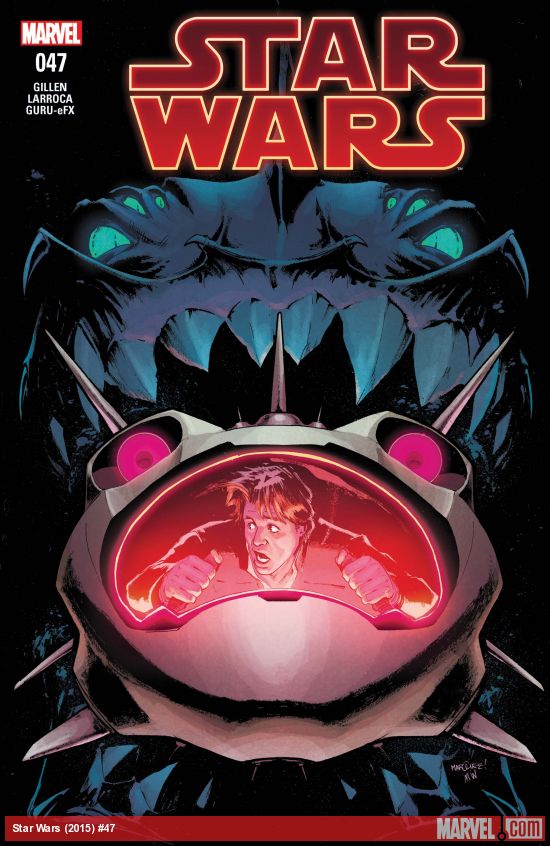 Part IV of “Mutiny at Mon Calamar” and … I’m loving it. Kieron Gillen has the right touch for interpreting the nuances of the original Star Warriors.

I just finished writing an article on Carmine Infantino’s work for BACK ISSUE magazine, which looked at the original run of Star Wars back in the late 70s and early 80s and I am reminded of how much passion and excitement there was in those books by Gillen’s writing. He has the same pace and excitement that you need to show when this particular franchise is presented.

Luke, Han and Leia have a history of getting into impossible situations and they manage to succeed through a careless bravado. That’s the essence of Star Wars – it isn’t a science fiction, it’s a fantasy and you just have to accept that great things happen to heroes who are brave and trust to luck. Of course, Luke has the Force at his side, which was a wonderful deus ex machina, but at the same time, that’s how you want heroes to succeed: they have good intentions and the fact that fortune favours the bold.

He’s the right writer for this particular band of Lucasfilm heroes and Salvador Larrocca’s art is absolutely perfect. This is probably one of my favourite titles from Marvel and it should be yours too. I mean, if you read comics, you probably love Star Wars. Buy this. 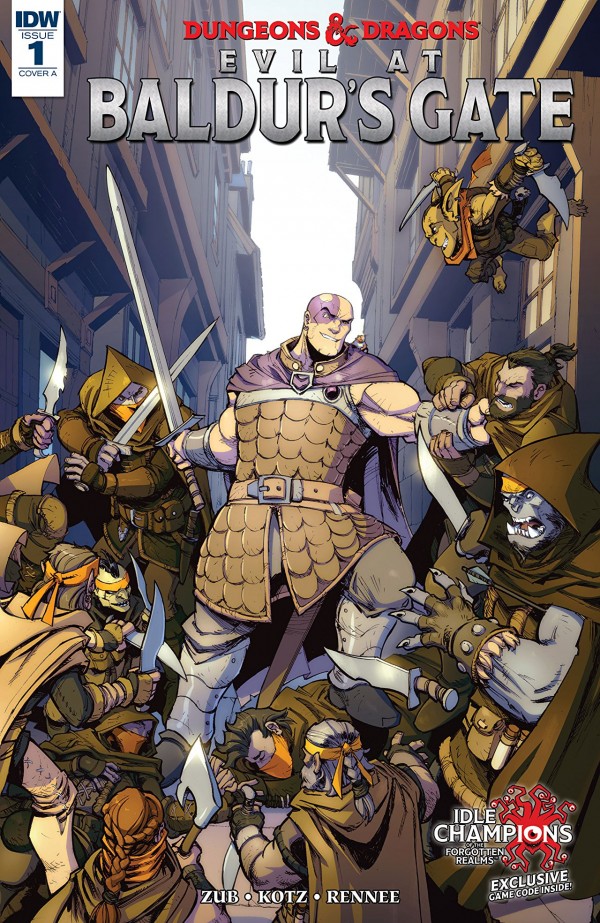 The character of Minsc (and his miniature giant space hamster, Boo) have never failed to make me laugh. His constant battle-cries for justice and vengeance in the name of everything good and decent, striking hard at the swollen, pus-ridden, pimply face of evil is always a balm for what ails me.

Jim Zub is no stranger to the intellectually stunted yet stalwart ranger from Baldur’s Gate. One of my particular favourites from the computer RPG from Donkey’s Years ago, this character has survived in comic-book format and in the minds and hearts of 2000’s PC gamers. As much as I love the character, I think that D&D needs to consider creating some console RPG games to re-introduce him back into the minds of current players. Zub has a lot of experience writing in this milieu and this character but even he can’t keep it from fading into obscurity.

Still, this focused tale is a great romp and you can clearly see Zub’s D&D roots in this book. It reads with the same flavour as a typical D&D session and because I am so starved for a game, I loved reading it nd will definitely look forward to picking up #2.

Star Trek TNG: Through the Mirror #1 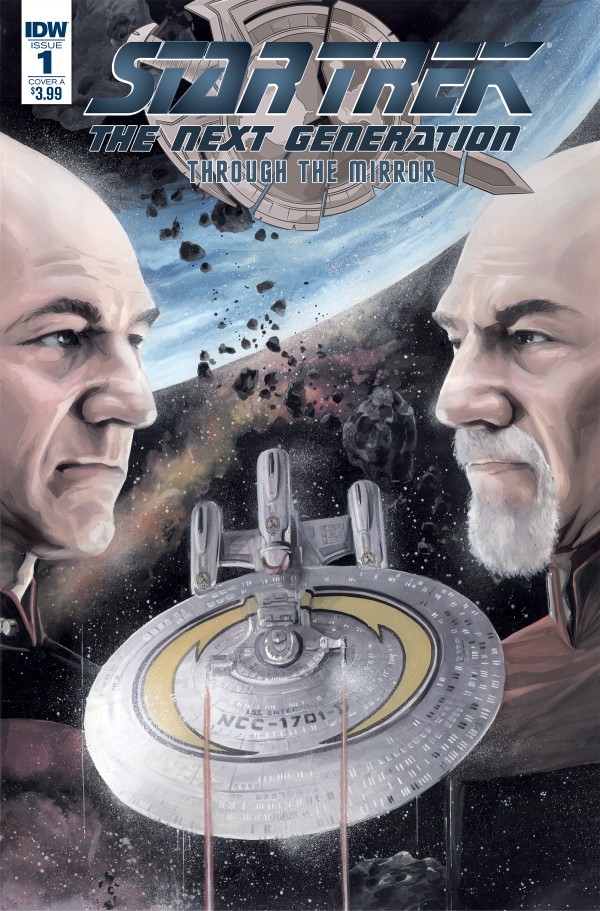 Vengeance is a virtue in the mirror universe in Star Trek and this return to that place in this comic by the Tiptons and J.K. Woodward is not only expected but demanded.

But damn it – the Tiptons and Woodward make a hell of a team.

First of all, they know each other’s work styles very well, given the successful run of “Mirror Broken”. An amazing award-nominated series that gave Trek fans the chance to see how the mirror universe would function as a story setting for the TNG captain and crew, now there’s a return and even better: a match-up.

Second, this first issue seems to promise fans everything they want to see: great art and a duo of writers who know this fandom so well and have experience in writing the characters.

I hate to give up spoilers, but there is a scene when the prime universe TNG crew gets a glimpse of the escaping Mirror universe representatives and it’s a moment that holds great storytelling anticipation. Trust me: you’ll want to add this book to your pull list, even if you have the slightest interest in Star Trek.

But it’s my Pick of the Week. I mean, come on! The Mirror Universe remains one of the greatest story settings for Star Trek, even to the fact that it was the resting point for the first season of the newest television incarnation, Star Trek: Discovery.

Both David and Scott Tipton know their stuff. I’m not talking just canon though, I’m talking character. There’s a lot of mannerisms in the characters’ speech and I know for a fact that Scott Tipton enjoyed the chance to write Worf again. That love comes out in their work. But it’s the fact that J.K. Woodward also knows the characters so well that their physical mannerisms come out so clearly in his art. Even the over-the-shoulder casual glance that Mirror Ryker gives to his pursuers in one of the last panels is testament to Woodward’s attention to detail and familiarity with fabric of this franchise.

There are times when I want revenge so much. I’m Scottish – we’re a very petty people at times. And I Know that this is a lesser thing in terms of humanity’s development. The Mirror Universe looks at the worst of Humanity’s features and presents them as an allegory for the rest of us to see how bad people can be. That was Roddenberry’s intention in the first place and maybe it’s something I need to learn.

… But there are a few people I’d like to see suffer.

However, in the meantime, I’ll just continue to read great Star Trek stories from Scott and David Tipton and J.K. Woodward and try to learn to be a better person! Until next week!

Pick of the Week: Star Trek: The Next Generation – Through the Mirror #1