At what point in a story does an adventurer know fear? 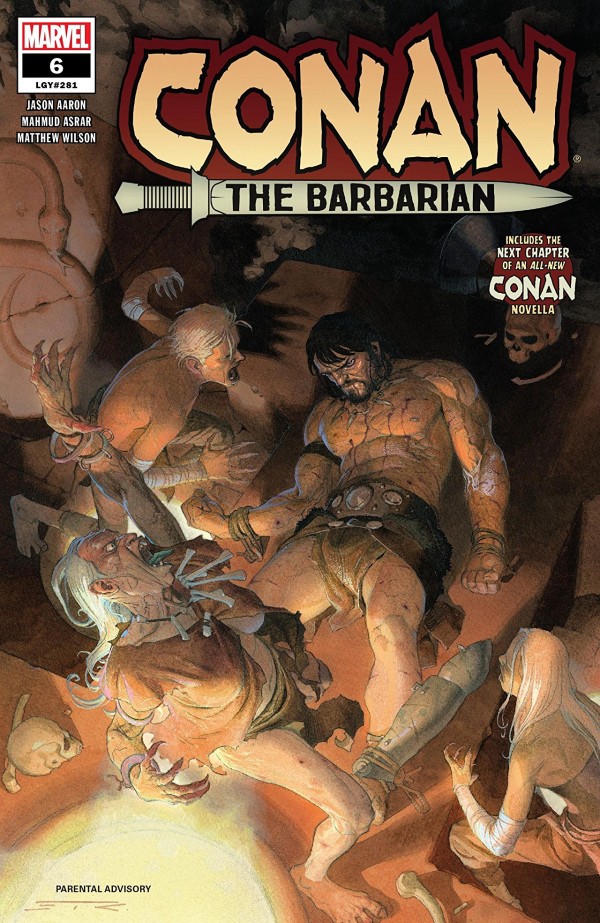 If it’s Conan the Barbarian we’re talking about, Jason Aaron certainly knows that moment … but would it make him less of a poignant character if he told us when it was?

In Part Six of The Life and Death of Conan – “The Sole Survivor”, Conan finds himself in the position of rising from being a servitor of men to a leader of kings. He owns nothing, makes no excuses and earns glory by vanquishing his enemies in a bloody blaze of gore expertly drawn by Mahmud Asrar.

No … and it’s why we read this story. Conan is far from a hero; what he does in battle he does for himself alone. There is no room in his heart for his fellow man or for fear. Every day is a battle for Conan – not just in terms of physical combat, but as a freebooting wanderer and the last of the Cimmerians, Conan owns nothing and is at the mercy of the elements and his uninterested and uncaring god, Crom. He has to contend with everything the world can throw at him with no hope for rest or comfort. Conan has no time for fear.

Unlike us, of course. Compared to Conan, we have homes and shelter from the rain. We have clothes on our backs and time at our disposal to ponder the loss of these things. We have time to meditate on our failures and our shortcomings and we understand our limitations and our vulnerabilities.

That is the attraction of Conan. We can read about an adventurer who knows no fear because he simply hasn’t time to consider his weaknesses. It is kill, or be kill and Jason Aaron has presented us with a story where events happen so quickly that Conan’s decision-making simply isn’t presented to us. His dialogue is short because it needs to be. His interaction with his “betters” is characterized with a brusque dismissal which is often misinterpreted as contempt. Conan simply hasn’t the time or the inclination to deal with these slaves to luxury because they, like us, have never had to struggle like him.

Conan meets with King Yezdigerd, who is not only amused by this upstart mercenary who is unafraid to speak his mind, but is also appreciative of the only man to survive the dreaded Stygian assassins who have time and time again, thwarted his armies in their attempted conquest of this desert land. When a nobleman takes offense to Conan’s words and demands satisfaction, Mahmud Asrar draws Conan’s response to this challenge in such an impassive and cool manner that the panel could be titled “Inconsequence” and hung in an exhibit on the theme. Without a weapon in hand, Conan easily brushes of the challenge as if it didn’t matter. Except to the King, of course, who rewards Conan for his attitude than for any service he has – or may – yield in the future.

But this is how Conan lives his life. Drenched in blood and fighting for his life against overwhelming odds one moment and then the next, he’s a general at the head of an army.

For those of us in our pampered lives, this is fascinating. There’s no way we can even begin to understand his way of life and it draws us. Like a moth to a flame. It is completely compelling and demands our attention and forces us to think about our own way of living.

However, for those who have known trauma and struggle in their own way on a daily basis, Conan is no mere adventurer. To these readers, he is a hero.

Conan’s sense of will is so strong that he powers his way through life. While he has to, for sure, the alternative is to simply give up and die. His will to live is so strong that the alternative is not even a passing thought. However, in contrast, because he has delivered so much death in an attempt to keep himself alive, he has earned the attention of the Cult of Razazel, the Death God. His life force is vibrant and made stronger by this struggle … and he has been marked for sacrifice.

This is the type of long-distance plotline that readers can appreciate. As Conan never thinks about his next step, Aaron has crafted a wonderful possible threat looming for him down the road. How will Conan’s will to survive express itself in the light of this inevitable battle? Given the prize and its intensity, it promises to be an entertaining story.

Conan is not a thinker; thought gives way to fear and while this is a source of strength for him, it is also his tactical undoing. He is a sheer force of will; a living embodiment of resistance to death and survives in the harshest of moments. These moments make for drama but also for the story equivalent of a deathly fearful roller-coaster ride which we are on with him. Unlike Conan, we do fear and cannot affect the outcome but must hold on for dear life as we watch the Barbarian out-muscle his way to surviving whatever Aaron and Asrar can throw at him.

… but he won’t fear it. How comforting would it be to not know fear like Conan?

Hero or adventurer – whatever he is to people, this week, Conan the Barbarian #6 is the pick of the week.

It’s a textbook story of fantasy wish-fulfillment. Aaron knows how to write one and Asrar clearly knows how to visualize it. Conan is the type of character we all wish we could be and are barely brave enough to do so.

May your next week be filled with brave choices without the chance to fear them.

Pick of the Week: Conan the Barbarian #6