I’m exclusively reading DC Comics this week. In the last three years that I’ve been writing this column, I don’t think this has ever happened.

Are there numbers? I need numbers. Well, according to Comichron.com, March saw Marvel earning the number one position of most units sold with Amazing Spider-Man #25 (which retailed for $9.99) and saw three other titles in the top ten. However, DC took 5 of those top ten positions with Image snagging only one berth on that coveted ranking table.

When I look at February’s figures, we see Marvel with the number one selling title position again, with Darth Maul #1. Yet DC managed to take seven out those top ten positions!

I’ve seen a similar sort of pattern with the choices I’ve been making for the picks of the week. DC has been taking the lion’s share of that distinction lately and it’s like DC is managing to flood the market with a great deal of quality books. While Marvel may be taking the number one selling comic and winning a battle, it’s DC that’s managing to win the war.

I’m really curious to see what the month of April will bring to the market.

So let’s take a look at the selections from the only publisher that made my list this month. 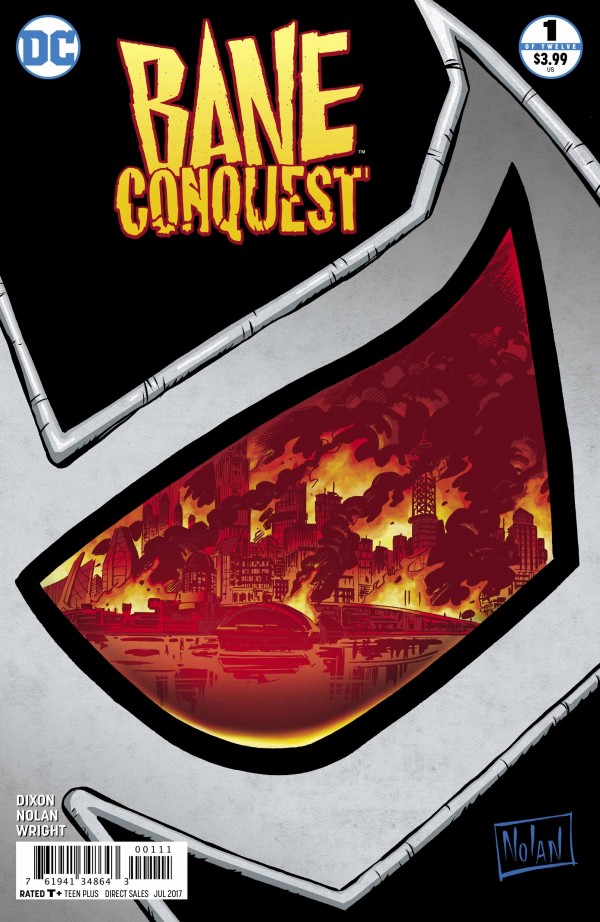 Hmm … this was a bad one to start with because it really didn’t seem to fit the criteria of quality that I was just hyping. I think after Tom King’s amazing treatment of Bane in the “I am Bane” story arc in Batman. That’s a title that has taken the honour of being our pick of the week quite a few times in succession.

Of course, that’s the reason why I’m probably disappointed with this title. After all, that’s a hell of hard act to follow. The catharsis of that storyline probably exhausted any character stopping power that Bane had for a while. After all, how could Bane recover to be any sort of a threat after that epic battle? It’s too soon for bane to be featured in a single story of his own.

The other thing that struck me with this book was the fact that Bane had a posse of minor super-villain henchmen who seemed too loyal; too bonded together into a team that worked together so effortlessly. Bane isn’t the sort of villain who inspires that type of teamwork and I had a really hard time accepting that he was that type of tactician. Also, when you see how easy Bane gets taken down in combat, it’s the reduction of this master criminal’s intimidating power that really affects the believability of the storyline. 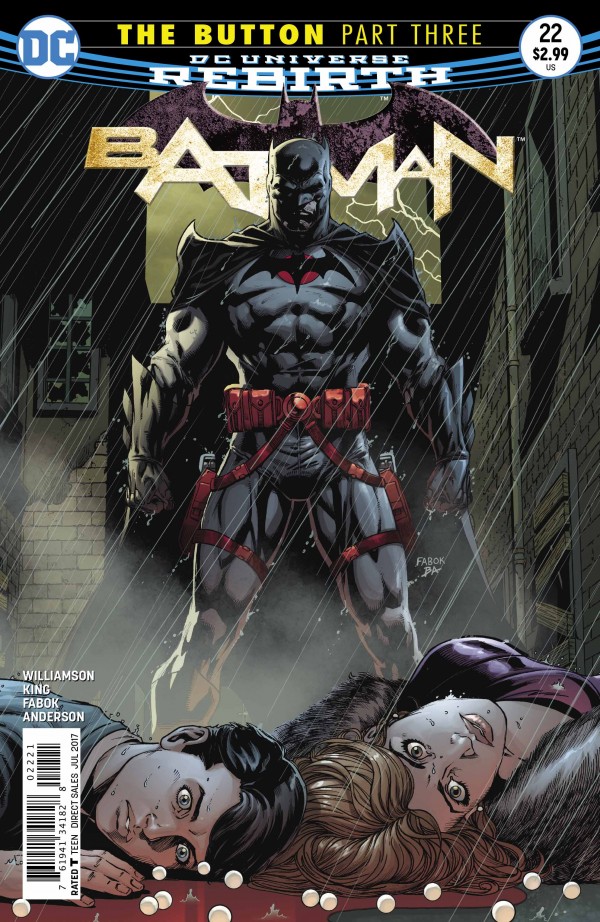 Then, of course, we get to Tom King with part three of the arc titled “The Button”. Say the devil’s name, and all that …

Geez, this is such a busy book. Of course, the emotional overtone of this storyline with the reunion of Thomas and Bruce Wayne is a very powerful one that plucks at the heartstrings of any parent or child missing the lost other. But the connection back to the Watchmen and Flashpoint stories are also a wonderful overlay to frame the action of this book that makes you ask more and more questions.

I love the cover of this book! Rich and emotional; it’s a maelstrom of feelings and is the perfect invitation to read this comic.

Tom King and Joshua Williamson have done an excellent job of making you want to turn the page and find out more and more, yet they keep enough of the information away from the reader in a classic Scheherazade that they have assured DC sales of this title into the upcoming months. Jason Fabok’s art is dynamically scintillating and if the team on this book can manage to deliver this type of intensity, then the April and subsequent months are going to have a new number one book in their lists. This is a winning title and a must to read. 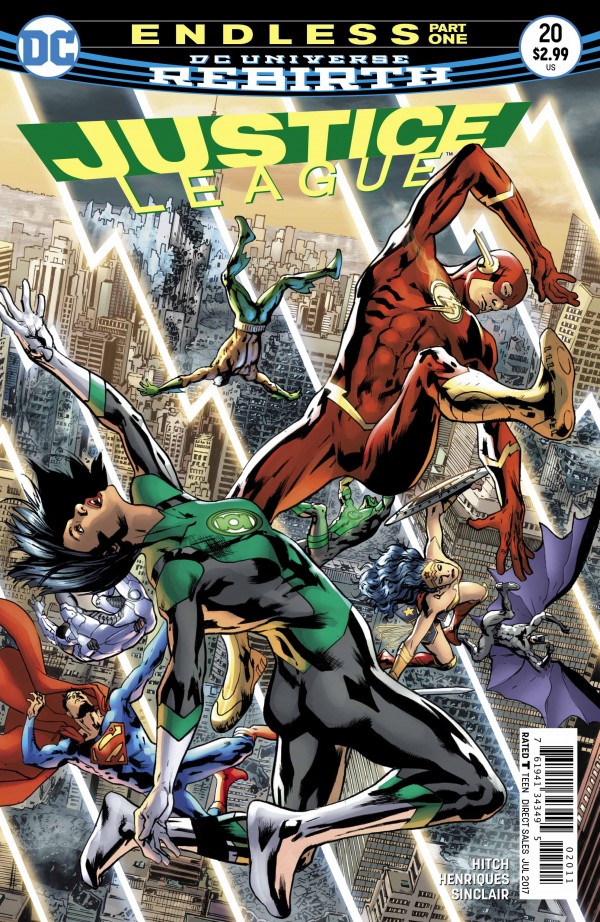 I haven’t really been very successful with Bryan Hitch’s work in the past, but Part One of “Endless” I didn’t mind so much. In this issue, the Flash is trapped in a sort of time-loop while he tries to resolve the reason why. Every two or three issues he goes just a little further in time to gain a little more information until he arrives at the crucial point.
I can’t say that I was overwhelmed but it was a different story-type than the cosmic-level threats that Hitch has levied against the league in the last few arcs of this book. While I found that refreshing, I still wasn’t as entertained as I should be by the Justice League. 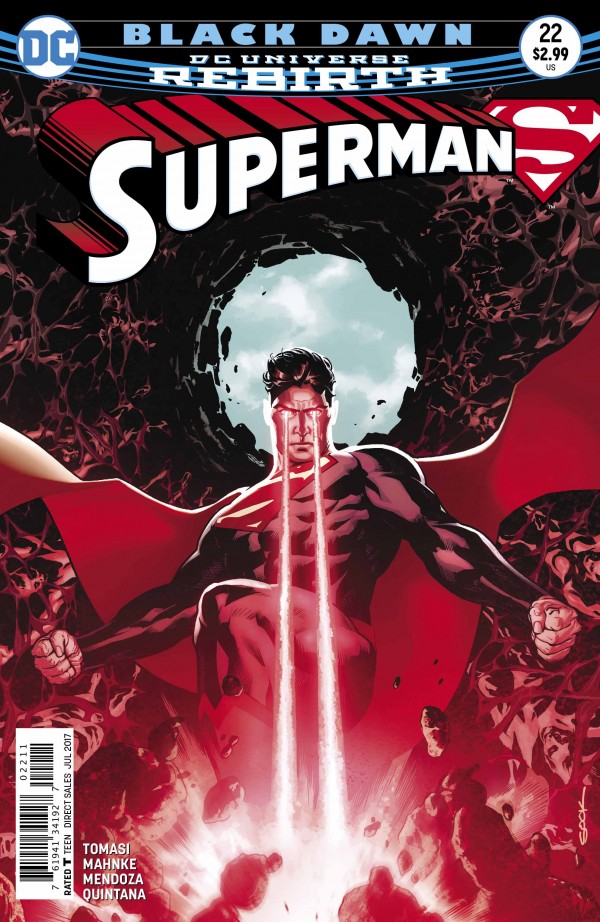 “Black Dawn” Chapter Three sees a wonderful exclusive focus on Lois Kent – alone and with no-one to rescue her from the sinister forces that lurk in the shadows of the Kents’ sleepy little town, this book takes on a darker tone than I’m used to in a Superman book.

However, I was really surprised by the dark path that Peter J. Tomasi is taking his readers down with this storyline and I, for one, am really enjoying where it’s taking us!

Tomasi has a mature and thoughtful perspective on the Big Red “S”. Instead of the super-powered boy scout that is the traditional way that writers portray Superman, Tomasi makes his more reflective and curious while also possessing of a wisdom and intelligence that is often supplanted by a overpowering sense of morality. People forget that Superman is able to operate alien technology light-years ahead of Earth’s and also has a greater awareness than he is often given credit for.

I found myself completely drawn into this book. I am dead curious about the town’s nature and I was especially entertained by seeing how resolute Tomasi portrayed Lois. I like her as a wife and mother. It gives her more depth than just a nosy reporter. It’s refreshing to see the reporter side of her accentuate this new identity and somehow is makes her more dimensional.

Doug Mahnke’s art is superb. Clean and dynamic lines – this is the type of art that should be present in a main character’s book. All in all, a great book, and definitely one worth picking up.

The Fall and Rise of Captain Atom #5 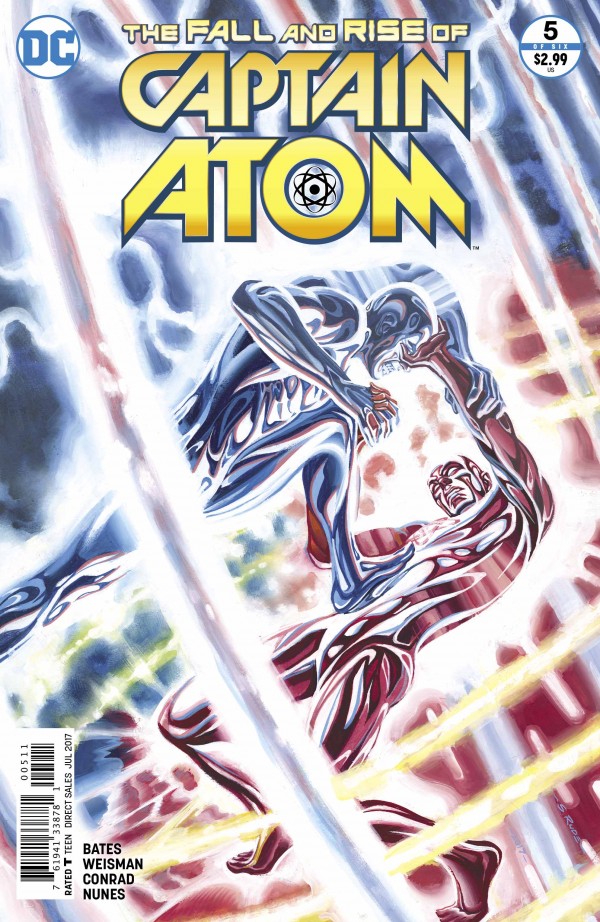 I’ve been curious to see how this book would turn out. Will Conrad’s art is really crisp. I love the definition of his figures and the tightly focused activity in the frames that heighten the sequence of the storytelling. It’s a wonderful complement to Cary Bates’ rhythm in relating the unique take on this renewed character.

Still, I can’t help but feel that only six issues to tell this story isn’t enough to resolve the many plotlines that Bates has in this series. Let’s list them off: 1) Nathaniel Adam’s time displacement 2) the son he needs to reconnect with 3) the existence of a new super-villain 4) resolving differences with General Eeiling and his new responsibilities – how is Bates going to resolve all of these strings with only one issue left?

I fear that there are more angles on this story that Bates can handle.

I’ve always loved this character and I’d love to see it get the treatment it deserves and Bates is an enormously talented writer. I just hope it works out.

So while Batman #22 is the clear choice for Pick of the Week, I’m also sending a shout out to the editorial direction that DC is going in. Not only are they managing to maintain a fairly high level of quality story-telling, they’ve managed to do it for a good length of time. Whatever is in the water cooler in those offices is definitely working.

Hey – perhaps it’s the decision to get more reviewers actually reviewing and pumping the hype over their books? Could be – I mean, it’s not like I have the largest readership in the comic reviewing world, but damn, do you see any Marvel books on my list?