Short and sweet this week, loyal readers! Yours truly will be off to a convocation of comic-con goodness this weekend in none other than sunny Orlando for MEGACON, 2017! I will have the good fortune to be moderating the likes of Bob Layton, Jason Aaron, Mike Zeck and other greats.

MegaCon is the largest Comic Convention in the South-Eastern United States. With numbers reaching the neighbourhood of 100,000 plus, it’s a thing of wonder to see the draw that comics and other geek-cultured entertainment brings. Yeah, you could argue that these things used to be done purely by volunteers, but let’s face it: there’s always going to be a commercial aspect to everything that attracts a great number of people to one venue. Why should cons be any different?

Still, I can’t deny that I love comics. To talk with creators about their work is every comic fan’s love. So of course, the chance to meet these talented creators and understand more about their process is a joy worth investing in. 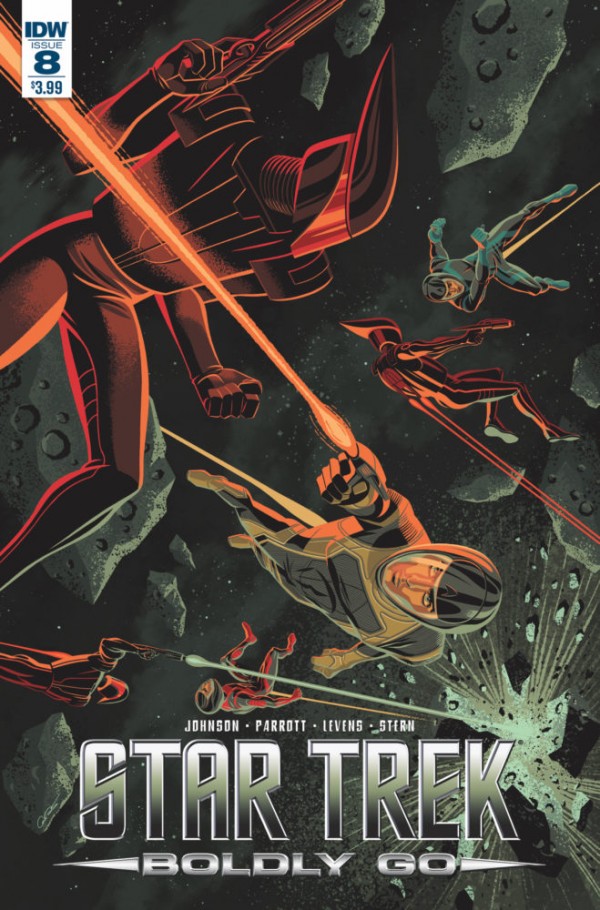 This is the conclusion of a two-issue arc that sees the Federation and the Romulan Empire on the edge of a diplomatic détente that can go either way. As much as I am not a Kelvin Timeline fan, I have to say that I am actually enjoying this interpretation of Trek. The Zero-G combat scenes are enough to make me really get into this book.

I miss William Shatner as Kirk but we are all mortal and we age. Some of those original actors are no longer with us and are starting to succumb to time’s inexorable march through the years. However, I just wish that that there could be more of that age reflected in this version of Trek.

Still, Ryan Parrott and Mike Johnson give us a damn fine story with this book. There are new characters to enjoy, and the Federation is at a different stage of relationship with their Romulan neighbours. Instead if being in a sort of interstellar cold war with them, they are approaching a stage of détente, which is something that hadn’t been even considered until the era of Deep Space Nine. Of course, the early encounter with the Borg about a hundred years beforehand would have been enough to for anyone to start looking for friends. 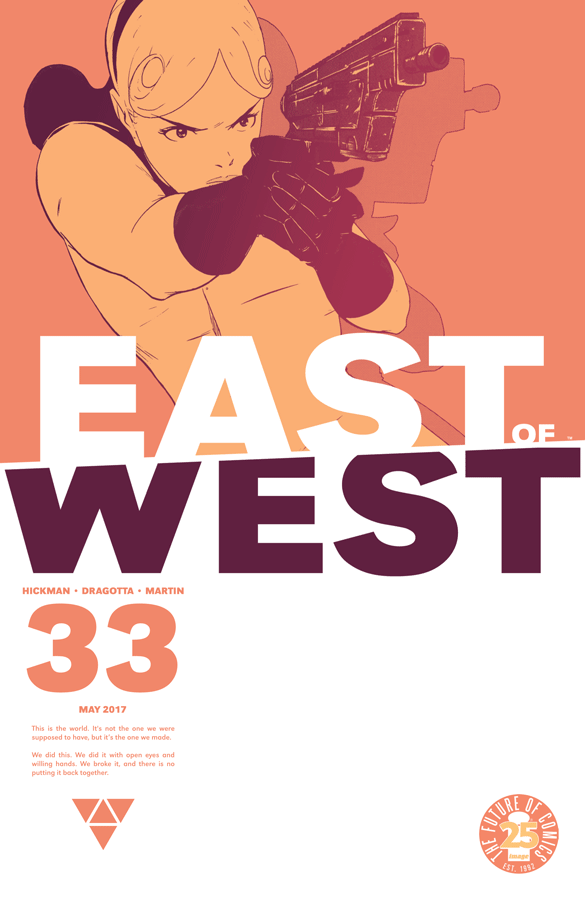 What else can you say about this book other than the scope of its fantastical dystopic imagining is beyond the limits of anything that has even been visualized in the comic medium. It’s truly a unique piece of work that demands its own omnibus in the far future. I have the first two hardcover volumes in my library and I still continue to collect the individual comics. Why? Because its such a compelling read. You need to buy this book simply to see what Hickman and Dragotta have managed to twist and warp in the alternate future they have created for us.

But it’s the alternate religions, the different cultures – all of this careful attention to detail that makes their worldbuilding skills so pronounced and epic. In this issue, the Kingdom of New Orleans needs to carefully decide what path to take and which side to back. Their support could tip the balance and there are a number of factors to consider. It’s an eye-widening, spectacular marvel of a series and I am still agog at its longevity. 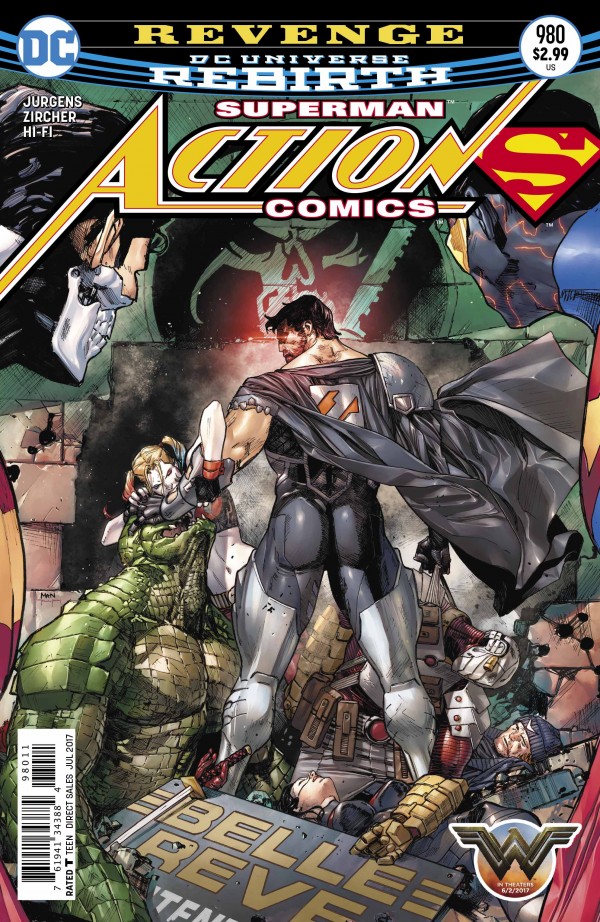 I can’t believe I’m reading Superman again. I really haven’t been a fan of Superman since Frank Quitely’s All Star Superman – and that was ten years ago! I have Patrick Zircher and Dan Jurgens to thank for that.

Rebirth has been good to the Man of Steel; at least in my view. It’s been a chance for Superman to reconcile (and retcon) his legend in the last twenty years and in the process, hook new or curious readers like me.

Dan Jurgens has done a great job of reintroducing the new “family man” Superman to the 21st century. In this issue, we see the new iteration of the Superman Revenge Squad and these guys had their heyday way back in the late seventies. Well, I’m sure there were a few hiccupy appearances since then but that’s the last time I remember them being a real, veritable threat. If there’s anyone who can reach back and draw these guys into the 21st century and make them a truly exciting set of adversaries for the Man of Steel, then its Jurgens.

Of course, the days of Curt Swan’s art are properly revisited with Patrick Zircher’s art. Zircher does an incredibly vivid job of making Superman relatable and heroic at the same time. Plus, his renditions of the Superman Revenge Squad are truly terrifying. There’s a real storm brewing with this issue and it’s definitely one not to miss. 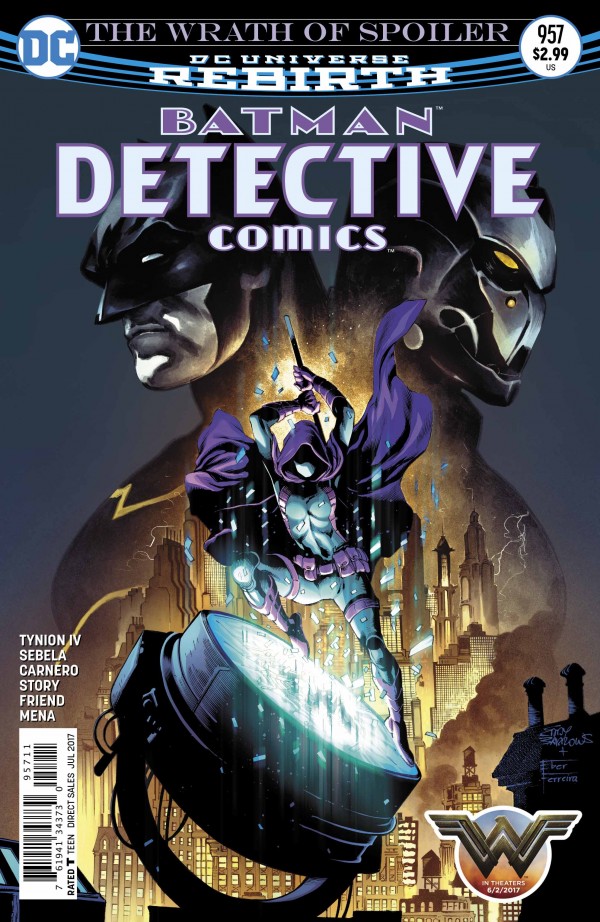 A bit of a divert from the usual path but instead of Batman crashing through windows to the rescue, this time it’s the Spoiler!

James Tynion IV and Christopher Sebela deliver a great little one-shot story about a hero coming to the grips with an identity issue that actually grapples with a real-life issue: comic heroes are so overdone; why can’t normal people feel empowered in dealing with the predators? With a little help, sure, but there’s no need for flashy super-heroics. Sure enough, in this story, that’s exactly what Spoiler tries to do.

This is an introduction to the art of Carmen Carnero for me and I have to say that I’d love to see more. Action is definitely Carnero’s strong suit and there’s a lot of it in this story, that’s for sure. 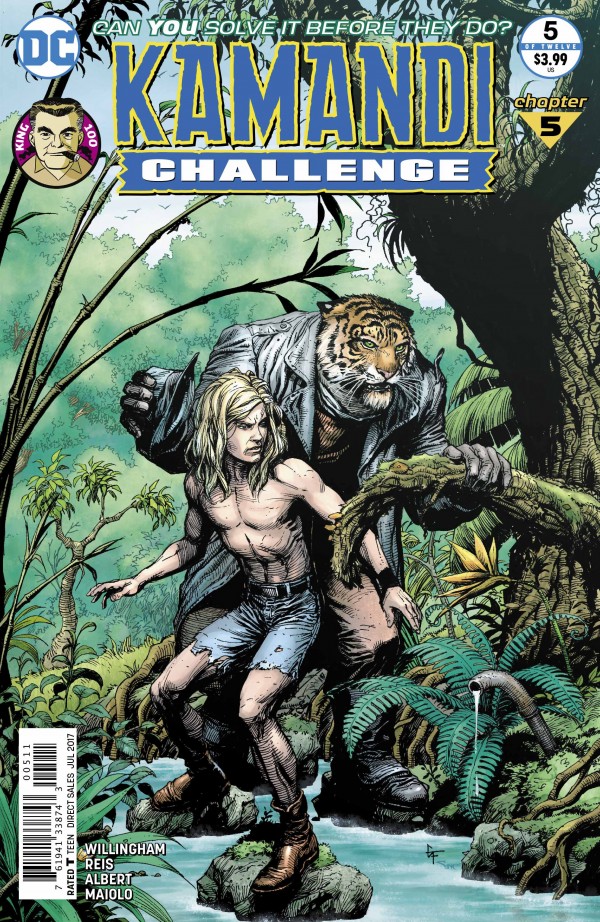 It’s a real joy to see the level of innovation that the DC stable of writers and artists can come up with. What really astounds me is the level of intensity that is required to be able to create a new episode every and to see that effort properly realized every month.

Oh, my God – one of my favourite comic creators, Bill Willingham, is the writer for this issue! Backed up by the amazing Ivan Reis on pencilling duty and that’s a winning combination that holds an incredible amount of promise for me!

Sure enough, this is a story that does NOT fail to entertain! In this issue, we see Kamandi lose and gain a friend. While one saves his life, the other holds promise to do the same in the future, if the last boy on Earth can survive the shocking cliffhanger Willingham has invented for our hero this turn around!

But it’s the relationship building that really endeared me to this issue. Kamandi is on his own, and if there’s one thing this character needs is an ally who not only accepts him as an equal in this evolved animal dystopia, but who can also educate him as to its strangeness. In a very short period of time, Willingham manages to give him an ally who can do all of that while also being a dependable friend who can be there when he needs help. Friendship is such an under-rated story angle because of the universal appeal it holds to such a large section of the potential reading audience. It’s a basic theme and when well-employed, it carries the essence of such a powerful story.

If there’s anything Willingham can do well, it’s fantasy. Just look at his run on Fables to get a sense of his talented imagination. This pulse-pounding issue is only a small sampling of his abilities and when you consider that this is a book under pressure – whoa. Ivan Reis is not to be left in the corner either. His work is always spectacular and he brings new definition to Kamandi. He captures his youth and his innocence perfectly as we remember that though the legendary Kirby drew him as a muscular youth, he still looked fully-grown. Reis manages to accurately restore that quality to this hero. This is definitely the pick of the week this time around!

In this issue, we see non-stop adventure, Kamandi bouncing from place to place as he tries to make sense of this new world that he has woken up in. I’m waiting for the OMAC I remember along with other memorable allies to show up and rescue Kamandi! Willingham and Reis get the nod for this week’s incredible effort in putting together such an incredible story and measuring up to The Kamandi Challenge for this month!

That’s it for this week. Now I have to start packing for the upcoming MegaCon and begin the internal debate over what to sacrifice for space in the suitcase: clothing or books to sign?

Pick of the Week: The Kamandi Challenge #5