There’s much that I’ve chosen to read this week. On top of my reading I’ve had to deal with the fact that this has been a week of geek developments that have unduly taken my attention away from comics.

However, there was one announcement that caught my eye that doesn’t detract away from the focus of this column. ComiXology (www.comixology.com) announced an unlimited comic bundling service of titles from Dark Horse and Image Comics to start immediately for only $5.99 a month. With the amount of attention I’ve been giving to Image in this year alone, that’s actually a heck of a good deal. With the versatility of reading comics on various platforms, well, forbid me from writing a commercial, but unlimited comics for $5.99 a month with a thirty-day free trial is a good deal. I don’t read a lot of Dark Horse titles any more, but it’s worth it for the Image books for sure.

The other thing that I’ve been following is the guest list at San Diego Comic Con this year. Though the list of guests will undoubtedly get bigger as we get closer to July, I’m a little underwhelmed by the confirmed allotment so far. As much as I respect all of the creators – even the ones whose work I’m not familiar with – I have to say that I’m still hoping for a little more “wow” factor. The DC Rebirth event would be good to promote and given that this is the 50th anniversary of Star Trek, I thought that IDW might pull more of their Trek talent into the mix. For one, I’d love to meet John Byrne and get some signatures of the many Star Trek comics he’s worked on for them.

Just some thoughts before I get to the list. 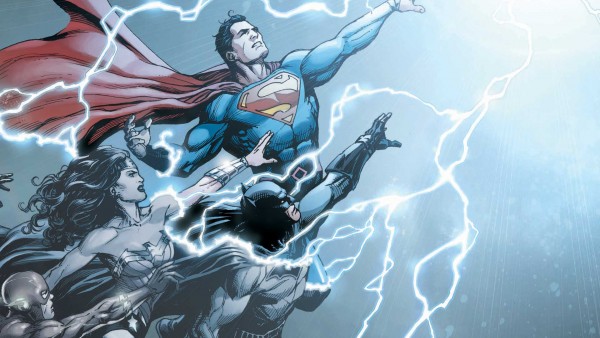 Yeah, I’m just going to start with this one here.

You are in for a real treat. There was a definite “Crisis” feel to it, but I have to say that it was representative of the superior way Johns and his team crafted a story that successfully worked in the many incarnations of the DC universes to date. It is an outstanding piece of storytelling.

When DC first created Earth One and Earth Two back in the early issues of The Flash, it was originally intended to explain how the older generation of the DC stable of heroes could simultaneously exist on the comic shelf with their younger counterparts. However, it took on a life of its own with advances in physics and science fiction story-telling, and more Earths began to appear.

The Crisis on Infinite Earths saga sought to unravel the mess of different universes by paring them down. However, it has always been easier to destroy than create, so the stories that began to appear after the many Earths were destroyed seemed pale in comparison. So Infinite Crisis, Flashpoint, the New 52 and all the other attempts to address the rift in the continuum were not regarded as high points in DC storytelling. They were flawed in some way.

However, Universe Rebirth might have an answer to this. If you look at the way the story is introduced, it builds on familiar and successful structures from the original Crisis. There is a definitive sense of foreshadowing with the mention of the different universe events and the sense of a solid story in the making.

The beginning also hearkens back to a time of when DC was on top. There’s a 1980’s flavour to this book with the hints of other successful DC titles from that time. There’s also a lot of respect for the history behind this comic; you immediately get this as soon as you look at the first page.

I don’t want to reveal too much but it was really fun to watch. 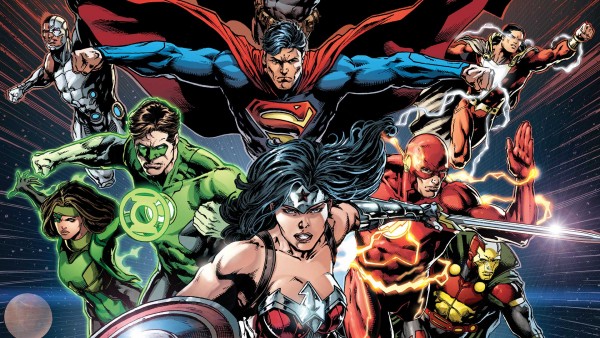 I can’t say that I was really turned on by this book. It was solid – don’t get me wrong, and who doesn’t love a good super-hero donnybrook? The art is amazing and it’s great storytelling, but I have to say that I felt a bit let down. After all, one of the first questions Batman asks the Mobius Chair is what is the Joker’s real name? It’s fair to say that there was an expectation in the last issue of this arc that didn’t get met.

Yeah, we don’t get the Joker’s identity. I’ll spare you the answer that Batman did get, but the big story hole for me is that isn’t the way that the Mobius Chair works. You ask a question, you get an answer. 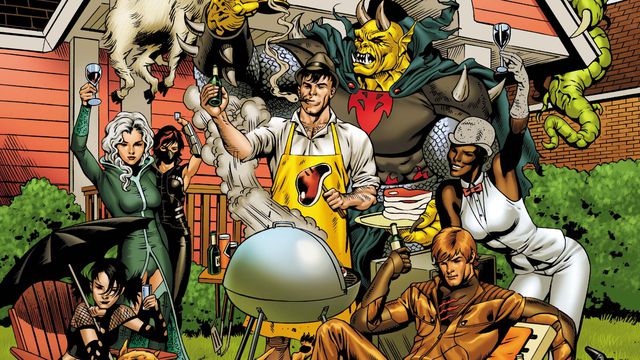 Good-bye to a book that was just beginning to see some serious development. Despite that I loved that this team came together in its last moments, I have to note the exception of one character who returned to her criminal origins. Unfortunately, this didn’t add anything to the story and I have to say I was puzzled why it was there. It was my major complaint of the book in addition to the fact that this book is finished. Too bad … why can’t I have nice things? 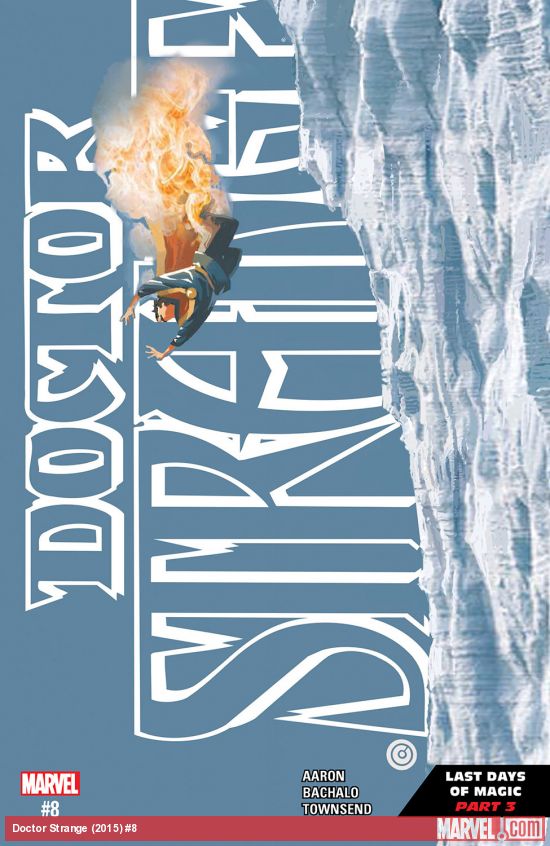 Again – the art on this book is not up to the epic standards of this classic character. I love that Jason Aaron has included more of an irreverent tone, but it’s one that doesn’t detract away from the colossal responsibility Stephen Strange has on his shoulders. He is THE Sorceror Supreme and while Aaron doesn’t write Strange in weird and mystical ways, we still get the sense that this is a man who is an expert in his field … but just doesn’t brag a lot. He’s the epitome of the modern professional: the man who says nothing about his job, yet still gives off that executive air and presence. 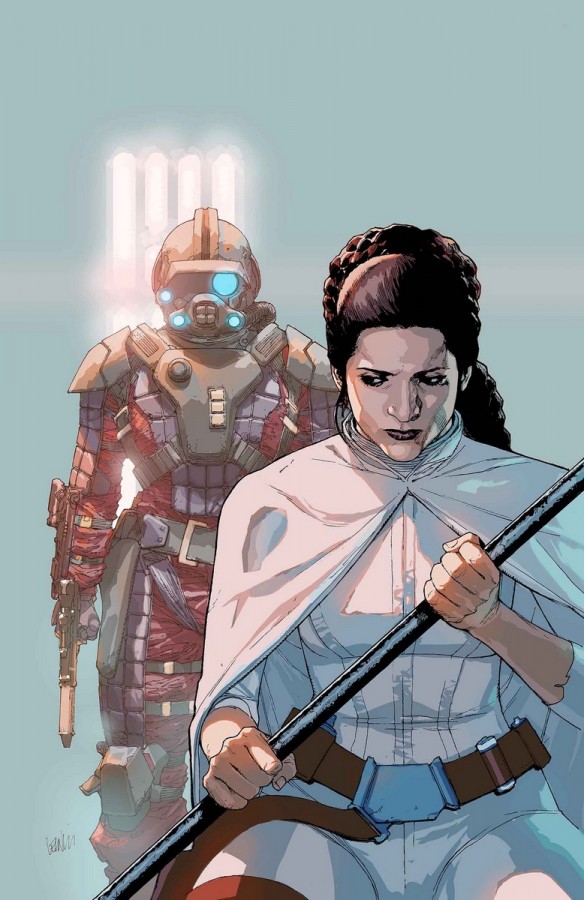 A conclusion to the “Rebel Jail” arc. Again, Aaron shows his ability to take a regal and privileged character like Princess Leia and convey her as someone who’s ready to get her hands dirty and lump in with the rest of the rank and file.

The one problem I had with this book was the art. Although Lenil Yu’s pencilling is really sharp, I think I had an issue with the colour palette. It seems fairly dull and uniform. I can’t say that they did a lot for the story and I found the book fairly boring to look at, sad to say. 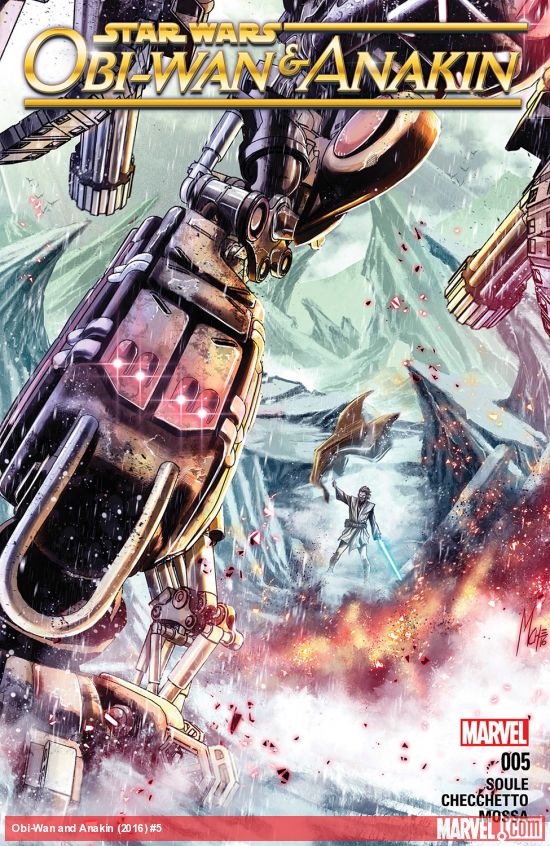 Well, that’s this one done. Yup – the next one in the cycle is Han Solo, but I think I’ll miss it. I mean, I find that the focus on the Star Wars characters has either been hit or miss. The ones that miss the mark are somewhat forced. I found Chewbacca like that and to an extent, so is this book.

Prequels are difficult to write. After all, you know the ultimate end of the story so there really isn’t a lot of room for surprises. When there is a lot of interest and a lot of unknown information, that’s when you’ll find successful prequel stories. 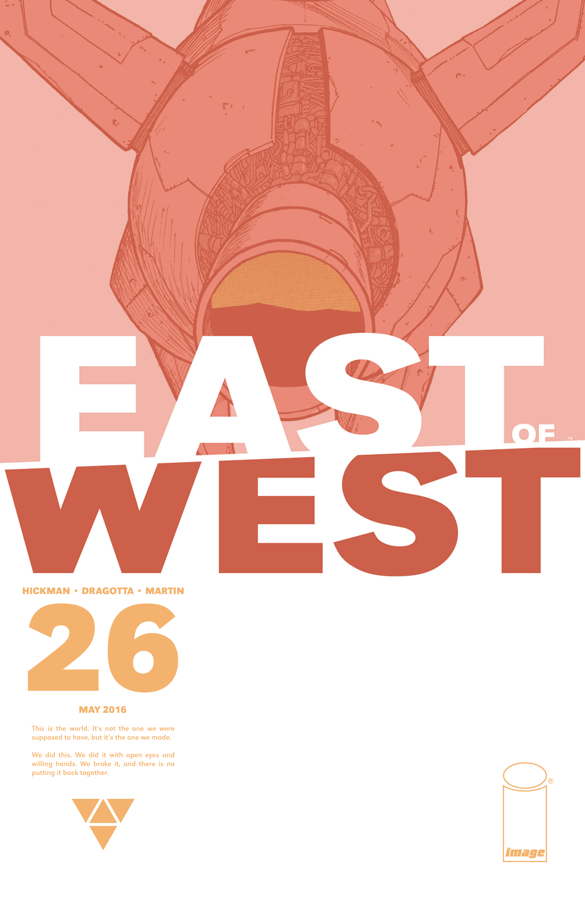 Staggeringly good. Things are really rising to a crescendo although this story is on such an epic scale that it’s difficult to tell if it’s just a minor arc or what. The Year One Hardcover is currently out in stores, so this is a good opportunity to catch up on previous titles. In fact, in one of my earlier reviews, I maintained that the best way to read this story is to read the individual issues en masse in a hardcover format. Well, there’s my wish – and it’s sitting on my shelf as you read this.

This is a book that needs to be savoured and pondered. It’s an amazingly intelligent read, particularly when you take into the strategic and political machinations of all the different nations in addition to the prophetic side of the unseen players in the background. It’s a book that can be enjoyed on so many different levels. If there are only a few comics you are reading this year, make this one of them. 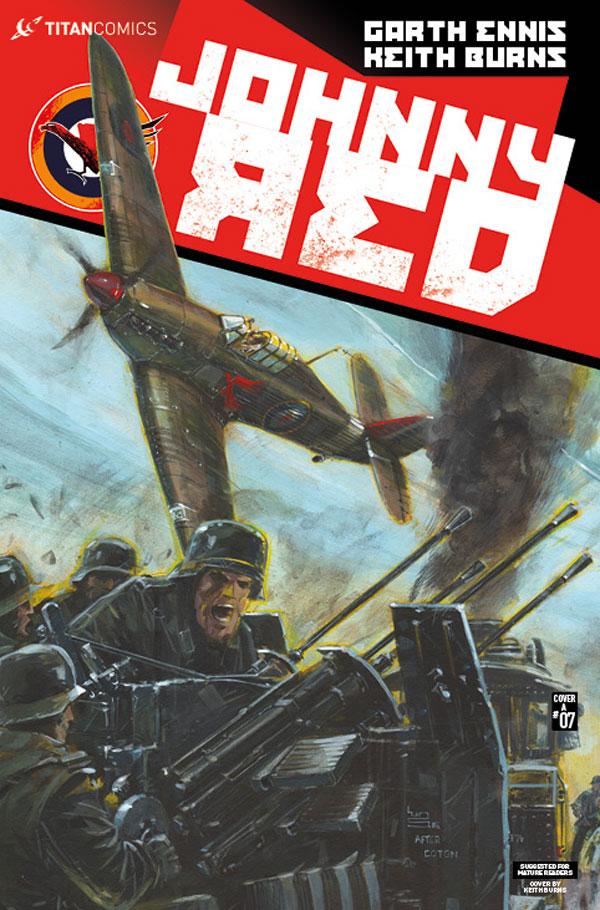 My childhood brought forward for the adult in me to enjoy! Although I wouldn’t have seen phrases like “verdammt Englisch arschloch”, it is probably the best way to describe ex-pat RAF pilot, Johnny Redburn.

An interesting feature that Garth Ennis incorporates into this book is the inclusion of World War Two history essays on World War Two militaria. This month includes a brief overview of the Soviet secret police – the NKVD. There is also a technical description and short history of the Luftwaffe’s main fighter, the Messerschmitt BF-109. This was a feature that I loved about reading British World War Two comics and it’s clear that Ennis enjoyed it too.

Great story and kudos to Keith Burns for accurately capturing the essence of the Johnny Red I remembered reading!

Well, with apologies to Masters Ennis and Burns (as I think this is the first time I’ve not listed them as my pick of the week), I have to give the nod to Geoff Johns and his team for their work on DC Universe: Rebirth #1.

Like I said, it deftly weaves a story out of the chaotic mess the DC Multiverse has become. Johns has done a lot of work to restructure this universe and while this is only a first issue, it seems like he has a solid and working plan designed to bring some order to this chaos. He introduces several characters of note in this new event affected by a constant central character who brings back memories of the most successful event (and ironically the one that started the mess in the first place!) and establishes order and sets the scene for the first comics in this new universe.

I especially love the gathering of art talents in this book: Gary Frank’s incredible cover and interior pencil art by Ethan van Sciver, Ivan Reis and Phil Jimenez. There’s a lot in this book and it certainly does not fail to deliver on an amazing and novel storytelling experience that will certainly change the face of DC Comics in the years ahead.

So that’s it for this week. As we get closer to SDCC, stay tuned for announcements of some of the great interviews we’ve got lined up and who knows? Maybe a significant geek event or two might find their way on to the site!