I spent the weekend moderating comic panels at MegaCon. The two things that came out moderating both new creators and old were: the power of a solidly written story and how much comics have declined in terms of readership.

I hosted creators from the days when comics published 300,000 copies per month (back in the 80’s) and those who were satisfied with cracking a 100K and regardless of the volume of sales, the intensity and imagination of these creators was a thing to “Marvel” at and also lament.

In response to a comment of the sales of a particular comic back in the 80’s, one creator said: “never again”.

I can’t buy into that. I can’t … as a teacher of English literature and a lover of sequential art, I can’t subscribe to the notion that the sales of a medium are what describe its success. Perhaps comic readership is declining, but remember, it was the comics industry that decided to change its sales format to selling to the “direct market” and the 80’s saw a proliferation of comic book stores. Now, I have to struggle to find a comic specialty store close to my neighbourhood, and damn it, if the publishing companies aren’t desperate to make their way back into mainstream sales venues like major booksellers like Amazon or Chapters up here in the Great White North.

But it’s the Jim Shooter maxim that if it’s great storytelling, then it’ll stand out that still resonates within me. For example, Chris Claremont is the definitely arch-mage when I consider the height of Marvel storytelling, and is probably the most recognizable name for me of those “legendary” creators who is still producing current work.

I miss Claremont’s work. There was a time when I would leave school and take a specifically different bus in order to get my comics. Claremont’s name was the name I looked for the most. The New Mutants, The X-Men, Alpha Flight, Iron Fist, – the list goes on. I would look for these titles in various stages of my youth, knowing that Claremont was the standard to which I held other writers to.

Incidentally, it was my pleasure to host Chris at MegaCon in Orland this weekend, and I think Chris misses those days too.

It’s a short list of titles this week, due to the extended holiday weekend, but let’s get to it, nonetheless. 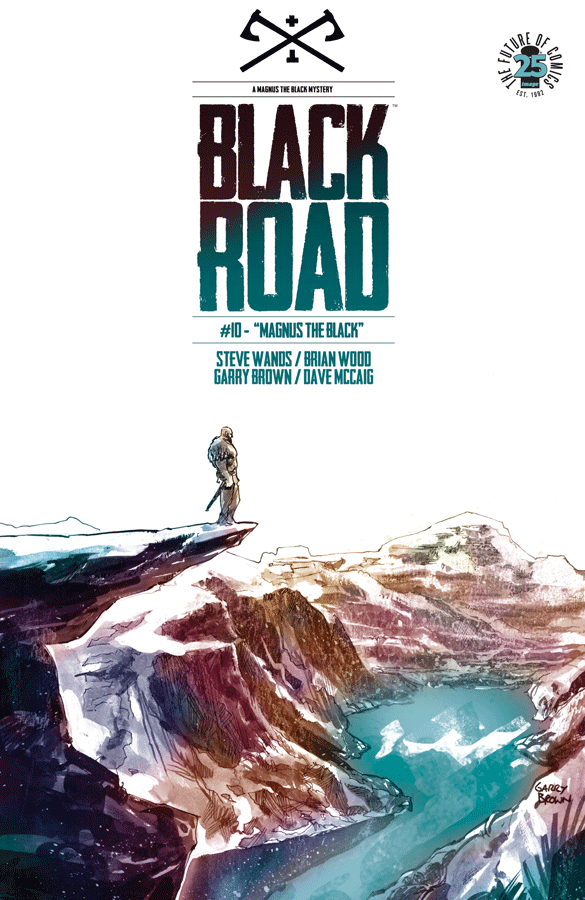 I fell in love with this book when it first appeared on my reading list, but this issue – apparently the end of the story – definitely let me down. I was expecting a greater sense of resolution from Magnus the Black, but he ended his story with a disappointing sense of ennui. It was as if nothing that he did mattered and that the world would continue to grow more and more disillusioned as the centuries progressed.

I don’t need a comic to tell me that we live that sense of dreary reality every day. In fact, that’s why we need comics.

This book had a lot of potential and I’m sorry to see it end so undramatically. 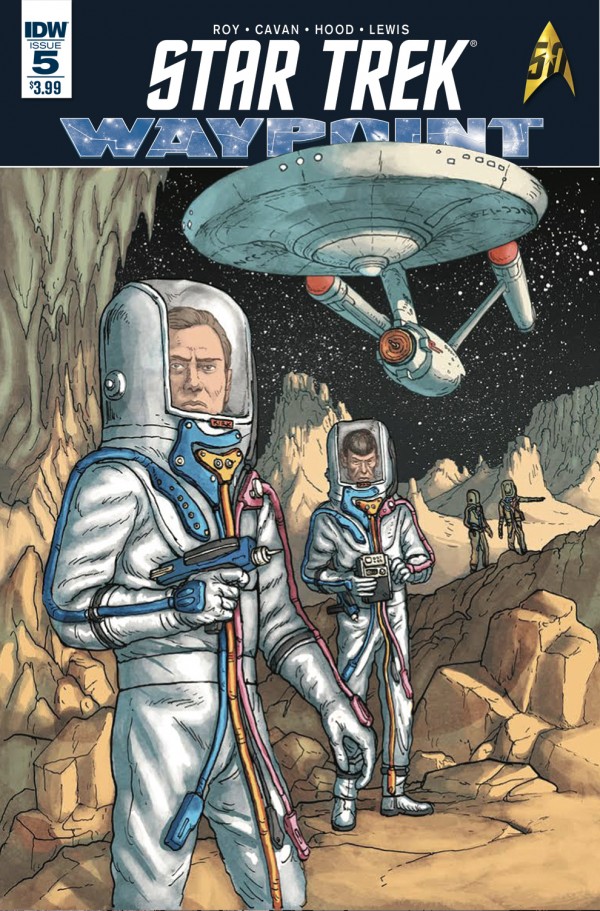 I love anthologies and I love Star Trek – and IDW definitely has the right idea in mind when they diversified an amount of titles to maximize their license and an anthology is the way to go; however, I have to say that I am yet to be blown away by any of these titles so far.

This is a great opportunity for IDW to capitalise on its franchise license and put its best talent on a book that could really shine, but instead, they are making it a “farm” comic for new talent to showcase their abilities in a professional comic label on a high-profile property. While I admire their commitment to new talent, I have to say, the talent doesn’t really measure up to the best that this franchise deserves.

I say that without prejudice; I honestly do – but the problem I have with this title so far is the level of quality that has been produced in this book.

We have two stories in this book. The first, “Frontier Doctor”, is a “Deep Space Nine” story, featuring Doctor Bashir and Miles O’Brien. While it completely captures the relationship between the chief and the doctor, it is fairly quick and done before the reader has a chance to get invested in the comic.

This is not a fault of the creators of this story; Cavan Scott does a good job of constructing a short story that readers can be properly invested in. Though it is brief, that is a function of the amount of pages the writer and artist has to work with. Josh Hood’s art is pretty solid and the two – along with colorist, Jason Lewis – have crafted a decent enough story for Trek fans to recognise and appreciate. It certainly is the superior story out of the book, in considering all of the elements involved.

The second story – “Come Away, Child” is a wonderfully written story by Simon Roy. Set in the TOS milieu, this is remarkable for the fact that it is an ancillary story set in the TOS era that doesn’t involve the Enterprise or Kirk and Spock. It’s a great exercise in expanding the fan’s perspective in the original series franchise by looking at alternate areas, like research stations observing other civilizations and the circumstances around that sort of … enterprise.

However, the art definitely detracts from the good story that could have been. Roy’s style doesn’t match the streamlined, technical professionalism that Star Trek is associated with. It is rough – unrefined and its indy outlook doesn’t fit into the way that fans would associate with Star Trek. It just wasn’t a well-matched pairing and unfortunately got in the way of would have been a very poignant story. 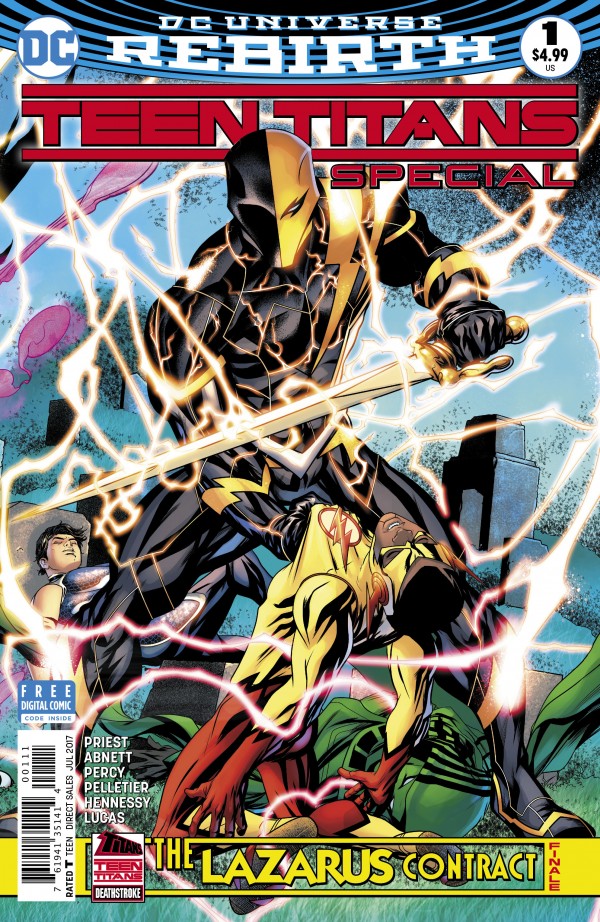 You know, this was an admirable attempt to bring the lustre of a yesteryear epic storyline like the “Lazarus Contract” back into the days of modern times. I was really appreciative of the way that Ravager’s origin was retconned into a new way of seeing university students subsidized by H.I.V.E. and seducing poor Grant Wilson into volunteering for experimentation by said criminal organization. That was definitely very clever.

But …by the end of the story, I hated Damian Wayne even more and despised the way he approached the entire scenario. I wanted Dick Grayson – even as Nightwing – to take command and pound that little tinpot dictator back into kindergarten.

Again – I miss the eighties. 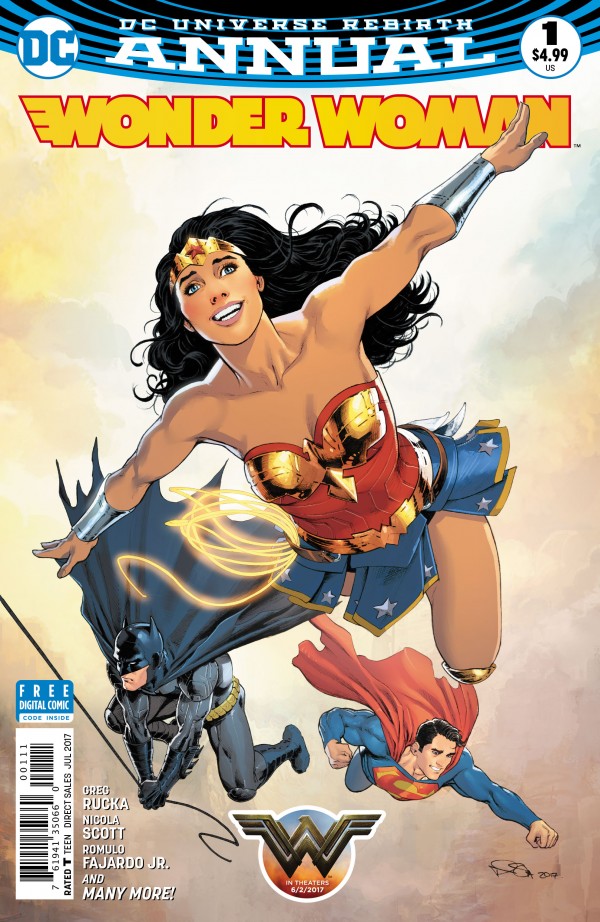 The compassion demonstrated by the various incarnations of this iconic and legendary character is exactly what I needed to restore my faith in the power of sequential art to tell a story but also soothes my soul.

Yeah, but as we progress through times, we need to have solid anchors – characters that are unchanging and remind us of values that are eternal, though stories are not. While there were a number of great short stories in this annual that fully and accurately portrayed Diana as the Wonder Woman we love, it was Greg Rucka and Nicola Scott who gave us the Wonder Woman we need.

In their contribution to this issue, we see confidence epitomized. Scott and Rucka have a developed and demonstrated synergy that speaks volumes of the attentive care they have given to this iconic character. Which is, of course, an analogy to the way that we need to see people in this modern day and age. People should be judged on the quality of their works and this is where Wonder Woman shines. Her ability to treat with both Batman and Superman in a first meeting scenario; to approach them with the confidence she displays is no mere bravado. She makes the reader admire her inner strength and to see the reactions from Batman and Superman is simply perfect.

Unlike the typical first contact situations where superheroes usually fight, Wonder Woman challenges them on a peer basis rather than antagonistic one. It’s refreshing and sums up what we want to believe in Wonder Woman, and is a joy to see it so properly represented.

Moderating and listening to Greg Rucka’s comments on storytelling at MegaCon this past weekend allowed me to learn just how much dedication Rucka puts into his storytelling. No detail is too small to be missed and every part of the story relates to a greater central concept with an intricacy the envy of a Swiss watchmaker. I’ve seen it in his world-building in other comics and his work is more than just a joy, it’s an education.

Of course, that’s the Pick of the Week. That’s the value of storytelling that I want to see and while more sales means that the good work from these talented creators can continue, it stands on its own as a testament to the work that will endure, despite declining readership.

I think Chris Claremont would like reading Greg Rucka.