There are terrible things that happen in the world but there are also terrible people who make these things happen.

It’s the terrible people we should concern ourselves more. When events occur by themselves, there is no-one to blame. But people who set these events in motion need to concern us more. After all, sometimes even bad events have a reason. Not all the time, but bad people always have a reason for why they do things, and that’s never a good thing and it’s hard for us to make sense out of them.

Well, let’s try and make some sense of the world with the list of comics for this week.

This is an epic-scale work that takes into account a sub-stratum of DC Heroes who are fun, but the exact compilation of their mix is extremely fun. I mean, Lois Lane, Batman, the Question and Green Arrow are all thrown together in a grouping of Detectives who are keenly aware of the present danger to the established governments of the world.

Alex Maleev and Brian Michael Bendis are the creators on this work. The scope is definitely intimidating when you consider the ramifications of this story. However, the episodic nature of comics prevents the full effect of the influence of the story from fully coming to bear on the reader. It’s the nature of comics and that’s just something part of the current state of the medium. However, it’s still an intriguing story that demands an audience’s attention.

I confess that I am definitely intrigued. Despite the fact that there are shadowy doings in the inner workings of the world, and even heroes don’t seem to trust each other in this story, I think that’s what makes it intriguing to me. I love the fact that Lois Lane, a non-powered yet highly capable woman is recognized as part of this distinguished community. For that fact alone, I love this book, and I think that’s a hallmark of Bendis’s writing, is to take a seemingly mundane factor and make it a necessary part of the story. I think it merits checking out. 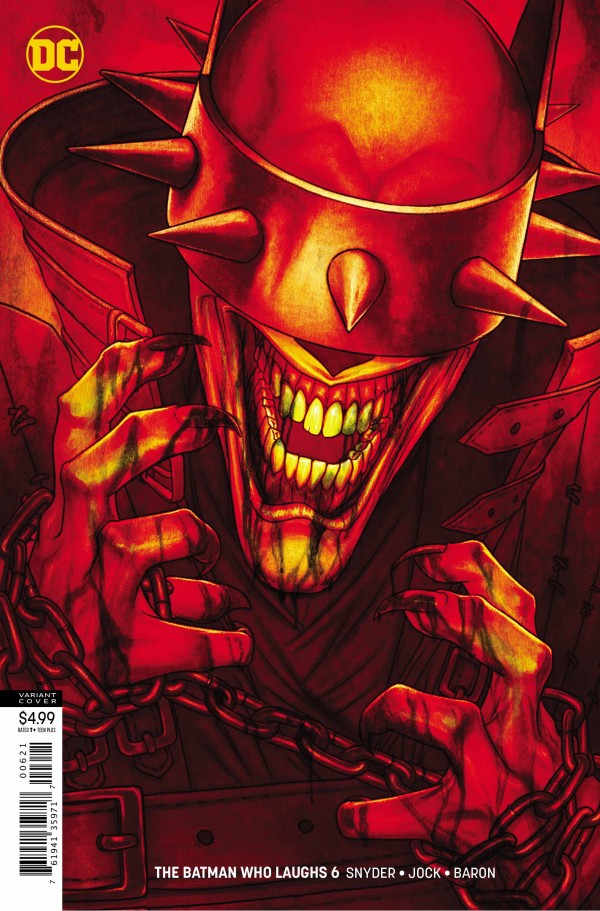 I don’t think I’ve ever been creeped out by a book as much as this issue.

In Issue #6, Snyder manages to really convey the full extent of Batman’s sacrifice by completely allowing himself to become his enemy in order to see what he truly sees, and gain insight in how to defeat him.

Of course, when Bruce Wayne allows the full transformation that he began in the previous issue, then that adds an extra layer of trepidation to the story.

Snyder looks like he is prepared to fully send the Batman over into one of the evil incarnations of his self that exists in the multiverse. The Batman Who Laughs is very similar to the arch-nemesis of Judge Dredd – Judge Death. As a loyal Judge Dredd fan, I can’t help but notice this similarity. I mean, the fact that TBWL is gawky, has a fixed, rigour-mortis smile and wears armour that looks very sado-masochistic is kind of hard to ignore. Yet, it’s a powerful trope to invoke. After all, I can’t think of an image that managed to incite more fear than Judge Death. So, Snyder has managed to cultivate that trope to sacring the crap out of present-day Batman readers. Kudos to him for finding a concept that works. Of course, credit goes to Jock for exactly presenting the ideal image as well. 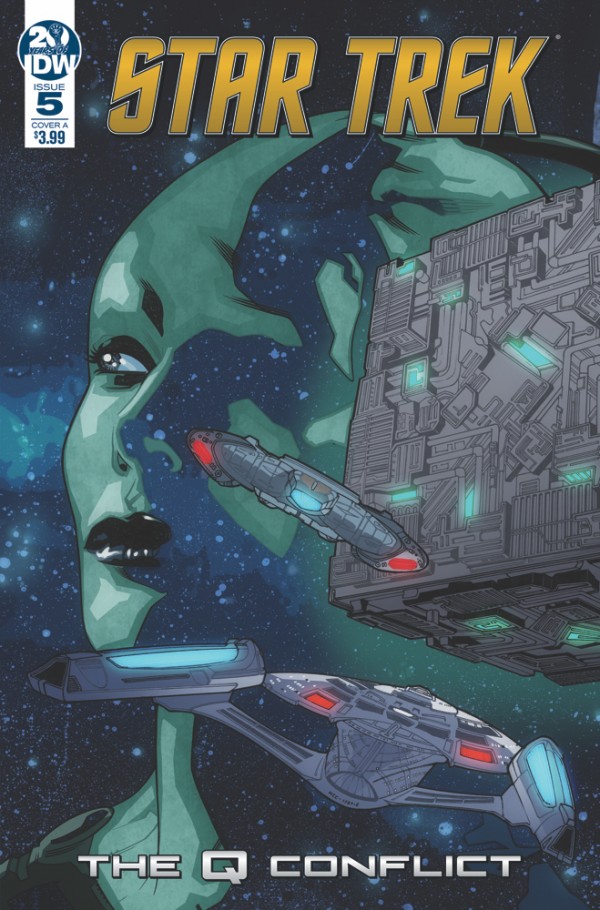 To me, Q represents ultimate futility. He can’t be stopped or thwarted – he’s an omnipotent being. However, he’s not omniscient, as his proclivity for meddling in the affairs of Humanity demonstrates. However, there are things that happen in life that we can’t prevent or predict – they just happen as well. The randomness of life can be so harsh, and so can Q.

Scott and David Tipton team up with David Messina once more to bring us the fifth installment in this story. The captains and crews of the most memorable series of this franchise are brought together to help decide the matter concerning the Q-Continuum and the rest of the other omnipotent beings in the galaxy.

In this issue, Q has finally pushed another species too far. Last issue the Bajoran Prophets decided to extinguish the reality that Q has forced upon them, requiring him and other members of the Continuum to repair the damage. Clearly, this was meant to teach Q a lesson.

He failed to learn it.

This is the issue where other members of the Continuum, the Metron, Trelane and the Organians see his hold on this conflict loosening. This is the signal for the Starfleet Crews to make their move.

It’s a real treat to read this story. The Tiptons know Star Trek and their extrapolation of the characters and how they would work together is a fan’s delight. 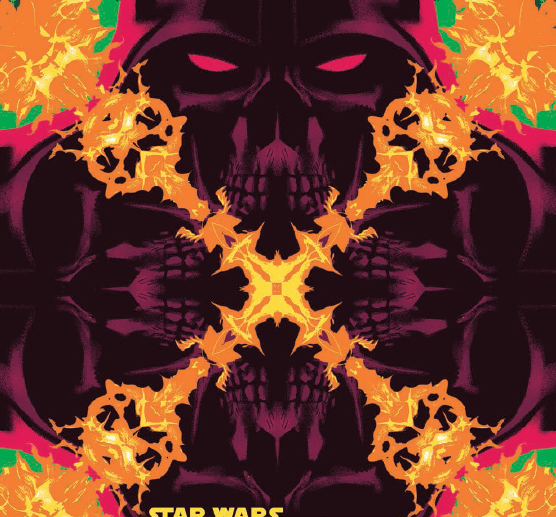 I don’t know why I have such a compulsion for this master of villainy. Despite the fact that he is probably the greatest representation of evil personified in a villain in 20th and 21st literature, he is still one of my top five favourite characters.

I’m sorry to see this series end. Dennis “Hopeless” Hallum and Geraldo Borges have given us a good issue for it to finish on though. In this story, we see Vader exerting the fullest of his power, ignoring societal rules and relentlessly chasing down his prey.

However, there are moments when he hesitates.

I think there are two things that I like about this character and Hallum manages to present these features very effectively. First, he is conflicted. He still senses the good in things and though he is clearly in the service of the Dark Side of the Force, he can’t ignore the good that is still in him.

The other thing is his power. It’s indisputable and teaches us the lesson about absolute power corrupting absolutely. Vader has been not just an extraordinary villain but he also serves as an example of this idea. If we succumb to the idea of chasing power for its own ends, it eventually consumes us.

These are the people we need to watch out for and hope that eventually they find redemption soon.

Here’s your classic anti-hero doing all the wrong things for what he sees is the right reasons.

I have to doff my hat to cover artist, Greg Smallwood, who gives us a perfect Dolph Lundgren version of Frank Castle on this book!

The first part of this arc is titled “War in the Streets”, and I like how Matthew Rosenberg is setting us up for clearly an explosive conflict to come as the Punisher is getting closer to his nemesis and quarry, Baron Zemo.

There’s a quality to Szymon Kudranski’s art that fits the Punisher. Beaten, scarred and completely fragged up after his many conflicts, Kudranski’s style shows us a Punisher in this condition that I can completely accept and appreciate. War is hell, and that’s what this artist gives us.

The Punisher is one of those villains that you can never fully acclaim because you secretly want to be him. Fuelled by determination and a fiery rage that can never be fully extinguished, Frank Castle is a force of relentless vengeance and in this day and age of rampant injustice, vengeance for all the wrong things feels very satisfying.

I think that’s the pleasure in reading this book. Matthew Rosenberg must be channelling some of this spirit. Justice is such a deep-rooted conviction in all people, even those who are content to forego their involvement in the workings of the world. When someone takes it upon themselves to seek vengeance and to punish wrongdoers who seem to get away with, well, in Zemo’s case, murder; there is a great sense of enjoyment in reading a story like this.

A good question for Rosenberg is how does he manage to exact that spirit? How does someone cultivate and sustain that mood when writing a story like this? I wonder about the motivations of writers and this is a book that requires a bit of that rage to stay inside Frank Castle’s head.

Punisher #12 is the pick of the week. Because, this week of all weeks? I want the Punisher to punish. I don’t want any more bad things to happen in this world and I want the wrongdoers to suffer in the same way they’ve made others to suffer.

We need more good people to ensure that there is more good in the world, but until more of those people step up, I’ll settle for the bad ones doing the wrong thing for the right reason.

Pick of the Week: Punisher #12