Adaptability is the theme for this week’s run. Let’s be proud of ourselves for making it to this point. It hasn’t been easy and even if it doesn’t seem like we have come very far, but we have. Things are slowly starting to open up but we still haven’t got a vaccine in place and the fear of COVID-19 is still hanging over our heads. We are reminded of that every time someone gets too close to us, when we put on a mask to go shopping or when we see the daily infection rates on the news.

We soldier on because that’s what we are supposed to do. We improvise, we adapt and we overcome, right?

For example, take my friend, Anthony Marques. A great artist in his own right, I met Anthony when he was working with the Kuberts (Joe, Adam and Andy) when they were all together here in Toronto as con guests. Anthony recently became the President of the Joe Kubert School of Cartoon and Comic Art (www.kubertschool.edu) and also is the owner of Dewey’s Comic City.

Recently, Dewey’s changed location to house itself out of the school. What a great idea and it’s an example of adapting to times and circumstances in order to overcome the obstacles life throws our way. It’s also a great business fit, when you consider that the students at this well-reputed institution represent the of the next generation of comic talent, I have to give Marques a lot of credit for his innovation and perseverance. This is the type of adaptability we need in these trying times.

Oh, incidentally, Marques will be drawing The Green Hornet for Dynamite Comics next month. So, we’ll be sure to keep an eye out for that.

Comic artistry, teaching and retail … all in one. That’s adaptability to be celebrated and what I’m looking for in this week’s comic run, so, let’s get to the list. 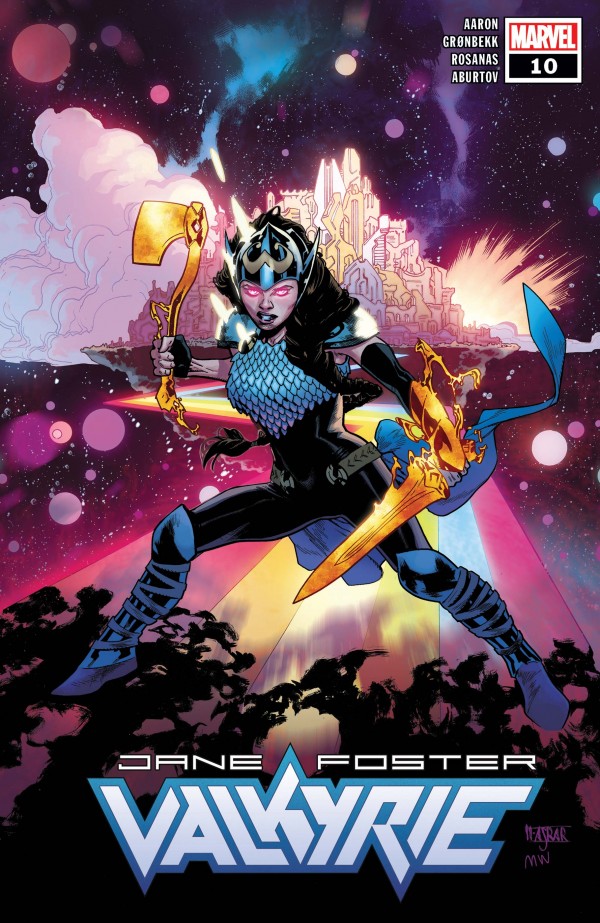 Jane Foster has gone through a huge range of situations: nurse, doctor, cancer patient, Thunder god and then the aspect of the Valkyrie, the Norse gatherer of souls from the battlefields; the usher of worthy warriors to Valhalla. Let’s face it: she’s the ultimate survivor.

Jason Aaron has definitely delved deeply into the realm of Norse Mythology to bring this character to life. Part Three of “The End of All Things”, Jason Aaron and Torunn Groenbekk (Sorry – can’t reproduce the slashed “O”) have presented a story with a detailed Norse tapestry, rich in lore, family history yet all within the Marvel Universe. Drawn by Ramon Rosanos and coloured by Jesus Aburtov, it’s incredibly detailed and definitely NOT the environment that Jane Foster is used to.

So, how does she overcome an ensorcelled Thor, the return of a prodigal elder God who lays claim to the throne of Asgard and that she has lost the Undrjarn – the All-Weapon that was entrusted to her, the last of the Valkyries?

That’s the thing about learning to overcome. Sometimes you don’t have a plan, you just have faith. Faith in your ability to keep yourself and those around you safe, but a faith that is rooted in common sense and good judgement. You know you can’t fight overwhelming odds, even if everything in your heart says to, but what if you are the last defender?

You depend on yourself, but you also have faith in the character of the people you have chosen to be with. The respect you give is the respect you gain in return, and that sense of solidarity is the strength that we all draw upon in order to make our communities stronger. Jason Aaron just said this in a recent tweet:

“We’re not just the stewards of Batman & Spider-Man, but of an industry, of a creative & professional working environment, one we need to leave better off than we found it. How we treat each other & wield our influence will always be more important than any comic we ever create.”

Self-worth isn’t just measured by the people we are around, but our sense of consideration for those around us does. Compassion and thoughtfulness for those who we are with makes us better people. The more we strive to think about this concept makes us better equipped to deal with adversity.

That’s Jane Foster. She has faced those odds before, and knows the scent of battle, even a lost cause. I have a kid who not only fought cancer but even petitioned the Norse Comic All-Father himself for a drawing to celebrate her battle – if there was ever a character who best represented my daughter, it would be Jason Aaron’s Jane Foster.

This one really spoke to me.

The Question: The Deaths of Vic Sage #3 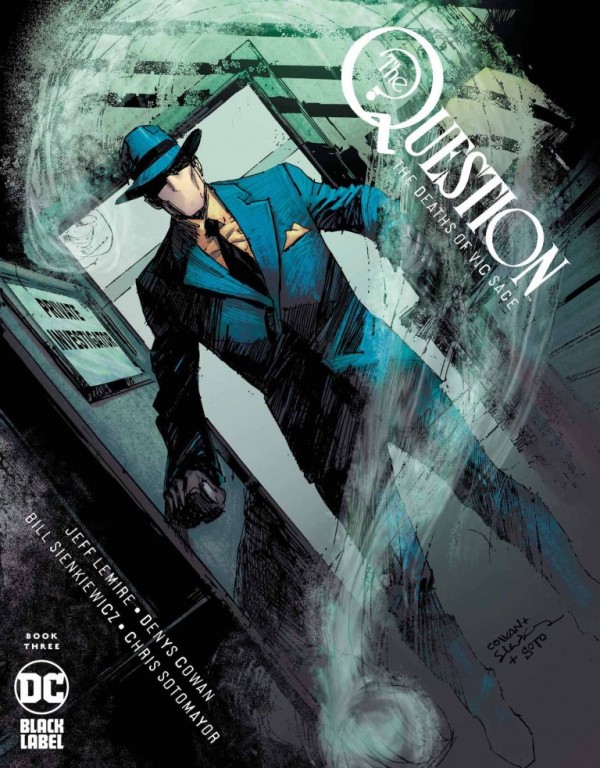 I was never one for the crime noir genre of story-telling, but that doesn’t mean I can’t respect it. Jeff Lemire really surprised me with this story though; not his usual style but I have to say, I really enjoyed it.

Vic Sage is a typical underrated character. A leftover from the Charlton Comics days, the Question was just a detective with a blank face. A good left hook, to be sure, but the way that this character always managed to adapt to his opposition was to simply look for the connections. Once he figured out where the threads were, all he had to do was pull at them until the whole mystery was revealed.

Lemire has always had a gritty style of storytelling for me. Novel, unique and organic, it’s a reductionist type of writing in which he writes simply what the character needs to say with very little exposition. Sweet Tooth, Trillium ­are two of his original works that highlight this for me.

However, there’s a lot of exposition in this, as one would expect to be in a detective story. Internal monologuing galore, it’s a very complicated look into the mind of Vic Sage as he unravels the mystery of the man with a thousand faces and the unknown redheaded woman who plagues his dreams.

The pencilling of Denys Cowan and the inks of Bill Sienkiewicz make for dynamic combination, reinforcing the comic’s crime noir aspect with shadows and vague scenery. The 1930’s setting is like a playground to these artists who were clearly in their elements.

Sage is a character who has to be innovative to survive. He’s either outnumbered, one step behind his quarry or just out of his depth. But, Lemire is investigating an aspect of this character that really hasn’t been explored. As Sage believes that everything is somehow holistically connected, this gives him a perception that taps into his creative ability to overcome any opposition, which, if you

I was stunned by how much of Sage’s sleuthing process resembles the way a lot of people commonly try to deal with adversity. We talk to ourselves, reason things out and when there are very few people around, we even talk out loud. There was a great deal of character exploration in this story and I really sunk my teeth into it. 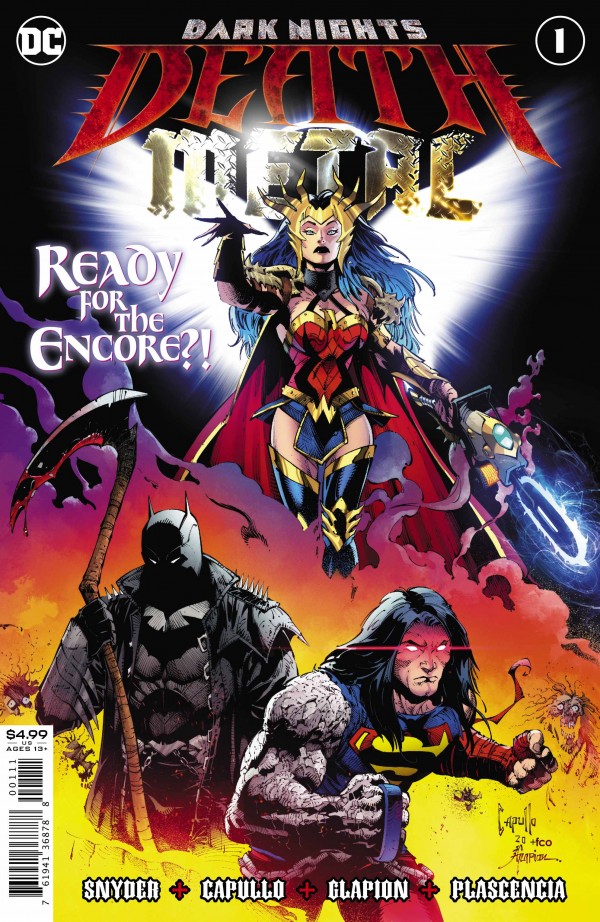 DC enters the ring with full fists flying with this title from the Brothers from Different Mothers, Scott Snyder and Greg Capullo. Inks by Jonathan Glapion, colours from FCO Plascencia, and letters by Tom Napolitano.

Following up on the events of Metal, the heroes have lost. The Batman Who Laughs has won. The Worlds that used to number 52 have now dwindled to eight. The heroes are scattered, dominated or now merely shades of themselves.

The DCU is not the place you remember it to be in this series.

Wonder Woman is the guardian of Hell. Batman is MIA and who even knows what has become of Superman? Seriously … with the Swamp Thing a mere shadow of his former self, there’s definitely a grim outlook for this book.

The question is: how do they win?

Despite the situation, the measure of a hero is to simply keep fighting – a hero has to just go on. That’s a super power that any of us can aspire to – to have the resilience and the capacity to maintain the fight and continue on, regardless of the urge to stay down. Whatever one can do to just stay on his or her feet, to ignore the pain and to hold on to the stubborn reserve to stay standing. Sometimes, the trick is to pay attention a new landscape, like the one that Capullo and Snyder have built for us read. In order to keep going, our heroes need to improvise new tactics in this environment.

That’s actually the highpoint of the story for me in this issue. Readers know that the situation is hopeless, and the typical way that the heroes combat their adversaries isn’t going to cut it in this book. They need to be different. Snyder and Capullo give us some pretty imaginative ways that our heroes adapt and face down The Batman Who Laughs. I’d describe them, but that would take the fun out of reading, right? I hate spoilers.

Snyder and Capullo have created a monster out of this book. Double-page spreads, totally metalled-up versions of the heroes we know, and an apocalyptic wasteland for them to all rage against the dark machine that is the Batman Who Laughs. It’s a visual extravaganza – I think that’s the only way to properly describe it. But, of course, that’s what we’ve come to expect from Capullo’s artwork. It never disappoints.

Getting back to that who idea of how to overcome? You just do … or the alternative is too hard to think about, especially if you have people who think about you, people who love you or, even people who depend on you. Everybody has a place in this world, and everybody matters in some way. Like Vic Sage’s perspective, we are all connected.

I come back to one of the loving memories of my daughter’s five-year battle with leukemia: her relationship with an orderly at Sick Kids Hospital here in Toronto. Whenever she would go in for her many spinal taps, Leonard the orderly was always there, in the hallway, to wish her well. As much as this guy wasn’t a trained healthcare professional, his smile made a huge amount of difference to my daughter, my wife and me for just making us feel normal.

We take what we can get in this world, we hold onto it and we make it work for us to bring a semblance of order, normalcy and even a slight amount of comfort. That’s how we get by; we take the cards we are dealt and we somehow make it work.

That’s Dark Nights: Death Metal #1 folks, and it’s the pick of the week.

Go out and overcome, improvise and adapt … until next week.