I may be naïve, but I think the most poignant stories are the ones about the righteous person trying to do the right thing in the face of overwhelming adversity. Why? Because I think those are the ones the most believable ones.

I’ve been wrestling with this notion for the last little while. It just seems that I’ve been possessed of this notion that if you always try to do good in the world, then the good comes back to you in some shape or form. Sadly, that doesn’t protect you from those people who seem to delight in doing the opposite in the world.

That’s the theme that has my attention for this week. Let’s get to the list of comics for this week that fit that theme. 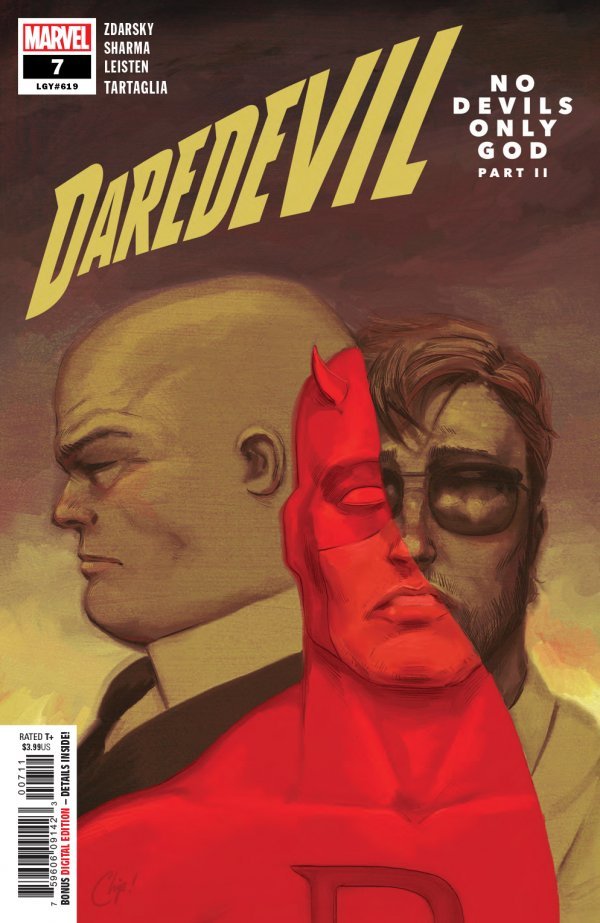 Chip Zdarsky and Lalit Karma Sharma bring us Part Two of this arc, titled “No Devils, Only God” and it’s not a title that I’m in the mood for, given that the world seems to be more populated by the former these days. It’s also a bit of a misnomer as Matt Murdoch has given up the Daredevil game and title and a good cop is best upon by all the worst examples of his profession.

Is there no justice in this world?

Of course, what I got that Zdarsky was asking in this book was: is there redemption for the wicked?

Redemption is a gift that should only be offered to the ones who truly repent of their crimes. In this world – in this week – I can’t say I’ve seen anyone deserving of that redemption. Mistakes happen, but mistakes must be owned up to and until that happens, I see no right for the wicked to gain redemption.

But Matt Murdoch isn’t wicked; he’s just tired. He’s tired of the injustice continuously knocking him down but his self-perceived inadequacies clearly equate to his lack of worthiness. In his mind, unworthiness is wickedness, in a religious sense, and as we all know, Murdoch subscribes to a religious perspective in his pursuit for justice.

God has punished him. But I wonder: do all good people feel like this when they are prevented from doing the right thing or are targeted? There’s a strong sense of perspective in this book and that’s something we all need to make sense of stories, including the ones in our lives.

Still, I want the wrongdoers to suffer and so must Matt Murdoch. I wonder when Zdarsky will have him put on the cowl again? 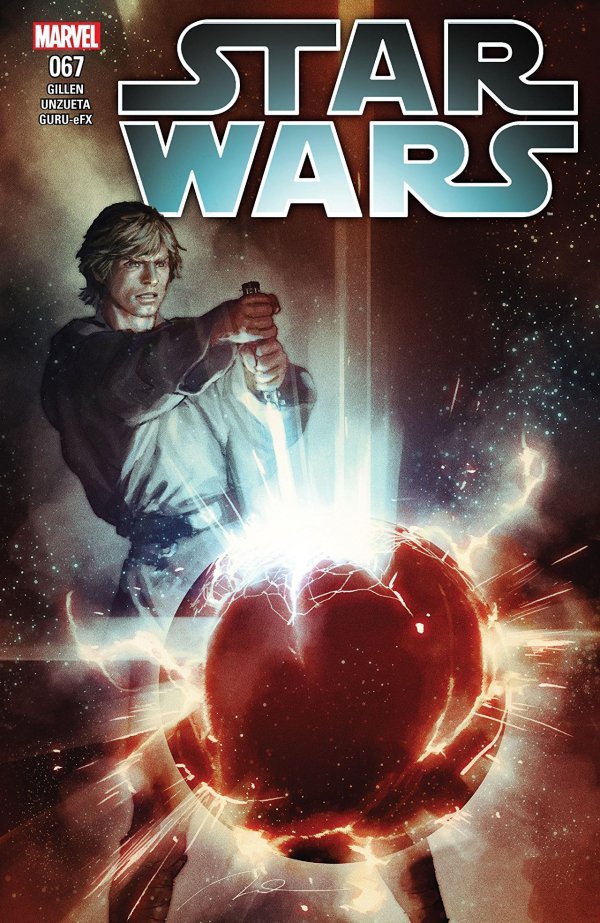 The revenge story I am in the mood for. Part VI of “The Scourging of Shu-Torun” from Kieron Gillen and Angel Unzueta is a story where we see this revenge realized.

You know what a scourge is? It’s a barbed whip. It not only leaves a welt upon the skin, but it actually tears the skin off a person’s back. It was a punishment that was reserved for the most cowardly and despicable of crimes. I have a need to deliver a scourging this week and I’m glad Gillen and Unzueta are doing it for me as they deftly present this story of Princess Leia’s revenge on the traitorous Queen Trios.

It’s also the last issue for Gillen and his work on this story has been nothing short of phenomenal. Of course, while the story wrapped up, I couldn’t help but think that a scourging was too good for Trios and that the revenge didn’t bite deeply enough.

Of course, I may just be projecting … 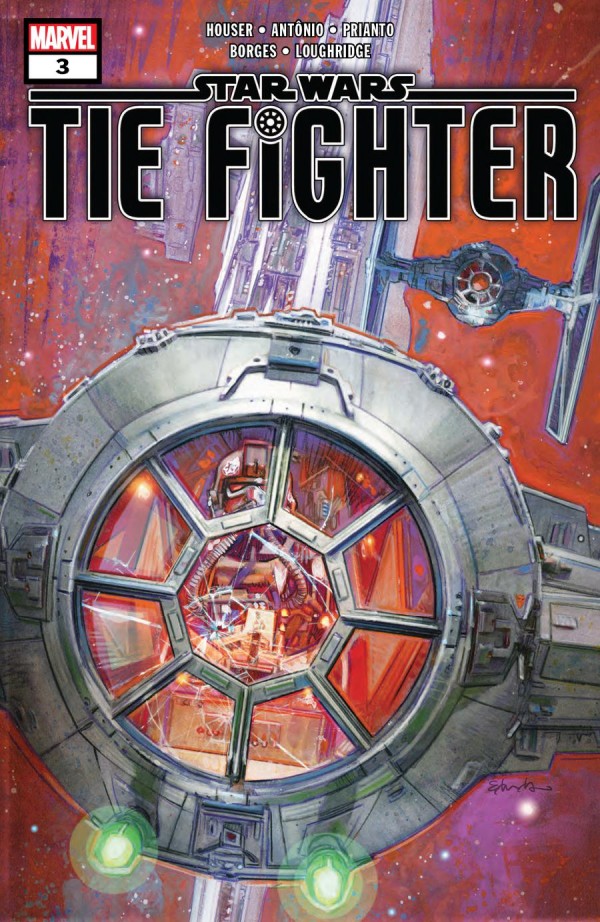 I’ve talked about good people suffering at the hands of bad people, but what about when bad people try to do the right thing? That’s kind of the draw for this comic from Jody Houser, Roge Antonio and Geraldo Borges.

Well, perhaps “right” isn’t the correct word. After all, perspective is an element that needs to be applied before we start making judgements and let’s not forget we are talking about soldiers who fight for a totalitarian regime intent on overpowering the rights and freedoms of an entire galactic population!

Yeah, these people need to suffer as much as any wrongdoer, but in this case they’re the underdogs and there’s a natural proclivity to support the underdog, regardless of what colour their flag is. However, it always seems to me that even if the wrongdoers are trying to do some good, they suffer the worse for it. Doing good is its own punishment, I suppose.

Still, the anti-hero motif is well-employed in this book. Imperial TIEfighter pilots have to be exceptional as well as exceptionally well-trained, as every good Star Wars fan knows. They’re a different breed from regular Imperial troops and Houser does an excellent job in telling their stories.

The Savage Sword of Conan #6 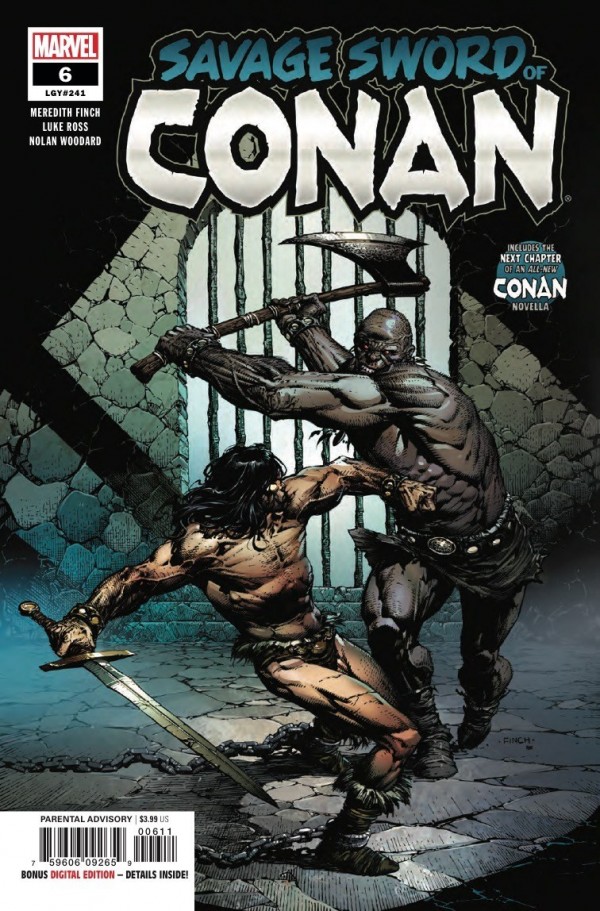 Meredith Finch takes her stab at Conan in this glorious issue, titled “The Suitor’s Revenge”. Revenge on the wicked is a big theme for me this week, as you’ve clearly gathered by now, so I couldn’t resist both the bad pun or reading this one.

Conan may be self-serving and he’s the type of hero you least expect, but you are damned glad that he showed up. Always one of my favourite characters, I’m sure that Meredith, a lover of fine heroic fantasy fiction, is excited to write one of Conan’s stories. She has a great partner in Luke Ross, whose style reminds me of a combination of Sal Buscema and John Romita, Jr. With a cover from David Finch, this is a book that should see some sales success, I’d imagine.

It’s a solid story set-up – an easy meeting between a stranger bent on revenge and Conan, and could be an appetizing staple from Howard’s own pages. But, as we progress, we get a story even more delicious than the set-up promised, as Conan’s sword continues to carve out his won destiny.

It’s a quick story, but very satisfying. More than anything, we want Conan to fight and find his own revenge. It’s a vicarious thrill to see the Cimmerian hack and slash his way to getting his own justice. It’s why I love him, and yeah, I wish it were all that simple in real life. 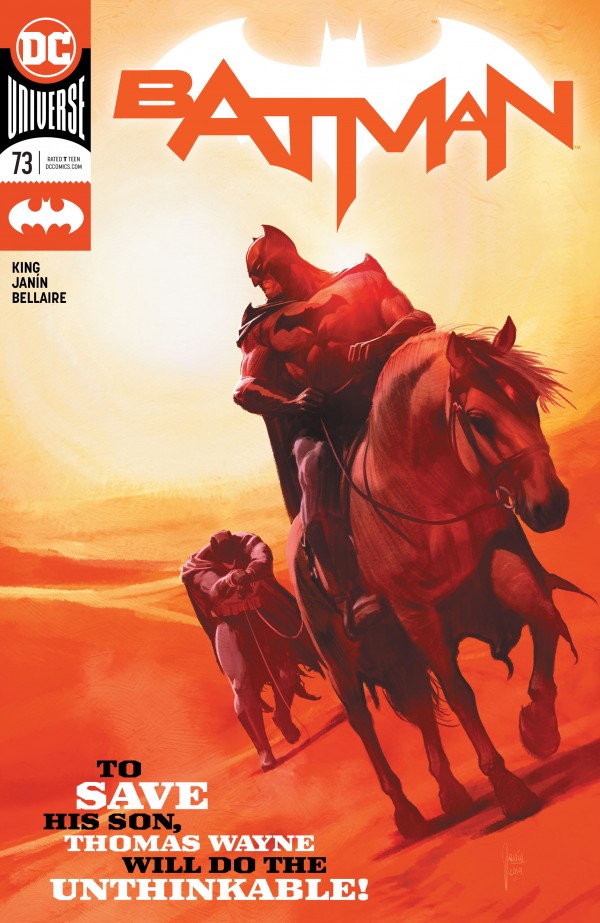 I want justice. I want revenge. Right now, this is the mood I’m in and this is the issue in this arc that’s hitting the right emotional notes with me.

Why do bad things happen to good people?

Bruce Wayne has suffered; he has given up his life in service of his city, in a bid to support his vow to his parents and what is his reward? Orphaned, defeated by his enemies and it takes a man who is his father in an alternate dimension who understands that it is better to be happy than right to pierce that dimensional boundary and try to restore what has been taken from his family.

The impossibility of the premise sets this right in the ultimate extreme of fantasy wish-fulfilment for me – and it works. With Mikel Janin’s wonderful pencilling, it can’t go wrong.

To be honest, I’ve been puzzled by Thomas Wayne’s endgame in this arc so far. This was one though, that made a lot more sense and revealed a bit more of Thomas Wayne’s overall plan. Tom King is promising an epic conclusion for Batman #75 and I think we are finally starting to see its resolution with this issue. To be frank, it’s a been a bit of a convoluted story. However, it’s King’s ride and he’s the driver. I have gotten used to his brand of storytelling and I think it’s too early for him to be pulled off the title. I appreciate King’s focus on family and relationships in his interpretation of the Dark Knight. It’s an angle that I can certainly relate to, particularly with the theme I’m looking at this week.

This issue was definitely a change of direction for the arc and I have to say I thoroughly enjoyed it more. 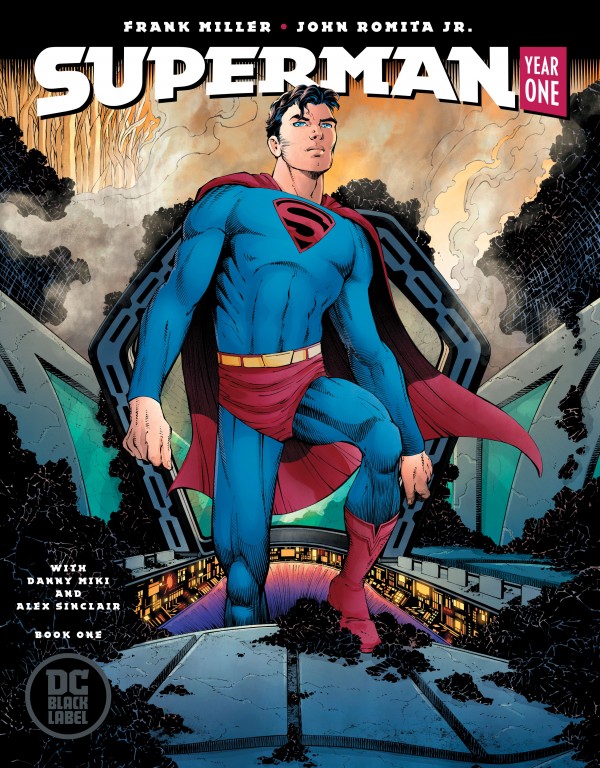 I was never really a Superman fan. I mean, I think when I was ten, I used to collect the title for about a year, but it just got too stale. Back then, I got it into my head that Superman is too much of an ideal hero, even for comics. Sadly, I never got out of that thinking – until John Byrne made it more attainable for me.

But John Romita, Jr. and Frank Miller have given me a 64-page story in which I can buy again. It’s a re-telling of the story we know all-too-well; a rebirth of a rebirth of a rebirth. But I haven’t been this excited about a story since John Byrne’s title. In my mind, I see a connection between the two works and that’s a wonderful blend of nostalgia and reminder about exactly what it is we need to admire about Superman.

I find it interesting however, that other than a few minor details, Romita and Miller pretty much draw heavily upon Byrne’s re-telling. Yet, it’s the focus on what seems minor but is the essential ideal behind Superman: how to use power responsibly and effectively.

People are cruel. In this re-telling, there’s a heavy emphasis on small-minded, small-town bullies and Clark Kent’s introduction to how to deal with a systemic problem rather than its symptoms. In this case, it’s bullying. The simple solution is to treat violence with violence, but the inherent challenge for Clark Kent, fledgling hero, is not to simply hurt them – that would be too easy. But how does he deal with the cruelty? Swiftly, with measure and with compassion.

There really isn’t a lot of compassion in the world today. For example, this week, I’ve seen an elementary school principal crush an eight-year old child’s entire social network, deprive her of her friends and inspire fear in other families simply because of a decision that these people are out of the school’s catchment zone. I’ve seen teen-agers swarm another child and assault him because they can. In a few short days I have personally witnessed behaviour that defies the concept that humanity is inherently “good”.

As I teach on a daily basis, I am now learning the idea that it is better to be happy than it is to be right.

Superman is both right and happy. But it is only a heroic ideal that can’t exist in the real world. When Clark Kent protects his friends from the local bullies, it is because he has the power to do so. He is happy in his ability to right wrongs, but I, as a teacher, can only dream of that.

While I am saddened by this, I read this story with a hope that one day, someone will be able to do what Superman does. Until then, I can only read and dream.

But that is the power of comics. They allow us to read and dream.

Even though real life is becoming more and more cynical in its outlook and ideals can only be achieved in fiction, at least I have that. Superman: Year One #1 is the pick of the week because even it can’t be achieved in real life, then at least there is a vision of what can be dreamed.

Yes, even if it can’t be achieved.

…Sorry I didn’t finish with a happy ending.

Pick of the Week – Superman: Year One #1