Slight list this week. Quality over quantity, right? Still, this slight list marks my contribution to the fandom of comics. I like to think of myself as restrained and politely critical but there are certain comics that I identify with on a personal level but that I also admire from an artistic perspective.

You know that article that’s been recently tearing up the internet these days – Devin Faraci’s piece on the modern state of fandom? If you haven’t seen it, it’s called “Fandom is Broken” and it’s on birthmoviesdeath.com and it’s a pretty damning one in painting a broad picture of the sense of ownership fans have over their favourite franchises.

His argument depends on the perception of the Internet as an anonymous forum for espousing senseless devotion and thoughtless entitlement. Basically, people feel safe in issuing death threats or poorly written ultimatums over the Internet because they see it as a shadowy place from which to hurl criticisms or reactionary responses to the sanctity of their individual fandoms. These are things they love, yet these lurking masses strike hurtful blows from the shadows in their defense without any accountability for their words. This is not the same as standing up for your beliefs and it is a phenomenon that didn’t exist pre-internet.

Well, I agree with the article somewhat but I also don’t think that the nature of broken fandom is a new concept. It has always existed but the Internet only seeks to make sentiments like these more obvious rather than being responsible for its creation. As any soccer hooligan can demonstrate, they are willing to bleed for their beloved clubs and riots all over Europe in the last forty years can attest to that sense of fandom.

It’s a form of unfettered extremism that, while it is not a physically damaging as soccer brawls or other sporting event street riots, still isn’t right. This is what prompts Faraci to declare that fandom is broken. I don’t think it is. Rather I think Faraci has simply overturned a stone that reveals a darker, unhealthier side of fandom.

Anyway, these are just thoughts and ones that I hope will serve to me as a stark reminder that even though I have a deep-seated love for comics and the work of their creators, I just comment on them. They are not mine nor do I have any sense of ownership over them save for what the limits of my admiration can allow. 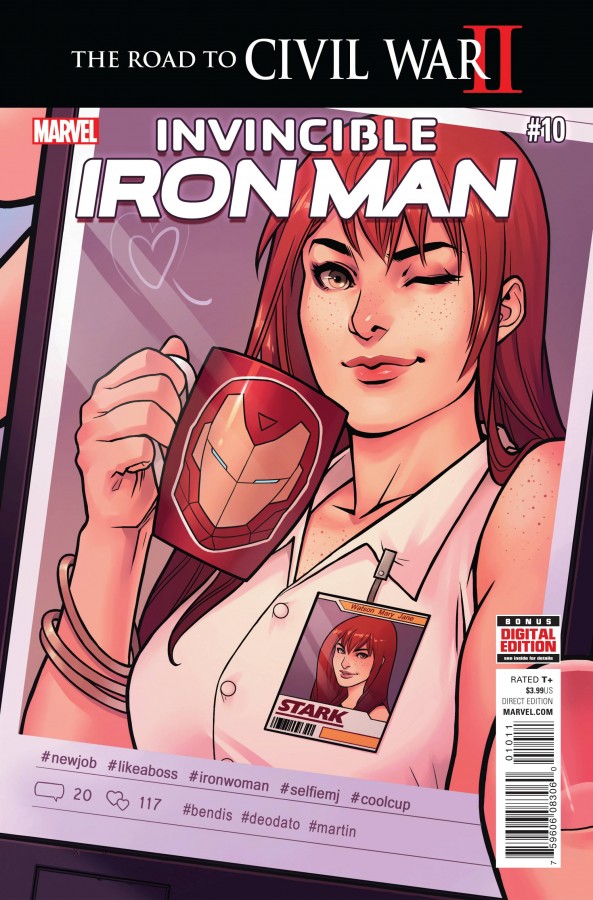 Another Mary Jane cover. This over-use of who was originally a minor supporting character when she was first created is a little cheap. However, as a comic fan who absolutely adored Mary Jane Watson (and still does), I can forgive it.

I’m sensing that this might be a way of bringing the family back together again, if you catch my drift? I mean, as we can see from the cover, at least she took the job.

I found this is the point where the storyline seems to slow down and get a little tedious. Tony’ company is under siege, Mary Jane to the rescue and somehow (which I somehow missed) both Stark and Rhodes managed to survive the Techno-Golem and go deep into hiding in Japan.

Oh – whatever happened to Spider-Man? Yeah, I think there’s something I must have missed that might have made this story a little less pedestrian. Even the last panel wasn’t enough to pique my interest level any more. 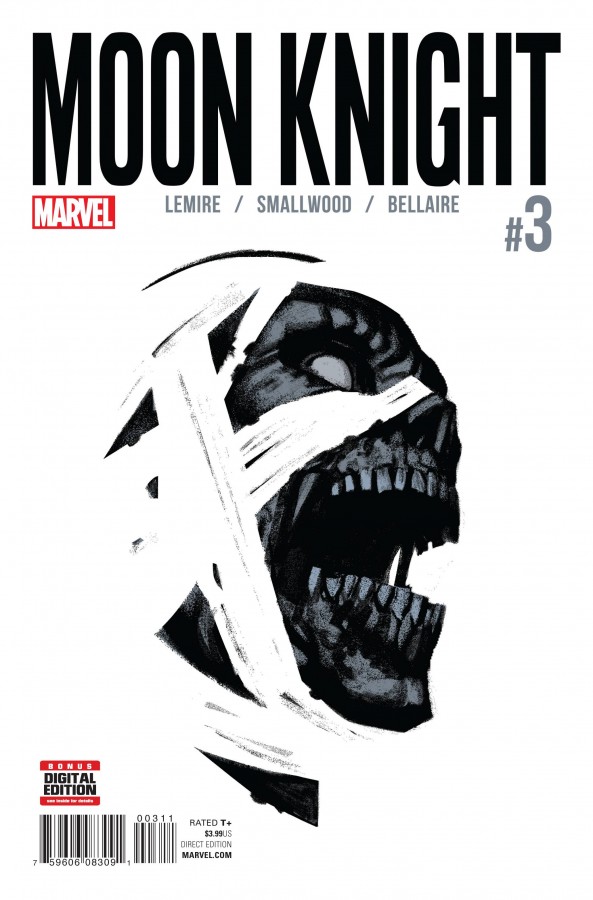 This is a surreal re-exploration of the Moon Knight saga as we begin to see Marc Spector’s character begin a new initial journey into being the Fist of Khonshu. Sure, it builds on the work that Warren Ellis et. al. showed us a couple of years back but that’s a great way to begin this character anew. Still, if there’s anything that Jeff Lemire does, it’s surreal.

I enjoy Greg Smallwood’s art. It’s straightforward and unpretentious. Good art illuminates the story – it shouldn’t confuse it and Smallwood’s visual storytelling is a perfect complement to Lemire’s writing. This is a good team and I’m eager to see more of their work. 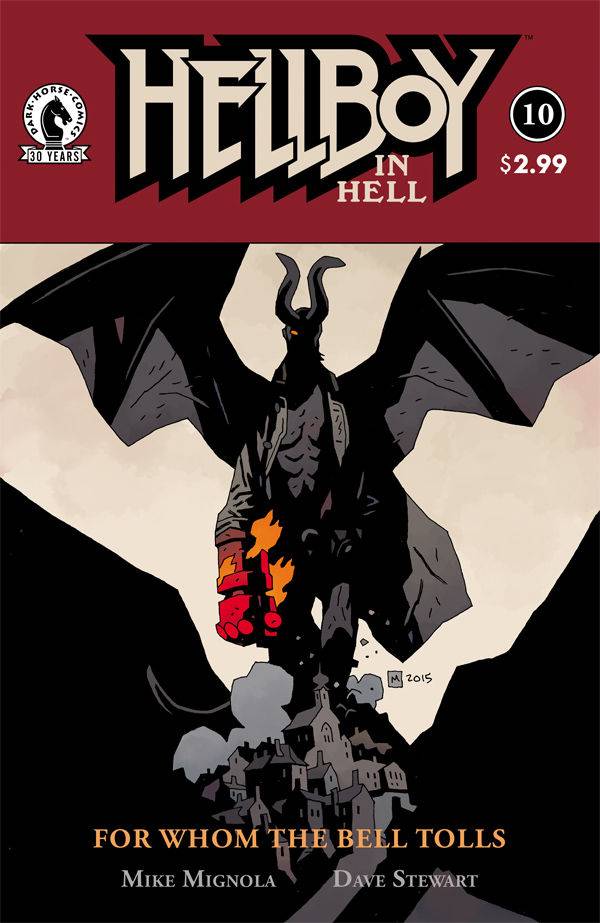 This is the last issue in which Hellboy finally becomes the form of the world’s destruction! Mignola at his best as Hellboy realizes his destiny and each step he takes causes the world to shudder. You know, Mignola is going to be taking a year off to explore other artforms. If you don’t have his treasury collections or the hardcover that this is bound to become, then you’re missing out. Pick this up.

Wow … subtle; very subtle. The message about Batman in this book is one that measures Batman’s conviction. The combination of Tom King and Scott Snyder’s writing collaboration is rich and emotional and more than adequately communicates the level of Batman’s commitment. There are some great Batman scenes in this but also some Bruce Wayne moments as well. Throw a few hints of some new developments to come in the future and you have a wonderful first issue that promises some awesome Batman to come. Mikel Janin pulls art duty on this book and is my first introduction to his work; good book to start in. 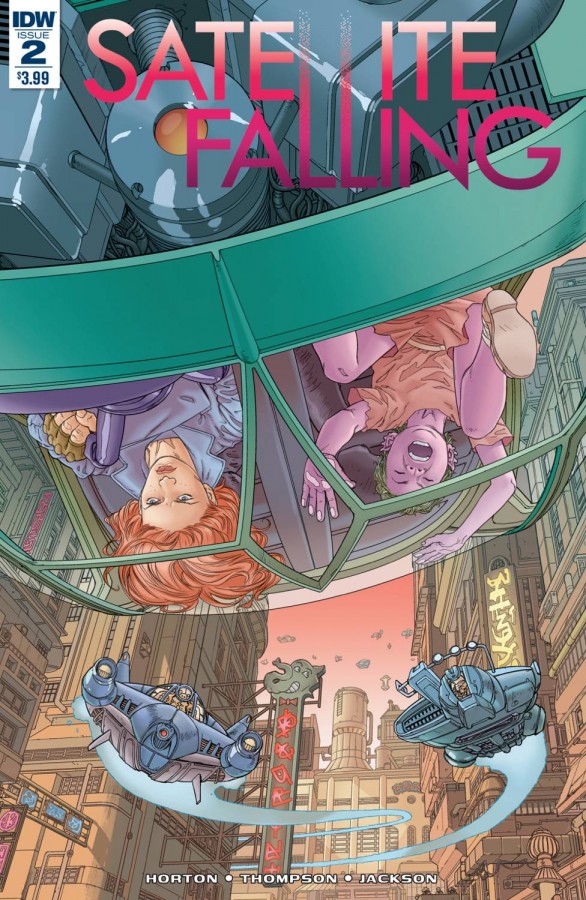 An amazingly gritty and dystopic view of humanity in space. It’s refreshing to see a sci-fi story where humanity doesn’t hold all or a significant chunk of influence in the galaxy. This is a dramatic and entertaining comic that has a sense of irony in that Satellite, an alien artificial colony that humanity avoids out of xenophobia and racism, is dependent on a human to save it. Lily, the heroine is one with a lot backstory and heart. I’d like to see more of this book.

You know, DC has needed a shot in the arm for a while and this just might be it. We looked at DC Universe Rebirth last week and found it to be thoroughly enjoyable. It’s good to see the same vein of storytelling present in this book. With the many references to Flash, Crisis, Infinite Crisis, there’s a return to the heady days of 1980’s classic story features. We see the same sort of Batman that we met in JLI, Batman & the Outsiders and others – and that was Batman that sold books.

Batman is a flagship character. The work of creators like Loeb or Snyder have gone far to bring him back to the forefront where a flagship character belongs. But Rebirth melds the values of the past with the work of those new modern creators thereby giving DC that much-needed shot in the arm I was referring to earlier. In short – it’s awesome and you should get a copy. In fact, from what I’ve heard, the other Rebirth titles are getting similar treatment. If so, then we are in for some amazing new developments.

Let’s just hope that the fans can handle the excitement.