It’s a pretty light list this week, which is somewhat anti-climactic as it’s also the end of the school year. I was sort of hoping that there would be this grandiose list to relaxingly read through, basking in the joy of an empty classroom as my graduates have moved on to the next stage of their educational careers. 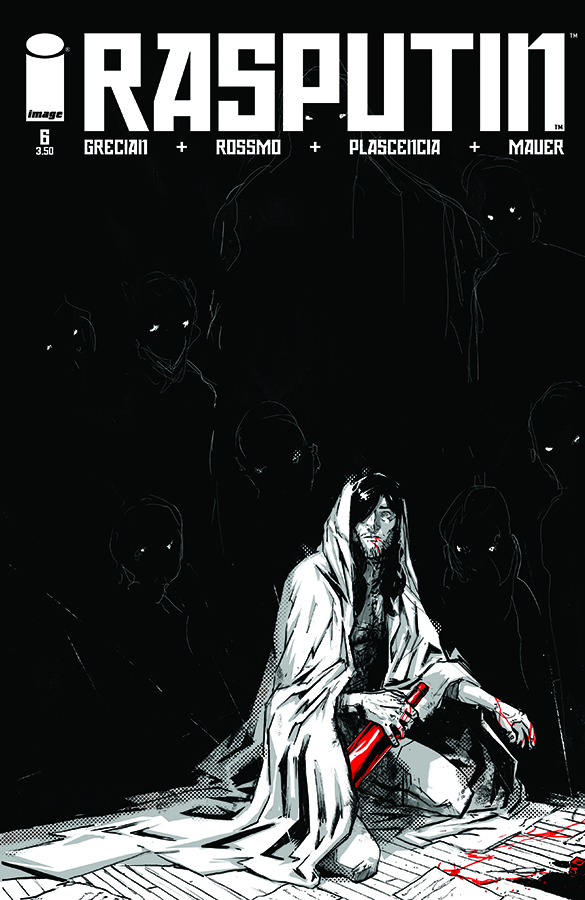 I remember that I had convinced myself to stop picking this comic up, but by some chance, a copy of it wound up in my selection list – as well, c’est la vie, oui?

Still, I was actually pleased to see that there has been a bit of development in the story. In this issue, the mad monk has found himself moved forward in time to modern days and as the political advisor to a presidential candidate. Who knew he had such aspirations?

Of course, it took an absence of a couple of issues to see some plot advancement. While I’m happy to see some, the problem with this book is that it’s clearly too slow. Reading it episodically is just too frustrating as very little actually occurs in 24 pages. It’s an intriguing subject but the story itself, if you can get past the somewhat scratchy art, is clearly meant for a full-size hardcover graphic novel. 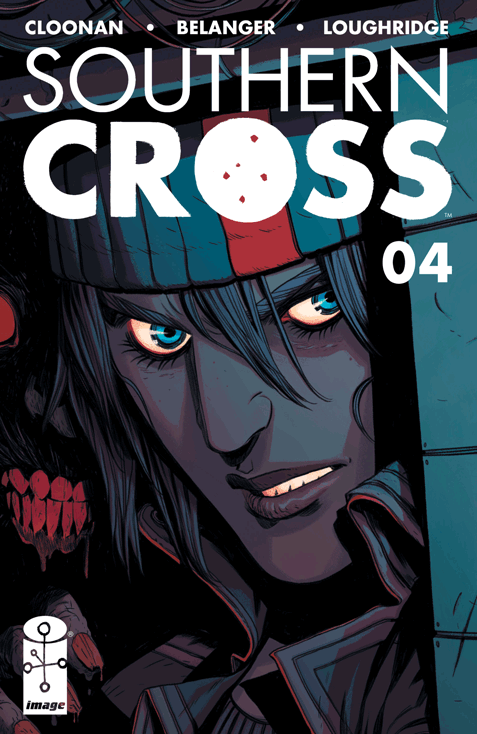 I’ve arrived somewhat late to the Andy Belanger/Becky Cloonan love parade around this creepy space title. I’ve had to go back and read the previous three titles, but it was well-worth the effort. If you like stories that keep you thinking what’s around the corner, then this might be one you want to check out.

What is really appealing about this book is the unkempt vision of space travel. If you’re a typical sci-fi fan, then you’ve undoubtedly been exposed to the sanitized perspective of FTL and warp drives. But in this book, the main propulsion system – the gravity drive – is imperfect, causes hallucinations and requires adjustments, both mechanical and human. As the central feature of the background for this story, there is clearly more to the gravity drive than meets the eye. This is a mega-freaky, dark book that you need to appreciate. 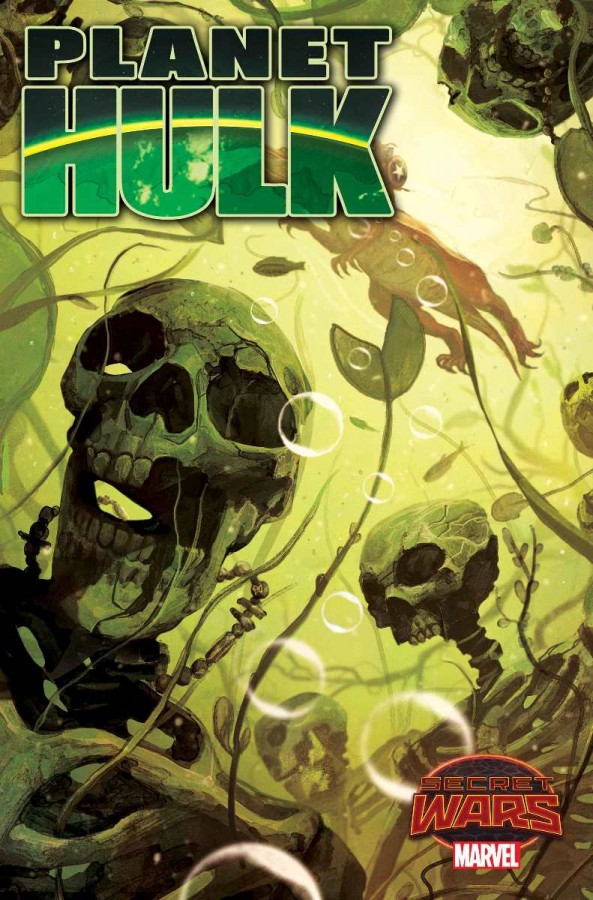 You know, I think this comic is an allegorical form of the entire Battleworld. Greenland – the land of the hulks in this new reality shaped by Doom – is a mutated land, saturated by gamma radiation, creating an entire variety of Hulks, radiated animals and even plants. However, its differences are not unlike the Secret Wars event: the entire Marvel cosmology has been turned upside down and the heroes and villains we once knew have also mutated into different forms.

Still, as weird alien variants go, I actually like it. It’s a basic quest motif with a naïve Captain America (in gladiator style) and his tyrannosaurus rex steed riding off into the mysterious and savage Greenland to find his friend, Bucky. There are elements of the original Planet Hulk event (the Red King, warbound, et.al) but this stands on its own as an inviting and engaging story in its own right, 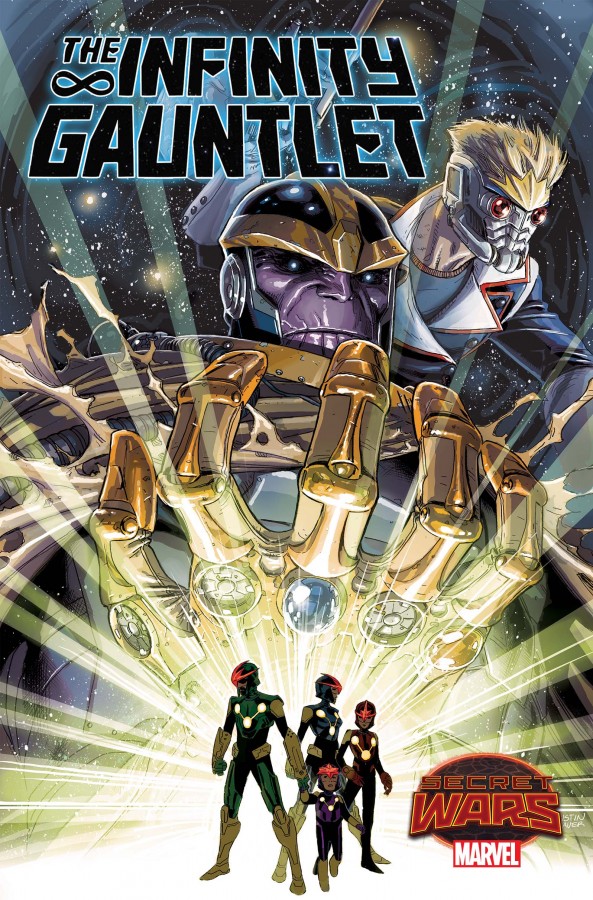 I can’t say I’m overly crazy about this title. To me, the family angle just seems to be incompatible with a mega-villain like Thanos. Plus, the Infinity Stones are a cosmic level story topic and just shouldn’t be thrown together with the Mum & Dad version of the Nova Corps – complete with family dog version.

Here’s what bothers me about the story of this book (sorry for the spoilers): apparently the mother in this has been absent for some time, yet when she finally returns and bestows the power of the Nova Corps upon her abandoned family, the Nova Corps HQ happens to be a short flight away. I just didn’t buy the premise that this family had to suffer while the one who could have protected them was simply a few miles away, in a fortified installation. It just didn’t seem to make sense. 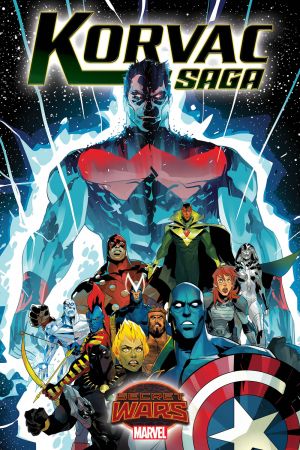 I’m not crazy about Otto Schmidt’s artwork, but getting past it, leave it to Dan Abnett to come up with a thread in the entire Secret Wars event that really captured my attention. This comic holds an integral part to the eventual outcome of the Secret Wars and the fate of the new universe that Doom has managed to fabricate.

Schism is the inexorable surfacing of memories from prior to the construction of Battleworld. The more people have them, the more difficult it will be for Doom to clearly hold existence together. So here’s my prediction: this is clearly what will restore the Marvel Universe to a semblance of its former self and will undoubtedly be the fuel that Reed Richards will need to tap into. 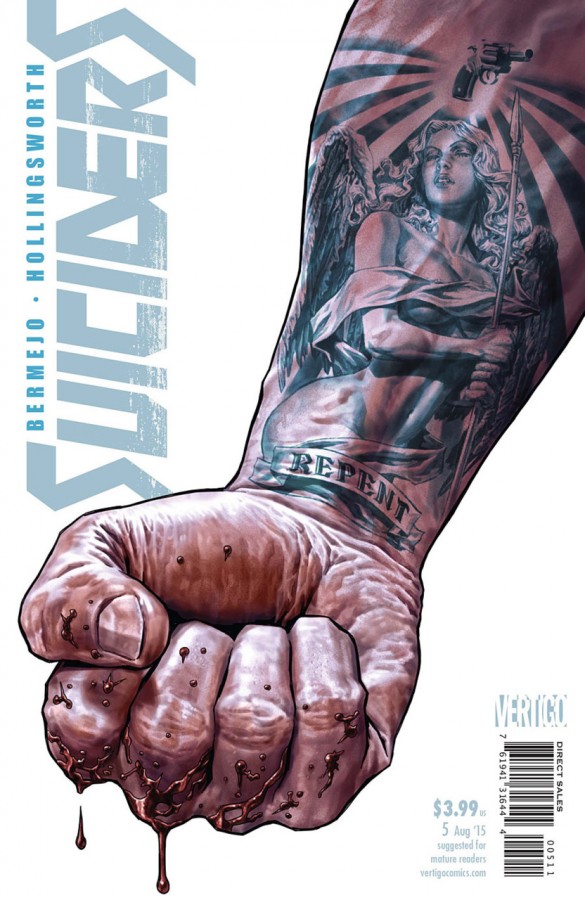 Surely one of my favourite books of late; Suiciders has such a primeval nature to it that it really strikes a hard note of reality into its readers. What does it take for someone to succeed? How far will someone go to achieve dreams of glory and fame? It’s an old theme but still a very powerful one that resonates with readers as they consider what they would do.

I love that Bermejo singlehandedly writes and draws this story. It’s a single vision, pure and focused and is an amazingly entertaining tale. It’s definitely one that I look forward to reading every month.

Well, that’s it for this week. The pick for this week has to go to Suiciders. Bermejo has really caught my imagination with this book and it simply is one that needs a lot more profile. What is really amazing though is that it seems to have come out of nowhere. What I really want to know though is where did he get the inspiration for this story? I enjoy the premise but it has me thinking about its origins.

So, on the last day of school, if a comic has me thinking, then I think it’s fair to say that it’s done its job!