Non-teachers don’t get this, but there’s such an emotional drain on the last day of school. You look at your students and as they enjoy their final day celebrations, you wonder if you’ve prepared them – changed them, well enough for the challenges that they are about to encounter after the glorious summer has ended.

Don’t get me wrong, I’m looking forward to my summer out of the classroom, but I worry about certain students. Still, I have to force myself to look at them form the point of view that I’ve done the best I can and they will do fine if they remember what I’ve taught them.

Change sucks. It’s uncomfortable and people are resistant to it. Take the new Star Trek fan film guidelines, for example. I know that some fan film productions are pretty ticked off with the changes that have been enacted in response to the actions of another fan film production company, but this is a case of looking at change from the wrong perspective. Instead of working with the set of self-directed limits they had before, it’s time to embrace the change and be more creative.

Still, all throughout the summer, I’m going to be wondering if my students will be able to do that.

There’s such detail in this comic. I am constantly amazed by the machinations, the political strategies and the variety of motivation in the storytelling. The variety of characters and the delightful twists make this book exciting and always a joy to pick up. East of West is one of those books that exists on a grand, epic level and I am always surprised by every issue. I don’t know how Hickman does it but I’m glad that he does.

It’s unbelievable but what can I say? It’s Mark Millar. I’ve been waiting for this continuation for too long and I’m very happy to say that my patience has been rewarded. What a great initial set-up and introduction of a new character. I love how Millar is twisting the new forced utopia the world has become under the heroes of this world – only to have their hubris tweaked by the thought that villains who were previously defeated rise up to reset it again. I love how Millar warps our perceptions of these characters, especially with Jupiter’s Circle in the middle of this saga. 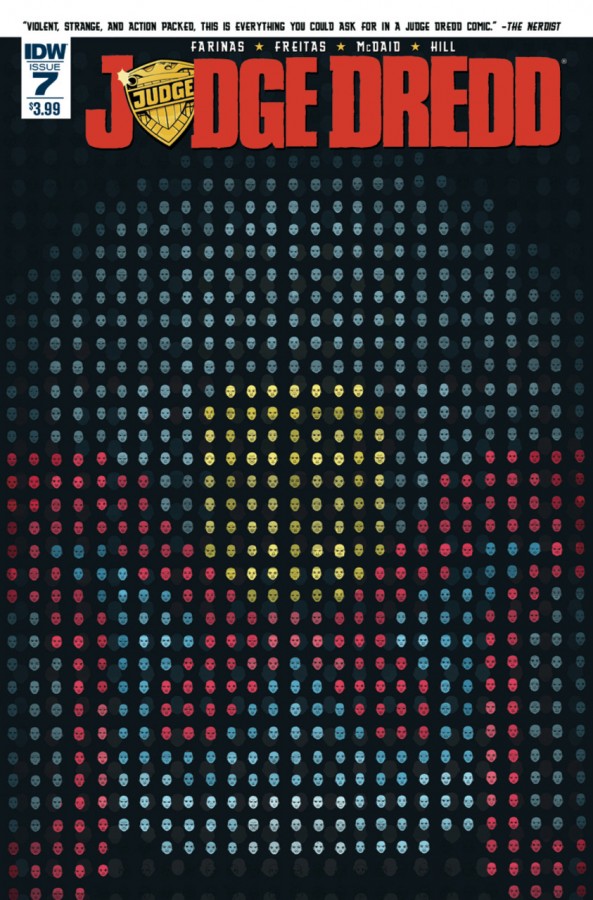 Mega-City Zero continues. I think the draw for me, as a long-time, old-school Dredd fan is the curiosity as to what’s coming next. I love to see characters out of their elements, and this definitely qualifies in that regard. This is an “else-when” story. Dredd has to contend with a completely alien landscape and has to hunt for some sort of order so that he can fit into the world.

However, as much as I want to, I can’t really get into the story. It’s taking too long for Dredd to actually make sense of the new world he’s wound up in. The peripheral characters aren’t really all that endearing to me and Dredd’s fierce devotion to the law – which is his super-power – really doesn’t come into play all that much or it’s pretty much muted.

I’m still curious to see where the story goes, but I can’t say I’m overly enjoying it. 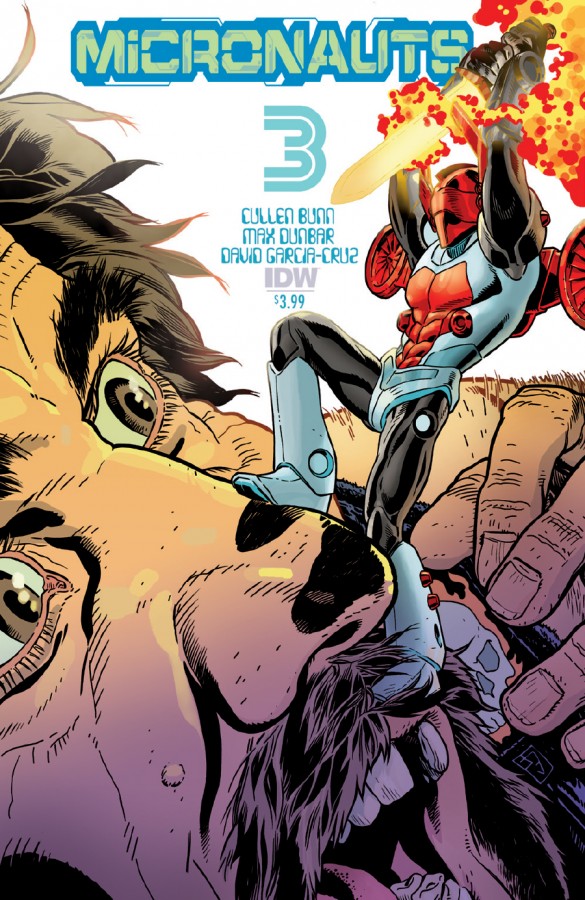 Damn clever book. I’ve mentioned this in the past but the nostalgia of my childhood toys aside, I just love that IDW has the creative latitude to include this book into their title list. I mean, it’s a rare thing to see a re-invention of a comic. While this isn’t the Marvel title of the late seventies and early eighties, it’s a brilliantly new imagining.

Cullen Bunn is definitely an exhilarating talent to read. I have a lot of his work, but his ability to make the fantastic acceptable is certainly a joy to watch in action. I love having this book on my list and I’m always eager to read it. In fact, you add Cullen Bunn’s name to the cover, and I’ll definitely buy it. 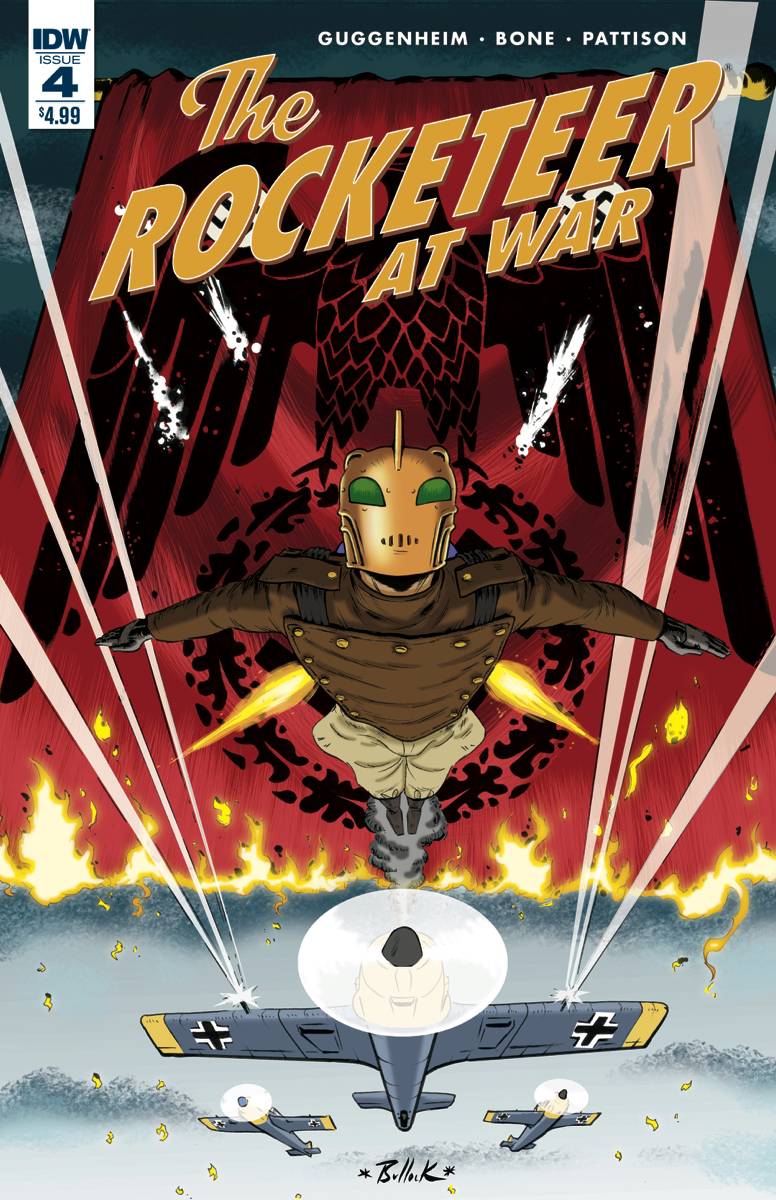 World War II is always a hit with me, but pulp fiction stuff is also an added delight.

Sad to say, J Bone’s art is not the type of art I’d like to see for this book. There’s a dramatic dimension to this story that J Bone’s cartoonish art can’t quite match. Not to say that there’s anything wrong with it, but I just don’t think it’s the right accent for this story.

When I think of the Rocketeer, I think Dave Stevenson. His realistic and sensual art not only managed to capture the period of the story but it also made it a delicious work to devour.

It’s a fun story and kudos to Marc Guggenheim for capturing the 1940’s dialogue and structure. I also love that Cliff has an opposite number in Captain Blitzkrieg, as well as the romantic tensions between Roxy and Betty but I’m having difficulty watching the Nazi villains run up to the Rocketeer with campy fists brandished. I have to respectfully say that I just don’t think the art was the right choice for this book.

Vader has managed to regain his status with the Emperor. But he still has the mystery of the rebel pilot who destroyed the Death Star to solve. Of course, we also see that Vader as his own suspicions about the pilot’s identity which need to be confirmed as well but in the meantime, Vader still needs to do his master’s bidding.

The theme in this book has changed from that of Vader atoning for his disgrace to seeking a new path for himself. It’s difficult to write prequels because ultimately, the reader knows what is going to happen. It’s the challenge of finding new ways that the characters of an existing story can entertain the reader that is a difficult one to overcome, yet Kieron Gillen has managed to demonstrate this skill with ease.

A cybernetic rancor … heh, heh. I love it.

I like this book better than the main Star Wars title. I’ve always been a fan of Vader and hated to see such a great villain die. However, his redemption at the end gave his villainy a sense of poignancy that brought this character to life. Gillen has this sense. Every stratagem is the mark of a master villain. He’s a well-loved villain and this story reflects this richness.

For me, it’s the idea of change. Right now, it’s that time of year when change is very much on my mind as I watch my students graduate and move on to bigger things. Have I changed them enough to survive and succeed in their new school? Have Chloe and Hutch changed enough to be able to effect the changes that are needed to challenge the spoiled sycophants in control of the world?

It’s the timing too. Fans are desperate to learn more about this story but Millar has been keeping this book at bay, creating a demand that makes it so desirable that he could simply list out character profiles and we’d read it out of a ravenous hunger for the story to continue. I don’t know if it’s intentional, but damn, this is such a compelling read that I’m just happy to have gotten my fix this month.

Hey … I trust that the changes that Chloe and Jason will be able to effect will make a difference e in this world and I’m holding out for a great story.

C’mon, Mark Millar … bring me the next issue soon! It’s my summer and I have time for reading!