I’m on vacation. So, I’m looking for something to go along with easing my gravity chair back in the garden under a canopy while drinking a beer.

That’s what’s great about Canada: we have freedom, popularly governed by a belief that it’s something that shouldn’t be taken for granted. We pay for our freedom through tolerance, acceptance and for the most part, the belief that we all have a part to play in maintaining this great country.

We’re not perfect, but we’re working on it, as a Canadian comedian once said. We are undervalued and damn it, we need more appreciation!

I think that’s a shared value we Canadians have in common with comics. We should never undervalue them as mere 24-page short stories. There are a lot of moving parts, anticipation, and yeah, a tremendous amount of focused talent.

So, let’s get to the list for this week and start appreciating! 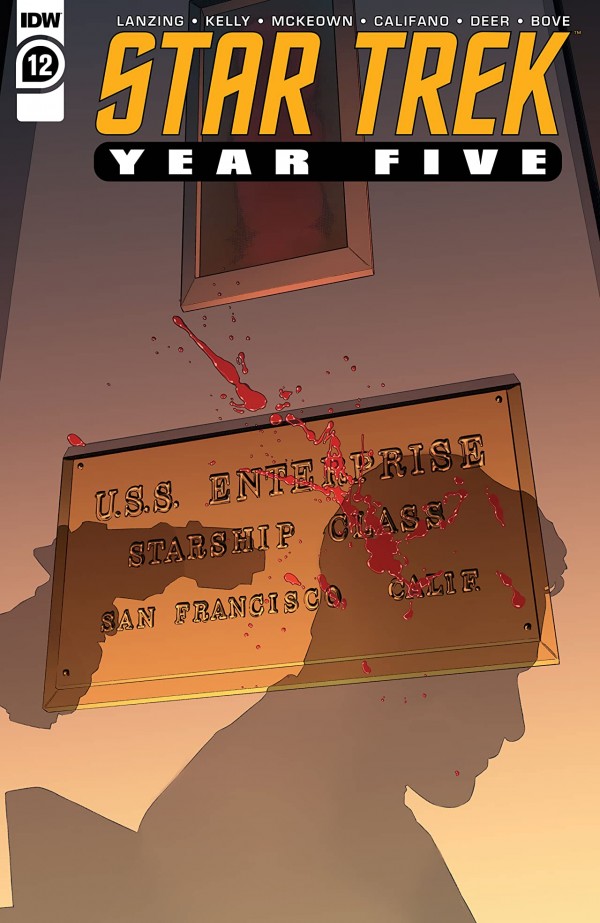 One of the comics that comes to mind for this week is Star Trek: Year Five #12 by Messrs. Jackson Lanzing and Collin Kelly with art supplied by a cacophony of talented pencillers like Kieran McKeown, Silvia Califano and one page from Stephen Thompson.

I have to say, I wasn’t overly familiar with McKeown’s work. Califano and Thompson’s stuff is well known to me as a long-time IDW Trek comic reader, and is well-appreciated. I don’t understand why they were given so little of it to do. I’m going to chalk it up to scheduling and while I appreciated this chance to get to know McKeown’s art, I am already a big fan of Thompson and Califano.

I’m a Star Trek fan – if you haven’t already figured this out – but the thing that really bugs me about Star Trek comics is how much creators want to put their own spin on a property that’s been out for decades. You know what you’re going to get when you watch, but at the same time, there has to be a dividing line between individual creativity and Trek material.

I mean, too much individuality spawned the who Star Trek Fan Film trend, that while was a lot of fun, was ultimately brought down by the entire Axanar debacle. Too little, and you run the risk of boring the pants off your audience by giving them something completely expected. There has to be a line.

I think Lanzing and Kelly have done a very good job of providing us with a story that is in line with what fans can expect out of this original Trek story, but giving us enough surprises that would still be within the realm of Star Trek but offered in a new way, a new combination of elements, so to speak. IDIC, anyone?

Gary Seven was a character who I viewed as a hero, and was originally presented as a possible spin-off character in a show in its own right. Yet, Lanzing and Kelly have turned this character around and viewed him in a totally different manner. In this series, he’s the enemy and in mysterious service to an interstellar agency that will obviously spawn more stories in the future.

Which is the right way to write Star Trek. As much as a creator wants to put his or her own imprint on this franchise, they can’t. what marks a creator’s imagination in writing stories for Trek is how much they can mine out of the series; find something that is obscure and then write a story that explores this hidden facet of Star Trek. There are so many different things to explore – why re-invent the wheel?

I think that’s the big take-away from this book. It’s actually more of a challenge than people think to write Trek fiction for a publisher because of the work involved in finding something to explore as opposed to inventing something new. That’s something I can definitely appreciate. 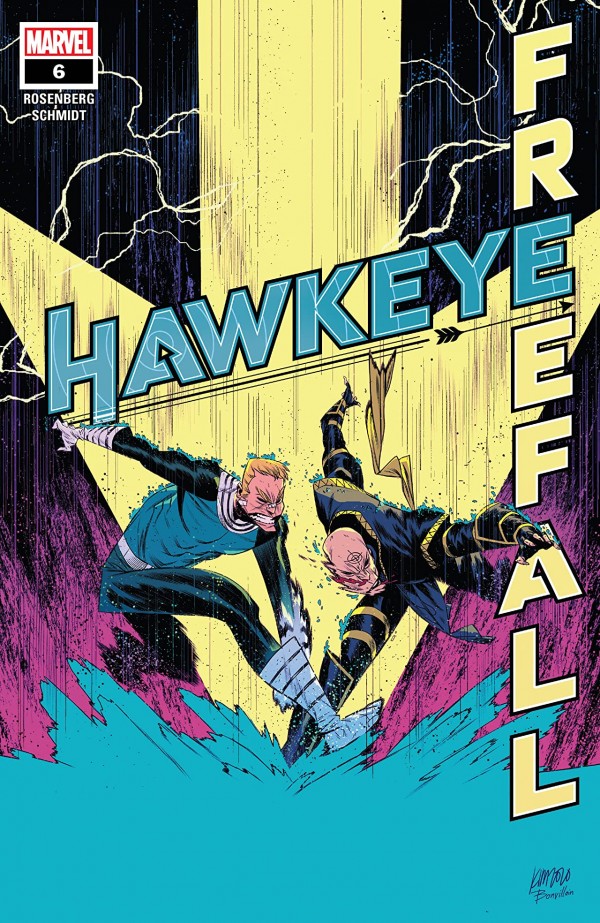 I can’t overlook this book from Matthew Rosenberg and Otto Schmidt. Rosenberg is one of those staple writer talents that has seen his way around various Marvel titles. The guy is definitely going to be one of those writers that readers will look back on twenty years from now as a titan of the industry. He’s built up so much rapport with so many characters in the Marvel Universe that he’s definitely headed for a career that will be known for mastery and expertise.

Otto Schmidt’s work on this book also gives us a graphic display of desperation and a character that is at his end. Hawkeye’s back is against the wall, and he’s a hero with nothing to lose. When you have nothing to lose, all of a sudden, a whole realm of options opens up to you. Schmidt’s art has an emotional resonance that communicates that sense. He uses perspective to reinforce isolation and the colouring also reinforces that sense as well.

This is the final issue in this series and it’s a great length. Hawkeye isn’t a character that can hold his own series, but short ones like these not only give Rosenberg that range of familiarity but also give Hawkeye a chance in the spotlight. He can carry short stories, and that’s a thing we learned in the 80’s with the West Coast Avengers mini-series. Rosenberg is exploiting this character to the best dimension.

Of course, putting him up against both Bullseye and The Hood – two characters that I love to hate – is also a fantastic plot. Let’s face it: Clint is a character who will not lie down. Despite being outnumbered, over-powered, he has an indomitable will that, at least in my opinion, is a prime requisite for a hero.

This is an ultimate show-down issue. It’s the culmination of everything that Hawkeye has worked towards but at the same time, also allows the audience to appreciate why he is a hero – not just because of his ability to shoot trick arrows, his unerring aim or his doggedness – it’s his ability to see solutions outside of the box. Heroes succeed not just because of determination, but because of their optimistic ability to think of ways to overcome their enemies. That’s a superpower that I think is generally overlooked and is understated; but I think it’s something that Rosenberg has tapped into to bring us a great story.

Trust me: I appreciate characters who are at their limit. 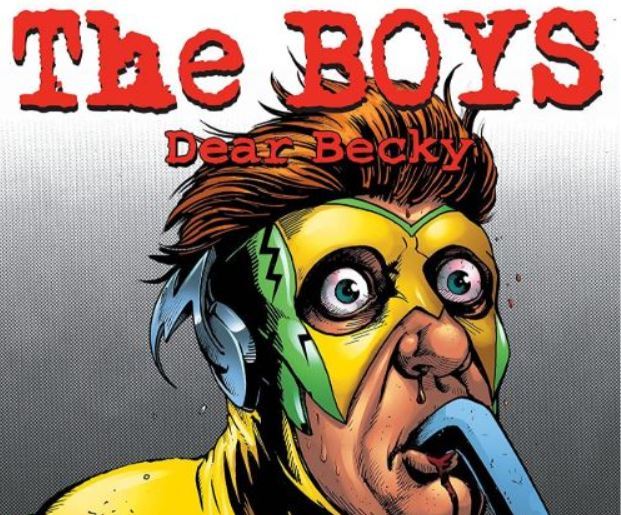 Again, I just can’t say enough about this series from Garth Ennis, Russ Braun and cover by Darick Robertson. Colours by Tony Avina and lettering by Simon Bowland, it’s a book that is an example of why comics need to be appreciated.

Not only is the art completely enjoyable – with a style very reminiscent of Allan Davies, if I may be so bold in saying – but the entire concept is an example of what can be done with comics. This is a series that actually makes fun of the superhero genre of comic storytelling by pointing out the obvious human dimension that while superheroes may be metahumanly powered, they aren’t immune to temptation, vice and corruption. These are the weaknesses of all men and women and they are exacerbated when found in those who are supposed to be above regular human concerns.

Comic heroes are like the Greek gods of old. They have the separate virtues above regular humanity but are still susceptible to human failings, which is why we can relate and learn from them.

In this issue, the focus is on Wee Hughie. Still, wee by the standards of the other members of The Boys – but Hughie is the heart and soul of the group. He is the one to feel first before the others and in this way, he is a check on their consciences. So, it makes sense that he is the one to receive the journal about Billy Butcher’s wife and is the one to relate the story to us. We accept it more because it is related to us by a character we know would appreciate the humanity in it.

Of course, he’s also Scottish, which makes him near-kin on an acceptability scale to me! Scots wa-hay, an a’ thae!

But, despite being about superheroes being punished for their transgressions and failings, it ultimately is a story about our own transgressions and failings. Our super powers are our various privileges that we have in society. If you still have a job during this pandemic, then you’re privileged to have something that someone does not. If you are able to manage your family’s mental and physical health during this time, then you’ve got advantage that others don’t. If you are able to keep your mental well-being in this period of quarantine, distancing and isolation, then you definitely are super-powered.

It’s all about appreciating what we have instead of looking over at what others have and feeling cheated.

This week’s pick is The Boys: Dear Becky #2 – because it’s something that I think we can all appreciate.

Until next week, have a Happy Canada Day – and if you’re in the States – you’ve got a great neighbour to the North! Wish us a good one!