It seems to me that the notion of “the common good” is one that is under-appreciated in our modern times.

I think it’s a relevant notion for when we talk about comic heroes because heroes, even non-powered ones, step up because they perceive an injustice in their world that requires someone to. But you don’t have to be a hero in the dramatic sense to affect the common good, you just have to make small changes. You know, like sorting your garbage out into organics, recyclables, and actual junk, or watching your speed limit when driving. Hell, even just keeping your opinion to yourself when you know that it’ll inflame a situation.

I’m looking for small changes this week. Let’s get to the list. 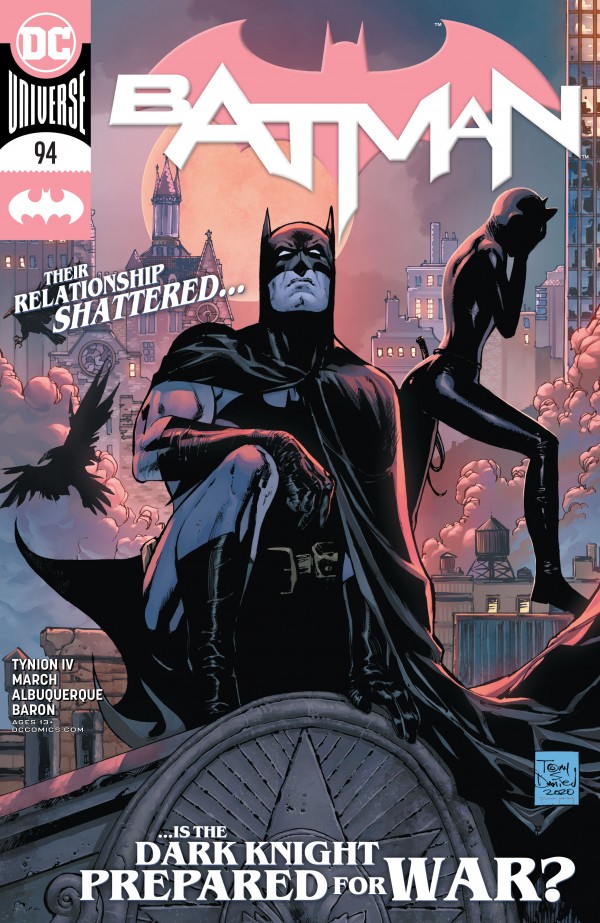 Wow … this is a true spectacle; the art, the dark sombre tone of the writing and the overwhelming sense of defeat that the Batman is experiencing all emphasize the repercussions of just one of his fateful decisions. The Joker has it all and Gotham is on the throes of never being the same again.

You see, I like this issue because it represents a power match-up. Batman is a character celebrated for his talent in strategic thinking; his foresight is like a superpower. In this case, he missed something and the Joker, a villain who has been understated in the past, has managed to outwit him. When it comes down to a battle of wits between historic characters like the Riddler, the Penguin or the Joker – it’s about empire building. While these villains may not have the detective skills to match the Batman, they can match him in building enterprise. In this issue, that’s where the Joker manages to hit the Batman AND Bruce Wayne HARD.

I’ve experienced a decreased interest in Batman titles – but to be frank, DC titles in general, because of this strange new direction they’ve been heading in. It’s like DC Comics is more interested in getting the content out as opposed to the quality of the content they’re putting out.

Where’s the pizzazz in their titles? The events?

Look, James Tynion IV is a veteran. His writing on this book is truly deep, thoughtful and it draws me in. The artwork is dark, defined and also compelling. I’m including it in this review because it’s certainly laudable and needs to be mentioned. However, there needs to be more of this in the DC offerings. I love this and wish there was more of it.

Again … it comes down to decisions. 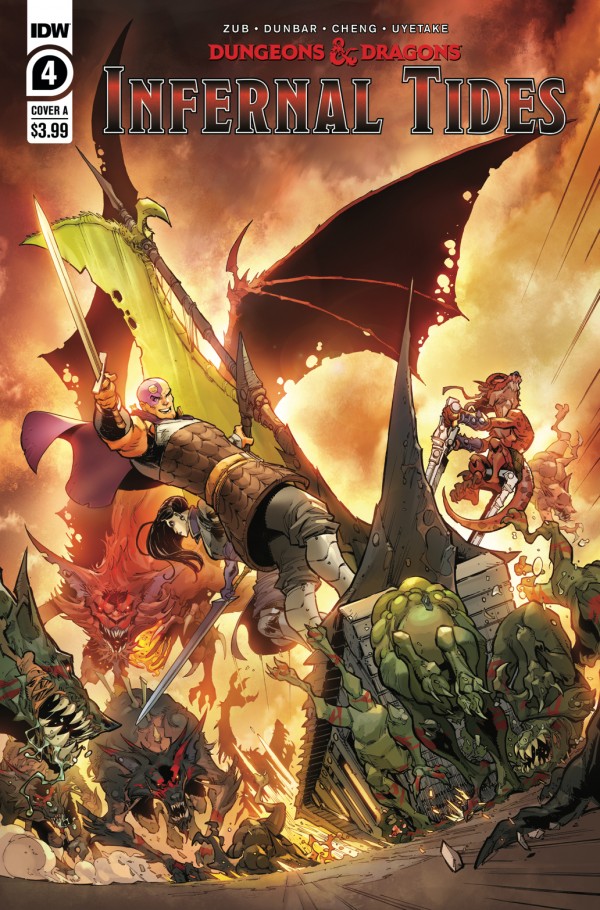 When it comes down to decision-making, fulfilling obligations and minor quests of all sorts. You can’t beat a good adventure of Dungeons & Dragons to show cause-and-effect in character choices!

My favourite line in this story is: “… that is why we must choose our actions carefully and use the time we’re given to serve society.” That’s what the general good is all about, let’s face it. If we all thought more about others than our own individual conveniences more often, then I think this world would be a much better place.

As the City of Elturel runs the risk of being pulled down into the levels of Hell, it’s up to Shandie, Lea, Krydle, Nerys and fan-favourite character, Minsc the Ranger to somehow turn back the demonic hordes of the Blood War.

However, the Hierarchy of Hell has very strict rules, and Krydle of Balder’s Gate has a very telling decision to make in this issue. Great story, lots of true Dungeons & Dragons adventuring and lots of action to entertain even the most seasoned D&D player.

Jim Zub has always had a penchant for this genre of storytelling. He’s good at it and it’s always a delight to read his work. I’ve also been a fan of Max Dunbar’s work, so to see these two partnered on this project is a combination of joyful reading. 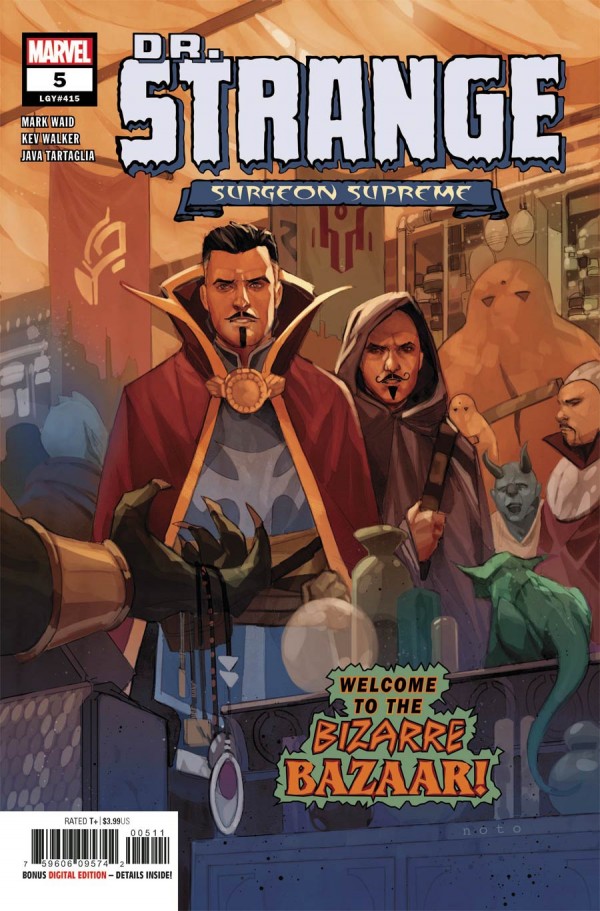 In this story, we see the consequences of not being responsible for one’s own tools. Strange has to deal with an issue that weapons of his own design, from his own magical forge have been stolen and wound up in the hands of some pretty nefarious individuals. Of course, it’s his task to right this wrong by owning his mistake and recovering these items.

It’s a deceptively simple storyline that has a valuable lesson: failure to take responsibility has consequences and stories about the cost of special abilities, in this case magic-wielding, have always held a great interest for me. Limiting a hero’s own abilities provides the reader with a sense that the hero has humility, and that’s a very appealing and relatable feature in portraying one. It adds authenticity and Waid and Walker clearly understand that about this character.

There are quite a few surprises in this story that make it a must for the theme this week. The art is very enjoyable and it is an example of a superhero taking responsibility in order to right a wrong. 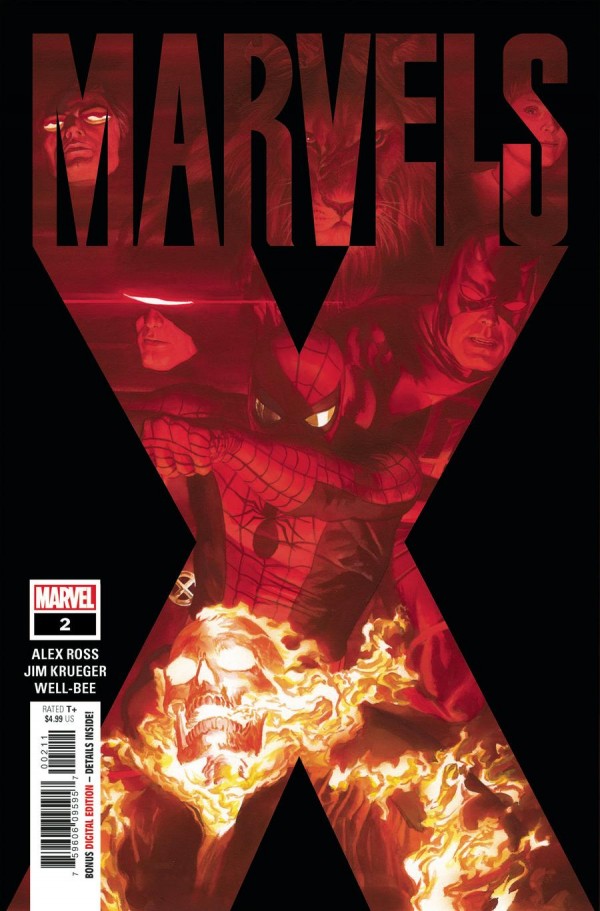 Another example of the recognition of the responsibility that heroes hold with their great power, and who else better than to tell story and teach the lesson than Spider-Man himself?

In this story, the variant of Earth known as Earth-X sees a mysterious plague that infects everyone with super-powers except for a young man known as David. As the last normal human being left, his blood holds the key to saving the world. But, tempted by Kraven the Hunter, in a mutated form, David needs to learn a lesson about making a choice with that great power.

Staggering art by the legendary Alex Ross and an introduction to new art from Well-Bee, whose work I am not overly familiar with, this was a comic with a basic reminder of why heroes are heroes; not because of their super-powers but because of the recognition of their abilities to make changes in the world. 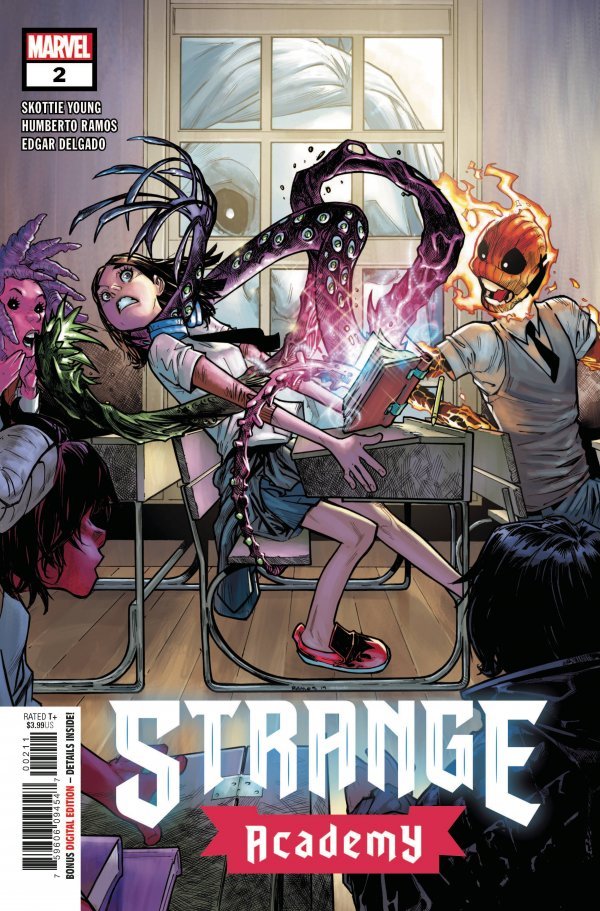 Another chance to see the world of Stephen Strange in action as we take a look at the one place where people are supposed to learn about their impact on the world, or in this case, the world of magic: school.

As much as school is supposed to be about learning about the material things in the world, or in this case, the immaterial things as well, young people are more often oblivious of the effect their actions can have on the world and people around them. Stories in a school environment are great opportunities for reminders of the power young people can have.

You know, in a school of such diverse creatures, it’s amazing how simply being invited to accompany someone to class is such a small gesture, but it is an accepting one that can have a tremendous effect on the well-being of another student. We forget how unforgiving and painful school can be. Awkwardness, shyness, insecurity for a variety of different reasons – all these can be obliviated by a basic act of kindness.

Respect, diligence, resilience are all aspects of the responsibility we have to each other in this world. While they aren’t overtly taught, their importance as lesson subjects often gets overlooked in school. While teachers may give explicit lessons, they are more often than not, implicitly learned. Skottie Young has a gift in not only presenting playful writing that conveys the essence of young people so well in his writing, but it’s wonderfully augmented by the playful spirit of Humberto Ramos’s work. This is a truly enjoyable pairing for this story and definitely my favourite one for this week.

You see, kids not only need to learn responsibility but the endurance and resilience that is required to see the responsibility through. It starts with small changes though and these are changes best taught in a learning environment. While all learning environments aren’t always schools, in this case it makes a great backdrop for a story that has this type of thinking.

Maybe it’s just the teacher in me, but this title is the pick of the week in my opinion. I love the banter, the rhythm, and the fact that all of the characters have a lesson to learn in this issue while there is a background lesson waiting for them in the wings. This is not just the epitome of teaching but it also represents a mindset present in teachers’ mentalities that there is always a bigger picture; connecting to which, is a Teacher’s purpose.

I related to this book, not just from a teacher’s perspective, but from one that represents a value that should be applied to the common good. Education is a value that western democracies have laboured to build and aspire. It is of tremendous value and needs to be fully appreciated. This comic not only underlies the fundamental importance of it, but provides a structure that a reader can understand, appreciate and assimilate. After all, where else to learn about the values of tolerance, respect, rights and freedom is in a school setting where these things can have context and understanding?

Until next time, I hope your week is filled with these “commonly good” values. If not, send me a note! I’m a teacher!

Pick of the Week: Strange Academy #2