I think a shared experience of this pandemic that people can relate to is when you get a day of absolute, complete and utter boredom. You see the same things every day, get into a socially distanced routine when you go out to get supplies; or your temper flares as your patience with the people you’ve been sharing your house with for the last four months finally gives out.

Yes, it’s been one of those days today and to break out of the cycle of mind-numbing boredom, I’m putting my faith in comics to show me something exciting!

Of course, when there’s a new Star Trek comic, that gets my motor running. So, this week, I’m focusing all my attention on IDW Publishing’s Star Trek: Deep Space Nine—Too Long a Sacrifice #1 by Scott Tipton, David Tipton, Greg Scott, Felipe Sobrreiro and Neil Uyetake. 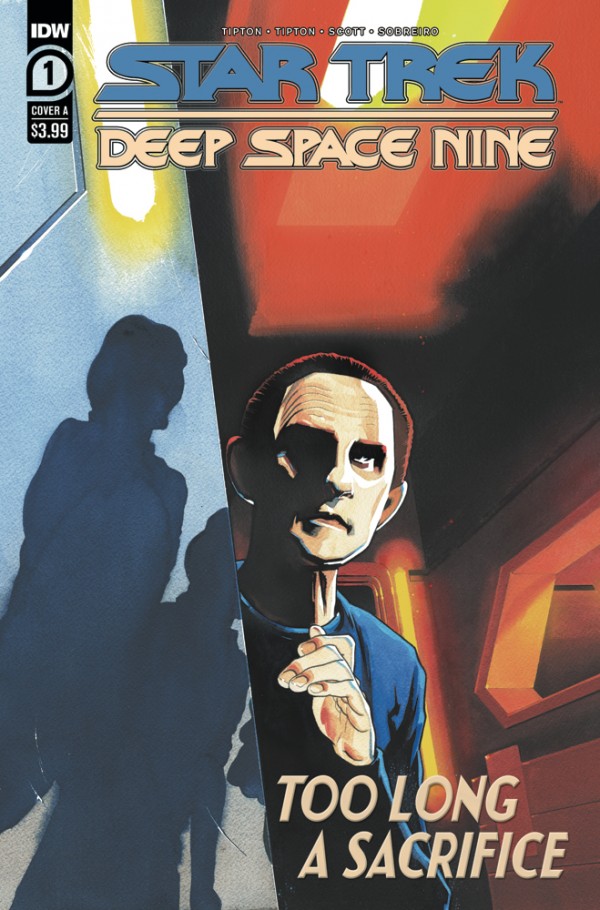 If there’s anything that can drive the boredom from my mind, you’d better believe it’s Star Trek.

Here’s the basic premise for the story. Set during the period of the Dominion War, the focus is on Constable Odo as he investigates what seems to be a terrorist attack destroying an eatery frequented by Dr. Bashir and everyone’s favourite spy-turned-tailor, Garak.

Let’s start with this. First off, it’s a completely and enjoyably acceptable premise. The Federation is at war with the Dominion, DS9 is on the front lines and there’s nothing that I like better with a crime story for Odo to figure out, filled with all sorts of suspects and yes, even a slight hint of intrigue, courtesy of Garak’s involvement. There’s nothing to criticize here; it’s a story well within the boundaries of what fans liked about this show and there’s nothing wrong with giving the fans what they want.

I think the choice of time periods for setting this story is absolutely spot-on. If this were a story set in the first or second season of DS9, it’d be a hard sell. But, arguably, this is the best time period for this show. Frontline action, plenty of combat and enough room left over for stories with poignant and significant messages. Themes of honour, bravery, and … yes, sacrifice. The choice to set this book in that time sets the reader up for the expectation of those themes to come out in this story.

However, when you have Star Trek fans like Scott and David Tipton who are both knowledgeable and talented in their Trek storytelling, this is expected. I have never been disappointed by a story from these creators.

… No pressure for the rest of the story, guys.

In terms of characterization, the Tiptons’ Trek-savvy is also apparent. I mean, when you think about how much familiarity these guys have with this franchise with all of the other titles they’ve written for IDW, not only is this their area of expertise, but applying that to a long-overdue comic adaptation of this particular iteration of Trek makes it all the more sweeter. I can confidently say that I’ve looked forward to this for a while now.

But the dialogue, the description of tasks and orders – even the paranoid, petulant expression on Quark’s face are all representative examples of how intricately these guys have mastered their characterizations and it just goes to prove, that there is so much imaginative fodder still in the cornucopia of Star Trek, that new and entertaining stories can still be written. That is the essence of fandom and these skilled and talented writers give this story its due respect and its place in comic storytelling.

Looking at the art, I’ve never seen Greg Scott’s work before. I mean, I know of some of the projects he’s worked on (Gotham Central, Archie, et. al.), but this is my first time writing about it. My impressions are gritty, film-noir sort of vibe to it and very dark. It may not be the type of art I’d associate with Star Trek, but it is the type of art that works for this story.

Odo is basically a police officer. He’s responsible for the investigation in this story and is the Chief of Security for the space station. This story is about a mystery, filled with political/military intrigue and a list of suspects and interfering characters that you’d find in any detective story. Scott’s art is very appropriate for the story and very poignant.

I love the variant covers. In this case, there’s another cover painted by J.K. Woodward. I’ve been a very big fan of his work in the past and it’s great to see a Woodward submission on this book. In fact, IDW has split his work into two covers – one with a title and one without. The titled one also lends itself admirably well to that noir attitude with classic 40’s lettering in the title. As Woodward is a Star Trek fan also, it’d be great to see more of his involvement with this book.

Was I excited? Yeah – it definitely added a level of enjoyment for me today. I miss this show. It was great to see some of my favourite Star Trek characters – O’Brien, Dax, Quark and Bashir – in action again. An under-rated show that had a rocky beginning because it seemed counterpoint to the idea of exploring space, in that space came to them. But, the imagination of the writers persevered and prevailed, giving us a series that rightfully earned its place in the Trek continuum.

Scott and David Tipton clearly get that too. It was a great read and I’m happy to declare this one my pick of the week! It was exactly what I needed and I’m sure, if you’re like me, you’ll agree!

What a great excuse to escape the fortress of solitude and get some great reading!

Until next week, stay safe and read more comics!