Yeah, that’s what I’m looking at this week. I want a title that’s going to absolutely shock me out of my willing suspension of disbelief. I want something to read that’s going to just floor me.

I just learned that CCO, Publisher and President of IDW Publishing, Chris Ryall is stepping down to move onto something new.

Does this freak me out? A little. Not being an employee of IDW, but from the outside, I found Chris to be a personable and accessible guy; someone that you could just drop an email to about a comic-related issue and actually get a response.

In a public bulletin from the PR company that represents IDW that was released a mere few minutes ago (from the time of this writing), it was announced that Chris would be moving on to new “a new storytelling venture focused on the disparate worlds and character that he brought to life while at ODW Publishing”.

My personal response was: what the hell?

You see, and this is totally from a personal perspective, I’ve always found Chris Ryall to be an affable, approachable and cooperative guy with a very diplomatic and charming aspect. This is a guy who not only is a dyed-in-the-wool comic lover, but a business professional with a sleek acumen.

While I’m concerned about the future of IDW after this announcement, I also know that the guy is going to do some pretty damn innovative things. The vibe I’m getting from people I know in the industry (despite my overt distanced location up here in the Great White North), is that this guy has something up his sleeve. You don’t walk away from positions like these, from a well-respected, market-placed company like IDW unless you have something up your sleeve.

In the last few minutes that I’ve had to process this news, I think I already have some speculations as to what he’s going to do with this announcement. However, rather than start rumours, news with false expectations, and what-not, I’m going to keep those to myself rather than provide gristle for the rumour mill.

Suffice it to say though, that this is a guy with a plan in his back-pocket. I can see a new publishing company emerging as Chris Ryall is a guy who has learned some pretty good lessons in his time. Now, it’s his time to put those lessons into effect. I have personal bets with myself as to what he will do next, and I’m eager to see the future develop.

However, I’m still shocked and that’s the theme for this week as I look at comics this week that will completely leave me stunned by the story developments of the creators who tirelessly render to leave me and the rest of you loyal comic readers … stunned. 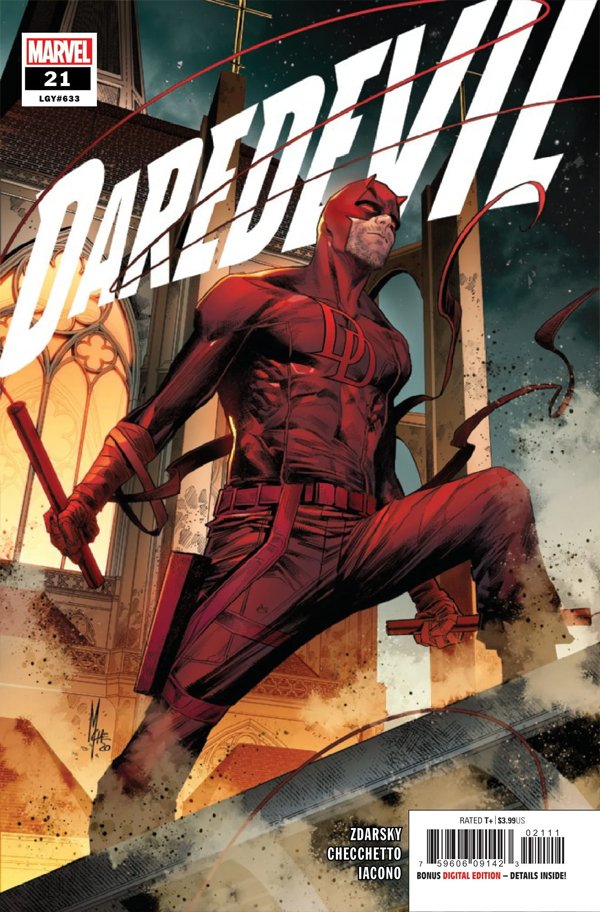 First of all, I need to give a great big shout-out to Marvel Comics for not messing around with the regular order of things! I’m all good with change, but to attempt a change during a freakin’ world-wide pandemic is NOT the time to mess with scheduling, delivery and such matters. In times of weirdness, we need some degree of normalcy to cling to in order to adapt to the new changes. So, Marvel Comics … thank you.

Catching up from last issue, an unlikely team-up of Daredevil, Detective Cole North, Typhoid Mary and the Kingpin manage to thwart the assault of many of Daredevils’ regular villains’ list on Hell’s Kitchen. However, instead of taking a victory lap, Daredevil gives himself up to custody of the New York Police Department, and at that shocking conclusion, that’s where our story begins.

This issue, titled “Truth or Dare – Part 1” sees the beginning of an arc that involves not just legal machinery that will be needed to see Daredevil through his way back to redemption but to also allow him to prove his own worthiness to himself.

I’m not too fond of the term “Catholic Guilt”, but it is one that can be used to describe the conflict between entitlement and self-recrimination. In this case, Matt Murdoch is struggling with the level of responsibility he has as not just a super-hero but also an officer of the court who is obligated to follow the rules of society, law and order and the conflict between these two roles is truly a difficult one to navigate.

I like Chip Zdarsky’s development in this regard. It’s a powerful drama that builds on the fruits of previous character engagements to date. Cole North was initially a firm advocate against vigilantes, but he learned from Daredevil that good people know when to apply the rules of law and order and how much of them to apply.

There’s an understanding in this storyline that great power which equivocates to great responsibility is best meted out by those who have a good conscience and judgement. Who watches the Watchmen? Themselves.

However, Matt Murdoch willingly surrenders himself to the cogs of justice, with a plan in mind, but that also shows his commitment to the system of laws that he enforces but that he is self-admittedly accountable to. It’s a true drama, but one that is sure to shock readers.

I have become a major fan of Marco Checchetto in following this book. There are shadowy areas where Murdoch, North and Foggy Nelson will have to traverse in getting Daredevil justice, and the dark-toned combined efforts of Chechetto and Mattia Iacono really emphasize the emotional journey that Daredevil undergoes to not only prove that he is of worth to the justice system, but that he is also observing a moral code that he is of worth to himself. The muted colours provide an environment that highlights the emotional resonance of the pencilling – it’s a perfect storm-yielding, shock-reading experience that makes my pick of the week for this run.

Daredevil #21 really caught my eye this week. It’s a perfect execution of character understanding that yields a stunning reaction. The way that Daredevil responds in successfully defending the neighbourhood he has sworn to protect yields a complete non-reward. This is the essence of Marvel Comics – a hero who succeeds yet is not recognized for his works. When the mayor of the city – a super-villain himself – is able to order officers of the law to arrest a hero for murder and he willingly acquiesces: THIS is the essence of a Marvel hero.

Which is shocking, in a way. I mean, it’s so true to the spirit of Marvel Comics, the ideal of a hero who does not expect a reward for his/her actions and that it is so unexpected that a vigilante should surrender himself to a law enforcement agency under the control of the likes of a villain like the Kingpin.

It’s also a shock, because it’s the type of thoughtful human drama that is often difficult to achieve in comic writing. Often storylines get broken up because of publishing deadlines, but this one was able to get the entire poignancy of a vigilante (who is secretly an officer of the law) surrendering himself to the system, that in this case, he is outside of.

There’s enough here to get you thinking.

On that reasoning alone, Daredevil #21 is the pick of the week. Make sure you are supporting your local comic books stores with phone calls, emails, curbside pickups and wear a mask. Hey … it works for vigilantes, right?

Pick of the Week: Daredevil #21