Happy Fourth of July to my American readers. The great thing about your holiday is that it heralds new comic Wednesday! There’s a good deal of time to enjoy the day, read some comics, see some fireworks, and do what we do on our own nation’s birthday, I suppose, which happens to fall three days before your own.

It’s a short, quality-rich list this week. And that’s a good thing, given that the weather is finally cooperating and we are looking at some seriously summer days. Let’s get to the list:

It’s the conclusion that I was waiting for. Not only does this wrap up Mark Millar’s and Frank Quitely’s epic saga in a thunderous conclusion, but it also means a better life for not just the ruling family and other supers, but the entire world.

I’ve been noticing a consistent theme in Millar’s recent works. it’s one of positivism and instead of focusing on the dystopic nature of the world, as a lot of other comic creators do, Millar’s characters not only right specific injustices, but they also improve the lives of everyone around them. Millar’s heroes affect more than just the immediate, they have lasting and persistent benefits on their world.

I think Jupiter’s Legacy is a perfect example of this idea. After all, not only do Chloe and her family seek to redress the wrongs made by her uncle and brother, but they also end up rehabilitating super-villains and restoring the world order. Super heroes aren’t just crime-fighters, they’re public servants who have the highest trust. They are the ideal of what we want in our own public servants and Millar realizes this dream for us and in the end, leaves us with sense of wish-fulfillment that makes us wan to read more of his work.

Imagine: a story that makes you feel good about yourself after reading it. Huh, what a concept.

I miss the days of the House of Mystery. Remember those comics? Anthology-based comics with short, succinct stories that flitted from one moral to the next? I used to keep a stack of them when I was a kid. But it just wasn’t the variety of stories, it was the surprising depth each one of those stories had. I learned so much about the human condition, various topics, and even how to write a short story from these books.

IDW is looking to do the same sort of thing with this comic. Though it’s one tale and the host of the Diablo House is a Californian surfer-dude instead of a psychotic custodian, you can appreciate what Ted Adams and artist, Santiperez have done here.

I did have an issue with the length of the story. If they really want to imitate the style of the anthology comics DC used to put out in the seventies and eighties, then this book needs to have a sharper focus. The best stories are short ones and anthologies are king when it comes to short stories.

While the first issue was a little awkward getting off the ground, I admire the concept and really want this to succeed. After all, they don’t make comics like this any more and IDW is to be commended for its willingness to experiment by bringing an old style of comics back.

The War of Jokes and Riddles continues with part two. What an elaborate piece of fiction. Though this is merely a connective episode, if seen in a greater context like a full-length graphic novel, you can see the bridging between part one and the rest of the story to be. Tom King has certainly proven himself to be a master story plotter in the immensity of his vision.

You also have to really enjoy the calm and ethereally serene way King describes the Riddler to his readers. This is not the zany, manic-obsessive Riddler that Batman fans are used to; it’s as if King had some sort of a template of a master villain already in mind to serve as an inspiration for his re-invention of this classic Batman foe.

Mikel Janin gets full props for his amazing artwork. It’s simply gorgeous to apprehend and definitely adds to the fluidity of the story.

King is hitting home runs and I haven’t seen a story from him that I haven’t liked. I’m looking forward to picking this up in a full hardcover when it eventually hits the shelves. For now, I can be patient and wait for it to come out, one comic at a time. 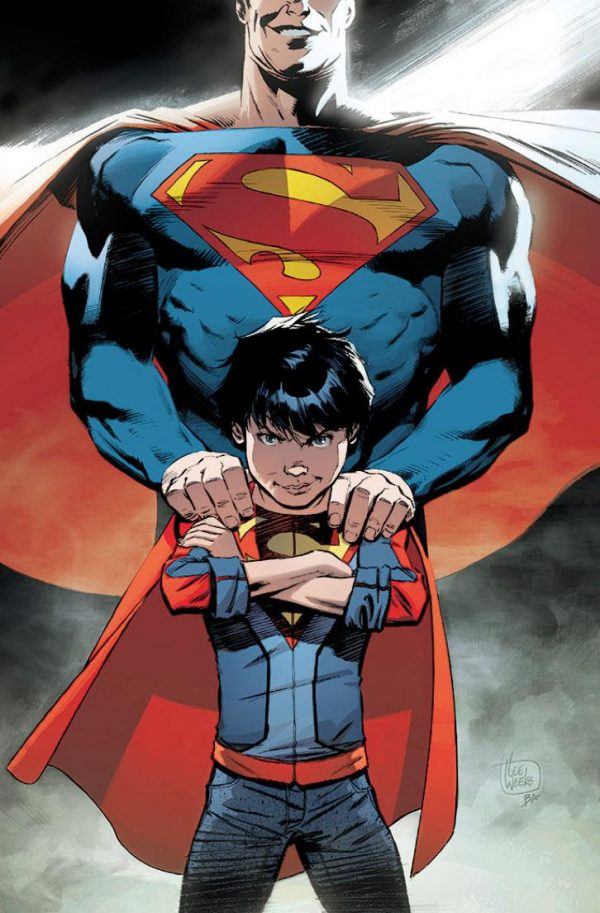 Titled “Brains vs. Brawn”, this is a delightful story about the eternal struggle of parental wisdom falling on the deaf ears of a child. Trust me, I’m now beginning to enter into those years with my own children and this is a story that resonates very strongly with me.

As Superman instructs his son in the ways of correctly using his powers, he also reflects back upon the lessons his own father taught him. It’s a familiar life pattern: as a parent teaches a child, the words said to them by his or her own parent comes back to haunt them. There comes a time when we really do begin to see our parents in our characters as we care for our own children. It’s a poignant life lesson wonderfully written by Michael Moreci, and you have to wonder about the inspiration behind it.

I have to say, I think I learned something from this story. After all, my own kid is her own person and while I see the mistakes she makes, at the same time, I have to appreciate all the great strengths and abilities she also has. She’s my hero, just as I am to her. Thanks, Michael Moreci and Scott Godlewski for being the Pick of the Week.

… And that’s a perfect book to end this review on. A holiday comic for a family holiday. See you next week.

Pick of the Week: Superman #26