It’s doubtful that I’m going to get a lot of feedback to this week’s column. After all, this is the night before San Diego Comic-Con and it’s a good bet that folks are either just flying into San Diego or are at least on their way to Comic Mecca, with visions of four-colour heroes and genre-based celebrities in their heads.

I’d love to be there right now. Last year – aside from a few moments of awkwardness – was an amazing experience, and it looks like this year is going to top the previous one.

To all of the comic aficionados and fanboy/fangirls there – have fun; for those of who can’t geek out: we salute you. 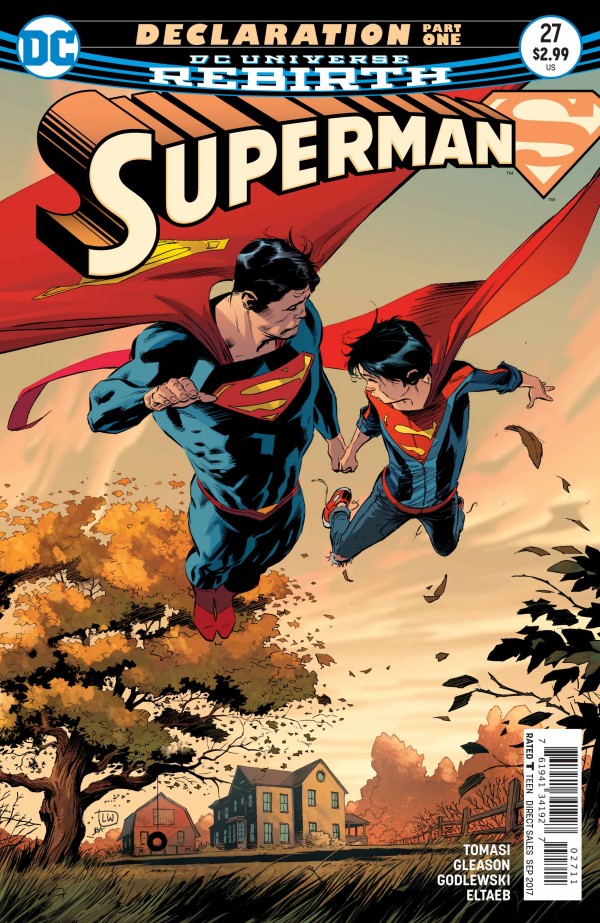 There’s a wholly holy wholesome vibe to this month’s offering from co-writers, Patrick Gleason and Peter J. Tomasi and artist, Scott Godlewksi. Part one of the story arc, Declaration, sees the Kent Family exhausted, showing that it’s not just the hero who feels the strain of saving the world, but also the family who supports him.

There’s also a great deal of Americana in this issue as well. While that may not seem strange to the primary audience of American readers of this title, as a Canadian, I had to stifle a laugh at the fact that one of the places the Kents drive to was Niagara Falls. Of course, everybody knows that the best part of the Falls is in Canada!

There’s a lot of US History to read as the Kents endeavour to cross America and take a well-deserved vacation, which makes this an educational book to read. It’s refreshing and, like I said, wholesome. It’s also a throwback to the time when Superman stood for the ideological perspective of truth, justice and the American Way. 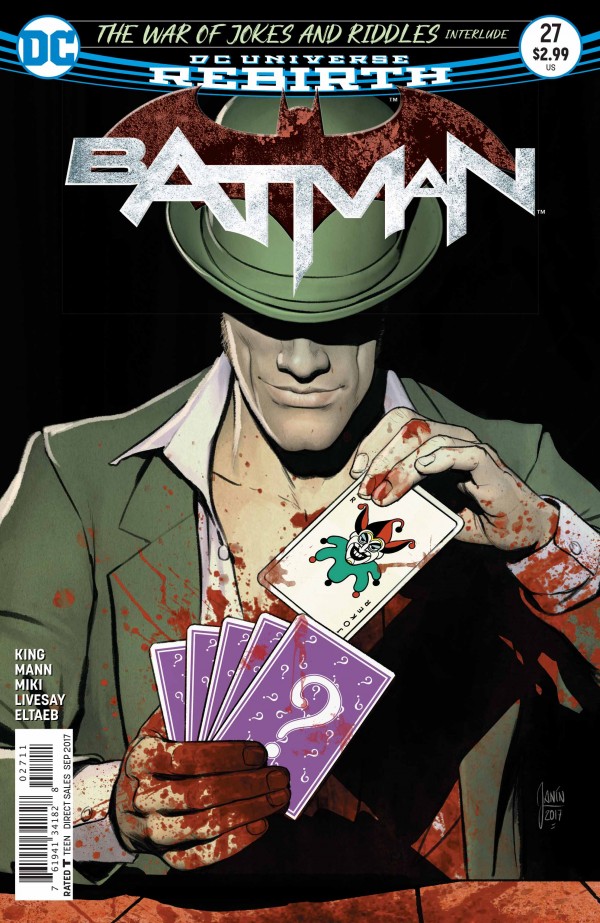 Then there’s the darker side of the moon.

Tom King and penciller, Clay Mann, present to us an interlude within the story arc of The War of Jokes and Riddles titled The Ballad of Kite Man, Part One.

It’s poignantly sad, but as a dad, any story that has to do with the suffering of kids really affects me. I’m sure Tom King can relate to that, which makes it more meaningful and accurate. However, when you consider that this is also the origin story of one of the most ineffectual villains ever created, then that the suffering of the child in this story actually seems somewhat blunted. I have to say that I couldn’t really get into this one. While it may have seemed to have some characteristics of dark humour, I just think it missed its mark.

I felt sorry for Kite Man and I think I wanted to continue to, but it’s hard to reconcile his suffering with the clownishness of his origin.

But, maybe I’m wrong. After all, this is Tom King we’re talking about, right? 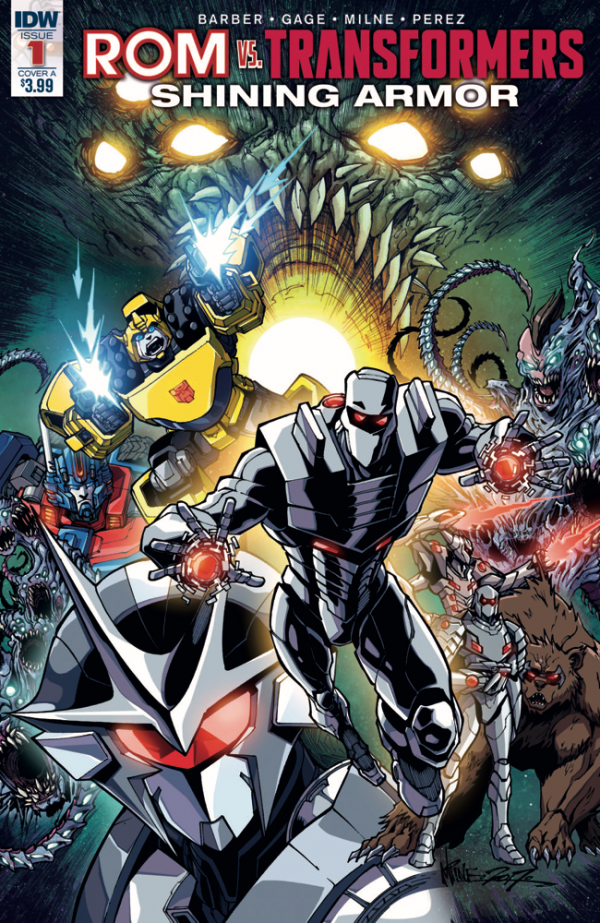 Heh … hard to ignore this. If you grew up in the 80’s then there’s no way that you could have missed being exposed to these classic and recognizable 80’s properties. Of course, it’s up to IDW to mesh the two together into a shared universe where the ultimate match-up has to happen.

Written by John Barber and Christos Gage and drawn by Alex Milne, there is a real theme of the outsider trying to fit into a society that doesn’t’ trust her in this book. I have to say, it took me my surprise and I also have to admit that I quite liked it.

Stardrive – a Cybertronian child rescued by ROM and brought up as a Space Knight, is the focus in this book, rather than ROM. It’s actually quite touching and I confess that my heart went out to Stardrive as she labours for the acceptance of the society that she has sworn to protect. This is a heroic virtue and one that goes beyond the toys of the 1980’s that these books are based on.

Societal prejudice combined with the ignorance of an orphan’s own culture makes this a very compelling tale. I have to give Barber and Gage a great deal of credit for making enjoy this book. I wasn’t really a Transformers fan in the 80’s but there is no doubting its influence back then. However, I really found this book a compelling an enjoyable read. I’m going to keep up with this mini-series as it’s definitely an example of the sterling work that IDW puts out when a franchise is entrusted to its care. 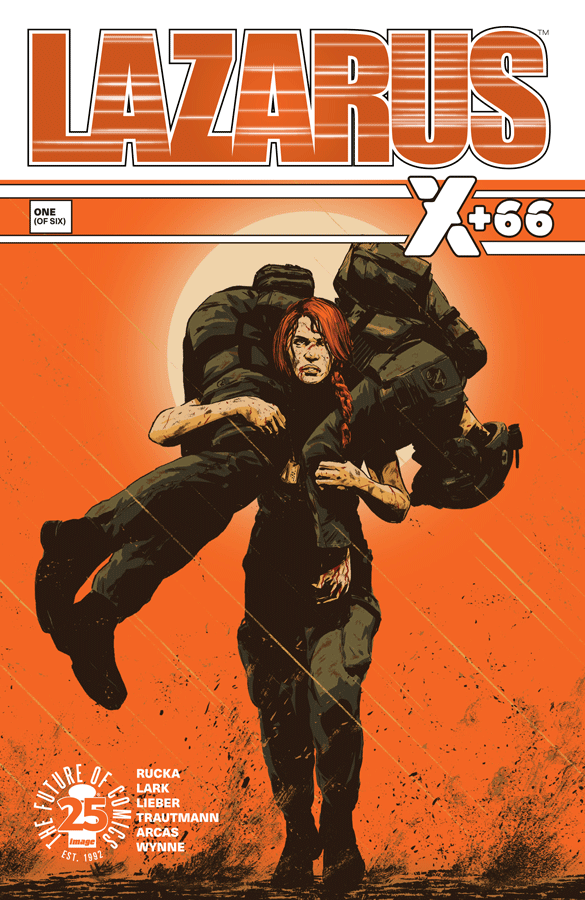 This is a mini-series co-written by Greg Rucka and Eric Trautmann and drawn by Steve Lieber.

I was a bit taken aback by this. After all, I’ve pretty much heralded Rucka and Lark to be somewhat on a demi-godlike status when it comes to one of my favourite comics. Actually, I’d have to say that this is probably the most original comic I’ve read in ages and it is ALWAYS on my pull list.

But this is a mini-series, aside from the regular story, that is designed to give Michael Lark a chance to recharge and refresh, despite the fact that Lark has drawn the cover for this book. Also, I can’t help but notice that Greg Rucka’s name is still on the writing credit list as well.

Seems like neither of them really understand the concept of taking a break.

However, I don’t care. I love this comic and can’t get enough of Rucka’s incredible world-building and Lark’s gifted artistry. This is a comic that epitomizes the art of graphic storytelling and it’s incredibly addictive.

This is a classic military training story. It’s simple but powerfully poignant in that it shows the dedication and willpower involved in becoming an elite military unit. We see Sergeant Casey Solomon, the serf solider who saved Forever Carlyle in training to become a Dagger – the elite unit military units who rise by merit to become something of value to the Carlyle Family. … And she does.

I’m actually surprised that a story by other creators could hit me with the same impact as a story created by both Rucka and Lark. But, as I said before, I can’t discount their involvement in it.

But still … it’s the worldbuilding that makes this such a compelling story in any format. In fact, I’d suggest the notion that Rucka should announce a story-writing challenge, inviting new creators to submit their own scripts, they’d still get an amazing story, when talking with Greg back in March, I learned just how detailed he can be in creating a world. With that sort of a foundation, it’s an enjoyable and exciting prospect to write in this universe. I think Trautmann must have had a blast in contributing a story like this.

…. And it’s awesome. While I don’t think the art was up to the “Lark-level of excellence” that I’ve grown used to in this book, it was enough to convey the sense of determination on Solomon’s part to complete her initiation and become a Dagger. Hell, even I want to become a Dagger after reading this story! Even though it’s just a sideline mini-story, this is an excellent ancillary read and it makes sense that this should be the pick of the week for this week’s installment of comic reads.

I love this world. It’s apocalyptic and it is definitely scary, but the level of detail and the amount of effort that has gone into its creation makes this not just my favourite story this week, but one of my favourite comic titles. Lazarus is such a novel and bleak story that it demands not just increased readership but its own television series. With the emphasis on powerful female leads and the proliferation of television adaptations of comic stories, this is the story that I think is easiest to transfer over to the small screen. Any sort of innovation that Lark and Rucka can supply just makes that concept even more concrete.

Hell, if I can see it, then why can’t we hear an announcement at SDCC about this?

Well, maybe next year … and if that’s the case, then I’ll be there to hear it! Kudos to Trautmann and Lieber for doing due justice to this title and for Rucka and Lark for just letting go a little bit. They created the sandbox and it was really generous to let someone else play in it. Perhaps they’ll take my suggestion and let others paly in it as well?

That’s is to for this week. Good luck to all those SDCC attendants! Hope you have tons of fun!