Super heroes aren’t doing it for comics any more.

Seriously … when’s the last time a super hero comic really grabbed public attention? For me, Moon Knight is my choice, but even still, I find that it’s an exception to the rule and I’m drawn to more non-super hero books than about their costumed counterparts. Looking at the short list for today only serves to reinforce my point. Let’s take a look at the list and see. 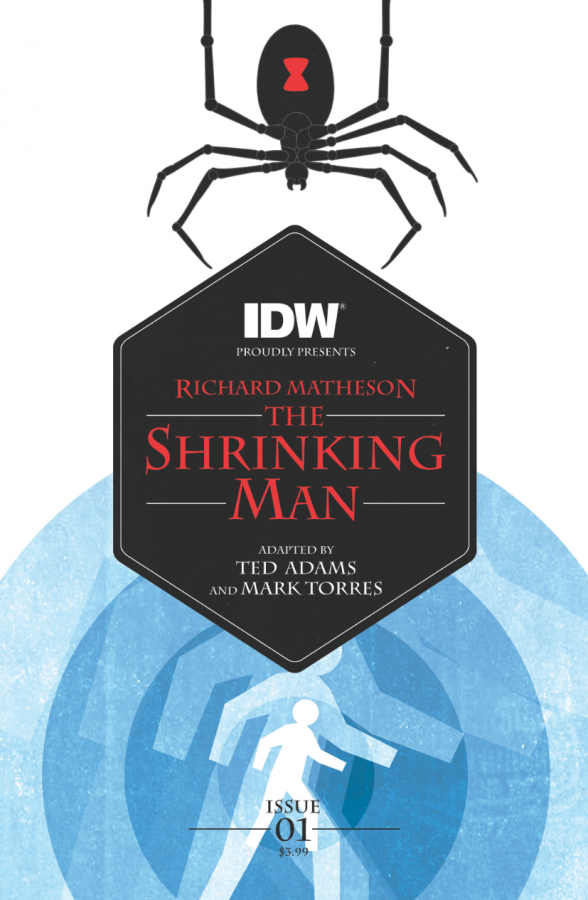 IDW continues its tradition of re-visiting classic storylines by adapting Richard Matheson’s novel into comic form. I’m not crazy about the art, but I am in awe of the ambition and vision to find these classic tales and introducing them to a contemporary audience. Not only does Ted Adams deliver the original flavor of the 1950’s text and creates a sci-fi story set in time that relies more on the effect than the explanation. I love how Adams explains his process for adapting the story at the end and provides us with a real sense of the creative effort that goes into adapting the story for comic format.

The real goal of this book is to encourage people to go out and find the novel. It’s a very altruistic purpose behind a publishing initiative and admirable. It’s a real testament to Matheson’s work but it’s also a gutsy sales decision. The appeal of the novel might be lost on a younger audience despite how great a writer Matheson was, but it’s definitely a labour of love that demands respect. 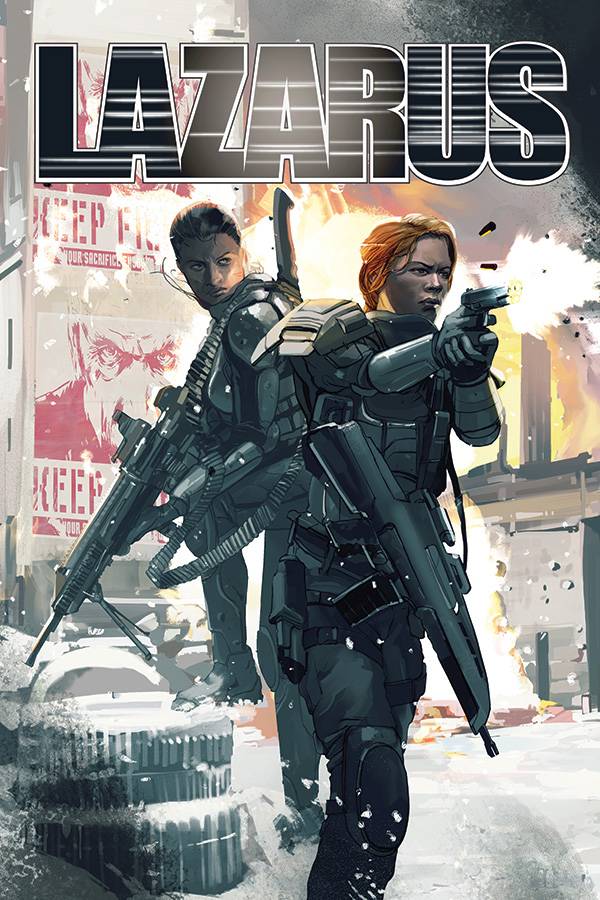 There’s not very much I can say about this book that I already have. It’s simply an amazing piece of comic art. The characters, the dynamic art – it’s all incredible and I am never disappointed with an issue. Lark and Rucka have now taken a hallowed place in my personal pantheon of creator teams like Byrne and Claremont or Wolfman and Perez.

But the ending of this issue blew me away.

If you aren’t reading and loving Lazarus, we can’t be friends. I honestly have nothing for you. However, you can still remedy this condition by picking up the hardcover compilation to catch up on the issues.

There are three battles in this issue: Forever and her team’s incursion into Hock territory; the political efforts of her brother to hold the Carlyle Family’s political alliances together and the attempt to save Malcolm Carlyle’s life from Jakob Hock’s poison attempt. We see relationship forming between Forever and Corporal Casey Solomon, James Mann rising from the waste level to potentially save Malcolm’s life – there’s so much going on in this comic that you don’t see the ending until the last minute. It’s an amazing book. 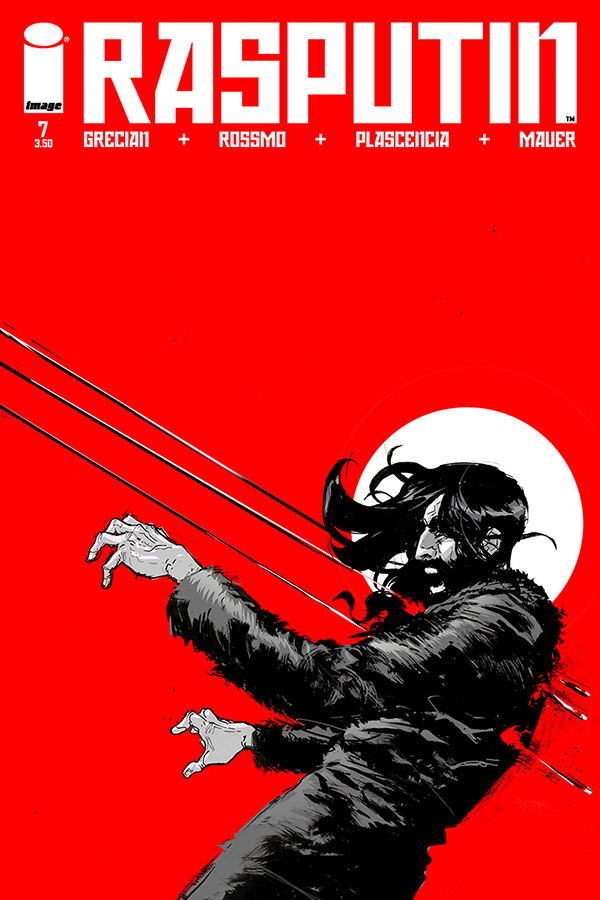 Well, I said I’d stick with it and I did.

The back story for this book comes out in drips and drops. I think that’s my frustration with it – it’s never complete and while I can see that compelling the reader to come back for more, it’s a little frustrating. It would be more enjoyable to have shorter story arcs that detail more about the Mad Monk and his abilities and less on the shadowy allusions to his life.

Hover, I think I’m finished with it at this point. I have too many comics to read and not enough time to devote to this saga. 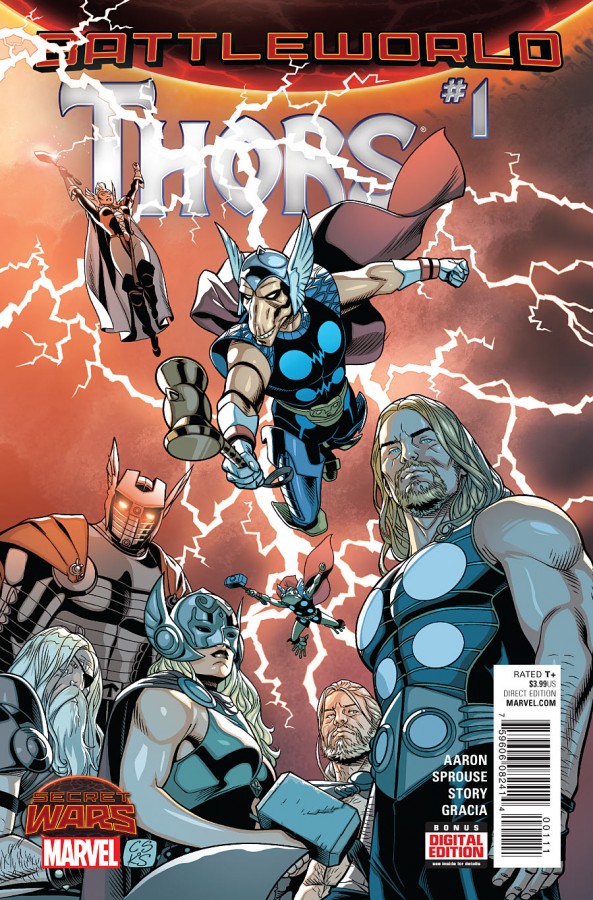 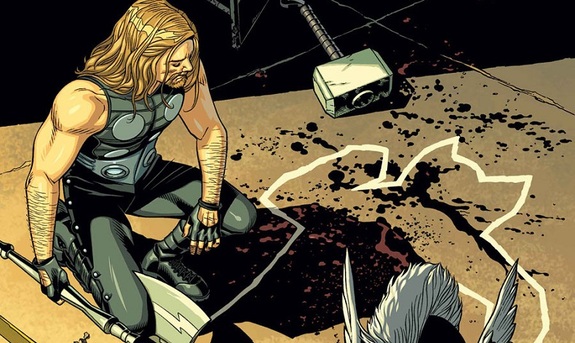 These are recommendations from my good friend, Kevin at The Comic Lounge and Gallery. Kevin’s got great taste and the guy knows his books. In fact, Kev heads up the Joe Shuster Awards in Toronto so when he gives me a recommendation, I tend to listen. Here’s a shameless plug for Kevin’s comic service. If you’re in Toronto, get him to add you to his service – you won’t regret it, trust me. You can contact him at info@comicbooklounge.com.

So, to the comics, I have to agree with my friend, Kevin. This was a pretty good cop/superhero mash-up and it was pretty cool to see the various incarnations of Thor depicted in various ways. Oh, if you don’t know the concept behind this, in Battleworld, Doom has relegated all the different Thors to serve as a battalion of peace-keepers – essentially a police force that has the authority to move amongst the different realms.

In this cop drama, we see Thors don rubber gloves, make forensic identifications and even get chewed out by their superior officer (Odin – aka the Lawspeaker). It’s surprisingly entertaining and well-crafted. But that’ not surprising, given the talent – Jason Aaron take the writing role, one of my favourite writers, this is a guy who knows the darker side of humanity. But Chris Sprouse – one of my favourite artists has the penciling duties and his work is always a joy to behold. So thanks Kevin! Great recommendation and these will be added to my pull lists in the future, that’s for sure. 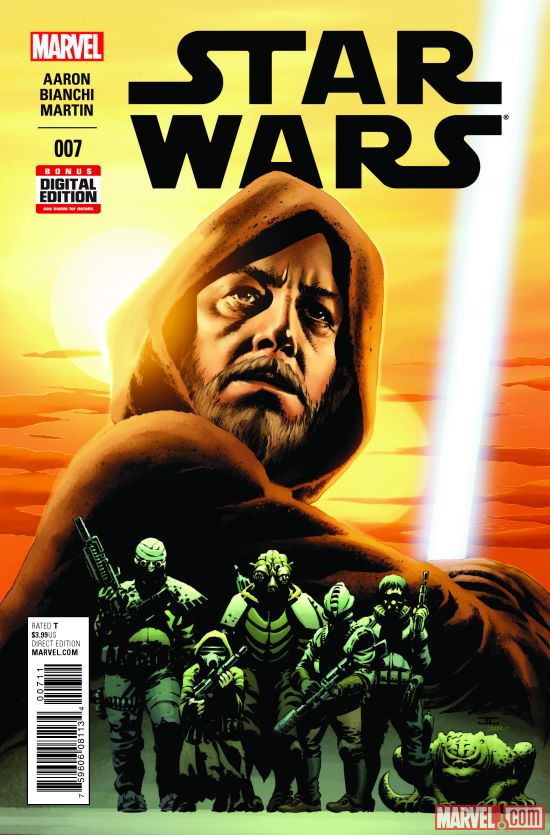 A one-shot story – sometimes those are the best. Look at Michael Golden’s issue in the original Marvel run of Star Wars back in the 80’s (#38). That single issue still gives me great joy whenever I reread it.

Jason Aaron pulls double writing duty this month on this book while Simone Bianchi picks up the pencils. It’s a tale of Obi Wan’s activities in Tatooine, keeping young Luke and his family safe from the shadows. It’s a much-needed tale and one that definitely fits into the Star Wars canon.

But just a great story and another reason why the Star Wars titles are doing so well for Marvel. If you put your A-Talent on a dynamic property, you are guaranteed to get successful results. I hope they do another story from Kenobi’s journal. This was pure gold.

Trust me … the ending on this one really took me by surprise. When a comic can do that, there’s some really great writing going on. This is unabashedly my favourite comic.

So that’s it for this week. As I said, few super hero books, but that’s not what’s making comics sell these days. In fact, all that was accomplished by Marvel and DC’s mega-events was that it made comic readers search for alternate titles. Image and the other publishing houses are cleaning up in all this. After all, books like East of West, Sex Criminals, Saga, Nameless are all picking up a lot of attention. Super heroes – unless they have a real human side to them like Kurt Busiek’s Astro City or Marvel’s Moon Knight they aren’t going to succeed. We live in an age when the heroes have to be human rather than rise above humanity. But if you think of it, wasn’t that human relatability part of Spider-Man’s appeal? Sure he had super-powers, but his core was poor, struggling Peter Parker, trying to keep his life together while trying to reach a higher goal.

That’s what all of us are about. We try, we aspire to greatness but we have life problems and challenges in maintaining the basics that get in the way: family, career, rent, health and all the other aspects of mundanity. We take these for granted. While paying the bills may prevent us from investing in our dreams, it’s the fact that we are able to pay these bills that, at least, allow us the privilege of dreaming.

Dreams can be achieved but through dedication and hard work. They’ll happen, but first, you need to eat. While you’re eating, why not read a few comics?