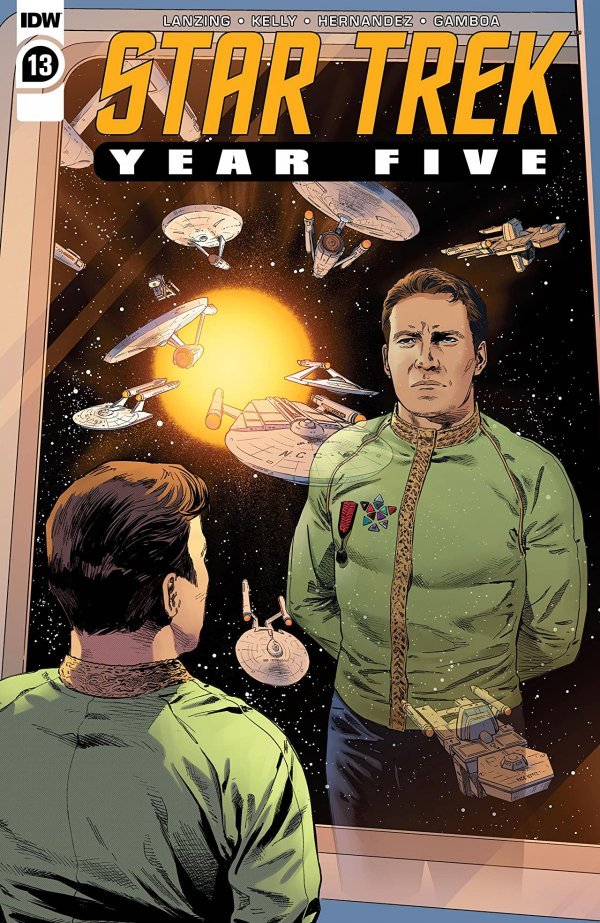 Good heroes aren’t expressions of characters’ own wants or desires. Anyone who seeks glory of self-adulation isn’t a hero – they’re self-aggrandizing narcissists. That’s not good character-creation because, in the end, that type of character is self-defeating.

Heroes can have egos, but in the end, they do what’s necessary for the benefit of others and don’t expect a reward.

Which is what we see in my favourite hero of all time in Star Trek: Year Five #13 (Jackson Lanzing, Collin Kelly, Angel Hernandez and Fran Gamboa), Captain James T. Kirk.

To begin – full disclosure: you must realize that someone, namely me, whose nickname is “Captain Kirk”, titles his comic review column, “Captain Kirk’s Weekly Comic Review” and sports a social media avatar of himself painted on to the bridge of the USS Enterprise with a disgruntled Spock and a mildly irritated Kirk looking on, has got to have a bit of bias here. With that said, I suppose I need to not only justify my choice of this book being the pick of the week, but also justify how this choice fits into the theme of the week I’ve identified above.

The story so far: Kirk and the crew of the Enterprise have defeated Agent Gary Seven and his partner Isis, preventing them from destroying the ship and killing Kirk. The Enterprise makes its way back to Federation Space to near to the end of its five-year mission to receive a hero’s welcome. During this lull time, Kirk reflects on his time in space and if he made the correct decisions. He is reunited with an old friend and also learns of a new movement threatening the Federation’s ideals – ideals that he has been defending on his five-year mission. However, the reception is brought to an abrupt end as a new type of Klingon warship appears, demanding the surrender of James Kirk for his crimes against the Klingon Empire or else the ship will detonate a highly radioactive and destructive device, threatening the starbase and other starships in the area.

First off: it’s a bit of a stretch that one Klingon ship, regardless of how advanced it is can threaten an entire starbase and squadron of heavily armed Federation ships. However, I’ll surrender disbelief and go along with it. Why? Because, this is high drama that illustrates the worth of the characters and values that we love in this series.

There’s a great line in this book. Kirk responds to the threat to the Federation he knows by saying: “I’ve seen what happens when democracies fall to demagogues. I won’t let that happen here. We’re explorers. We belong beyond the horizon.”

Is there anything more Kirk than that?

Lanzing and Kelly have the character of Kirk down pat. They understand his motivations. Kirk begins this story thinking about the cost to his own life by choosing a mission like this. No family, no real ties to his family and a stark devotion to Starfleet and the Federation and their principles has to be worth that sacrifice. Their presentation of this character hearkens back to when you hear Kirk espouse this devotion in the original series episodes. That’s what motivates this hero. He simply does the job because it needs to be done, but it also is worth the sacrifice the hero has made on its behalf.

Of course, the only choice of action that we can expect a hero of this calibre to take is to sacrifice himself on behalf of his fellow Starfleet officers. Of course, what I like about this decision is that it isn’t one that’s based on glory-seeking or attention-seeking; it isn’t done impulsively but is rather based on Kirk’s experience with Klingons during his time out there. Lanzing and Kelly are tapping into something that will become an issue that Kirk will struggle with for his entire career after this point: his hatred of Klingons. As we know in Star Trek III: The Search for Spock, that hatred reaches its zenith, but you can begin to see the foundations for that hatred being built in this book. Every hero needs a flaw, and this is definitely one of them.

There are other hallmarks of Kirk’s heroism in this story; minor ones, to be sure, but they all work in tandem to emphasize his nature. The fact that he is dressed in his formal uniform for the return adds to a level of decorum. His demeanour with his fellow Starfleet officers and steadfastness in not recusing himself from the situation when he hears his name mentioned by the enemy, like some sort of clarion call to battle. Even the way he carries himself with his Klingon antagonist gives him an aura that brings back memories of the TOS Kirk who was, for the Star Trek audience of that time, the definition of a hero.

Angel Hernandez’s art really shines in this book. A lot of the scenes are fairly expansive – lots of close-up panels, single page spreads and an emphasis on staging and posing of the characters for full dramatic effect. I also love the way that the TOS and TMP uniforms and technology are intermixed, creating a transitional effect that would be certainly accepted by Trek fans of all generations. There’s even an NX-01 Enterprise in the throng of starships welcoming the Enterprise home.

I’ve long followed Hernandez’s Star Trek art and I have to say that I think this is his best work. It’s prolific, exact and just what is needed to match the high drama that Lanzing and Kelly have fostered in this story. The colouring is vibrant and precise and Fran Gamoa definitely needs to be included into the credit for creating such a stunning piece of visual art.

Not to be outdone, McCoy and Spock see some action in a sub-plot in this story that is pretty nefarious in nature and adds to the heroic drama and underlies the reflective questions that Kirk is asking at the beginning of the story: are the ideals that I have spent my life defending actually worth it? There’s a connection between the two plots that support Kirk’s heroic nature and it makes for a great piece of storytelling.

Our heroes are simply doing their jobs, not looking for adoration or any sort of a reward. They hold to a higher purpose and simple, honest values. Kirk, Spock and McCoy hold to their values in this book at the expense of their own well-being and that’s the meaning of heroism for me.

Star Trek: Year Five #13 is the pick of the week for this week! If it’s heroism that you’re in need of, then this is definitely the story for you.