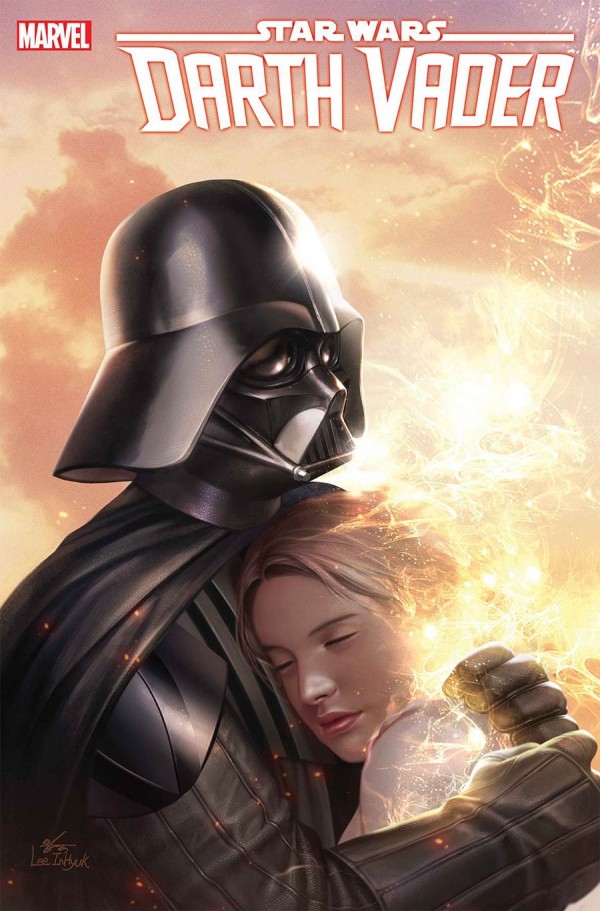 Tragic characters are the ones we feel for the most. The definition of a tragedy is something that could have been avoided, but the tragic character is a noble one possessed of many virtues, yet has a single flaw that will prove his undoing.

Looking over the character choices in comic offerings for this week, I have to go with Anakin Skywalker in Star Wars: Darth Vader #4 (Greg Pak, Raffaele Ienco, Neeraj Menon, Joe Caramagna) as that example to focus on.

The story so far: Vader is on a quest for revenge. After revealing to Luke Skywalker that he is his father, Vader is enraged by Luke’s rejection. Enraged, Vader is hunting down everyone who hid Luke from him. Accompanied by an Imperial Forensics Droid and a squadron of Death Troopers, Vader finds himself in an alliance with one of Padme Amidala’s former handmaidens, Sabe, who believes Vader to be the killer of her former queen. Setting a trap for Vader, she now springs it.

First of all, I’m entertained by the structure of this story. We’ve always assumed that once Anakin Skywalker took on the mantle of Darth Vader that there was no looking back for this former hero of the Republic. It was a one-way street that he could never travel backwards. However, that doesn’t mean that he wasn’t tortured by regrets.

Greg Pak explores this aspect of Vader’s character in a painfully, poignant way. Encounters with former allies turn into hurtful memories. He pauses when he meets them and a quick recollection of who they were, how they were meaningful in his life and how they mattered in his relationship with Padme. The reader isn’t just witnessing these memories, but is also experiencing them in the mini-backstory Pak has crafted for them.

While this is a story about reflection, there’s also a great deal of action that reminds us not of Vader now, but who Skywalker once was. Pak is gifted in telling stories that cement the distance between the Prequels, the Clone Wars and what should be considered new canon.

There’s a lot of conflicting emotions going through Vader’s head in this story; regret definitely is at the forefront of them all and it plays havoc with his fighting prowess as he encounters the defenders of Padme Amidala’s memory. However, during these moments, Pak skillfully shows the resurgence of Vader’s persona over the man that Anakin once was. It’s subtle, but its effect adds a delicious flavour to the consistency of this tale.

Raffaele Ienco’s art is also tinged with this sadness. Along with the hesitancy in the dialogue, Ienco adds posturing and angles to Vader’s face mask that conveys the emotional torture that Vader is experiencing. It’s story-supportive art and definitely adds to the moments when Vader meets and recollects those from his and Padme’s past. When they also lovingly mention Anakin Skywalker, you know it is an extra dagger through his heart.

It’s a penetrating examination of Vader’s character that demands to be recognized. It doesn’t just show Pak’s familiarity with the Star Wars canon and characters but also with characterization. A gifted storyteller, Pak understands the humanity behind Skywalker’s descent into Vader and the cost of that decision to his soul. Anakin is a tragically flawed character who was brave, skilled in battle and in the Force, but ultimately was caught up in his own hubris, allowing that pride to be the seductive vehicle that took him to the Dark Side.

Star Wars: Darth Vader #4 is the pick of the week for this week’s run. It’s a must read for any lover of this franchise and, if you are a fan of Vader, an excellent interpretation of the greatest cinematic villain of the 20th century and to date.

Until next week, may all your own regrets be few and fleeting.

Pick of the Week: Darth Vader #4