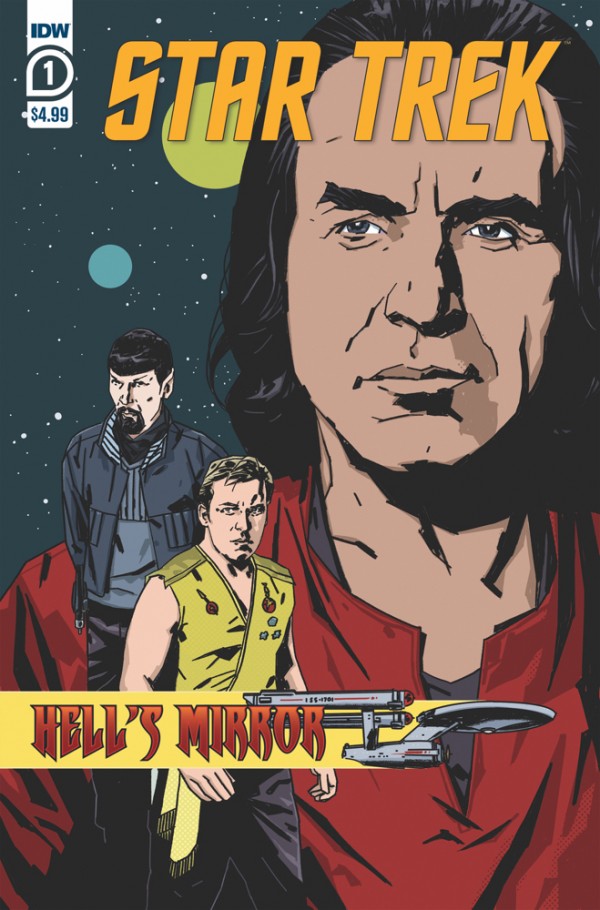 If there’s anything I appreciate, it’s a pure, pleasant surprise.

I mean, I don’t spend all my time looking at the comic solicits. Every now and then, one slips past my radar. I experience a momentary disappointment in myself when that happens, but if it does, and the comic is a pure delight to behold, then I forgive myself for my lapse in attention … but love the comic for the joy it has given me.

I think the surprise was overwhelming for me. It’s enough that it’s a Star Trek story that I wasn’t aware of, but it’s about my all-time favourite villain, Khan Noonian Singh. The additional layer of enjoyment was that it was Khan in the Mirror Universe! 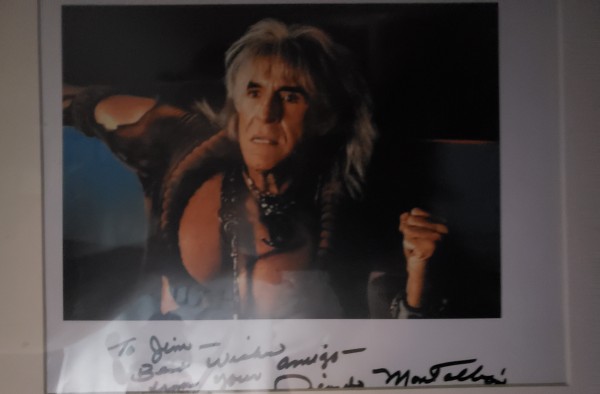 (Forgive the glass reflection of this office picture and stop me if I get too exuberant.)

But then, IDW has to ramp up the unmitigated sense of excitement to level 11 (because 11 is more than 10, right?) with the writer being the legendary J.M. DeMatteis himself! What this guy has done for character-driven stories in the history of comic-writing is present an example for so many aspiring writers to follow. To see him tackle a Star Trek story like this was definitely something that I could not resist writing about. After all, he was one of the final authors of Marvel’s run on Star Trek in 1997. This had to be like coming home, in a sense. This guy knows about writing for comics – more than I could fill in a simple review. It’s an honour and a pleasure to review this acclaimed writer’s work in a franchise that I revere. 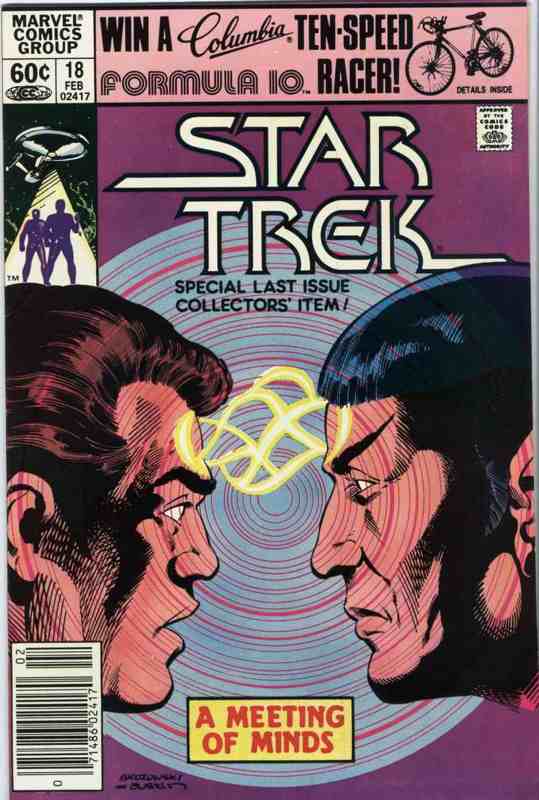 Look, I know comics and I know Star Trek. When you combine the two together, I’m in pleasure overload alone. But to see a comic in a franchise that I love, written by a legendary writer who I wasn’t expecting … okay. You get the point. I’ll start talking about the comic.

First of all, if you’re a fan of both the “Mirror Universe” and Khan, then this is a question that must have been on your minds as Star Trek fans: what would that Khan have been like? The answer? Completely egomaniacal, totalitarian but the type of benevolent dictator that could have made a positive change in the universe. In the same vein that Louis IV of France or Peter the Great of Russia – there were dictators who made great advances for their nations because they had both the will and the intellect to literally power their nations to great prosperity and advances.

One of my specialities in teaching is history, and this concept has always fascinated me. In the regular Star Trek universe, Khan is definitely NOT one of those rulers. However, J.M. DeMatteis plays with that concept and presents to us the idea of a Khan who could be. Given that the universe that Khan is in is populated by a villainous version of the Federation that resists the open ideals of exploration, peaceful coexistence and a greater understanding of the universe, in favour of conquest, subjugation and increased power for the Terran Empire, is it any surprise that, as an enlightened being, he would resist the latter for the former?

DeMatteis knows the characters. That’s what I like about this story. Khan’s motivations may change by being in this universe, but he doesn’t. Still prideful, overconfident and convinced that his own superiority will win the day, he pursues his ambitions with a sense that he is undefeatable.

But … there is James Kirk.

Even in this universe, Kirk did not rise to the position of commanding the ISS Enterprise or being the most decorated Starfleet officer if he didn’t have the force of character and ability to match Khan. Even in this universe, Kirk proves to be Khan’s nemesis – which is completely in line with both the canon of Trek but within the unwritten rules to play “what if”? Not only is that a homage to the original Star Trek, but it’s also a very creative and acceptable way to create new and unexpected stories. In my mind, it’s a complete winner.

I need to talk about the art.

I honestly do not know a lot of Matthew Dow Smith’s work. I can’t comment from a position of past experience, but what can I write about is what I see in this story.

Smith has a talent in lending to the flow of the story. For example, he takes time to show the wakening of Khan that not only helps to convey over 200 hundred years of suspended isolation of space travel in Khan’s face, but also the sense of memory behind that long sleep. It has to be worth something and in three frames of eye-opening, the reader can appreciate that sense.

Later, we are treated to other wonderful parallels. If you look closely at the corners of the panels, you’ll see familiar Star Trek TOS characters. They aren’t fully depicted, but if you’re a loyal TOS fan, then you’ll recognize them and love the effort that went into illustrating them. There’s definitely an appreciation for the accuracy of the costuming, the characters and the colouration.

I have to commend Candice Han’s colouration work. Not only does she have the feel of the 23rd century technology and costuming, but even Spock’s green skin tinge is noticed. In short, the collaborative efforts of all the professionals on this book is definitely of worth. Neil Uyetake has a lot of experience in lettering Star Trek books, so even he has an idea of how the text should look.

Chase Marotz and Denton Tipton: editors supreme: yeah, they know their stuff. God, I’d love to be a fly on their office walls to see the stuff that comes across their screens.

But it comes back to the characters, for me. DeMatteis is spot-on when it comes to presenting a story of characters that we, as die-hard Star Trek fans can appreciate in the mirror universe. Khan is egotistical, but well-meaning, in this universe. But that’s what the Mirror Universe is about: it’s a sandbox for “what-if” stories that are in tune with the original foundations of Star Trek that fans can appreciate and relate to.

This time around, Star Trek: Hell’s Mirror is the pick of the week for me.

My question is: why hasn’t DeMatteis done any more?

Well, I guess that’s what makes it a surprise. But, to be frank, I think this is a time when we can appreciate more surprises.

Hey, IDW! What about a team-up of John Byrne and J.M. DeMatteis?

See you next week!