I think the key to a successful series is intrigue. While a cliffhanger is a cheap way to simulate the genuine desire to follow a story through, it’s an easy write. It’s quick and it’s over fairly quickly. A real intrigue has mood and a slow burn, but not too slow so that you’re bored in the middle of the story. A real intrigue makes you forget the time you’ve spent reading.

Ah, but look at me going on. You probably just want to know what’s on my list for this week. So, let’s get to it. 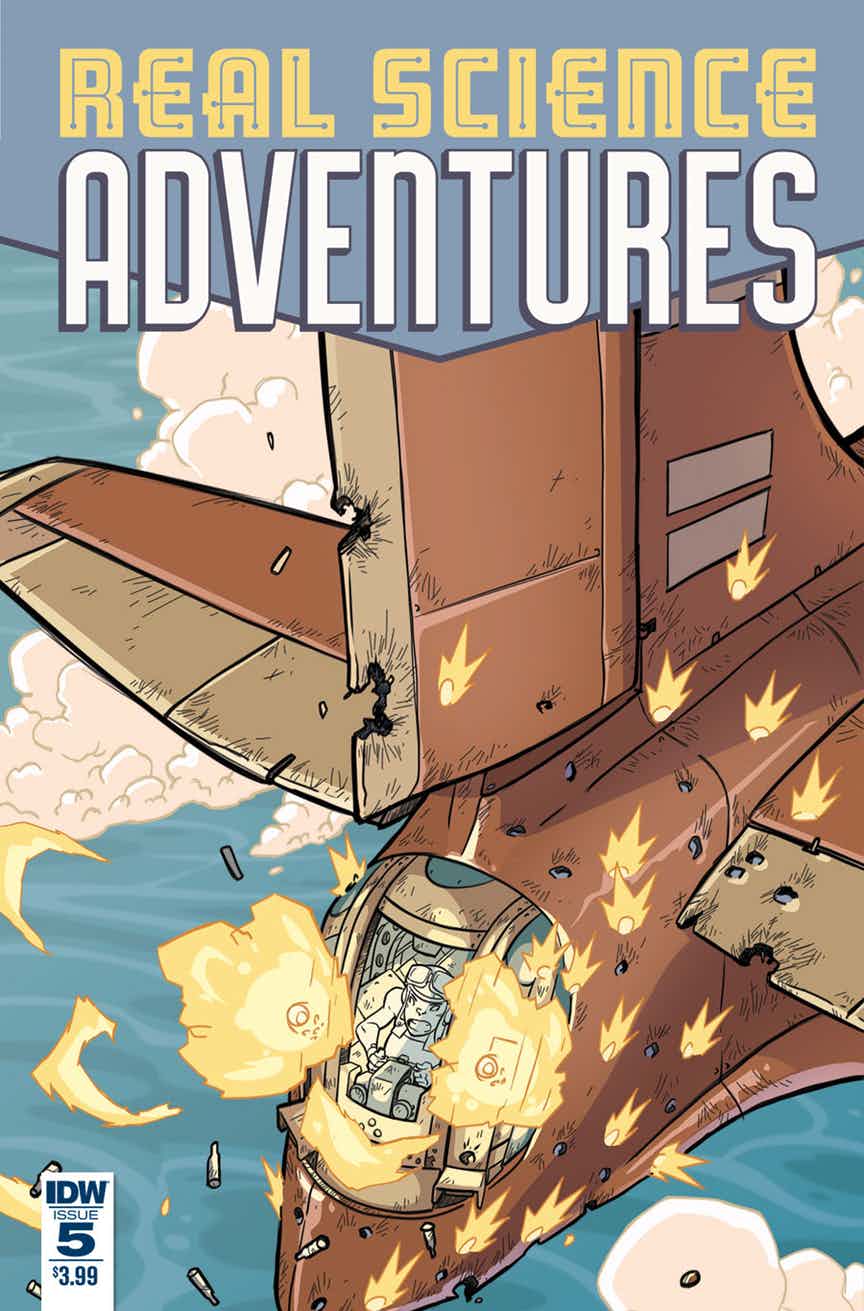 This an exercise in pulp storytelling, with a little bit of a modern twist.

First of all, there’s the World War Two era fighter aircraft vibe in the first story that features air-pirates and roving mercenary bands. The twist is that one of the mercenary bands is a female-exclusive group known as the Flying She-Devils. While not wholly traditional pulp, where we would see male adventurers in the heroic roles, I have to say that I loved the idea of a bunch of women flyers roving the skies, filled with hellfire and spit. Of course, we have to remember that women are actually better combat pilots, and if you don’t believe me, look at the Russian female squadrons in World War Two and their kill ratios. Better reflexes but were given completely inferior machines to fly and they still racked up an impressive kill score. Written by Brian Clevinger, this story reminds me of that.

However, I wasn’t too keen on the art by Lo Baker. It was a little too cartoony for my tastes and while it would do well with a younger audience, the script seemed mismatched with the art. I think I would have preferred to see something a little more mature to more accurately pair up with the action and subject material.

I think the same can be said for the second story in this book, titled The Sparrow, Projekt Millipede and centres on the idea of a young female intelligence operative behind enemy lines in World War Two Germany. Also written by Clevinger, the art (by Wook Jin Clark) also seems too juvenile for the subject matter. 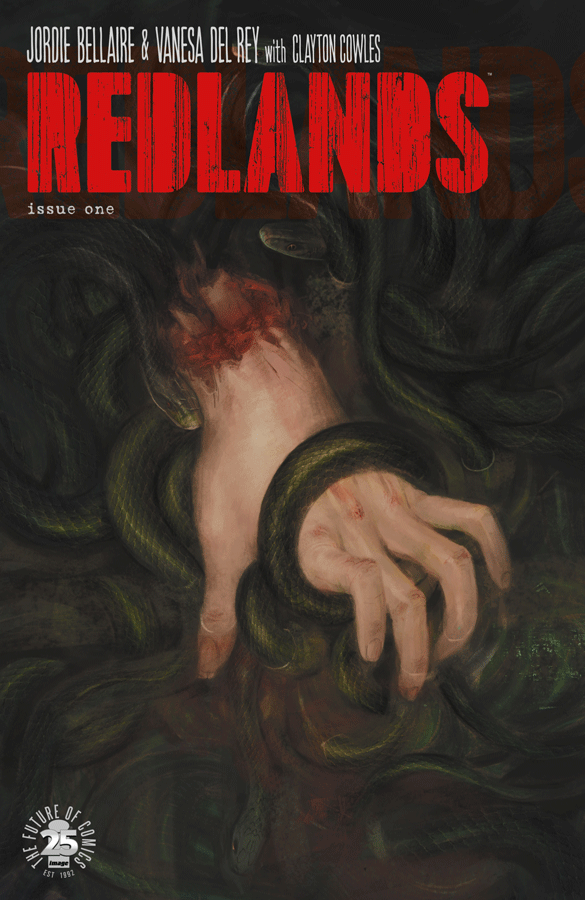 Written by Jordie Bellaire and drawn by Vanesa Del Rey with Clayton Cowles, this book excited IDW editor Sarah Gaydos so much that she actually tweeted a picture of her with the book clenched between her teeth, claiming it is so good!

While I can’t vouch for the nutritional content of the book, I can most assuredly attest to the fact that it is a meaty occult thriller with lots of intrigue to throw around. While I am not crazy about the art, I am really fond of the idea that witches can take a heroic aspect to themselves and face down corruption and see it punished.

Of course, the question is: why? Perhaps these witches aren’t the best thing to happen to Redlands, but it’s going to be very interesting to learn more.

And in further interest, it is of note that this first issue has already been rushed back to reprint status. So the numbers are good for this book so far and that’s definitely very encouraging. 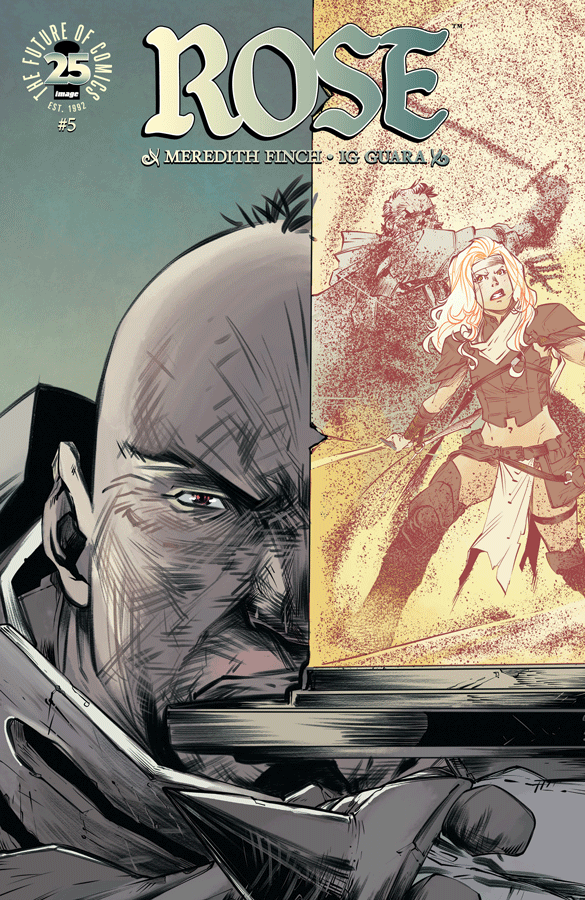 I look forward to this book every month. I am a fantasy novel nut and I really get into underdog heroes, especially in a classic fantasy setting.

The highlight for this issue is the union of Khat and Guardian. Though there is an upcoming battle royale to look forward to as well, it’s clear that the fantasy vibe runs strong in this book. Meredith Finch and Ig Guara are clearly enjoying themselves with this story. I also love the fact that the alternate cover to the comic was drawn by legendary master, George Perez. 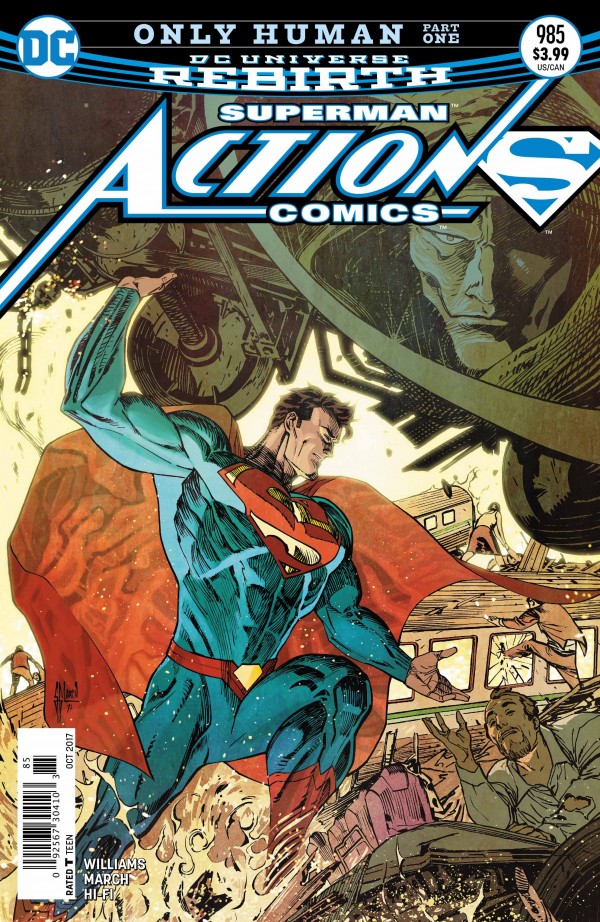 Rob Williams and Guillem March give us a solid story here. There’s good action in Part One of “Only Human” and it heightens the newly-formed but strained relationship between Superman and Lex Luthor as they team up to defeat the machinations of … The Machinist.

I enjoy Superman’s new family vibe. Taking phone calls during rescues or villain encounters is probably not good superhero form, but when you can effectively lift mountains, I suppose you get to make your own rules. Still, it’s good to see that the Lex Luthor/Superman enmity still has some remaining vestiges in this kinder, gentler Superman era.

Guillem March’s work is fairly new to me. There’s something about it that reminds me of Carmine Infantino but more defined and sharp. It’s definitely enjoyable and fun. 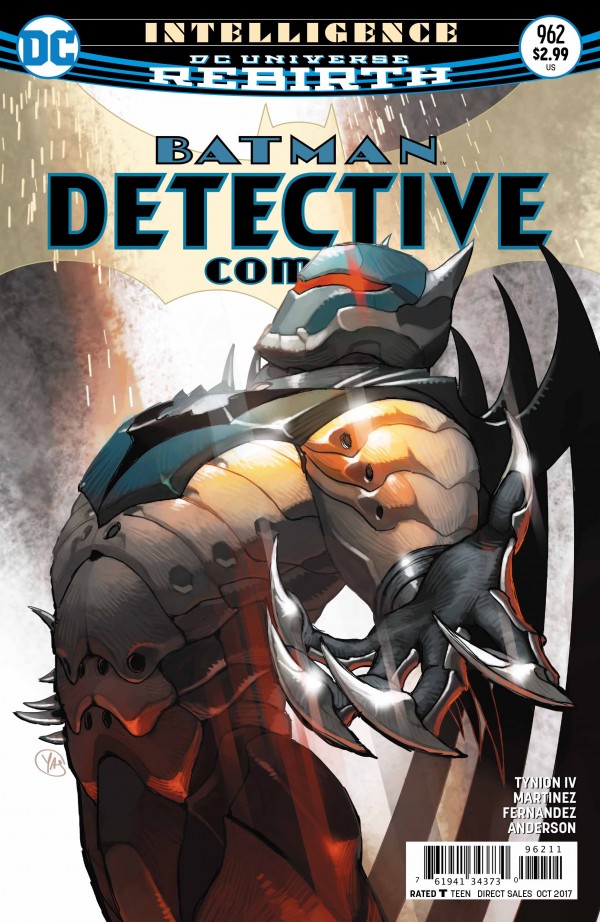 The end of the story arc “Intelligence”. While certainly highly-charged and elaborate storytelling from James Tynion IV, it’s also an emotional one. There’s everything in this one as Azrael confronts his past demons and meets his brother in combat while the rest of the Batman Family watches on. Yet, for the life of me, I have to say that there weren’t too many surprises in this for me.

… Save for a very important piece of information that is revealed to Batman; one that he desperately needed to hear and wrap up a dangling storyline from other Batman issues past. I’ll leave it for you to discover but that, and the appearance of Zatanna (always a favourite character of mine) were the major takeaways for me in this issue.

Of course, I’m a new fan of Alvaro Martinez and his work is absolutely stunning. 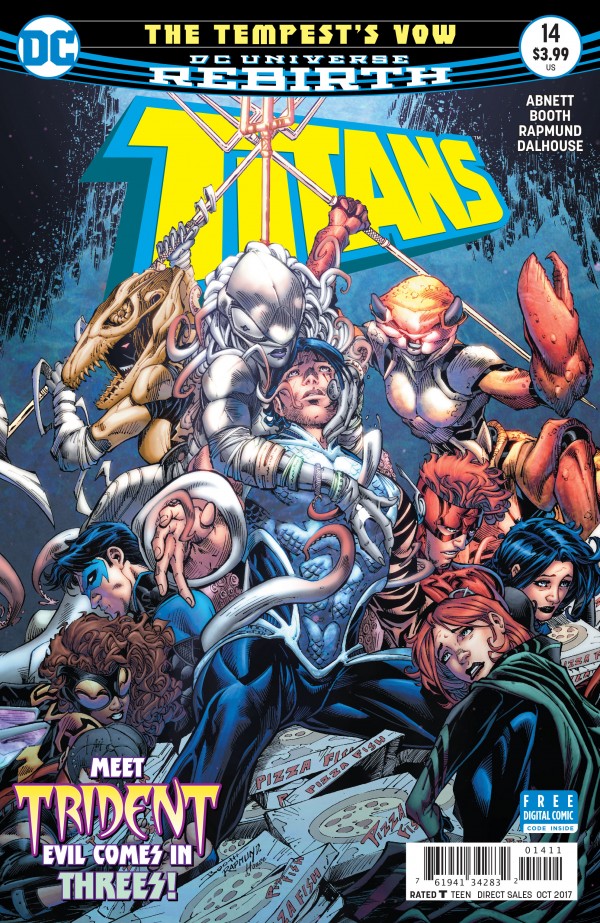 Dan Abnett has always been one of my favourite writers. I love that he can insert mystery and a note of – dare I say it … intrigue into the most benign subjects. However, this was written in a way that was completely obvious and open. But, that’s the psyche of young people, isn’t it? At their most basic, teen-agers are essentially id-driven creatures who are learning the art of subtlety. Even Dick Grayson, with a lifetime of being shrouded in detective work and mystery, can’t help but respond emotionally in certain situations. There was a lot of juvenile behaviour, despite these characters’ super-powers and sense of heroic duty. So, basically, Abnett nailed it.

Brett Booth’s work really shines as he presents the Trident Three sisters in glorious form. It’s a real treat in artwork to see the characters I knew from the eighties take new shape in a way that I think even George Perez would approve of. 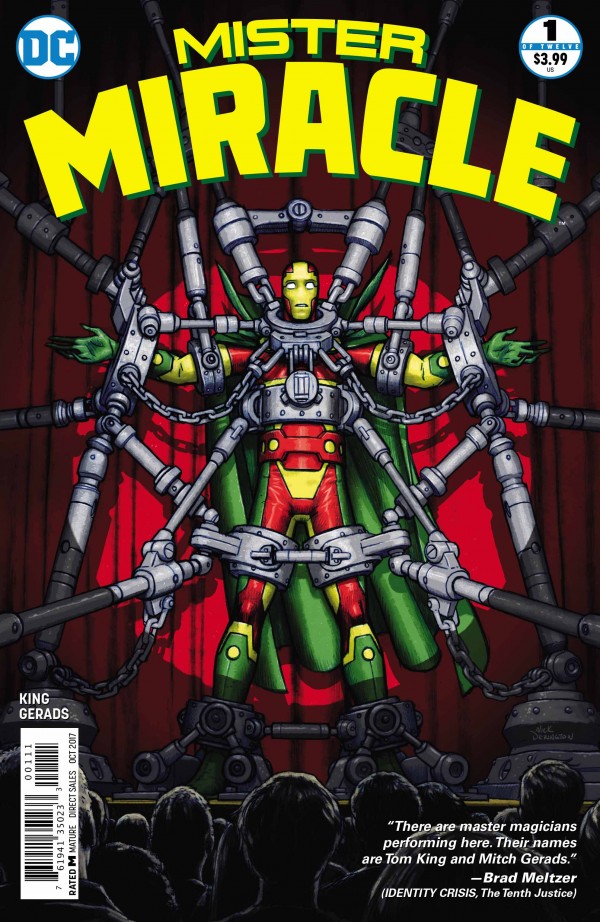 Now … you want to talk intrigue? This is the comic that a lot of folks have been looking forward to and Tom King really has his finger on the pulse of two of my most favourite comic characters of all time. Mister Miracle and Big Barda are heroes with really tortured pasts and if they can see their way to go beyond their harsh childhoods and become heroes, then these are characters that not only have depth, but real significance in the DC Universe.

This story starts with questions though and in a way that only Tom King can deliver, we are forced to put those questions aside as he constantly presents us with new information throughout the story that distracts us away from the central storyline. Moreover, the constant reminders that “Darkseid is” also starve our perceptions of a comprehensive understanding of just what exactly is going on in this book?

But Darkseid has what he has always wanted. If you are familiar with the mythos of Apokolips and the New Gods, then you know what this might be. It’s also apparent that Scott Free seems to be in a universe of his own, King drops hints that something isn’t quite right and with this pertinent piece of information, the reader is set up for one hell of a ride.

Mitch Gerads provides the art for us in this book. Given that Mitch was an expectant father in the days he was working on this, his focus was not at a loss! Of course, we wish Mitch all the best in his parenting and hope that all goes well.

I have to say that I really enjoy Mitch’s work in expression. Scott Free moves from one emotional level to the next as he bounces form hospital room to home and on camera. But Gerads manages to capture it all. I especially loved the sequence when Orion shows up in Free’s living room to provide a lesson.

The combined work of these two creators makes this book the Pick of the Week. King knows how to keep the reader genuinely interested in learning more – not just about the story, but the character’s motivation, what he is feeling in that particular scene and combined with Gerad’s experise in mood setting with body language and facial expression, this book is thoroughly enigmatic.

It’s getting to be a repetitive habit for me to select King as he took the honours last week and I believe one of the previous weeks before that. He is clearly doing something right; whether his talent is that overwhelmingly obvious or he’s made a deal with the infernal one down below. In either case, Tom King is knocking it out of the park these days and DC must be very happy with his work, and I find that to be very … intriguing.

That’s it for this week. See you next Comic Wednesday!

Pick of the Week: Mister Miracle #1