DC Comics has definitely led the way with new offerings this summer. Rebirth has definitely made a huge impression in its continuity and certainly on me. I have to confess that, for the most part, I’m enjoying the new iteration of the DC mythos. My only problem is the lack of attention to the consistency of timing.

I know I’m showing my age when I complain about a great Batman story – that happens at the same time as another great Batman story. It’s a reactionary perspective – I get it, but is it one attributable to my age or does anyone else have this problem?

Back in the eighties, the Marvel Bullpen would have a section reserved for maintaining the continuity. For example, Spider-Man couldn’t show up as a guest-star in another comic because he was guest-starring in X-Men in a given month. It was also essential that in the same month, that the main Spider-Man title made mention of that incident. Everything was coordinated, tracked and it added a tremendous amount of authenticity as well as showed great care and love for the medium.

That’s my worry. Where’s the love? I love reading them and I’m sure creators love making them, but what about the publishing side? Is it simply a business model or do comic publishers have a real sense of affection for their medium? Sigh … 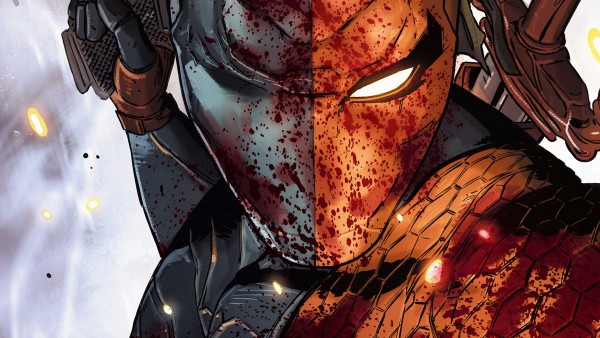 This is my first introduction to Priest’s writing and I have to say that I really enjoyed it. In recent the recent 52 interpretations and with television’s Arrow, I’ve seen some shoddy treatment of Marv Wolfman’s and George Perez’s Deathstroke the Terminator. The poor treatment comes from the fact that he was simply a mercenary and nothing more. However, Priest has given us a bit of insight into this character that goes a little bit deeper by focusing on his relationships with his friends and family. I have to say, it was a good representation and I’m looking forward to seeing what more can come out of this. 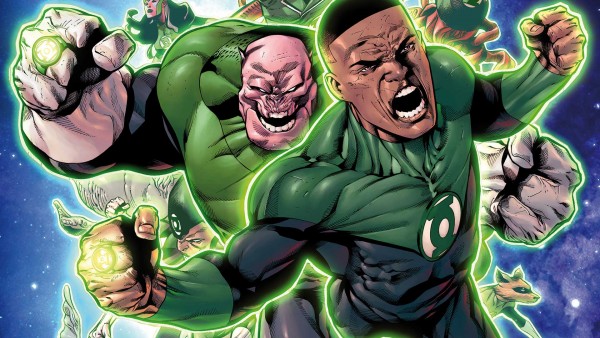 This story arc is titled Sinestro’s Law, written by Robert Venditti and pencilled by Rafa Sandoval. I have to be honest, I’m not overly familiar with the work of either of these folks. But, give DC credit for giving up and coming artists a chance for increased profile. It’s a good step in the right direction.

With Sinestro and his army in the dominant power position in the galaxy and the Green Lanterns Corps whittled down to a fraction of its former strength, it’s good to see them struggle a bit. I have always enjoyed the concept of an intergalactic police force protecting galaxy but had a problem trying to imagine their limitations. It’s a refreshing take on the Corps and I found that I enjoyed this issue. Of course, I’m also more partial to Hal Jordan. Leave Stewart or Gardiner to be Earth’s Green Lantern. Good book … pick it up. 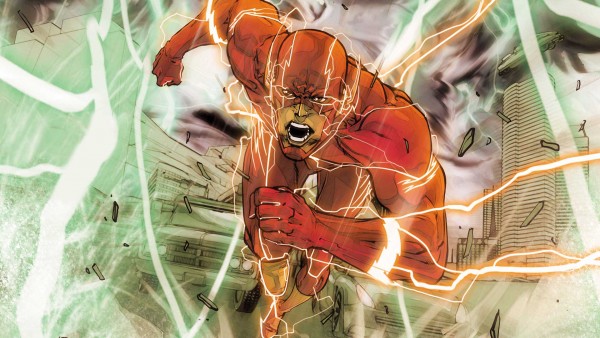 I really am not liking this new interpretation of the Flash. Apparently, it seems that now the Flash has his own corps of speedsters. Ever since people in Central City were struck by lightning and are all now manifesting their own connections to the Speed Force, Barry Allan has now become a mentor or coach for all of these neo-super heroes. My problem with this is that it diminishes the unique nature of the main character. If everyone has super speed then what makes Barry different? By sharing his power, Josh Williamson has diluted the value of this seminal DC character. I know I’m a reactionary traditionalist but don’t upset the apple cart too much or else you run the risk of losing the character’s identity. I think I’ll be dropping this one from my list. 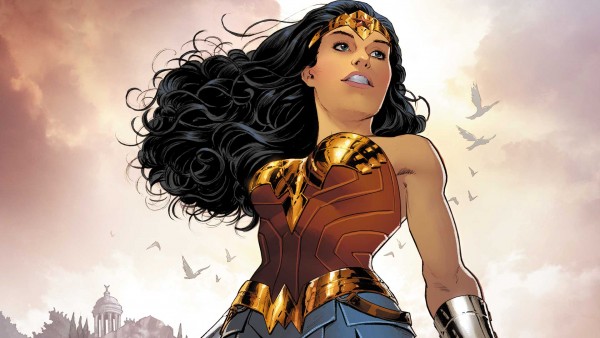 Oh my God … Greg Rucka and Nicola Scott have done the unexpected in rendering this character for reintroduction into the 21st century. This re-examination of the Wonder Woman origin story is classically shaped and inspirationally recreated. I have fallen in love with Diana of Themyscira once more. William Moulton Marston would be proud to see their treatment of his creation. With reverence and – dare I say it – wonder they have given us this naïve and noble hero once more.

It is perfect and I’ll leave it at that. 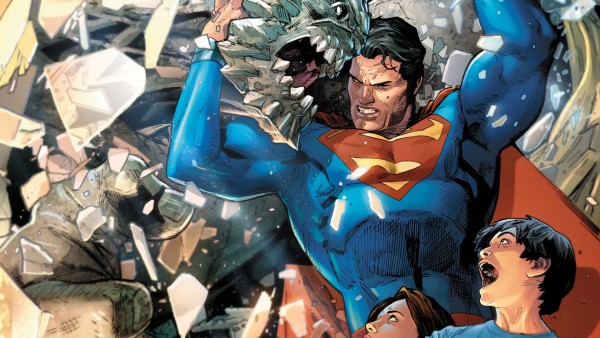 Dan Jurgens and Stephen Segovia give us this story of Superman and Wonder Woman going toe-to-toe with Doomsday. I have to say though, that after just reading Greg Rucka’s characterization of Wonder Woman, we see an avoidance of continuity that leaves me feeling a little cheated. The Wonder Woman in this story is less naïve, grimmer and seemingly more experienced with the world of Men than Rucka and Scott’s version.

I keep going back to the maintenance of a continuity but this is one of those times when it should really matter. The amazing work of Rucka and Scott gets devalued by Jurgens’ inclusion of her as a mere second banana to Superman’s battle with Doomsday. Also, with Lex Luthor in the armour of a Superman, a de-powered Clark Kent at his side and a Superwoman Lois Lane in the shadows – there’s way too much going on in this book for the main story to matter. I don’t know what’s going on with the Superman family (wow – that’s a term from the seventies I never thought I’d use again) but it just seems like too much work to figure out. 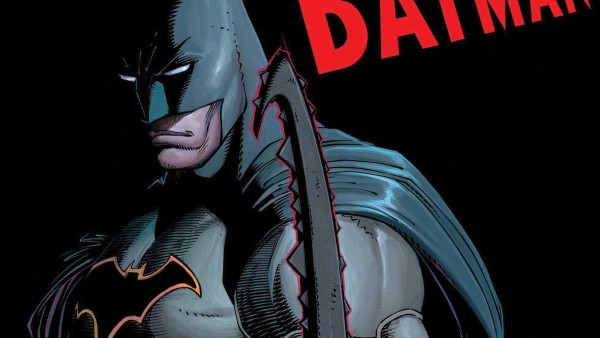 Wow … John Romita, Jr. That’s a mega attraction factor for this book. The first story in the book seems out of place from the rest of the Batman tales. I just don’t understand why continuity has to be thrown out?

It’s an otherworlds format, right? So I guess I can excuse the lack of continuity in this case. Snyder played around with the sequence of this story so it was a little convoluted to follow, but after reading it a couple of times (read it in print – trust me: don’t read digital. The sequencing is hard to follow on the computer screen. Maybe that’s just me getting older?), I found I actually liked the story concept. I didn’t buy the cliffhanger ending but I guess we’ll learn more next month.

Declan Shalvey’s art in Snyder’s second story was a little shaky. Perhaps it was transitioning from Romita’s art in the prior story. There was more of a focus on Duke in this one and I actually liked it. Very little revealed so this is a bit more of a mystery tale but we’ll have to see where it goes next issue to get a more solid sense of appreciation for it. 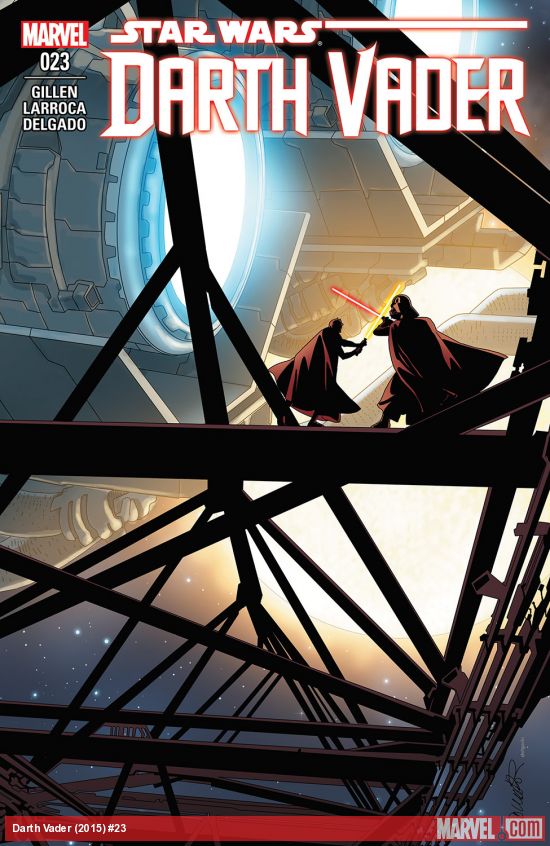 You know, my reading of Marvel books has gone down. I read the Star Wars titles and Moon Knight and that’s pretty much it. Whatever is going on in the Marvel Universe, I have to say, their public image is suffering with what must be their focus on their television and film properties. I’m just not into Marvel any more and as a Marvel guy from way back … that hurts to write.

Still, at least they’re doing something right with the Star Wars properties and this one is a real winner. Darth Vader vs. Morit on board the half-completed Executor star destroyer. If that doesn’t bleed Star Wars then I don’t know what does. I have to say that I find myself liking this Star Wars book better than the main one. Perhaps it’s our fascination with the majestic evil that is Vader or just that there is so much backstory about Vader the Sith Lord that we don’t know about – and I’m not talking about the mewling Anakin Skywalker.

Keiron Gillen has the character of Vader down pat. His dialogue is minimal; restricted to just a few words at the right time that can send shivers up your spine as you read them. He also has a good partnership with Salvador Larroca. Their pacing is excellent and it’s hard to know who actually is telling the story. It’s my favourite Marvel book aside from Moon Knight. 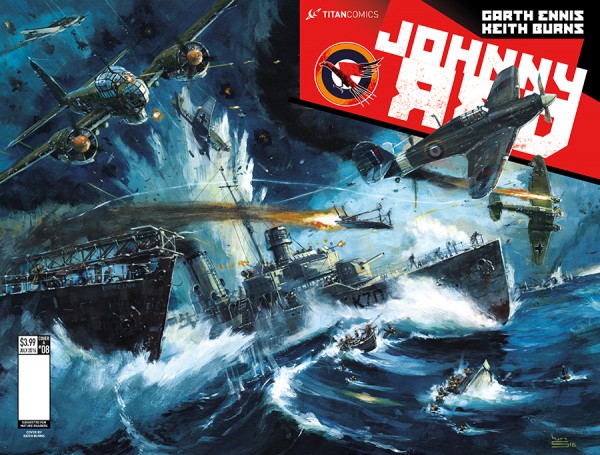 The only book I’m currently getting from Titan but I love it. My concern about this book is that there’s probably a small audience for it. At least in North America. I mean, with British ex-pats of my generation, it’s a given sale. But will new readers actually appreciate it?

Still, it doesn’t diminish the quality of the book. Garth Ennis and Keith Burns have given me a great deal of joy. I’m sure that they share this love as well. Not only does it capture that sense of historicity of World War Two, but it also captures the imagination and asks the question: could this have happened? Plus, with Ennis’s attention to World War Two detail and technical knowledge, it’s a great new read for military history buffs.

The Pick of the Week has got to go to Wonder Woman #4.

Nicola Scott’s art is smooth, reverential and pays a worthy homage to the noble, heroic and splendid warrior Amazon. Greg Rucka’s female characters are strong, yet not overbearing; willing to sacrifice but not blindly. They are heroic but but not exaggerated. In fact, this rebirth of Wonder Woman instills the reader with a great sense of inspiration. One cannot help but fall in love with this character because she represents a hero that you can believe in but also empathize with. I confess that I am smitten by this seventy-five year old character because of the renewal that Rucka and Scott have brought to her. She is truly perfect.

If comic publishers can bring that same love and reverence to their publishing models then perhaps even someone like me who pines for the glory days of comics can believe again?