We’re about two weeks away from what is arguably Canada’s biggest comic show: Fan Expo. Many of the artists and writers I’ll mention in past postings have been there. I usually hope to run into one or two, look at their work or show my appreciation. For example, Stuart Immonen, artist on Marvel’s Star Wars will be there. I’m hoping to get a commission.

The obvious point is, these shows are important to bring the artists and writers closer to the fans. They have rock star status for comic geeks like me but they’re different because most of them appreciate the reception. Walt and Louise Simonson are incredible people to meet and truly genuine in their words and actions (a side note, a bunch of my friends and me almost talked him into having dinner with us!); Ty Templeton is an incredibly entertaining speaker, and though I’m not a huge fan of his work 80s comic icon Bill Sienkiewicz is probably one of the most well-spoken gentlemen you’ll ever meet and I actually found myself enjoying the conversation I had with him.

I don’t go to the cons to buy stuff, I go for the experience of meeting these truly innovative and creative geniuses who manage to entertain millions by the sheer power of their imaginations and solitary talent. If you think about it, they don’t need million dollar studios, special effects or make-up teams; they simply tell a story through drawing or their writing and they have had immense influence on millions more created thousands of jobs in the entertainment industry or made iconic characters who have captured the attention of generations of fans. These are people I want to know and whose work I want to read.

Fan Expo is where I hope this will happen. 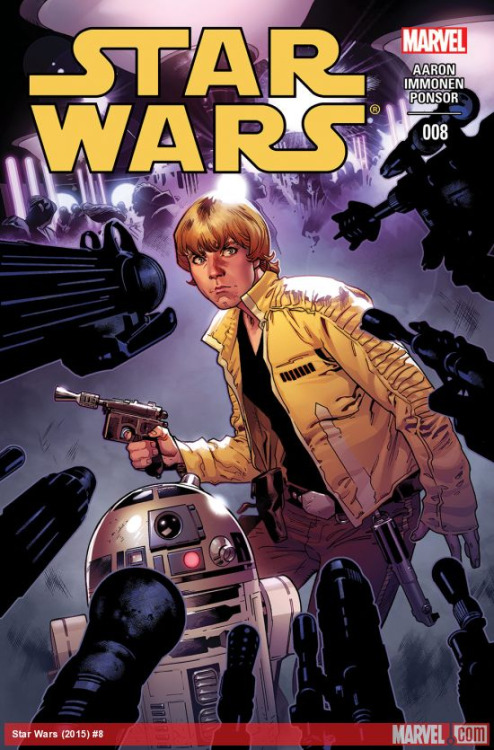 We might as well start with this one. After all, it’s at the top of my list to read! First off, there’s no way you can tell me that Stuart Immonen was not meant to draw Star Wars. He captures emotional expressions so perfectly that Han’s confused expression when confronted with Sana Solo – a bounty hunter claiming to be his wife – you can almost hear Harrison Ford’s contrived whining tone when trying to explain everything to Leia. This is a perfect cliffhanger episode divided in two. Not only do we have to wait with baited breath to find out what happens to Han and Leia, but we also need to exert some patience in waiting to find out what happens to poor Luke, trapped on the Smuggler’s Moon! Perfect issue and I’m already dying for the next one. I think I’ll shake Immonen’s hand on this one and ask him to pass my congratulations to Jason Aaron! 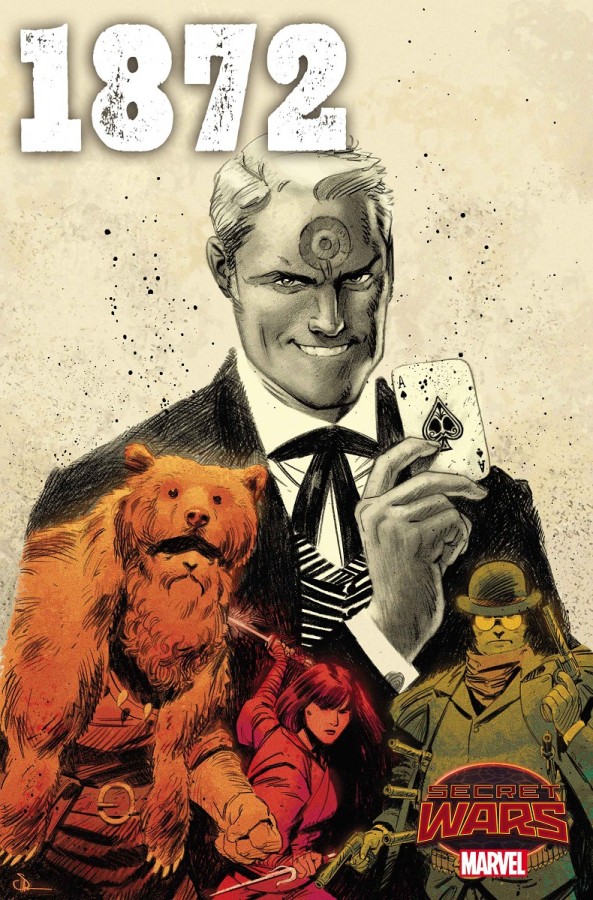 I think I mentioned this the last time I was talking about Issue #1 of this Secret Wars series, but I’m not a Western fan. Still, there is something extremely compelling about this story. It reads like one of the bests – Zane Grey, Louis Lamour – it has that classic, traditional storytelling drama that draws its readers in. It’s a tale that appeals in an intimate way.

I’m also to see local talent in there as well! Leonard Kirk does the cover on this book and as much as I love to see his work, I’d like to see it inside as well. Kirk’s an amazing artist and it’s always a pleasure to see his art in a comic I enjoy.

The Amazing Spider-Man: Renew Your Vows #4 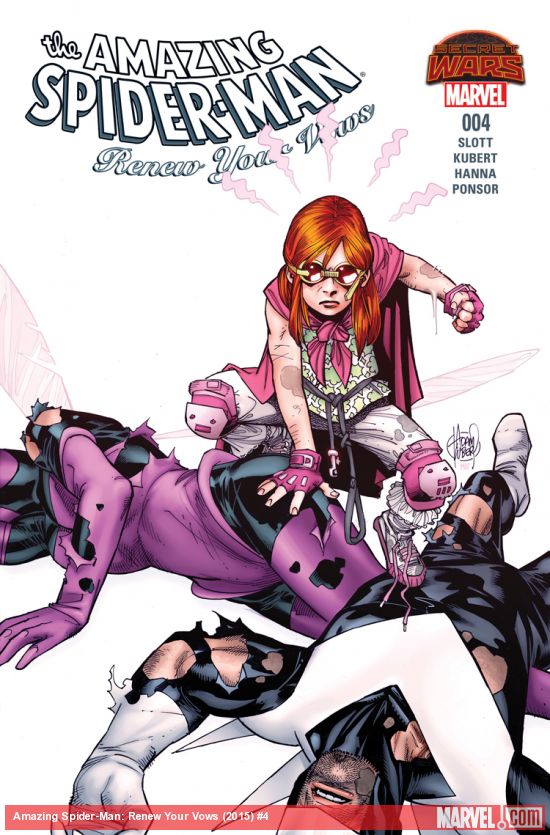 Another new favourite that has arisen out of the Secret Wars assemblage of tales. I’ve said it before, but this is one that appeals to the father in me, but it’s also a chance to set things right. Remember that “One More Day” storyline from The Amazing Spider-Man #545 in 2007? That’s when Mephisto agrees to save Aunt May if Peter Parker gives up his marriage to Mary Jane. He does and effectively, all memory and attachments to the marriage are done away with and it is effectively as if it never happened in the first place. This series manages to do away with all of that and gives Marvel (and Joe Quesada) a chance to redeem themselves.

This issue seems a little forced. The pace is of the plot is accelerated somehow- almost as if Dan Slott is in a hurry to end what is an amazing story. There was a lot of development in the first three issues and it’s a shame that it has to end in five.

Captain Britain and the Mighty Defenders #2 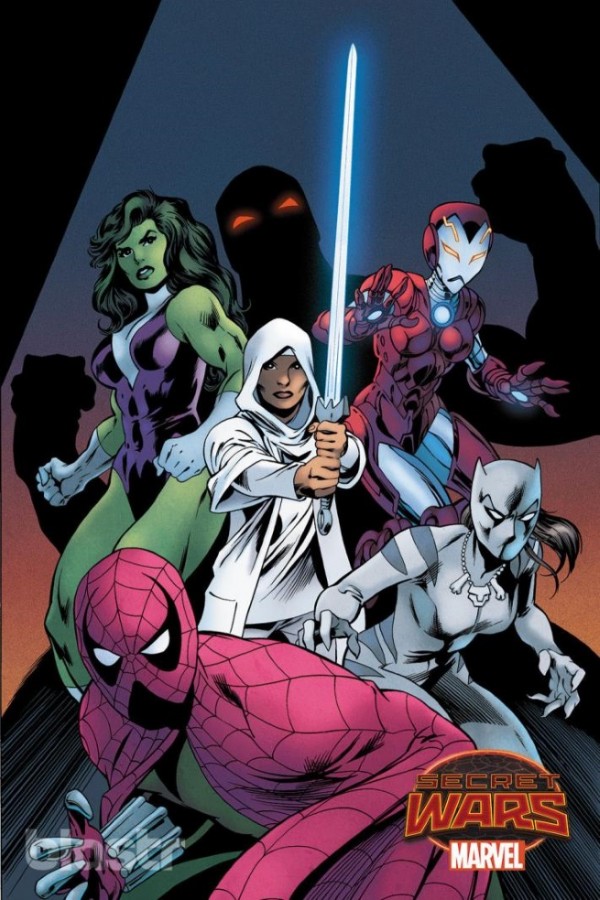 Normally I don’t go for the empty superlatives, but this is a terrible waste of Alan Davis’s talent. Al Ewing’s caricature of Mega-City One from Judge Dredd is not only lost on the American readers who aren’t familiar with one of Britain’s greatest comic characters, but it’s also insulting to reduce it to a comedic foil.

A reader has no sense of attachment to any of the characters and Faiza Hussain’s stint as a hero was short-lived and never fully reconciled from the hastily-ended series Captain Britain and MI-13, much to my disappointment. However, her character was not one that I was fond of and it was never fully described. She’s as obscure in this book as she was in that one, which adds nothing to its value. 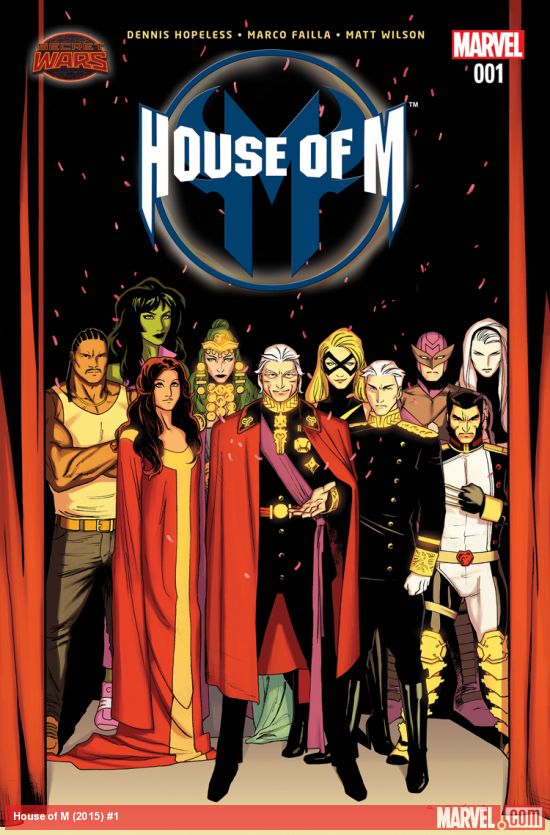 I was curious to see how this turned out. I was never a fan of the original series, but I can’t say it wasn’t innovative. It was a sort of a forerunner to this series in that it changed the entire 616 universe completely by Wanda Maximoff’s reality-shaping powers. It was bold, cleverly written and created some really memorable characters.

However, this falls somewhat sort. It’s a passable story but it’s fairly trite and a play on the Days of Future Past motif. In fact, a good number of these stories play into that storyline a lot and in this one, the mutants are on top. Magneto is a fairly content and passive king, happy to let his family run the kingdom. It’s hardly the classic House of M – more like the Clubhouse of M, really; but I’m actually sad to say I’m disappointed in this one. It could have been a lot better. 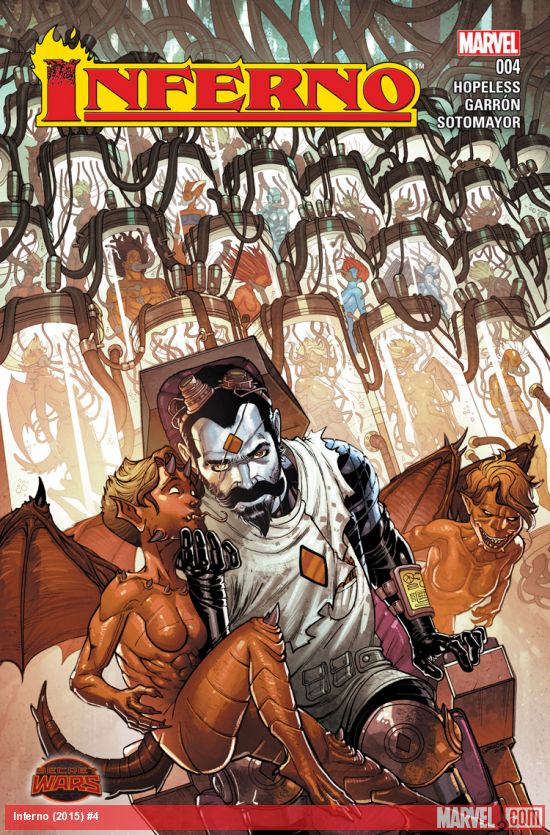 Dennis Hopeless is writing a lot of these Battleworld stories. I can’t say that I’m a big fan, but I will give him credit for the immense amount of writing he’ doing.

I couldn’t get into this one. Too many players – too much action and it doesn’t seem like the motivations of any of the characters are achievable. Colossus has lost his sister, who is in a position of power but doesn’t seem fated to hold onto the domain of Limbo. The Goblin Queen can’t seem to get her claws into it and Cyclops has lost it. Now, in this issue, Mr. Sinister has walked in to lend his support … to who, exactly? It’s a real convoluted mess of a scenario and it just seems to be based on a pointless quest in the first place. 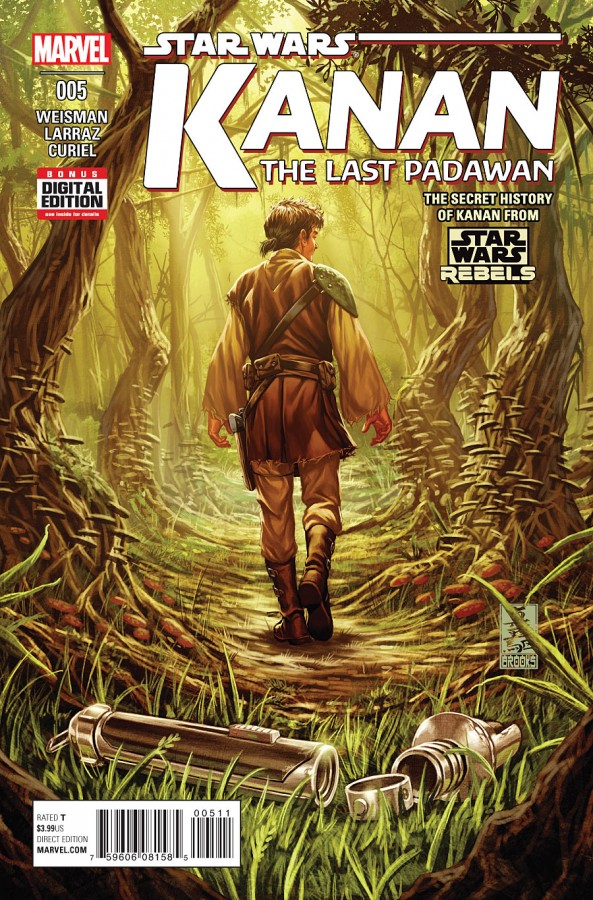 It’s a good ending to the series. The problem this book has is that it’s the last days of Star Wars: Episode III, right? Anything that’s tacked onto the first three prequels is usually doomed or simply acknowledged and never openly spoken of again. That’s a tough sell, but this book has managed to overcome that by putting a more human face on Order 66 and seeing the clones try to reconcile their deeds with their past admiration and fealty to the Jedi. I enjoyed this comic. 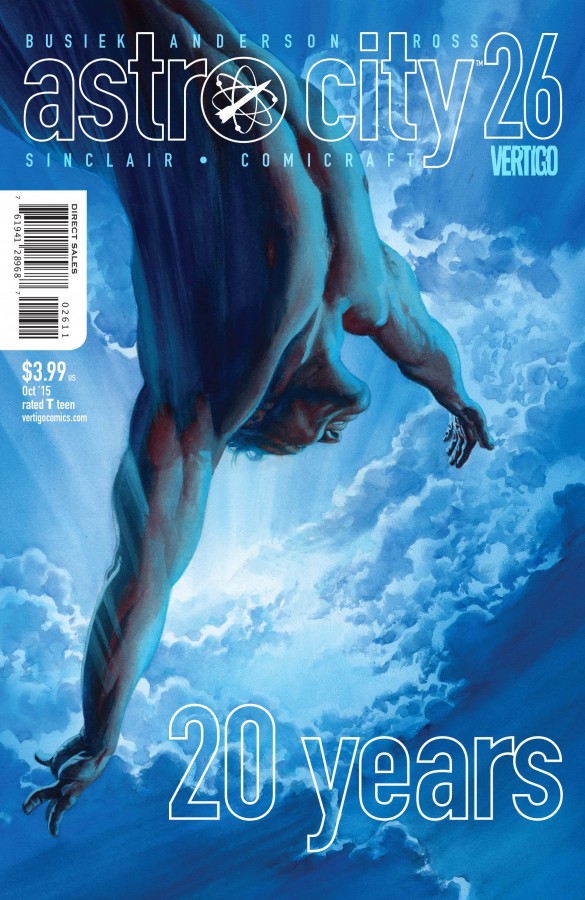 This is the 20th anniversary of Astro City. Remember, this is its second incarnation and it’s a simple, solid story about dreams. Of course, that’s the beauty of Astro City – there’s always a meaning if you look closely. Kurt Busiek always manages to throw in a nugget that sticks in your mind for future pontification. So no special, double-sized, hologram-plated cover; just a decent introspective character story about a hero with the weight of the world on his shoulders. Good, honest storytelling and another great issue to enjoy. 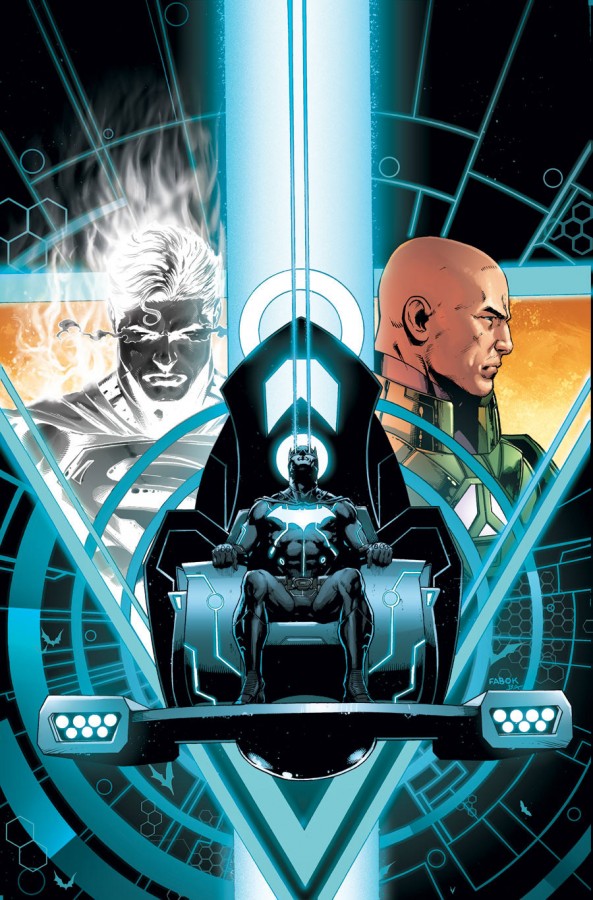 This is part three of the Darkseid War arc and I’m loving it. It’s meaty; it’s got substance and a lot of story development. It’s building to something great and we got a hint of that level of greatness in this issue. There are some amazing sub-plots to behold: Batman in the Mobius Chair, Superman’s ongoing dilemma in trusting Lex Luthor and Kanto’s pursuit of Scott Free. I’m just mesmerized by this storyline. 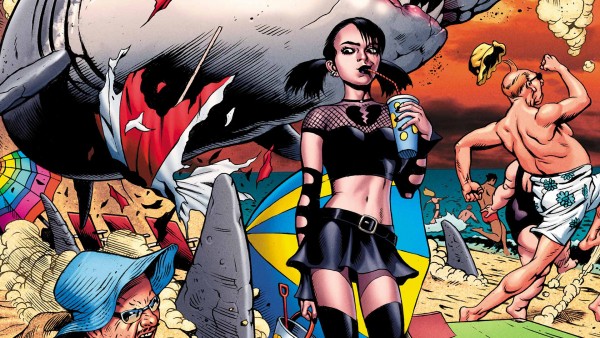 Thoroughly entertaining and what’s more: Dale Eaglesham drew both cover and interior! Oh joy! One of my favourite artists delivering a full comic! How glorious!

I love this book, but I’m trying to figure out how a certain development came about – I’ll not spoil it and leave it for you to read what I’m talking about; you’ll know it when you see it. I have a feeling it’s a Multiverse thing, but I’ll have to make some inquiries.

This is definitely a fun book to follow, but it seems to be understated. I hope that it manages to gain some spin because it’s exciting and worth adding to anyone’s pull lists. 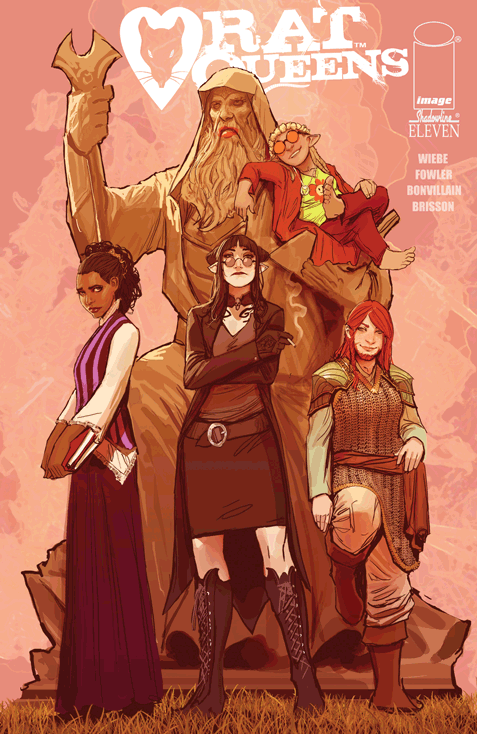 Back to school at Mage University. It feels like forever since I’ve picked up a Rat Queens issue. Better late than never, I guess. Still, the length of time between issues means that I’ve forgotten the current storyline.

I love the irreverence of this book – along with choice of female protagonists, but I do wish that the gratuitous use of the word f*** could be toned down a little. The point is made: they’re women warriors who don’t take crap from anyone.

I’m trying to work out if I like Tess Fowler’s work in this book or not. It’s interesting that she chose to keep Violet’s beard, but Hannah’s appearance seems to have some variation from page to page. She seems to vacillate between Elvish and Human. I can’t put my finger on it, but there was something off. Perhaps it was the duration between readings, but this particular issue didn’t excite me as much as the previous ones have in the past.

Gorgeous cover; of course, that’s Alex Ross for you. If you want a cover that will drag a prospective reader’s eyes to your book, you get Alex Ross.

Written by Victor Gischler and drawn by Robert Castro, this is a true-to-form Conan tale made better with the appearance of my favourite swordmaiden, Red Sonja. I loved reading this – same tone as Robert E. Howard and with the right amount of bravado and swordplay as I would expect. Loved reading every minute of it.

So we come to the end of another week’s run. For the pick of this crop, I’ve got to give it to:

Seriously good artwork in this book, as I’ve already mentioned, but it’s the capturing of the characters that truly amazes me. Jason Aaron is a talented writer but I’ve always known him for his more violent titles like Men of Wrath or Southern Bastards. He really surprised me with the way that the dialogue reads. I can hear Mark Hamill, Carrie Fisher or Harrison For in his words and it’s truly to his credit that he can pull off that degree of verisimilitude. He’s a wonder and definitely is the right writer for this title.

Now if only he could come to Fan Expo as well – I’d get to shake his hand too.