It’s the end of the summer and September is often a month associated with new beginnings. For a lot of people, me included, I think the beginning of the school year has a lot to do with that. We’re looking at new beginnings this week, so without any delay, let’s get to the list. 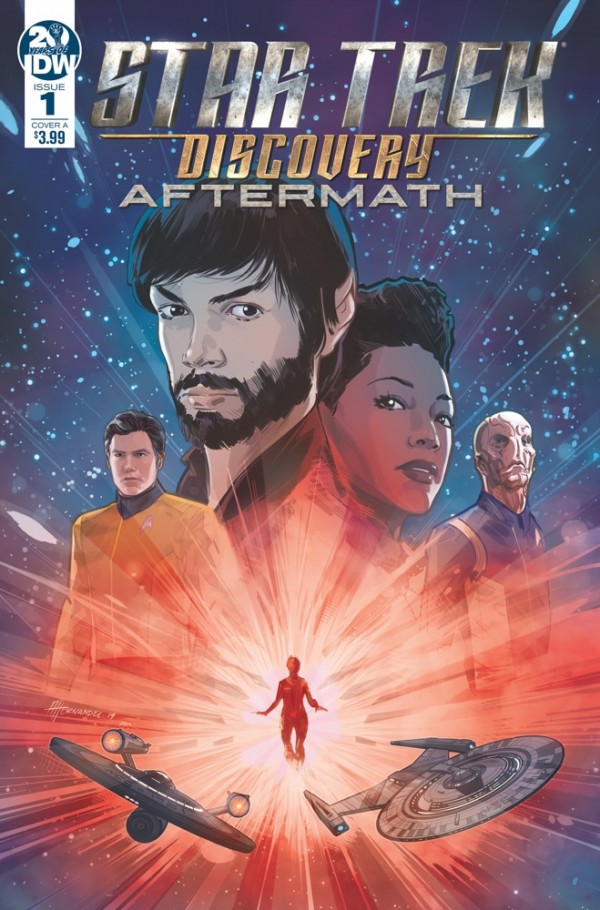 We haven’t seen too much about Star Trek: Discovery in the last little while. Of course, we are in between seasons and they are in fact, in the middle of filming Season Three right now. When we last left the USS Discovery, it had been sent a thousand years into the future. We have very little other information about where the good folks at CBS will take us, and that limits what IDW can do with that in a comic. It’s not like they can begin a new story without knowing what direction the production is heading in.

So, they have to go back to previous material, and in this case, the story is set in between the time of the Discovery’s disappearance and Spock’s return to active duty on the USS Enterprise. Of course, that’s about as close as they can get it.

Written by former Discovery writer Kirsten Beyer and veteran Trek comic writer, Mike Johnson, this book not only sees a greater understanding of Spock’s character during this time of his career, but it also heralds a new beginning in diplomatic relationships between the Federation and the Klingon Empire.

I personally liked this. One of Discovery’s frequent criticisms is that despite its setting in the past, its historicity doesn’t seem to match either the canon of the time before it (as in Star Trek: Enterprise) and the time after it (Star Trek). Either the technology is too advanced or familiar objects, like the Klingons, looked too different. In this comic, we actually see a move towards a closer realignment of the canonical differences.

In the second season of the show, Chancellor L’Rell grew hair, which made her look more like the Klingon females we have known. We also see the introduction of a familiar Klingon character – Kor, in particular, who many TOS fans will remember. In fact, he even resembles the character, despite a few differences, as drawn by the talented Tony Shasteen.

I enjoyed seeing more of Spock’s relationship with the sister we never knew he had and it’s always great to see more of Captain Pike and Number One. We didn’t get enough of them in Season Two and their character appeal ranks very high with Discovery fans. 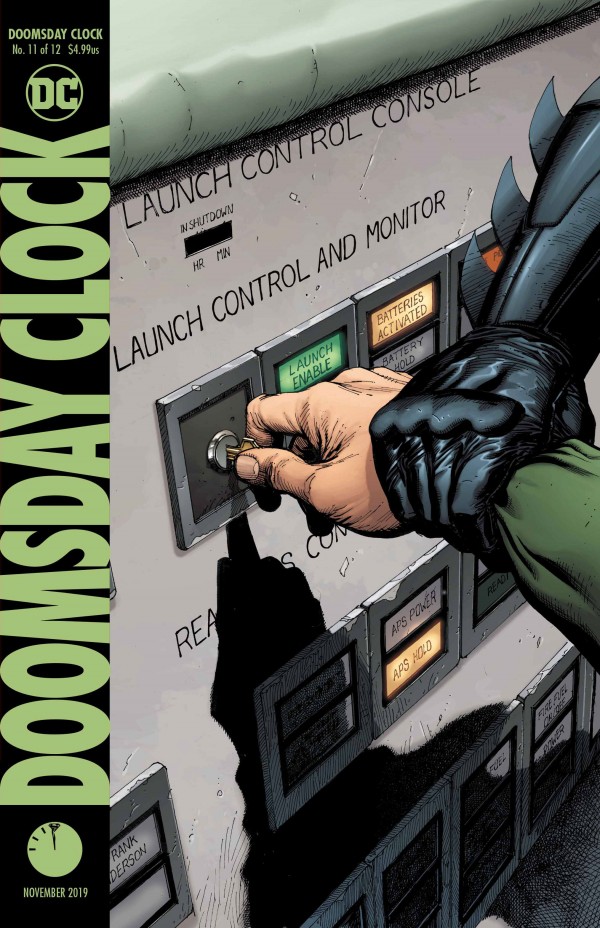 When you’re dealing with a story that has a character who is privy to infinite perspectives of reality within the multiverse, it’s difficult to guess what the ending will be, never mind trying to sort out the beginning.

I wish that was an exaggeration, but with this book, you need to go back to the ten previous issues, see what has happened, re-sequence it and also use information from Alan Moore’s original The Watchmen.

I honestly feel like I’ve gorged myself at some sumptuous buffet and can’t stop going back for more.

I’ve always been a fan of Gary Frank’s work. His lines, his intensity – it’s all amazingly dynamic stuff. The Marionette has become one of my favourite characters in this book, not out of any sense of the character, but simply the way Frank draws her raw emotionality.

To be honest, I am having a great deal of difficulty working this story out, and this issue in particular sees Adrian Veidt, aka Ozymandius, reveal some of his plans to save this alternate Earth.

I’ll warn you: it’s pretty thick stuff. But when Lex Luthor also adds his observations to the recent events of the story, there’s another level added to it that intensifies the complexity of Veidt’s plan. Of course, when you manage to piece it out, you start to see how the other characters all seem to fit in.

I wish I could be more specific, but revealing a little will give away a lot. And, if you’re like me, you’ve been waiting for this book for a bit. I’d hate to spoil it. 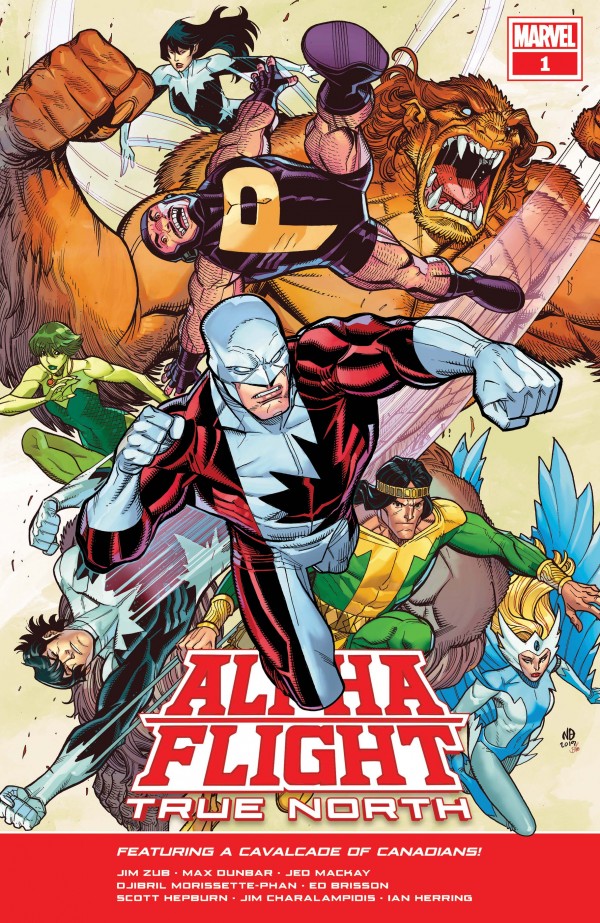 Is this a new beginning or just a nostalgic one-shot? It’s really a lot of fun to see Canada’s native super-heroes in their own book again, created by our own Canadian comic writers and artists, but couldn’t they have spelled colour the Canadian way?

There are three awesome stories in this book. One about Snowbird and Talisman confronting not only Canada’s mystical past, but also Snowbird’s. Next, we read a story about Puck’s mercenary past and understand more about his checkered history. Finally, it’s good to see Guardian and Vindicator reunited again, though I always agreed with Byrne that James Hudson should have stayed dead, there’s a part of me that is happy to see the Hudsons back together again. I’m a softy – what can I say. In fact, it’s this story that makes me wonder if there will be another Alpha Flight series.

Of course, the problem with this book is that it’s always a bridesmaid and never a bride. I don’t think it has a strong chance of ever taking off as its own book again. I’m hoping I’m wrong however, because it’s not only something that I loved as a kid (thank you, John Byrne) but that I think it could make the Marvel perspective of its universe a little more cosmopolitan. It’s astounding to realize how little The United States actually knows about its closest neighbour to the North.

If this is a new beginning for this team, I’ll gladly celebrate its rebirth. 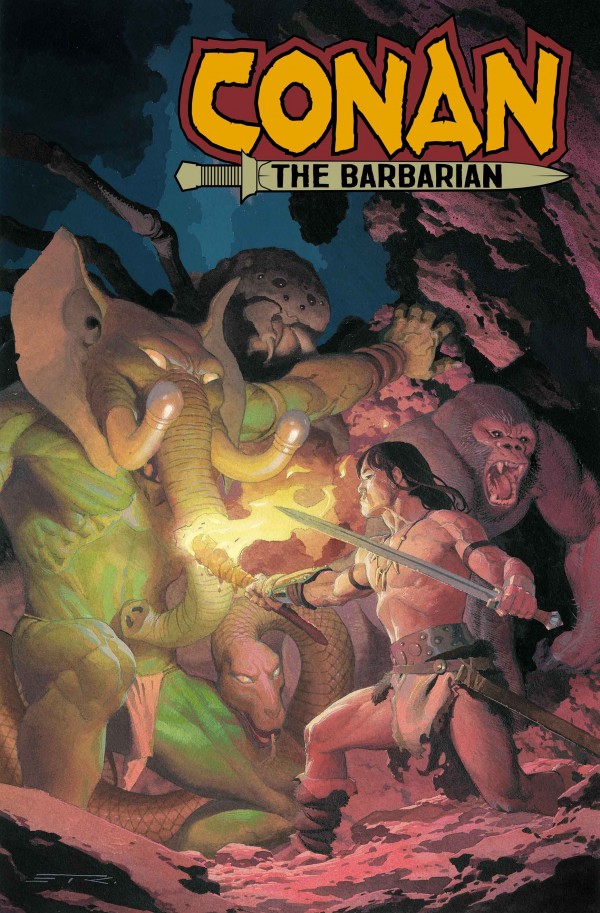 Every adventure for Conan is a new beginning. Remember: Conan is the essential wanderer. In one adventure he steals a fortune and in the next, he’s manacled and walking a slave’s route to be sold at the market.

In this case, Conan finds himself in the belly of a great beast, destined for digestion after a descent into hallucinatory madness. It’s not a pleasant fate, but Conan has found himself in worse situations. Of course, the glory of these stories is that the greater the risk, the more the reader is drawn to the story. Jason Aaron knows this and isn’t afraid to put this classic pulp hero into dangerous situations.

Mahmud Asrar has certainly won my admiration for the portrayal of everyone’s favourite barbarian. There’s a savage ferocity in Asrar’s stylings – the blood spatters, the intensity of the violence, it’s all so graphic and essentially Conan.

Great story and I love that Aaron’s writing it and Mahmud’s drawing this book. 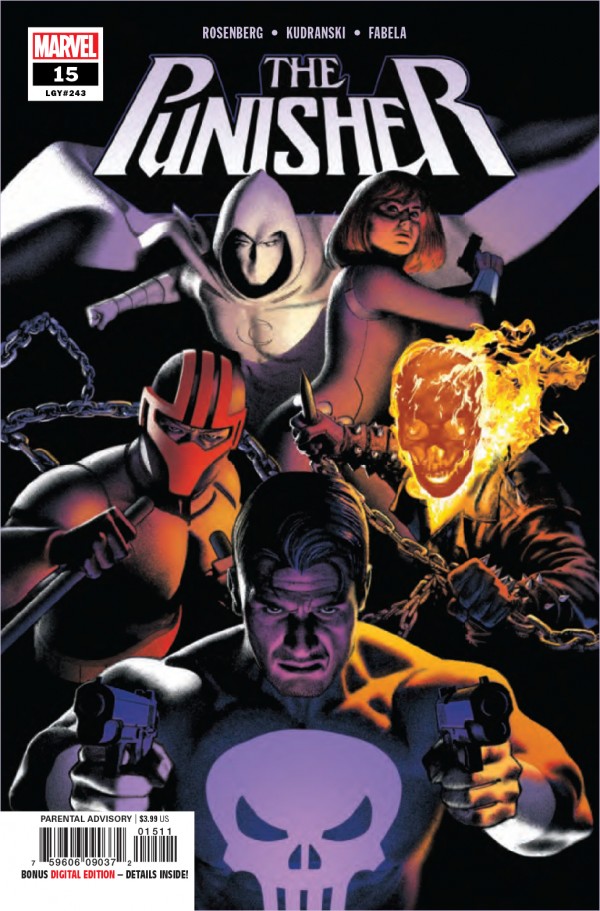 Then there’s everyone’s favourite vigilante. I was trying to describe the concept of the Punisher as an anti-hero to someone the other day and for this person, Frank Castle was indistinguishable from a hero. According to my friend, the Punisher stops bad guys, even though he kills them. He didn’t seem to see that the killing of a villain was wrong. Of course, neither does Frank Castle, and that makes him a character in dire need of a new beginning, if there ever was one.

Frank Castle is at war with Baron Zemo and his HYDRA army in the streets of New York. I love that Matthew Rosenberg has managed to bring the Punisher back to his old stomping grounds, but that he isn’t alone. Moon Knight, the Ghost Rider, the Black Widow, and surprise of surprises, the Night Thrasher have all joined him to put Zemo’s army down.

It’s a great action story, but it also reinforces the notion that Frank Castle will never have a life free of vengeance. 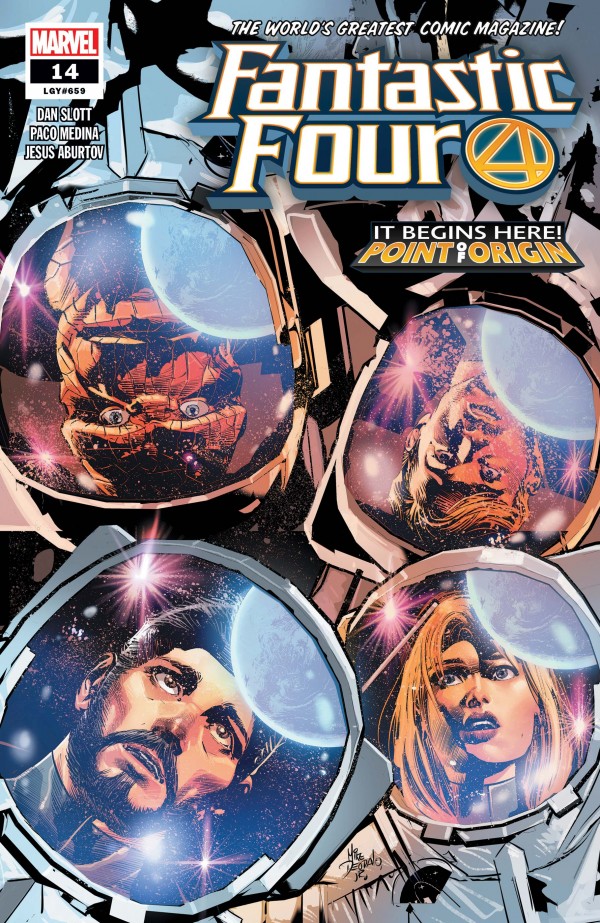 I’m completely loving Paco Medina’s work. I think that, in itself, qualifies as a new beginning for this comic.

However, Dan Slott decides to take the FF back to their beginnings as they see the inclusion of the “Marvel One”, the spaceship that was going to take Reed Richards and the rest of the Fantastic Four to Alpha Centauri. When the shields failed and subjected them to cosmic radiation, they gained their powers.

… But they never did finish that voyage.

That’s the premise of this book, and that is a new beginning as well. When you decide to complete a task that you had long abandoned, there is a great feeling of satisfaction and even the smartest man in the world is still subject to his emotional needs.

I find that Slott has a gift of packaging up raw emotional motivation. I’ve met the guy and I can tell you, he’s a warm, funny and inviting person to hang out with. He brings out a happiness in people he’s with and it’s clear that is part of his writing talent.

If Slott can reinvent this superhero team and make them relevant and relatable to new readers in this century, then he’s a true talent. I have to admire how he can take a story that was originally set in the era of the 1960’s space race and turn it into one that fits in with contemporary astronomical goals. Alpha Centauri is our stellar closest neighbour and the fact that Reed Richards was trying to create an FTL drive that, to his super-genius daughter seems quaint and outmoded by today’s standards, adds a lustre of authenticity to the original story.

I’m enjoying relating to these characters in a new way, and for me, discovering a new way to appreciate a flagship title like the Fantastic Four is enough of a new beginning for me. For that, I thank Dan Slott and Paco Medina and that’s why it’s the pick of the week for this week’s review list.

Until next week, here’s hoping that this month will see more new beginnings that will bring you more success.

Pick of the Week: Fantastic Four #14