The first day of school is a day of anxiety and discomfort; new routines, names, faces, a cessation of an extra couple hours of sleep in the morning and the feeling that the person in that desk sitting across from you doesn’t like you.

… now imagine how the students must feel.

It’s tough to convey to a group of disgruntled teenagers that you stand for something. Your work is not simply making them complete assignments and jump through academic hoops; it’s about creating a sense of accomplishment that academic effort can give you as well as a mastery of communications skills that will be necessary for their adult lives.

Anxiety occurs when the kids don’t get that from you on the first day.

Hence … bring out the comics for this week and let’s see what can take our minds off this first day of the new academic year. 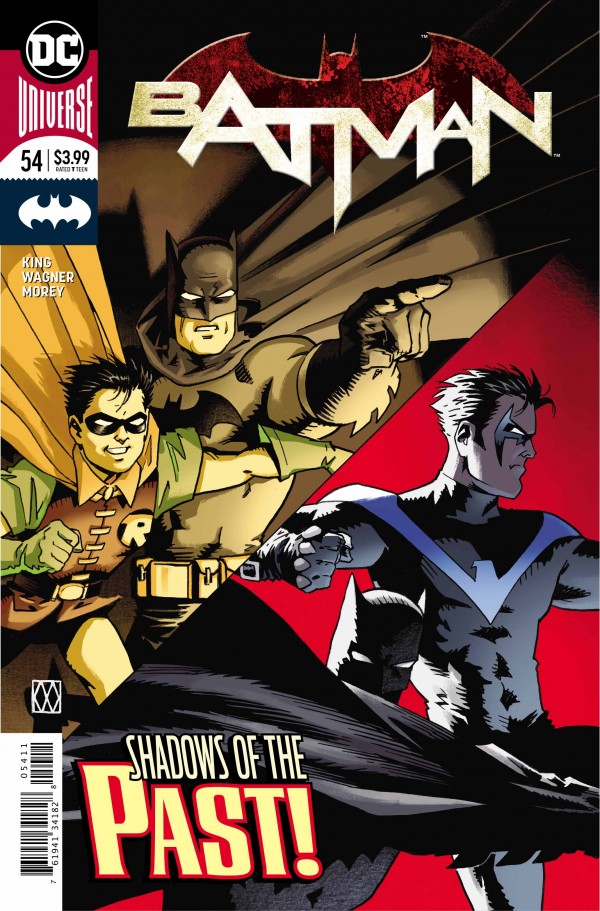 Everyone has something that they can’t get over and Batman is not immune to this saddening aspect of the human condition. Trauma, heartbreak – it doesn’t matter what the source. But what redeems my faith in humanity is that perhaps there is a friend who will be there for you, should you ever experience one of these days.

Bruce Wayne is nursing a cloven heart and it is his former ward, Dick Grayson who is there. This is a wonderfully paralleled structure of a story in which we see the time when Bruce Wayne was there for Dick in hi hour of need. The humanity in this story is poignant and we can’t help but feel sympathy for the two friends.

Matt Wagner pencils this story and I have fond memories of his work on Grendel. Though the colouring might be a bit chalky, it’s good to see Matt’s work again.

There’s dark humour mixed in with a genuine warmth and a sense of caring that I personally responded to. It’s a good story that reinforces the need for friends in a difficult time.

After this week, I could use a plate of cucumber sandwiches myself. 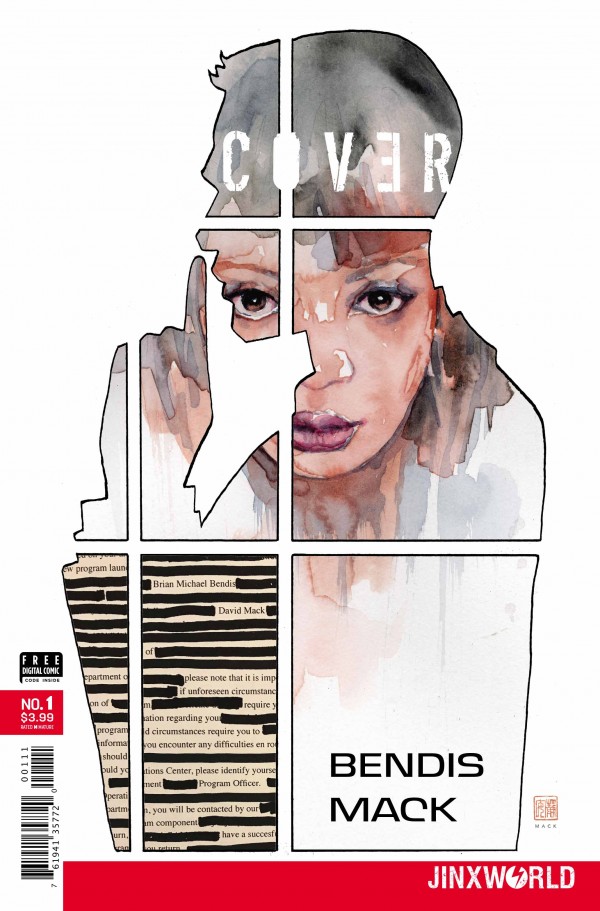 This is a stunningly clever book that Brian Bendis has written and insightfully describes the culture and phenomenon of the comic-convention but adds the dimension of espionage. After all, wouldn’t recruiting a comic artist who travels to different comic conventions be a cool story idea? This is a pretty damn clever idea in both simplicity and relatability.

With art that coasts the borders of the ephemeral by David Mack, I’m fascinated by the directional possibilities that this story can offer. I haven’t really been much of a Bendis reader in the last little while. It’s good to see that he can still offer some pretty nifty story ideas. This one has my attention. 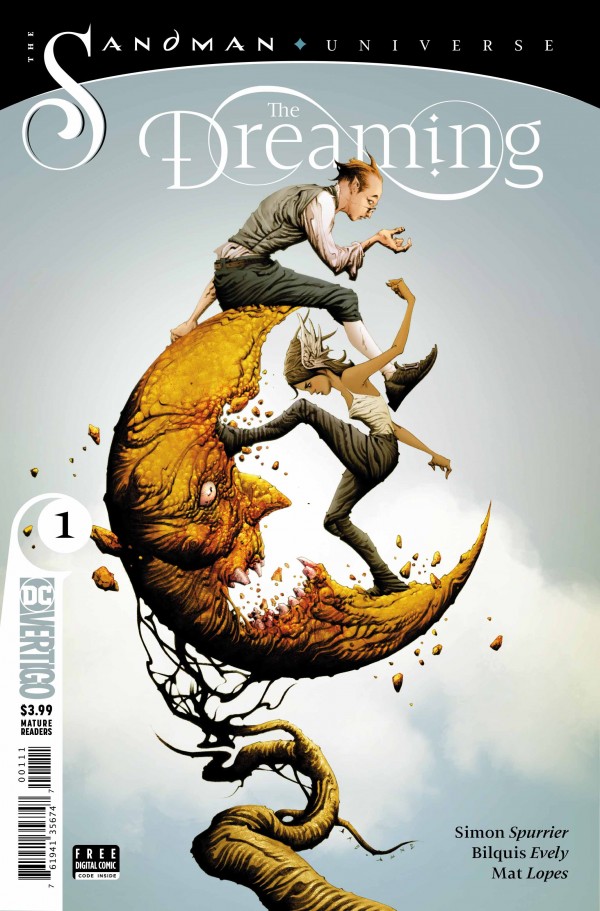 I have missed visiting this realm. Gaiman’s Sandman affected a tremendous amount of 1990’s comic readers with not only its ability to create characters of metaphor that had meaningful and lasting impacts on this book’s audience, but it also inspired creativity in other comic creators.

I was speaking with variant cover artist, Yanick Paquette at Fan Expo Canada 2018 this past weekend about his amazing cover and he had this to say about Bilquis Evely’s art:

“She’s just like this old soul artist who has this incredible range of talent crammed into her body. How old is she? 26? 27? But watching her work, with her tools, her skill … she’s simply amazing. I just love her work.”

There’s no doubt this is a beautiful book, but Si Spurrier has given us a degree of anxiety as Lucien, the former librarian-turned-steward of the Realm of Dreams is aware that his master has left his post and that the fabric of the kingdom is fraying. The question is, how long can Lucien manage to keep the borders together and turn away invading threats?

DC has been steadily publicity pumping this book for good while and it’s very reassuring to see that it measures up to the hype. 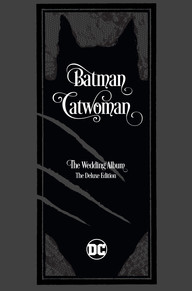 I saw a copy of Tom King’s Batman: The Wedding Album before Fan Expo Canada 2018 last week and despite the controversy over this story, this is an incredible hardcover collection of art that is absolutely lovely to behold. I was talking with Tom about this book too and we shared the opinion that it’s a great compendium of the story and art.

Any Batman fan would love to have this in their collection. It retails for an incredibly low price as well, for about $17.99 on Amazon, if I’m not mistaken. 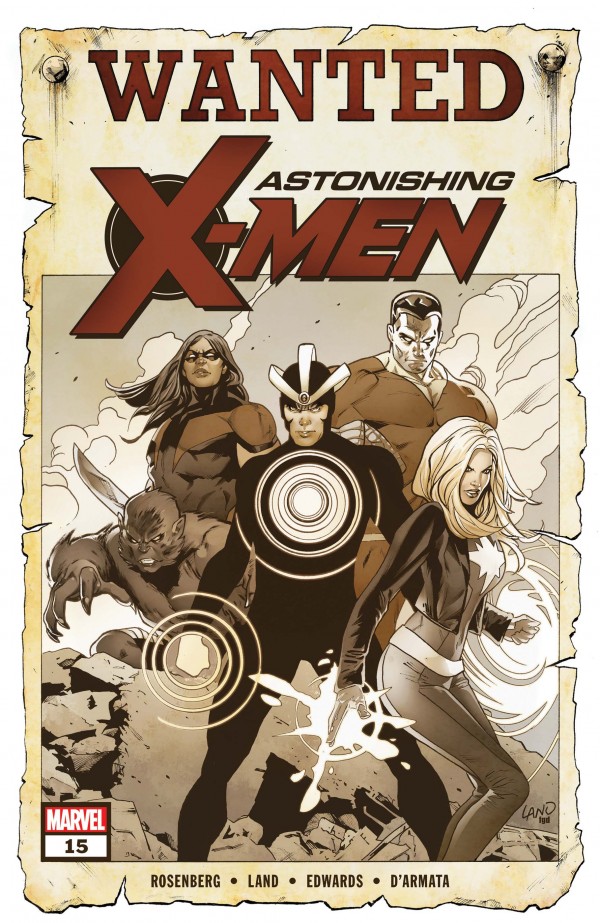 In this issue, he’s definitely flying that flag. Not only is Havok feeling like a second-stringer but he’s lied to his former team-mates about the reason to get together and has even been disavowed by Kitty Pryde as not a sanctioned X-Men team.

Life can’t get any lower for a super-hero when your own teammates can’t even trust you. There’s got to be a degree of anxiety around that realization.

I like how Rosenberg is resurrecting the Reavers, right down to their original clunky cybernetic chassis’. There’s even a nostalgically funny reference in the dialogue to that effect which just goes to show that Rosenberg is the most accurate X-Men writer out there right now.

Greg Land’s art is always dynamically exciting. It’s art that a high-profile team like the X-Men need. This is a great book on my permanent pull list.

This book is a great revisiting to the otherworlds story in the future where Old Man Logan is from. Set in this world, Logan has to rescue kidnapped kids from a low-level gang called the Punishers who popped up in the absence of the Hulk Gang.

While I am a definite fan of Ed Brisson’s treatment of this character, it’s great to see Logan return to his roots. Also, Brisson brings in “Old Man Punisher” in this story which makes for an added treat as we see an aged Frank Castle appear as he assists Logan mete out justice against the barbaric gang that has abused his name.

This is a fantastic tale to read. It’s also refreshing to see Logan actually fight without fear for his handicapped healing factor. Even though that’s the angle of the character in this condition. It’s just really entertaining to see Logan cut loose again, no pun intended.

“Hope Dies – Part IV” has got to be my favourite arc of this comic to date. Not only did we see Darth Vader and Han Solo square off against each other in a deadly man-on-man starfighter battle as the trapped rebel fleet lies helpless before a flotilla of Imperial Star Destroyers. However, with the intelligence that Solo was able to deliver to the rebels, they learned that the bay doors on their ships would automatically open if a rebel starfighter broadcast a transmission at them.

The rebels are back in the fight with the release of their starfighters. However, the codes to release the ships back to their control are on the Imperial flagship, the Executor.

This is the type of adventure that you forget would cause any of us non-heroic normals to suffer a cardiac arrest. Let’s face it: these stories are harrowing tales of daring and slim -to-none chances of survival. However, the fear is palpable in this book. It’s a truly visceral experience to read this story and even tense; that’s the Star Wars I remember from the movies.

It’s incredible and while this may not be the story to relax this tense teacher after the first day of school, there’s no denying that it can’t take my mind of things.

That’s why I’m declaring Kieron Gillen and Salvador Larroca’s Star Wars #53 to be the pick of the week for this instalment.

Marvel has a real goldmine with this talented pair of creators, working on one of the most recognized franchises of all time. Even the timing is right, placing these stories in between Episodes IV and V, which brings back that original flavour of the Star Wars that captivated my imagination and sense of daring when I was going to school, instead of teaching it.

Yeah, I needed this story this week. If not as a distraction but as a reminder that my adventures at school are nothing compared to force-landing the Millennium Falcon upside down.