Exploration requires a special type of courage. To even want to go to a place where there are no definites, no assurances, or protection is a risk that a lot of us – including myself – simply don’t want to undertake. That’s a measure of greatness that, at least, I know is missing in my own life. I think that’s why I love Star Trek, and for this week’s comic run, why I’m so excited to talk about Star Trek: Year Five #14 (Jackson Lanzing, Collin Kelly, Angel Hernandez, Fran Gamboa, Neil Uyetake, Chase Marotz and Denton Tipton). 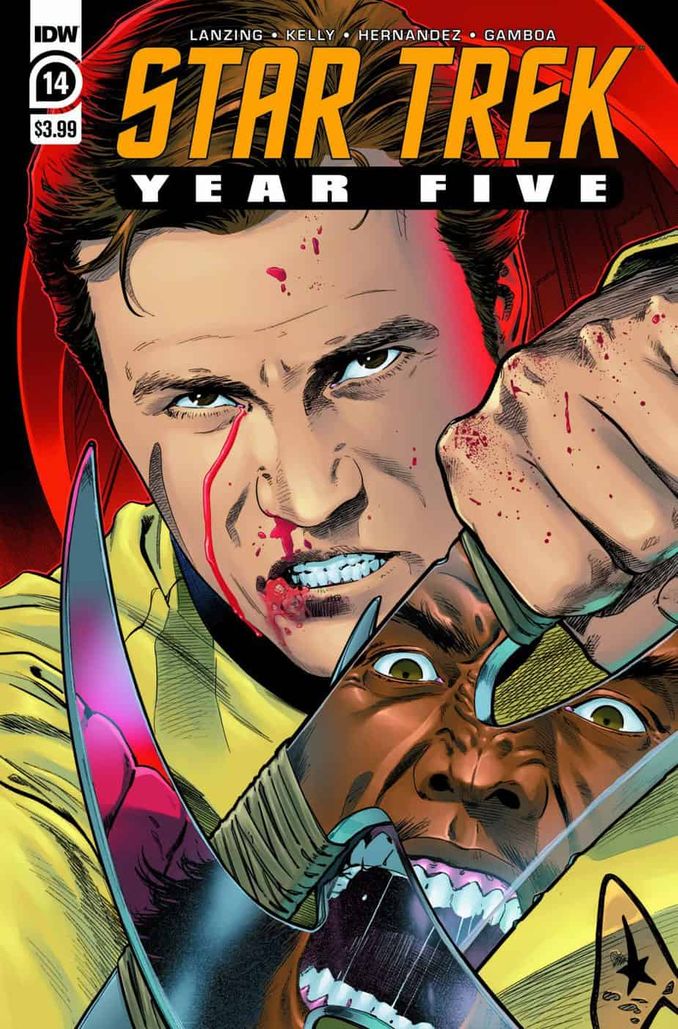 First of all, I’m writing this review on Star Trek Day – September 8, 1966 saw the release of Star Trek (TOS) on NBC in the States. However, what few people realize is that it was first aired on Canadian television (specifically the CTV network) two days prior. However, it was an act of bravery to both networks’ credit, so even though I’ll plant the Canadian standard of patriotism and good sense, I’m just going to be grateful to both.

Courage is what makes great things happen. Whether it’s a great risk, a great story – fortune favours the bold and that’s a tenet of Star Trek that I have not only admired but wanted to emulate in my own life, despite my own timidity.

My personal hero has always been Captain James T. Kirk because he lacks fear. Yes, I know he’s an ideal, but we all strive to live up to ideals in our lives because of those heroes, real or imaginary, and that’s what makes a story compelling. In this case, Kirk’s fearlessness and unrelenting drive to pursue what’s right, regardless of the personal risk he faces.

“Risk is our business.” Remember that one?

In the issue before this, we saw Kirk as a prisoner on board a Klingon Warship; the design that may be familiar to those of us in the post Five-Year voyage era, but during this transitional time, is the appropriate time to showcase to new fans when it could have first appeared. Kirk is to stand trial for what may be considered frivolous reasons, but to the Klingon Warrior known as “The Guide of Fire”, he is a perpetrator of some of the greatest affronts and crimes to the Klingon people and their concept of honour.

If Kirk does not undergo the Gauntlet the Klingons have arranged for him – which is most certainly a death sentence – then they will unleash a weapon that will obliterate the entire task force that has appeared to meet with the Enterprise.

It’s a pain-filled story. I won’t begin to describe the tribulations, the pain that Kirk has to endure, but it’s the measure of his character that Kirk willingly throws himself into the fray. Why? Well, there’s the matter of at least a score of starships that stand in peril. One life weighed against all of those is an easy equation for him to resolve. Also, there is the matter of the friends and his crew on board the Enterprise. How many times have we seen Kirk’s willingness to sacrifice himself in favour of his ship and crew, not to mention his friends?

Kirk manages to allay his fear with the knowledge that his death, should it happen, will save lives.

I don’t know if I’d be able to instantly make that decision; I’d like to think I could.

But, that’s the allure: to be vicariously brave through the eyes of this legendary hero.

Lanzing and Kelly effortlessly capture what I love about Kirk best. In fact, I’d venture to say that it’s what most other fans admire about him as well. Kirk has been criticized as being reckless, comporting a “cowboy” attitude. Maybe that’s something that Americans can readily identify with, but for me, it’s a recognition of values. It takes a degree of intrepidness to throw oneself into harm’s way for the sake of others. It makes for a good story, but there are people in the world who would readily do this, and it’s that knowledge that makes the story compelling.

What I also like about this story is that Lanzing and Kelly easily tap into that dimension of Klingon enmity for Kirk. For the longest part of my Star Trek, the Klingons were the chief villains, and Kirk had a particular penchant for them. Perhaps it’s a factor of the limited run of the original series, to be sure, but in the cinematic TOS, there was an even more developed sense of animosity between them and Kirk. Yes, of course, in latter versions of Trek, the Klingons are allies; evidence of the progressive nature of Trek, to be sure, but there’s nothing that can replace the visceral sense of enjoyment of a violent and vicious antagonist confronted by a brave hero.

Of course, there’s the subplot. Spock and McCoy continue to investigate a conspiracy that not only runs antithetical to the very nature of the Federation, but also ties itself well into the outcome of the overall story. But, more importantly, it serves to cement the bonds of fellowship between them and Kirk, which is another one of my favourite aspects of the original Trek series. Friendship lends itself to bravery.

Then there’s the art. I’m on record for having been a big fan of Angel Hernandez’s work on other Star Trek books from IDW. It’s sharp, dynamic and definitely is the style needed as we witness Kirk endure a number of Klingon tortures and personal combat. It’s fluid, fast and reinforces the pace of the story. With the combined efforts of Fran Gamboa’s colours, this is work that doesn’t disappoint.

Star Trek: Year Five #14 is the pick of the week for this week. It’s appropriate on what is referred to as “Star Trek Day”. Exploration is what Star Trek is about, to be sure, but at the same time, we need to remember that the work of exploration also attracts danger. Characters like Captain Kirk have a classic type of courage that is not only irresistible but something that we hope to see ourselves capable of, and that not only promises a great story but also instils within us the promise of greatness.