I’ve been struggling with a theme for this week. I think it’s because I’m after that initial stage of transition – where everything begins again. I think the stage after you’ve started something new is a comfort stage. So, that seems like a good area to place my comic-reading for this week. yeah, I’m looing for something to comfort me this new comic book day. To all those comic creators out there who are writing for my entertainment? Yeah, comfort me. Let’s get to the list.

I am deliberately reading this for a needed sense of closure and comfort. I have to know that Batman will be able to wrest control of his city, especially after the devastating murder of Alfred and the kidnapping of his son. See, here’s the thing, in this issue, that primarily centres on his recuperation – that also is directed by his ex-fiancée who jilted him and broke his heart? Yeah, how is that therapeutic?

Oh – and he doesn’t know about the kidnapping and the death of the closest person he’s had to a father. This is hardly comforting, and to my mindset? This is absolutely horrifying.

Tom King knows people though. This is a guy who used to play people against people in his career at the CIA. Though he doesn’t say much about this time, if there’s one thing we can discern about him, it’s that he knows how to push emotional buttons.

I have never wanted to get one guy drunk and have him spill his guts to me than this guy.

It’s the emotion that King pushes in this issue. As readers we are clearly concerned about Batman’s recuperation and his ability to face Bane, and the other-dimensional version of his father, for control of his city. Bane has broken him before but King weaves in the fact that Batman has also been emotionally compromised by Catwoman, who essentially left him at the altar. How can he get stronger resting in a tropical resort with the incredible ideal of a woman who destroyed his heart?

But there is one sentence that Batman says in this that, I think, is intrinsically at the heart of Tom King’s own character, and ultimately his understanding of Batman. When Catwoman asks him if he is tired of lying, he replies “all the time”. And that, my loyal readers, is Batman.

Clay Mann’s art is stunning. If there’s one thing this guy knows how to draw, it’s really pretty people. In fact, the scene where Catwoman walks away and the bartender asks Bruce Wayne if that’s his wife is one of those essential achievement moments in any partnership’s existence. Clay Mann captured that perfectly.

To be frank, Tony Daniel’s striking cover promises a lot more that’s what’s included in this issue. Still, it’s a really good continuing chapter in the Bane saga and I am eager for its climax. I think THAT will be a comfort. 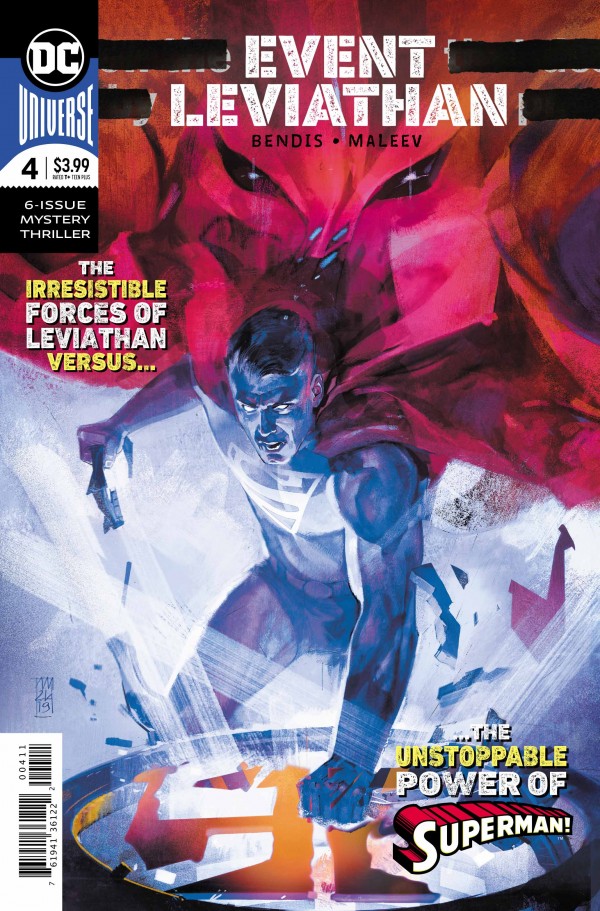 I like how this is described as a “mystery-thriller”. It’s a mystery alright, but while I am definitely curious as to the identity of “Leviathan”, I don’t find I’m thrilled; more like, frustrated. We are four issues into a six-issue story and while I still don’t have a clue as to the identity of “Leviathan”, I am feeling that I am at the point that I don’t really care any more.

Maybe I’m just too obtuse? Maybe I’m just not good at mysteries, but I’ve gone over this book a few times and I’ve had difficulty trying to ascertain any clues (even when Batman says “a clue”) about who Leviathan is.

I’m trying to look for the positives in this series, but I honestly can’t get into it. It’s been four issues. Sorry, Brian Michael Bendis – I gave it my best shot. 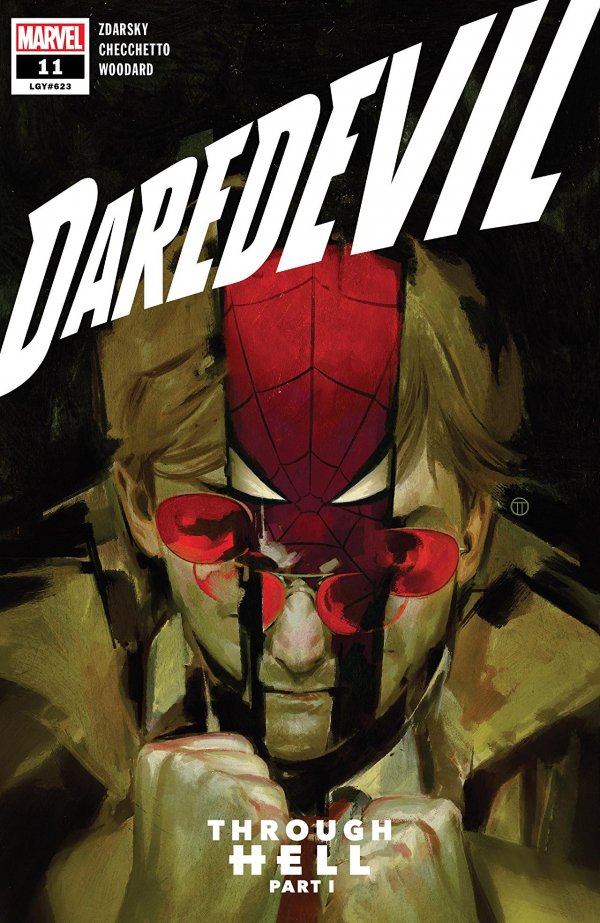 Chip Zdarsky (it strangely amuses me how I need to input this guy’s name into my Word dictionary), Marco Checchetto and Nolan Woodward make reading this book a comfort.

You see, I get guilt. I was raised with guilt and I’m a teacher, so that means that every moment I spend in my job is subject to scrutiny. But at the same time, I also have an inherent desire to do the right thing, even if it means at the expense of my time away from my family. People’s kids become mine and when I see that those parents are doing wrong by their kids, well, it’s a tough act to follow sometimes.

I get Matt Murdoch, more than any other hero and Zdarsky has made that criteria aware to me.

Part one of “Through Hell” is the first stage of Matt Murdoch’s recovery. He’s no longer the original Daredevil; he’s lost that “killer instinct”, if you will, but he still wants to help people. However, he’s lost his edge and it’s up to people like Elektra to get him back into his game.

But is he up for it? Hopefully so.

There are two protagonists in this story. The second is Detective Cole North, who is also wondering about his own values. Not only has he learned that the very organization he works for is corrupt, but that he was rescued by the person he swore to bring in. He gets help in reconciling this contradiction from none other than the friendly-neighbourhood Spider-Man, who makes a guest appearance in this story to tell Cole North the real truth about super-heroes in New York and to correct him on his preconceptions.

Actually, Zdarsky really deserves a shout-out here. In two frames, he manages to deliver the perfect encapsulation of why super-heroes do what they do. It’s concise, it’s visceral and yeah, it brings me a great deal of comfort. Because if Zdarsky can validate these characters’ motivations, then he can also validate why I read about them. Let’s face it: wouldn’t you want to be a super-hero? Not for the powers; not for the fame, but yeah, it would be nice to help someone in a real way.

Checchetto’s art really took off in this issue. The Owl’s confrontation with the Kingpin has to be one of the greatest scenes this artist has put together. His characterizations of Mindy Libris, Cole North and Spider-Man were sharp and well-defined. This was his best issue to date, in my opinion. 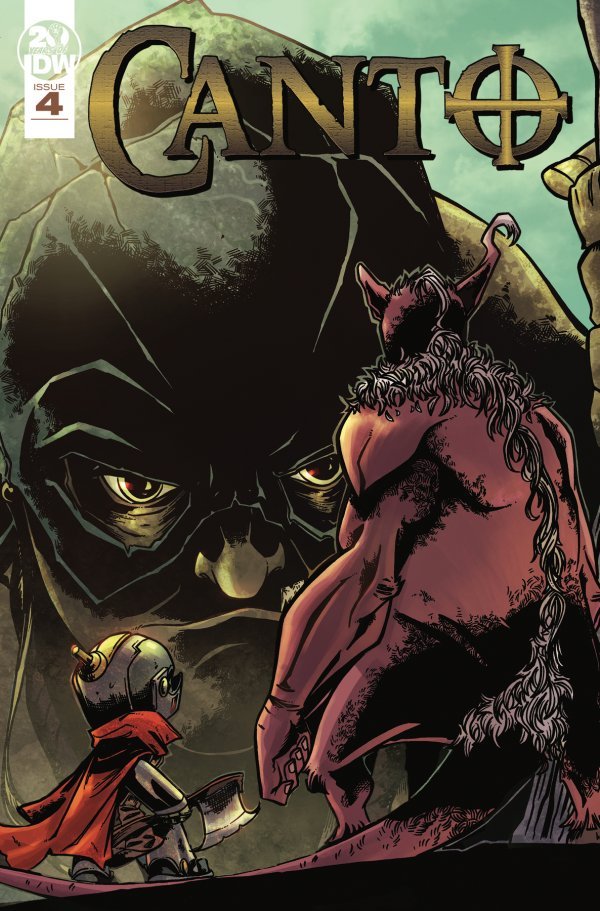 And then there’s this plucky little hero who won’t say die.

Being able to rely on someone is probably the greatest comfort someone can have. Canto is the embodiment of that someone who will die before letting you down.

I must confess that I’m a pretty sentimental guy, and loyalty and devotion really get to me. I’m Scottish and my clan’s motto is Stand Fast. That means something. It means that you don’t bend, break or give in and in this case, you stand for your friends. that’s a devotion that’s somewhat lost in this world and Canto reminds us of that type of relationship.

In this issue, Canto and his Malorex arrive at the City of Dis to find the Shrouded Man who can give Canto’s love back her heart and save her life. He meets a companion who is on her own quest and gives him insight and advice on how to proceed upon his quest.

This is a more descriptive part of the story with a richer setting in this imaginary land, that, to be honest, I have been intensely curious about. I was happy to explore more of David Booher and Drew Zucker’s creation, but to be honest, I don’t think six issues is enough to give me as much of this world as I want to see.

I want this little hero to survive. It’s a comfort to me to know that people still believe in characters like this, because if they can imagine it, then it can exist, even if in story format.

It’s odd because this is not the type of comic that I normally fall for, but this book has won me over and its values and message are not one to be overlooked or underestimated in this society where disparagement and selfishness seem to dominate. We need friends like Canto and he’s a model for us to aspire to in our friendships with each other.

So, once more, Canto #4 is the Pick of the Week for this week’s review list. When this little hero succeeds, I feel like I will as well.