I think that’s a quality in short supply this year. I mean, we all know that COVID-19 isn’t going to be here forever, but the strife the whole world has to endure until it runs its course or we develop a virus is pretty harrowing.

School starts for me this week. I will engage with students for the first time this morning (as you read this, think positive thoughts for me?) and I worry about what effects the exposure to more people than I’ve been in a room with since March will yield. My oldest, cancer-survivor daughter is remote learning from home and my youngest is at a private school, owing to her disability. My teaching position has been redeployed and all in all, the start to the school year looks as trepidatious as any precarious comic plot.

I think I’ve always gravitated towards comics because of that sort of angst. I can’t remember a time in my life when there wasn’t something to worry about, but we all need the fantasy of heroes and victorious adventures to carry us through the harsh realities of life. I mean, I know that when I read a comic of my favourite stories or heroes, I get a bit of a rush. I begin to dream: if they can do it, so can I.

So, I’m looking for Hope this week, and there’s no better place to start with Star Wars. 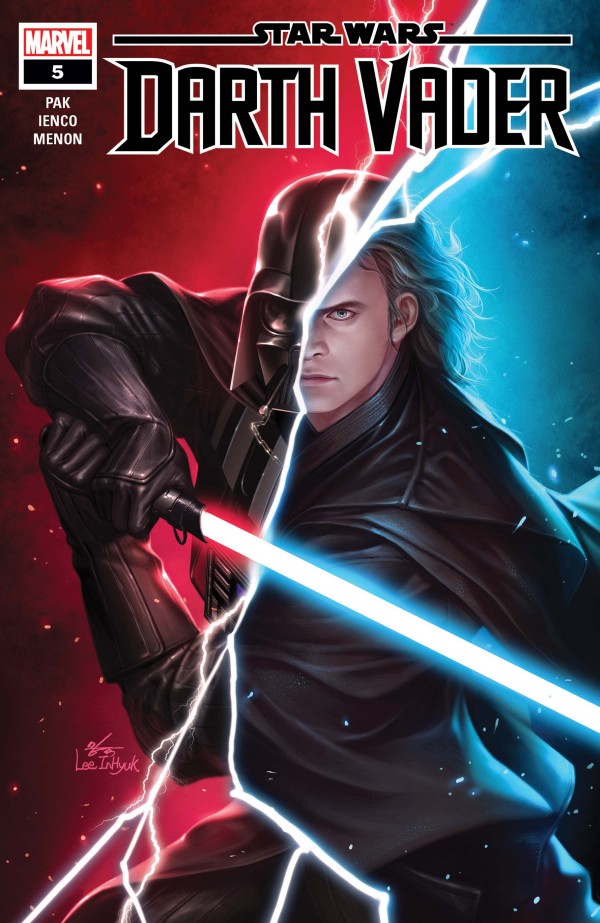 This is a story of Vader’s reaction to the discovery AND revelation that he is actually Anakin Skywalker, Luke Skywalker’s father. Despite Luke’s rejection and Vader’s subsequent rage, the story possesses the embers of hope that set the scene for Episode VI with the words “there is still good in him.”

As Vader seeks to learn more about Padme Amidala and his lost son, the clownish behaviour of his forensics droid serves to highlight Vader’s smoldering anger. Not only does the simpering robot allow, excuse and explain Vader’s actions – especially when faced with the Amidalans – he also acts as a comic relief who provides a balance to the heavy emotions of regret and guilt. Remember: these are the things that the Sith are vulnerable to, and as Vader experiences them, he is filled with self-doubt and uncertainty. It’s an excellent example of internal conflict within one of my favourite characters.

Speaking of which, Greg Pak is one of my favourite writers. He takes emotional moments like these and capitalizes on them. Oh hell, he milks the living daylights out of them, but franchise-lovers want that; it’s hardcore emotive stuff that resonates with fans as not just high drama but a passionate response they can respond to. He’s gifted in that he can feel the characters and write from that perspective.

I especially enjoy the connection between the end of Episode III and this book. It’s a chance for Vader to reflect upon the consequences of his Sith-fuelled rage and trace the timeline of his decline into the Emperor’s slave. Once he was a master, but now, he is just a pitiful creature who serves at the whim of his new master.

Raffaele Ienco’s art is great; no other word for it. I have to admire the way he positions Vader in that same neutral expression in which rage isn’t registered by his face, but rather the angle in which Vader holds his helmet. So much emotion is communicated by this artist with such limited means at his disposal. It’s really quite gifted.

However, while this journey is truly cathartic, it doesn’t have enough of the hope that I needed to sustain me in this challenging week. But it’s a Star Wars filled article this week, folks! 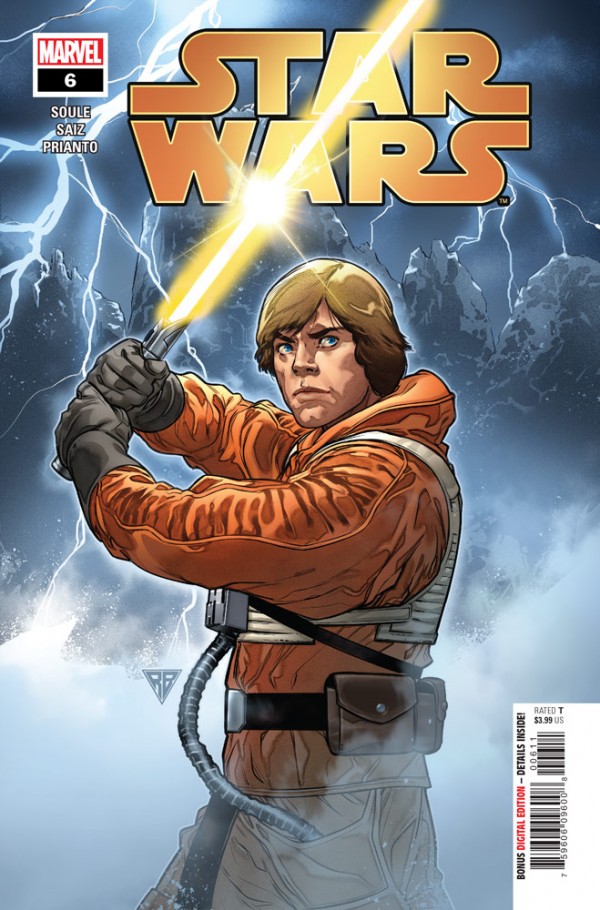 First off, I have to state that I love the timing of these two books. Not only are they published together, but the storylines are set around the same time. While Vader is chasing down the identity and information on his son in his own comic book, Luke Skywalker is searching to replace what he has lost in his first encounter with his father, namely a lightsaber.

The continuity between these two creates the impression that the creators involved with this book not only love their work, but they love the franchise they are working on. I don’t know if anyone else noticed that, but it’s definitely worth mentioning because there is a subliminal effect of appreciation that is communicated, and received by the audience.

Luke’s journey in this book is to justify not only his character but the vision he received through the Force that showed him where he needed to be.

You see, this is what I love about Star Wars. Not only is it an adventure, but it’s a validation of the faith that we all feel within ourselves that if our cause is just, then the means to accomplish our goals will be successful in the end. Star Wars is all about hope, faith in ourselves and the righteousness of doing good in the world. It truly is a romance, because we know that the world isn’t like that in real life, but wouldn’t it be good to dream that it could be?

I think Charles Soule is like that. Meeting and speaking with him in the past, I’ve gotten that he has that sense of idealism. I mean, he is a former lawyer, right? I’ve seen it in his other writings, but in this particular issue, it definitely comes out strong. Luke meets a jaded would-be padawan who understands the danger of being Force-sensitive and has hidden herself away from any would-be seekers. She sets a trap for Luke and he is saved by his trusty sidekick droid, R2D2. However, when he is ready to confront his assailant, he gives mercy instead of revenge.

I don’t think I could be that generous in the same sort of situation, but wouldn’t it be great if I could?

Soule’s understanding of Luke’s inherent goodness and a bit of innocence not only give the reader a bit of faith in humanity in general but also reinforces credibility in the concept of hope – and that’s the essence of Star Wars, in my humble opinion.

But, like a Knight-Errant, Luke has a quest to fulfil, and he is besought upon all sides by villains, traps and unforeseen obstacles. He still presses on, which, not only confirms what we know about his character and taps into that same stream of emotive force that Star Wars can evoke out of its fans, but re-affirms our need for a hero, particularly in these trying times.

Speaking of trying times, the artistry on this book by Saiz not only displays Luke’s intensity in the pursuit of his quest but also the cynical expression of Verla as she recounts her dissuasion with the Force. Soule gives us a cynical perspective to the force and that is reinforced by Saiz’s artistic emotionality. It’s more effort to draw emotion than action, and that’s something that I definitely picked up in this book, and that’s why it definitely resonated the feeling of hope – and that’s something that not only I need, but that teachers everywhere need as they embark upon teaching in a COVID19 environment.

I watch Star Wars when I’m feeling disenfranchised. I read the novels and I look for good stories that can infuse me with the same sort of romantic sense of hope and grit defeating overwhelming adversity. But, in all the stories of Star Wars, what people fail to see sometimes is that there is always a plan. It may be a plan that has very slim chances, but it is a plan nonetheless. With a plan in mind, we need determination AND hope to pull it off, yet it’s the hope that gets the credit.

The plan that a lot of teachers have this week isn’t all that good. We can’t distance; we can’t trust in the behaviour of our students, and we certainly can’t say that our governments have our backs. Economies need to continue and the key to that is getting kids to school so that their parents can go to work. As plans go, we know it’s not the best.

However, it’s the hope that will bring us through. In the end, I need to hold my laptop or chalkboard pointer high in victory and success. Right now, that needs to be my vision. I want to find my own lightsabre and feel like I have accomplished my own heroic quest.

Star Wars #6 is my pick of the week. It has pragmatism measured by romance. We need to feel like we can succeed in order to overcome the adversities in our own lives, and that’s what Soule, Saiz and company manage to convey.

If a farm boy from a desert planet, filled with naivete and innocence, armed with a sense of what’s right and wrong can achieve glory, then maybe, so can the rest of us?

Pick of the Week: Star Wars #6