Fear can be so powerful but it can also be a subtle influencer. The little, every-day fears in our lives can be pervasive and persuasive in our lives and decision-making. It’s the subtle type of choice-affecting fear that guides our emotions and actions that drives characters or even us that we are going to look at for this week’s theme.

Let’s get to the list and suss out those regular fears. 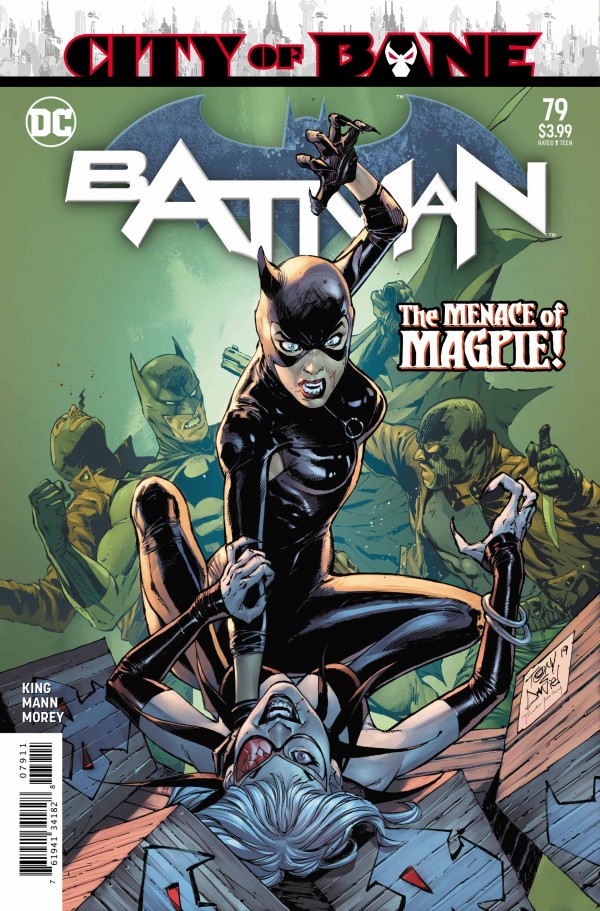 What does Batman fear? Well, this is a question that has been asked and explored many times in the history of Batman comics. His interactions with the Scarecrow, exposure to different Joker toxins and of course, his many visits to Arkham Asylum have been only some of the Batman’s encounters with fear.

But this is Tom King’s Batman. As much as no writer who works for DC Comics can lay claim to ownership of the character, there is a particular style of presenting the character that each writer can be known for. In King’s case, this Batman actually does have a fear that is undisputedly more pronounced than any chemical or nerve agent can induce. This is a more common one and it’s probably more relatable because it’s a typical fear that we all have.

The loss of our family.

King has shattered the solitary nature of the Batman and despite his membership in many organizations, the grim, isolated demeanor of the Dark Knight is an expected one in many stories. His relationship to those who care about him is usually presented to us as one-sided. While the reader knows that the Batman does care about them, he tends not to show it as it would indicate weakness.

That, however, is the crux of this story arc. King presents Batman’s isolation as the source of his fear and it’s the return of Catwoman (after the brutal debacle of the wedding) that will nurse him back to full strength. Their reaffirmed love for each other promises a shot at success in his return to reclaim Gotham from his father (you know, the one he never knew?) and the only villain who has ever had the claim to have really decisively beaten the Batman in the past: Bane. They both beat him when he was alone, because the Batman can’t bring himself to risk those he loves.

In this case, he doesn’t know that Alfred is dead, his son is captured and the thought of their safety and the return of Selena to his side gives him renewed confidence and removes his fear.

Of course, King is capitalizing on the fact that we know this, and so the beauty of the story will be when Batman eventually discovers that, and realizes his greatest fear.

I can very easily see King extrapolating this to be Batman’s fear. After all, he’s a veteran – he understands placing yourself in harm’s way. There’s no way he’d ever want the same fate for his loved ones.

The art is spectacular in this book. Clay Mann provides an absolutely stunning interpretation of Selina Kyle that is to be seen. She’s a wonderful counterpoint to Tony Daniel’s cover in that while Mann manages to capture her gentleness (even in combat, she is sleek and deadly), Daniel’s version of Catwoman presents her ferocity. They’re both gorgeous representations of this essential Batman partner, but I have to say, based on what King has done so far? I fear for her safety.

… Just gonna leave that there. 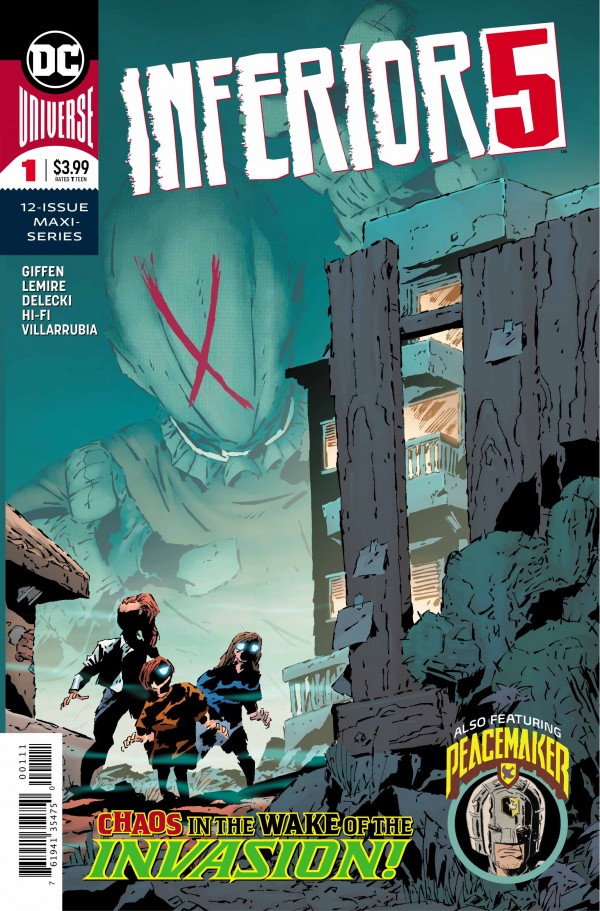 There are lots of themes in this decidedly odd renewal of the title of the formerly funny-book from the late seventies and early eighties. The Inferior Five were the oddball offspring of established heroes in an alternate Earth. They were essentially comic-relief and this book from Jeff Lemire and Keith Giffen is nowhere near that level of story, and aside from the title, it has nothing in common with that title.

Lemire is known for his strange perspectives. A shy guy by nature, his work stands out more than he does – by his own choice, of course. This isn’t a bad thing, but it does denote some sense of insecurity that makes him a good choice for writing this story.

The aftermath of the Dominator Invasion has caused a great deal of migration from Metropolis into the American Hinterland where people can feel that they are safer. They are afraid of the larger, urban centres because that’s where the greatest threats seem to occur.

That’s the case with young Justin and his mother. They have relocated to Dangerfield, Arizona, a dilapidated town literally on the edge of both nowhere and failing apart. Justin’s father was a casualty of the Invasion, but there is definitely an aura of mystery about the town and some of the characters we meet throughout the course of the story.

There are other things going on that are of a fearful nature: a strange scientist who has an even stranger hooded boy who communicates only through the endless recitation of a poem about the kittens who have lost their mittens. There is a comic store owner who bleeds a lot, a stunted and acerbic comic reader who has a companion with a choice of syntax that is also highly suspicious. With Theresa and her erstwhile would-be stalker in tow, the question I have is: who are the Inferior Five here, because there definitely seems to be no shortage of choices? Sad, that it doesn’t get revealed in this issue and while we get brief introductions to these characters, I can say that I’m curious.

Of course, curiosity killed the cat, right? Maybe I should be a little more scared.

Logan fears the consequences his death may bring to those he feels responsible for in the twisted carcass of a world where he is from and the villains won.

Henderson does his level best to portray a dried up and desiccated Earth in which everything can go wrong and fear runs amok. It’s definitely a fearful place.

Ed Brisson and Mike Henderson understand this. But they also know that this character has to finish next issue, so while Logan’s walking around on borrowed time he has to take care of his affairs.

Even though you know that the time on this guy is done, it’s been a hell of a ride. Still, Logan has gone to alternate past, saved his friends there and now he has to return to the time he came from and rescue Dani Cage and Bruce from Sabretooth, Mr. Sinister and all their minions. Outnumbered, outgunned and definitely out of options, the thing to look forward to is how will Logan end?

You see, that’s the great fear here. Will Henderson and Brisson come up with a death that’s worthy of this hero? It doesn’t look like one is expected when you start reading, but by the time you get to the end of this issue – well, let’s just say that it looks there’s a Hel of a great time in store for the final issue and I’m really looking forward to it. 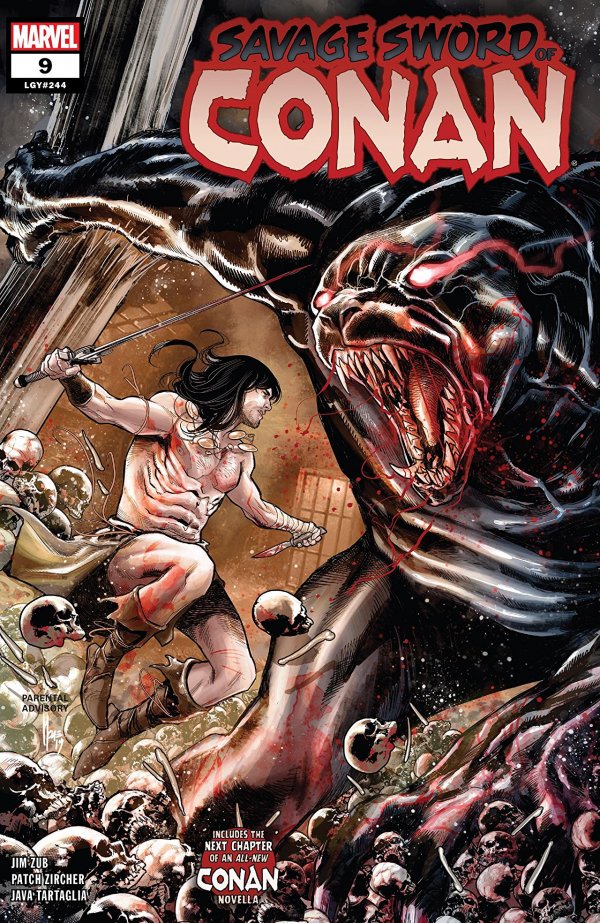 Conan never knows fear and don’t we all wish we could be more like him?

Swords and sorcery are really Jim Zub’s thing in this tale of Conan overcoming a gambling den with that which always sees him through: his powerful sword arm and an indomitable spirit.

Regardless of the odds, it’s kill-or-be-killed and Conan always overcomes his opposition with this attitude. He accepts death willingly and it’s this acceptance that frees his mind of fear and allows him to devote his complete attention to survival. It’s a simple premise but it’s one that never fails to disappoint and that Jim Zub has fully mastered.

After being thrown into the pit of the gambling den (known as the “Debtor’s Lounge”), Conan faces a great beast and needs to fight for his life. Of course, while the gamblers watch from overhead, calculating the odds and betting on how long Conan has left to live, they don’t understand that there is a bigger game being played, with their lives as the spoils.

I can’t help but always be entranced and entertained by a Conan story. Of course, Patch Zircher’s work on this book is completely mesmerizing. He not only creates a terrifying monster for Conan to face, but he draws a Conan with a ferocity to match.

Just an awesome book to enjoy. 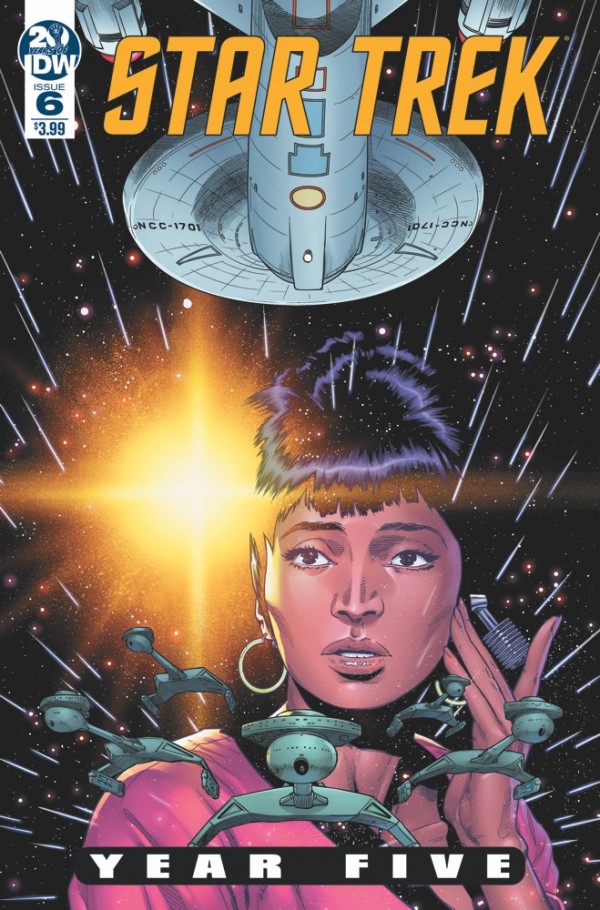 Then, there’s the great adventure – Space, the final frontier. I always worry about how my favourite franchise will be treated whenever I see a new comic version of it appear. However, in this case, Jody Houser and Silvia Califano have put my fears to rest.

First off, Houser has really captured the spirit of these characters with her stunningly accurate portrayal of Lieutenant Uhura, and her adherence to the canon of this character’s talents and skills have clearly demonstrated that she is a writer who knows her stuff. Uhura is more than just a glorified receptionist; she’s a musician, mathematician, a linguist, an electronic surveillance and warfare expert who also knows standard greeting protocol for various alien species. Now, I could go into where all of this is revealed, but that’s an intense list of novels and other media sources. So, take it from me, in the fifty-odd years this character has been around, she’s got some serious chops and Houser effectively presents that to us in this book.

The story so far: the final year of the Enterprise’s Five-Year Mission sees the Captain and Crew suffering the effects of an archeological artifact brought back from a dying planet. Unable to screen their thoughts and saying what they really want to say, the crew has gained the ability to hear each other’s thoughts preventing them from communicating properly. Also, there is a refugee Tholian child aboard the ship they need to understand. Uhura is essential to both of these plotlines and Houser weaves them into each other in a way that is not just entertaining, but pure Trek.

But it’s the Tholian child’s fear that really gets to me in this story too. In fact, there’s a moment in which the child experiences a moment of happiness in that he has managed to please Uhura. In that moment, all fears and insecurities this poor alien refugee child may have are all washed away by a feeling of acceptance. It’s such a kid thing to do and it instantly connects the reader to this character.

I am also loving Silvia Califano’s work. She has a real gift in allowing these characters a freedom of emotional expression. Her likenesses of the characters (as we know them from The Original Series) is fairly spot-on and her depictions of the USS Enterprise and a proto-version of a Klingon Bird-of-Prey are also thoroughly enjoyable – and I’m saying that as a guy named Kirk.

In short, my fears about the quality of this Star Trek story have been fully allayed. What you fear shouldn’t get in the way of what you love. Houser and Califano have taken on a daunting task to present this franchise in the way it needs to be seen, and they have risen to the challenge done it due justice.

Star Trek: Year Five #6 is the pick of the week for this week’s list. It’s duly deserved.

No fears this week, okay? Have a good one.