If there’s anything that brings me a sense of relief in the world, it’s a sense of trust. The knowledge that I can rely on someone who’s “got my back” fortifies my resolve to push on. I mean, we all need friends, right? But more importantly, we need to know we can count on those friends.

Those are qualities that resonate strongly in stories, particularly comics. It’s not only the text that informs you about the nature of the friends in the story, but you get to see artists’ renditions of what that trust looks like. I can’t help but notice when I’m reading comics. So, for this week, I’m looking at books that give me that sense of reliance. Skill, talent, reputation – whatever form it takes, that’s the criteria for this week. Let’s get to the list. 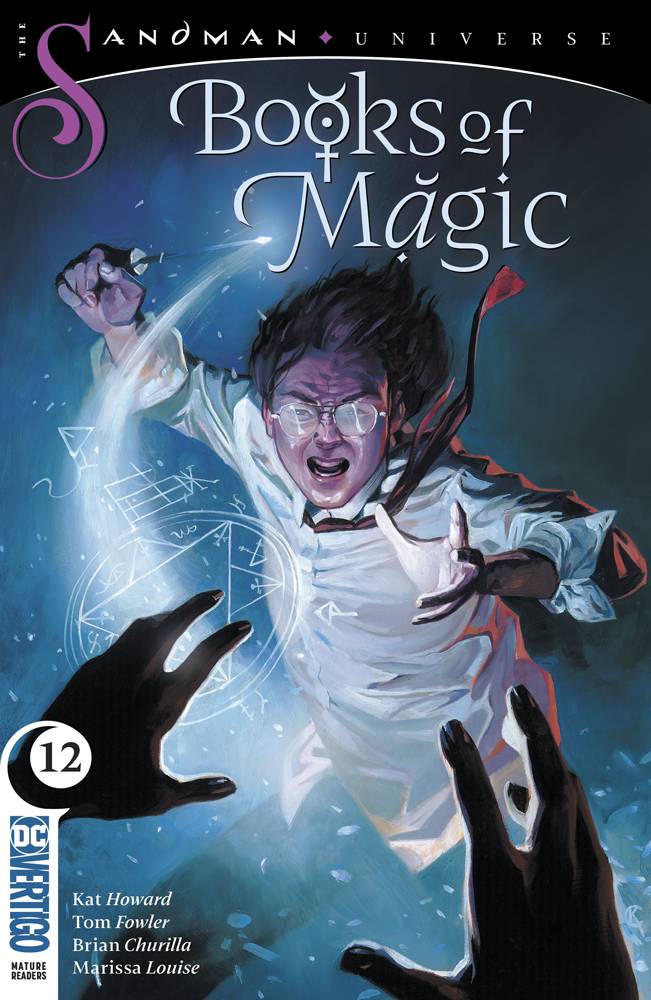 Magic is essentially unreliable, but that’s what makes it entertaining, am I right? But it’s a roller coaster and hardly a source of comfort for me – or for poor Tim Hunter, who is isolated, alone and whose sense of trust is in tatters and shreds in this issue.

Magic has essentially been the bane of Tim’s happiness. Not only has it ruined his family, isolated him but it has also placed on his shoulders an immense responsibility to know how to use it correctly, never mind how to simply use it.

We clearly see that struggle in this work from Kat Howard and Tom Fowler.

Tim is a neophyte magician. He understands the basics of his power but he still has to refine his abilities as well as knowing the right time to use them. In that respect, he’s not that much different from a regular kid, making decisions how to act in given situations. Most of the times, kids have responsible adults or authority figures they can look to for guidance and judgement. Tim doesn’t have that comfort.

In fact, Tim has just lost faith in one of these teachers and has decided to go it alone. That’s a brutally lonely and insecure state of being. This is probably one of the most poignant issues in this story so far, and while we don’t know what Tim is going to do next, we know that whatever his next steps are, they’re going to be on his own. Tom Fowler, Brian Churilla and Craig Taillefer manage to successfully show us the resolve in Tim’s expression. It’s a look of grim determination that even though he knows nothing, he believed he knows enough to set things to right.

It’s a powerful image and this book manages to convey Tim’s frustration. Decisions made while in that mindset are often memorable and dramatic – excellent material for the rest of the story to unfold. 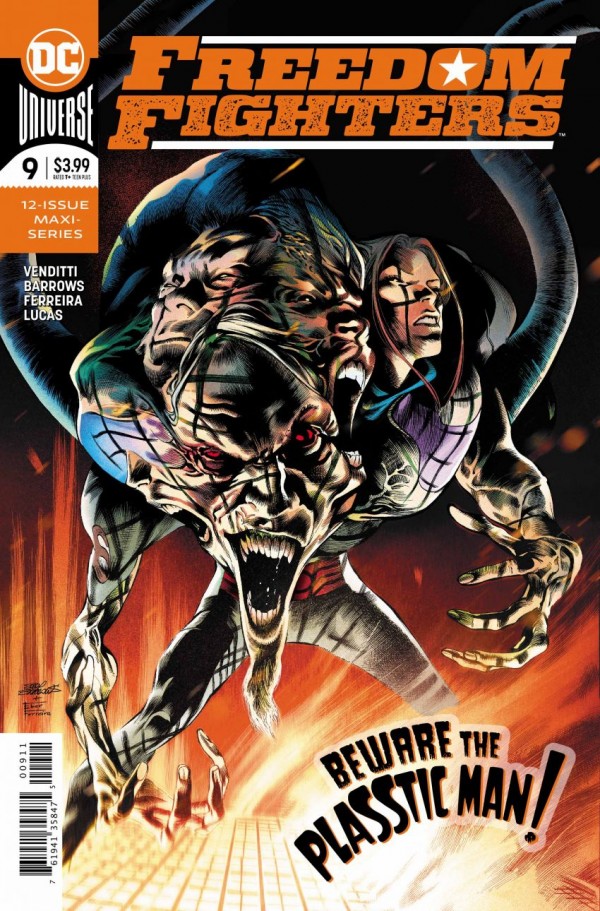 We can trust in values – as long as they are upheld. But what about when your country and your leaders faily to uphold the values that your nation is supposed to stand for? That’s the twisted version of America that Robert Venditti and Eddy Barrows have presented to us in this dynamic issue of the 12-issue mini-series.

I think I’ve said this before, but I don’t think that twelve issues will be long enough to deliver this story.

Black Condor is the focal point in this part of the story. Fueled by rage and the need to liberate his fellow workers in the labour city of Detroit. The Human Bomb is captured and tortured by the Nazis and the rest of the Freedom Fighters are in position, waiting for the right moment to strike.

This is a bit of a lull issue. While Black Condor’s wrath is definitely well-deserved, and his battle with this world’s version of the Plastic Man is a worthy one, there has to be a pause for the Freedom Fighters to gather their strength for the decisive battle to come.

Of course, I can’t see them bringing down the entire New Reich in two issues, but something dramatic is bound to happen that will clearly validate not only this team but the values they stand for. Hopefully the next two issues will give us something like that. 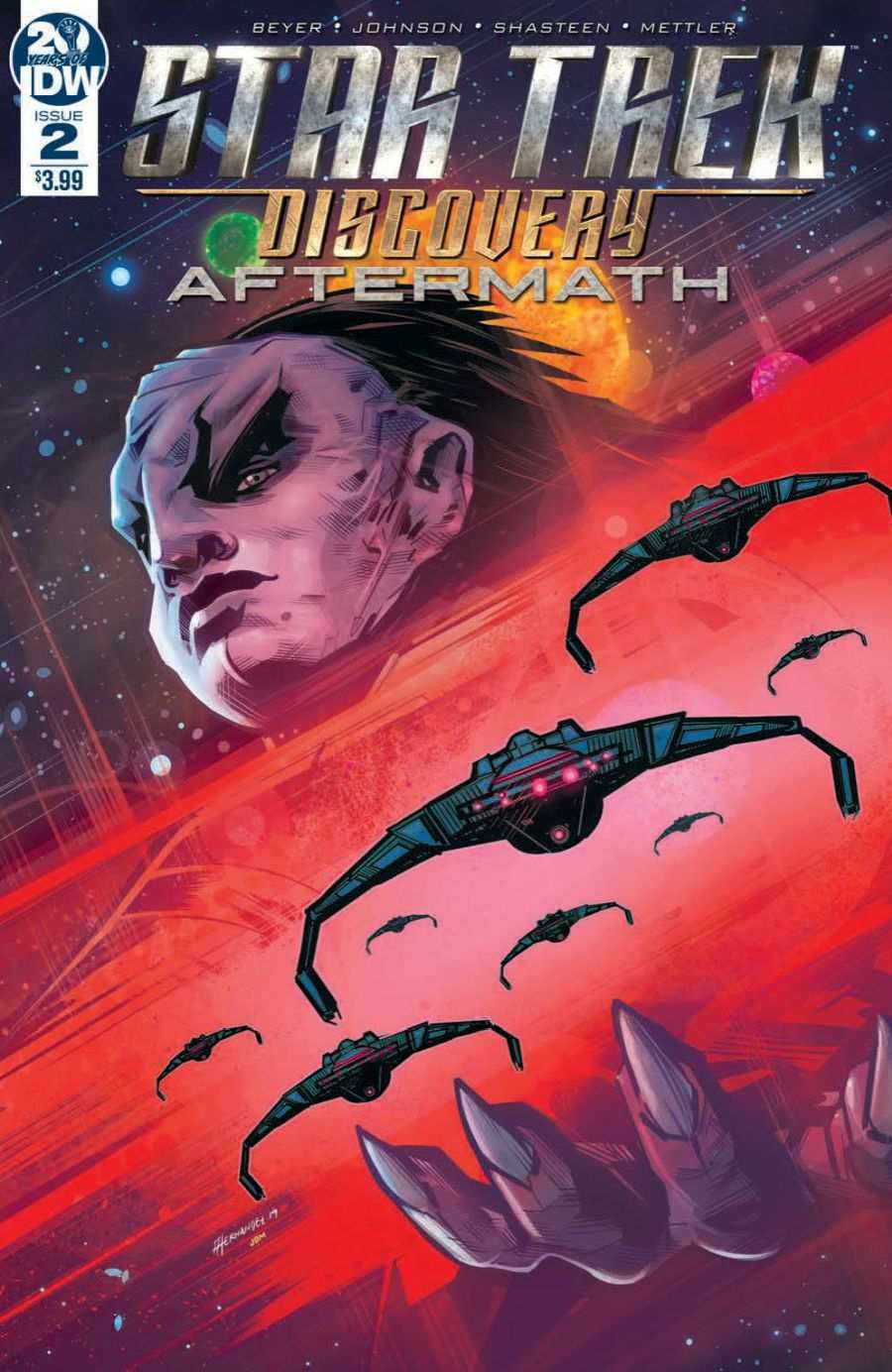 Star Trek is my usual source of reliable entertainment. Though Discovery is a new format that challenges the way I enjoy my favourite franchise, I have to say that I am gratified to see new interpretations of characters who I am enjoying meeting again – for the first time.

It is odd though, how this book, written by Mike Johnson and Kirsten Beyer actually makes for a better episode of Discovery than what I’ve seen in the last two seasons. I mean, there have been episodes that have entertained me, but not in the way that I’m used to in watching Star Trek. I find this wholly ironic.

Drawn by inestimable Tony Shasteen, this is definitely the best Discovery story I’ve read. It’s about a premise that’s fairly essential to the fabric of Star Trek – relations between the Klingon Empire and the Federation. What people need to know though, is that if you follow the history of the series, this diplomatic session between the Empire and the Federation is doomed to failure until the Organian Treaty in TOS.

So, I can enjoy this, knowing that there is a nod to continuity in this story and that it promises to bring back closer into the fold of the established history of the series.

Ragnarok: The Breaking of Helheim #2

If there’s anything you can rely on Walt Simonson for, it’s quality storytelling, but I’d be remiss if I didn’t mention the superb art stylings of this master creator. When it comes to Simonson’s love of Norse mythology, then there’s nothing more that guides his hand in his work than his passion for it. There’s a sense of that in the characters’ dialogue.

For example, in this post-apocalyptic version of the Nine Realms, Thor’s speech isn’t in the form of the affected 16th century speech adopted by Marvel in the 1960’s. While this maybe an accepted convention of describing a mythological figure, it doesn’t really describe Simonson’s creation. This isn’t lost on the reader who gets a sense of Simonson’s voice in the story.

Of course, the letters column is an underrated feature that shouldn’t go unnoticed. After all, this isn’t just the editor writing back to the fans, it’s Walt. To me, this says volumes about the sense of ownership that Simonson takes and communicates back to the fans. This resonates with the readers who get caught up in the story along with him, as one can discern from reading their letters.

This is a personal love for Simonson and I respect it. I take a great deal of comfort from Simonson’s reliability as a storyteller. 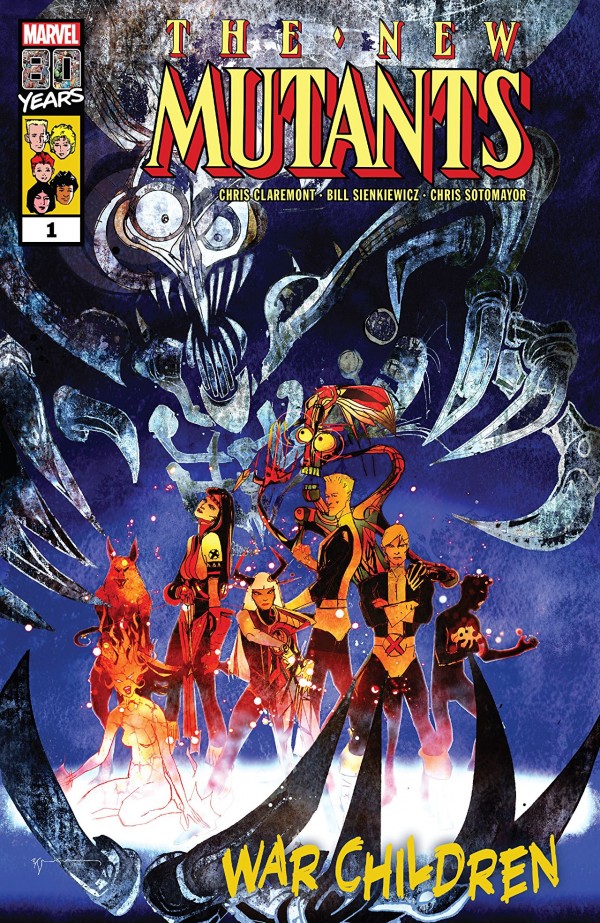 A one-shot return to the era of the New Mutants and X-Men that I not only remember but was my reliable “go-to” for comic reading enjoyment.

The original New Mutants had a cadence that resonated well with its audience. Chris Claremont seemed to have an uncanny (no joke intended) ability in portraying completely relatable teens and placing them in situations where they made decisions that other kids their age could get.

I grew up with the New Mutants – they were my age, and to have mutant powers is the ultimate wish-fulfillment of my “golden comic-reading era”.

Before I mire myself in the comforting warmth of nostalgia, I know that things can’t always stay the same, and sometimes growth is unnaturally painful; we recoil from it. But these were the mutants I remember and these New Mutants were the ones that I related to the most because they were my age and when I was that age, I remember imagining myself doing exactly what these characters would have done if I were in those situations. That’s how closely I identified with these characters.

Bill Sienkiewicz’s work and I had a more complicated relationship. It was jarring and while I’ve had the chance to talk to Bill about this, at the time, I didn’t feel it was the art for me. However, what I also didn’t realize was how much of a New Mutants expert it made me. Because I had to literally study the comic to understand what Bill was doing, it made me a better reader.

Chris Claremont has always praised artists for their ability to envision what he wrote, but in this case, it was Bill Sienkiewicz’s art that made me pay attention to the characters and their relationships to each other more.

I think I miss that the most. Never have I had such an intimate reading experience with a comic than I did with the New Mutants – and I have both Bill and Chris to thank for that.

This is a Warlock story, that centres on the alien’s eventual destiny to face his sire, the Magus and essentially kill his friends in the wake of that battle.

It’s a typical storyline, but it’s the quintessence of this book at the height of its popularity. Doug and Warlock were the “Team Supreme”, but all of the close relationships are mentioned in this book and that’s what stirred the nostalgic memories for me. Dani and Rahne, Sam and Roberto, but there was also a mention of Sam’s extra-galactic teleporting girlfriend rocker, Lila Cheney and even Kitty and Lockheed make a much-welcomed return to the team. My favourite character – Illyana, my Magik is with them too.

This book was not just a stroll through memory lane, it was a perfect original story from that era that shows that more of them could be possible. Yes, this was only a one-shot, but it was a reminder of all those great relationships and a reliable comic that |I could lose myself in every month. Hell, I even became somewhat of an expert in both Claremont and Sienkiewicz’s works. I knew them and I could always trust in what I was getting for my money.

There is a relationship that develops between creators and audience. It’s an implied one, to be sure, but it’s evident, nonetheless. A dedicated reader becomes familiar with the story presentation, the consistent values a creator carries over from previous works, but more importantly the reader knows what type of story he or she is getting. There is a trust there and it’s a valued one, to be sure. In my case, it’s lasted for almost forty years.

To this day I have my complete run of this series intact and from those original days. Despite multiple moves and even a house fire, they have managed to survive and, in my comic closet, a few feet away as I write this.

The New Mutants #1 one-shot is my comic pick of the week. It reminds me of that time but it also restores a love of what I took from my comics experience in my youth. For that alone, I’m grateful, but it’s also a reinforcement of the values that I looked for: reliability and most importantly, trust.

Thanks Bill and Chris – I’ve always trusted you for great storytelling.

I trust everyone will have a great week. Until next time.

Pick of the Week: New Mutants #1