None of the comics I’m currently reading are represented at this year’s Fan Expo in Toronto.

This is a late post, I have to apologize to my loyal readers. As I mentioned in last week’s review, it’s comic season for all Toronto’s – and Canada’s, for that matter – largest nerd culture event and I’m really disappointed to look at my pull list and not see any of the artists or writers in attendance.

Now, I like to think that I pick a fairly eclectic arrangement of titles to appeal to a variety of my readers and make or an interesting and current collection of talent, but for some reason, they don’t make Fan Expo’s comic guest list.

For example, Lazarus is probably the best comic out there on the market. This week’s issue had my fingernails in shreds and is wonderfully put together. Why wasn’t Greg Rucka or Michael Lark invited? In terms of what’s hot, We Stand on Guard by Brian K. Vaughn and Steve Skroce would fit well a con in Canada’s largest city. Could you imagine the questions in a panel about American military superiority in the face of Canadian obstinacy? That would be a heated panel, for sure!

Image Comics doesn’t even have a presence here in Canada’s largest comic show – heck, neither does Marvel, DC or Dark Horse. Where are the booths? C.B. Cebulski is here from Marvel Comics looking over portfolios for an hour or so, but it’s clear that the comics side of the show is definitely under-represented. Maybe it’s an internal staffing thing or maybe it’s because Fan Expo has moved away from just comics and has embraced a wider perspective by incorporating celebrities, horror, gaming and merchandise.

One artist I’m planning on meeting is John Cassaday. I’m lugging my Absolute Edition of Planetary along with my omnibus edition of Amazing X-Men to get signed. Cassaday is knocking stuff out of the park with his work on Marvel’s Star Wars comics and he’s probably the biggest talent at the show this year.

In any event, at least you can pick up some amazing comic deals at the show. There’s a really good range of comic vendors who are just itching to unload their stuff. If there is anything that’s well-represented at the show, it’s the comic-sellers. I managed to pick up some pretty good deals on hardcovers offered at US price with some sellers offering to discount their books even further. For a comic junkie, that’s pure heaven.

However, before I digress even further, let’s talk about the reviewed title for this week, shall we?

We Stand on Guard #3 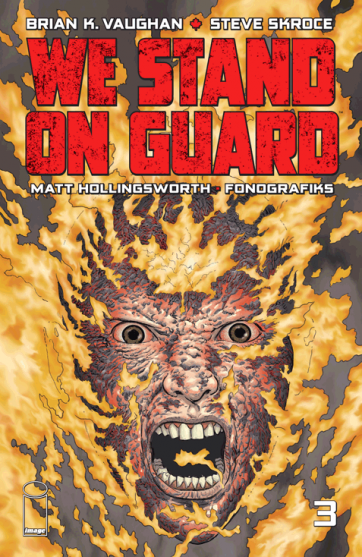 When this title initially came out, it was in a spirit of camaraderie and mutual respect for our two great nations.

This book just got dark.

It’s surprising how fast it went, even though I shouldn’t be; it is a military title, after all. But I think the first two issues, loaded to the maple branches with Canadiana and familiar scenes of Northern geography, set us up for the sucker punch of American military resolve. There’s an interrogation scene in this book that’s could have been a futuristic version of Guantanamo Bay.

I like this story, but I have a feeling that things are going to get really black and bleak in the next few issues. If this is the type of story you enjoy, then this is the book for you. 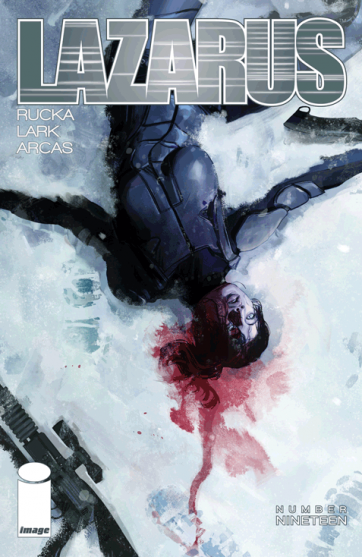 Man oh man! I cannot adequately express how great this comic is! Not only were we left in complete suspense at the end of last issue, but Greg Rucka manages to extend that suspense with a really advanced combination of medical science fiction and character development! I can’t go into the specifics of how he does that without unleashing spoilers, but this is such a great issue, you’ll just have to trust me! But just look at the cover: an open-eyed and dead Forever Carlyle lying on the snow surrounded by blood. 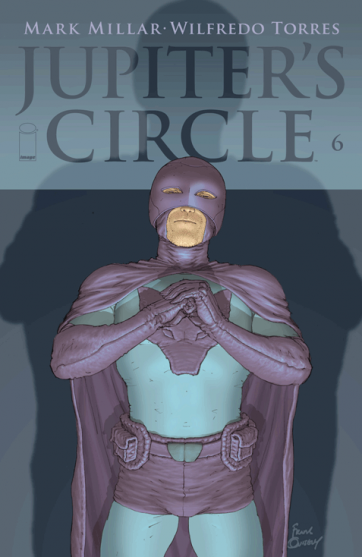 For the last five issues it’s been easy to forget that this comic is actually the pre-cursor to Jupiter’s Legacy. The storylines in themselves have been about the juxtaposition of 1950’s social morality and the fact that it doesn’t apply to metahumans of that time period. It’s a more grittier look at the golden age of super-heroes than what readers would expect.

I’ve enjoyed this title immensely and in this issue we start to see the beginning of the split between the Utopian and his brother. The relationships are what makes this comic succeed – it’s hardly the super heroics or the battles with villains. This is a true drama and is very powerful storytelling. 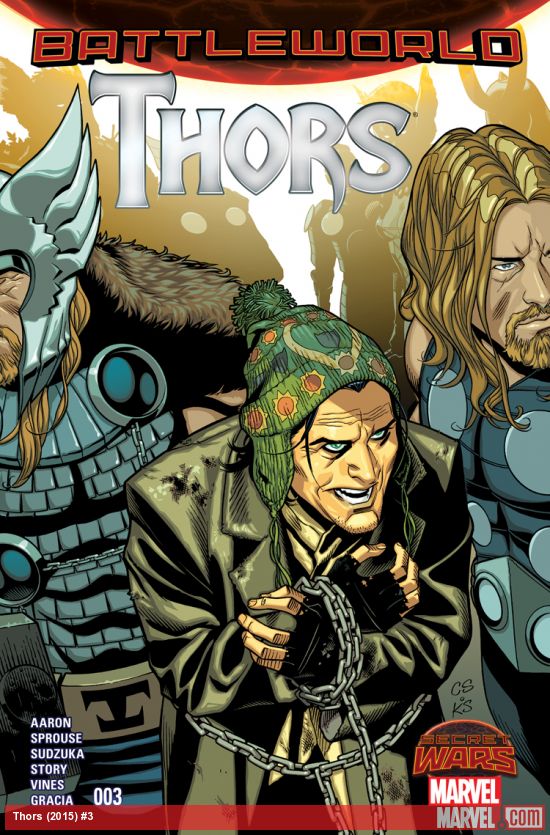 Like I mentioned a couple of weeks ago, this is a comic that really took me by surprise. Even if I’m not completely sold on the whole Battleworld premise, at least it gives writers a chance to experiment with new ways of presenting Marvel’s pantheon of characters. This is one of those opportunities.

The fact that it’s drawn by Chris Sprouse is nothing short of exciting. He is a phenomenal talent and definitely the type of meticulous and detail-driven guy you want drawing your book. Jason Aaron must love having this guy on his team because if there’s a way Aaron wants anything presented, Sprouse is the guy who will make sure it’s all there.

If you’re not familiar with the premise, in the Battleworld, all the versions of Thor are in fact the law-enforcement tool that Doom uses to keep peace in the fractured Battleworld. They have leave to cross between realms and are allowed to see the various forms of our familiar characters from the Marvel Multi-verse. This is where you need a detail-driven artist like Sprouse to keep everything together.

In fact, there’s a beautiful two-page spread of Ultimate Thor interrogating Loki the Homeless that really captures the spirit of this cop-drama book. The twist at the end of this issue is perfect – Aaron knows how to write a crime drama that’s for sure. This is one of the Secret Wars issues that I’m enjoying immensely. 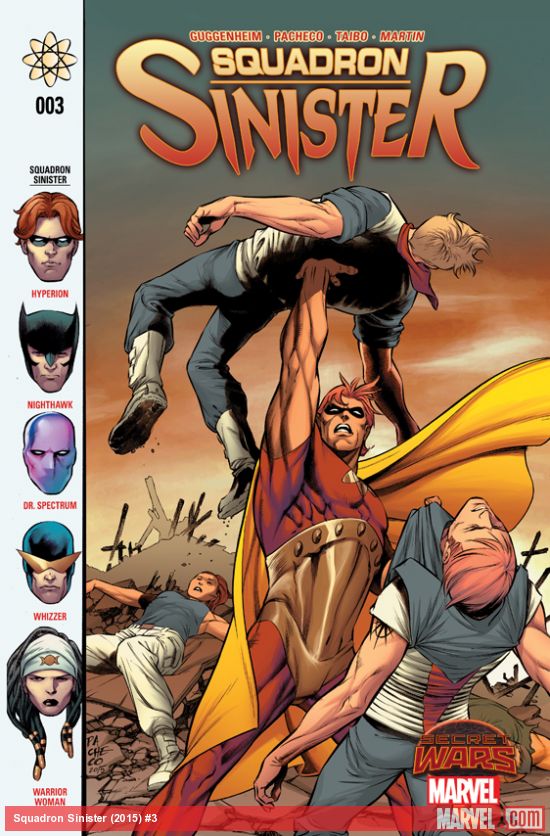 After an awkward start, this has gotten better. Now that all the pieces of Nighthawk’s plan are starting to come together, the details and intrigue of his plan are unfolding for what will eventually become his gambit for power. It’s a little formulaic but the fun of this book will be in discovering the outcome. Remember that the Squadron Sinister is Marvel’s version of the Justice League, so it’s pretty cool seeing this version of the JLA actually take over a country and go to war with other nations. But that’s Battleworld for you, am I right? 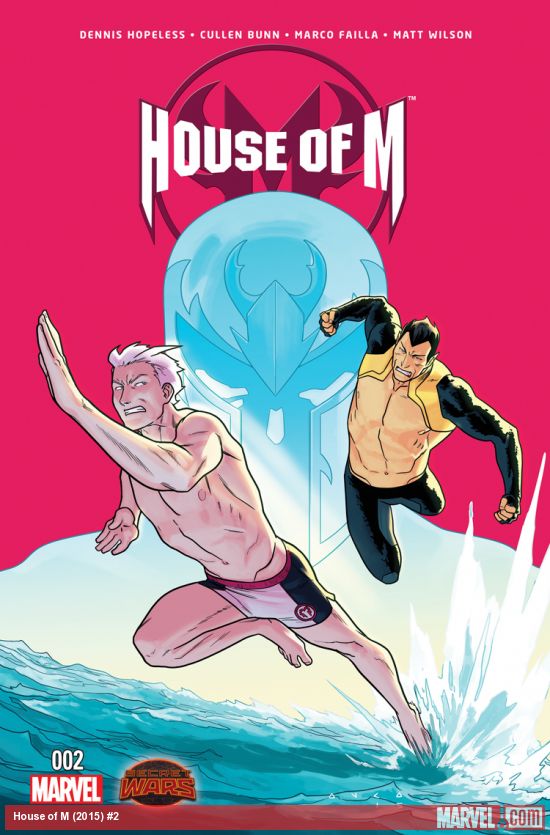 I’m not a fan of Dennis Hopeless’s art but Cullen Bunn manages to create a workable story out of this premise. In this realm, Magneto’s House of M dynasty is the dominant power with a human resistance as the only threat to its rule.

It’s a fairly uninspired storyline. I’m not overly impressed as there was a lot more that could have been done with this scenario. The House of M shouldn’t be ruled by a tired despot looking for a greater challenge when there are dozens of other realms he could be taking. If Magneto is bored, then give him a challenge.

Granted, this is only Issue #2 and there are further developments that will definitely add to Magnus’s challenges, but this is a book that could have been tied into Doom’s artificial god-like status and how he is keeping the truth of the universe’s creation from his subjects – which is what’s happening in Thors.

The comic choice for this week has to go to Lazarus #19.

This book consistently presents a great story every month and is the best one on the market. Why Image isn’t promoting more  of it is beyond me, but it is assuredly their best title and needs more noise! It has everything: suspense, super-heroics, human drama and a science fiction setting that is completely believable and grimly foretelling. This is a book that does more than entertain; it is a book you believe.

This is also a book whose creators need to be at Fan Expo.

So that’s it for this week. Again – my apologies for the lateness but the world of Fan Expo awaits and with any luck, some great comic stuff will happen that I’ll be able to share next week! For now, go buy some comics!