There are some moments at comic conventions that completely go unappreciated and overlooked.

Fan Expo Canada was like that. While there were some things that didn’t work out for me this past weekend, there were still some moments that were priceless and memorable and needed to recognized. I was actually speaking to Adam Kubert about this idea and he shared a special con moment with me.

He told me that there was a street that he walks down to get to the con from the hotel that he and his dad, Joe, walked down. Walking down it this weekend brought memories of his father to his mind.

My family had a special moment with Joe, Adam and Andy Kubert when they were all here back in 2011. My daughter was the Media Ambassador who drew the winning ticket for a draw that benefited Sick Kids Hospital and it created such a series of cool memories for my daughter, me and the Kuberts.

But there were other moments too. I re-connected with pals like Greg Capullo and Tom King; I met Anthony Head from Buffy the Vampire Slayer who sent a personal message to my kid. I saw comedy troupes like the Dandies and the Frantics perform, who I’ve have personal connections with and the fact that they were there and I had some relationship with them, gave me a sense of personal satisfaction.

Cons create moments for the regular fan to meet an idol; an actor who changed their life with a performance or a writer who created a story that had some sort of personal significance for this fan. But then, the fan gets to express that importance – these are all moments that matter and get taken for granted.

It’s easy to get mired in the frustration of being stuck in a line, paying an over-priced amount of money for a slice of pizza or the rampant commercialism of vendors trying desperately to offload an over-abundance of wares for a quick buck, we forget that there are moments of real humanity that happen at these events.

I still remember the time when William Shatner hugged my little girl; even he didn’t realize how special she was at the time. But he was decent to her and it turned into an event that defied belief.

I have gotten great interviews at these events as well. And while I am sometimes stunned by the level proximity and honesty these celebrities have been willing to surrender, I am also grateful to them for the newsworthiness and candid trust they have shared with me. To this day, interviewing Jonathan Frakes is still a memory that I cherish.

Comic Conventions have been accused of not being about comics any more, but that’s not my experience, particularly when I meet stellar artists like John Bolton, Jae Lee, Greg Capullo or wildly imaginative writers like Tom King or Scott Snyder.

Comics are the lens piece in which all these other fandoms are perceived and are compared.

Let’s get to the list of worthy contenders for this week: 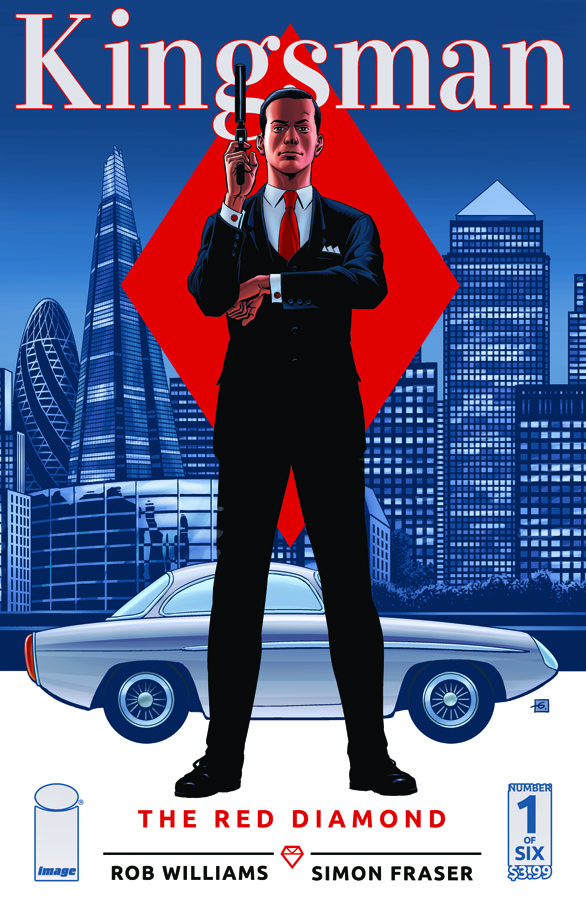 It’s a short list but in no way does that undermine the choice of Kingsman: The Red Diamond #1 as the worthy recipient of our coveted Pick of the Week status for this time around.

You see, it’s about moments and this book is filled with many. First, there’s the idea that Eggsy, despite his sterling espionage skills, is still not really one of the Kingsmen. These are upper-class agents of Queen & Country who represent extreme breeding, privilege and that’s not Eggsy – or is it? What’s really captivating in this story by Rob Williams and drawn by Simon Fraser are the moments when he doesn’t fit into the world he came from and the world he now inhabits.

I also love the moments in this book that remind me of my homeland. Though I have lived in Canada for umpteen years, I still have solid memories of my British upbringing. Regardless of where I call my home, I still feel that British cultural attachment and I remember the fixtures, despite my small-town origins – that Eggsy calls native. The pub, the attachment to the Royal family (though I have to confess that Rob Williams took a bit of liberty with the personality of the Duke of Edinburgh – yeah, I’m a Royalist) and the fact that Britain still holds enormous influence in the world political arena. There were a great many aspects of the British Empire at play in this story that successfully twanged the heartstrings for my place of birth.

But there are also the moments we don’t see. Especially the one in which the decision was made for Mark Millar and Dave Gibbons to give up writing and drawing this comic to Rob Williams and Simon Fraser. Though they acquit themselves admirably, that must have been a moment in itself.

I tend to look for the things that people take for granted. There’s meaning and significance in the moments that pass us by. That’s what I enjoy finding and there is no difference in the world of comics.

Make sure you watch for those moments too.