Okay … Fan Expo is done and while I enjoyed myself immensely, there were very few comic memories that I will take with me from this year.

You need representative samples of two things for a successful comic guest list at a con: established artists with a long history who aren’t out to make a quick buck off their signatures, and dynamic new talent that has taken the comic world by storm. If you don’t have at least four or five guests from each one of these groups, then then you’ve got an issue.

You also have to have a reputation for hospitality for taking care of your guests. Provide them with food and water at the booth so that they can interact longer with their fans. Escort them wherever they need to go so that they don’t get swarmed and make sure they have a place where they can cool off and recharge. If they have companions, make sure they are taken care of as well.

But it’s important to think about the fans as well. Why are artists charging $30 for signatures? I get that you want to dissuade the collectors, but think about the amount of books fans have in their hands. I mean, if you’re a famous artist and a kid comes up to one of these established, historical figures and asks for one book to be signed, does it look good on the con that it’s going to cost that teenager $30 for an autograph?

Also, don’t stack your comic guests far away, against a wall with limited row space for fans to access? The aspiring artists need to be in proximity to the comic guests, but not too close to prevent them from being seen. Also, it’s important to remember that aspiring artists are exactly that: aspiring. They haven’t made it yet, and they are trying to establish a career but they’re not in the same league … yet. You have to keep them separated.

However, what I will say, is that while there were some issues at Fan Expo this year, it didn’t get in the way of great happenings like commissions from guys like Anthony Marques and Jae Lee. Oh, if you get a chance, check out Anthony’s work on IDW’s Borderlands. Also, take a look at Anthony’s homage to George Perez’s Starfire of the New Teen Titans. Just amazing stuff. 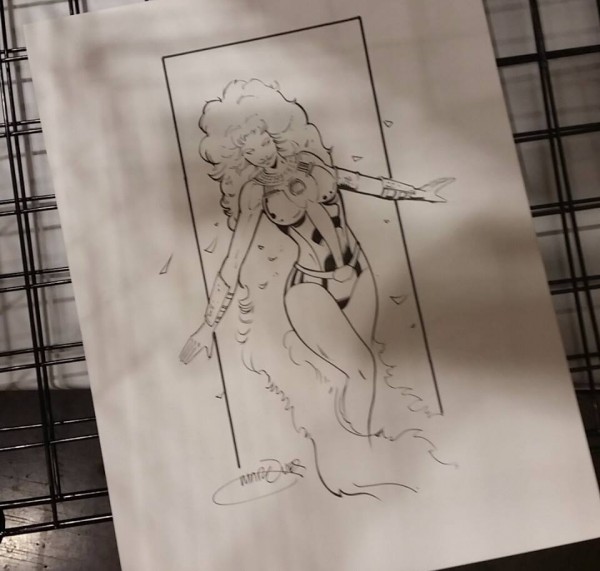 In any event, it was a busy few days of running around and meeting and interviewing celebrities. Lots of responsibilities to meet! But, I’m beat and I’m just looking forward to reading a few comics so let’s get to the list. 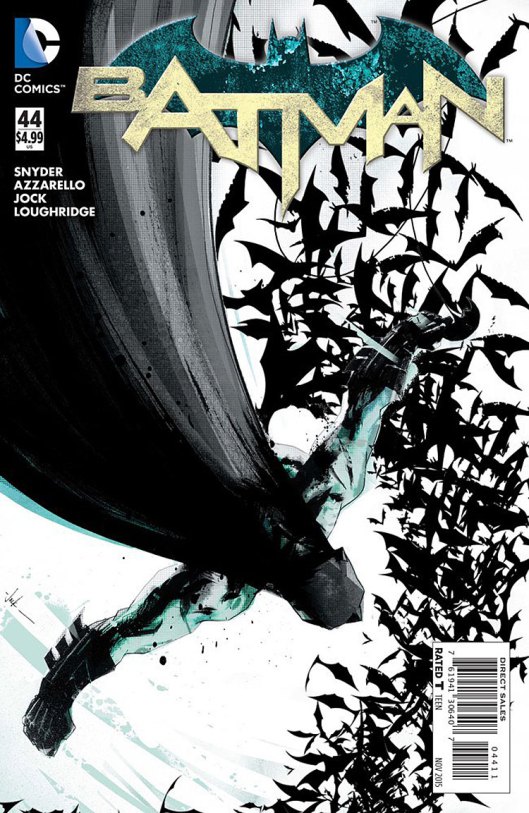 First off, I’m not a fan of Jock’s art. Snyder and Jock work well together in terms of pacing, but the over-used darks are just really boring for the eye to read. The assist from Brian Azzarello is interesting and the story has many hallmarks of Azzarello’s style – the staccato-like narrative and the retrospective type of storytelling, but in the end this was a different comic what I’ve been used to in Batman recently.

It wasn’t bad, and it was good to see Bruce Wayne back as Batman, as this tale happens in the past, but it definitely wasn’t Snyder’s usual, that’s for sure. 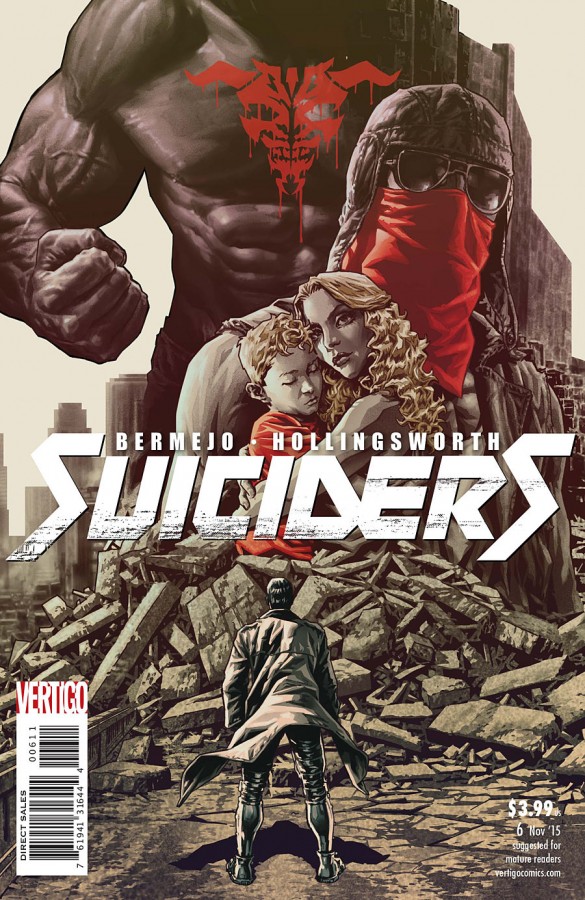 It’s been a while … I’ve missed this book. It’s staggering to think that Bermejo carries this book – writing, art – interior and exterior. It’s a rare talent indeed.

Issue #6 finishes the current story arc. I’m desperately curious to see where Bermejo is going to take it from here – I’d like to see more of the workings of the professional gladiator system in addition to more of the dystopian future he’s presented. This book is far from done. 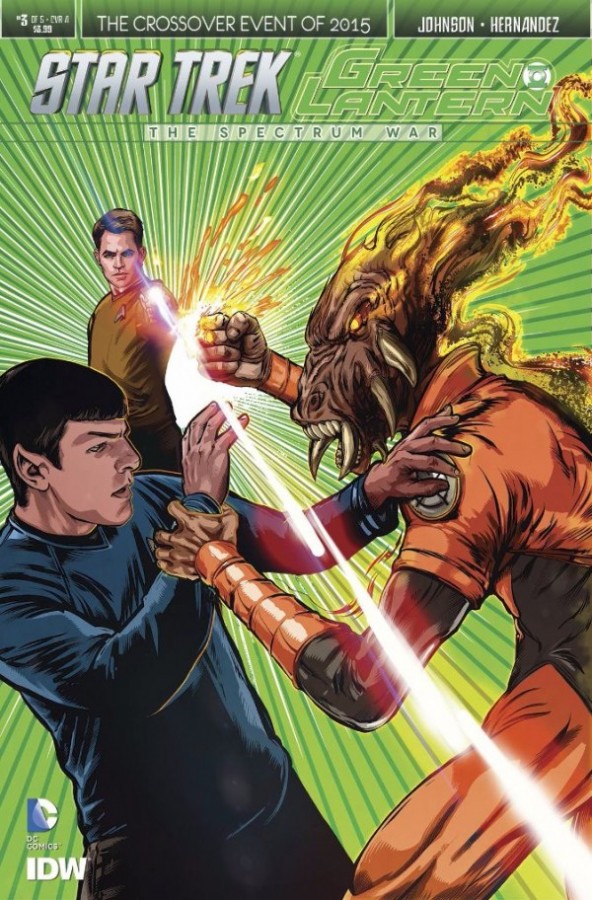 Interesting story twist. Now that all the rings have found their partners in the Trek universe, the storyline is accelerating. Now that the major villain has revealed himself, all the minor ones like Chang and Sinestro and the other avatars are small potatoes compared to the really bad guy who has come to threaten the Federation.

I’m enjoying this story. It’s a bit of fun to mash up the two universes. However, I just wish they would have used the classic Trek cast! 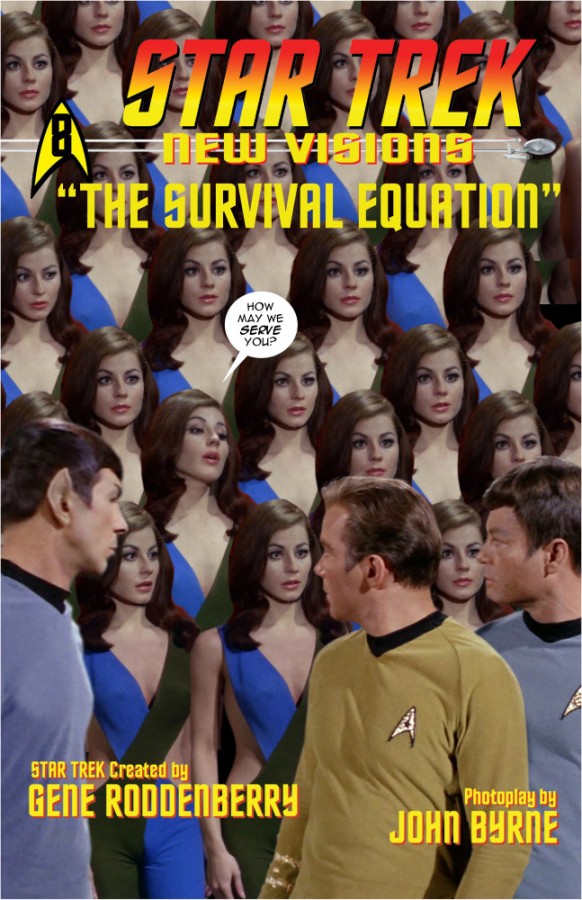 There are days when you wish you could just hug someone. I actually want to hug John Byrne for continuing the classic Trek franchise in a new way. Seriously … I miss Star Trek: TOS.

Byrne is clearly having too much fun with this project. I can’t blame him; if I had the vision and the creativity, I’d be doing the same thing. Of course, I’d need Byrne’s fame …

But the thing about this is that no-one else has thought to do this. It’s a completely novel approach to revisiting TOS and it’s about continuity and preservation rather than trying to create another version of Star Trek. You know what I’m talking about, J.J. Abrams? 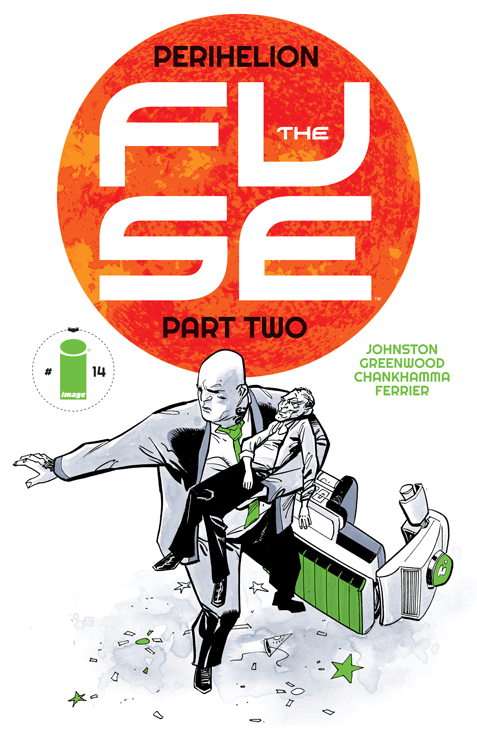 There’s a real human interest to this comic. This storyline really takes you on a tour of Midway Station, aka “The Fuse’. It’s Perihelion, which is a festival celebrating the closest distance the station gets to the sun. It’s a time of chaos and carnival and the police are up to their eyes in trouble.

Imagine Carnival in space and you get the idea.

But there are several subplots at work in this story and they really accentuate the disarray the station is in. One of them is bound to be critical, but the great thing about this book is that you have to pay attention to all of them in order to collect information to solve the inevitable mystery that is bound to follow. This is a great book and I really look forward to picking it up every month. 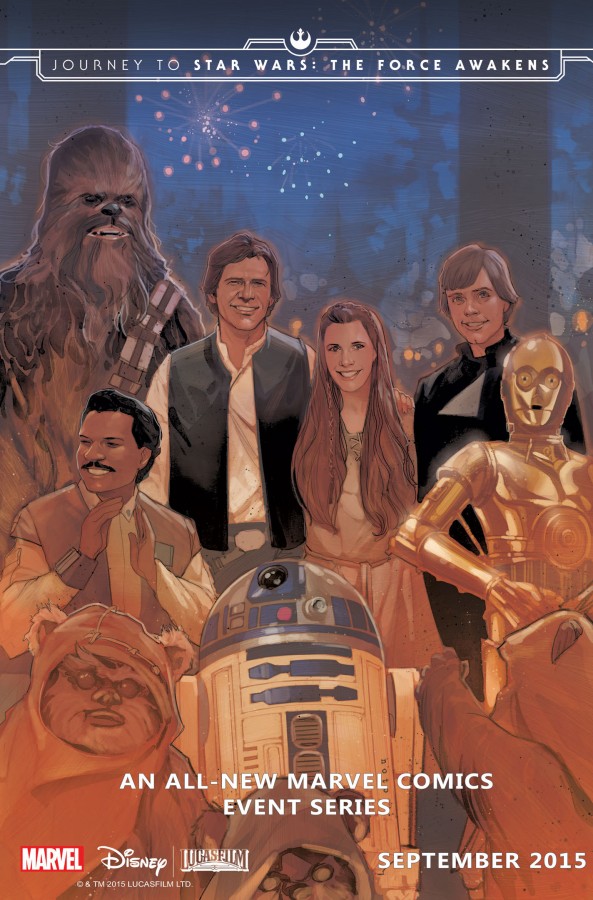 What on Earth is Marvel doing with this title? Wasn’t “Shattered Empire” on the list of non-canonical resources that Marvel was supposed to do away with when Disney purchased the Star Wars franchise? Well, I could be wrong, but it’s a question I’m throwing out there.

It’s a good story – picking up right after the end of Episode VI, with the destruction of the second Death Star and the victory at the Battle of Endor. My problem though is why do we need another comic after another episode? We currently have one – it’s titled Star Wars and it happens right after the Battle of Yavin. This is the type of thing that makes me worry about over-saturation. If Marvel screws this up by “jumping the shark” on the awesome work they’ve already done, then it’s theirs to lose and not even Greg Rucka will be able to save them.

Yeah … see what I mean? This is probably the most enjoyable Star Wars title out there, but if we have too many Star Wars titles, then the value of even a great book like this will be horribly diluted.

This is an awesome story and it reveals the weakness and precarious position that Lord Darth Vader was in after the destruction of the Death Star. It was a failure and the empire does not suffer failures readily. However, there is also the second idea behind this title: that Vader needs to rebuild his power base and his influence. It’s an incredibly entertaining premise and certainly a great story that reveals layers upon layers of deception and manipulation. 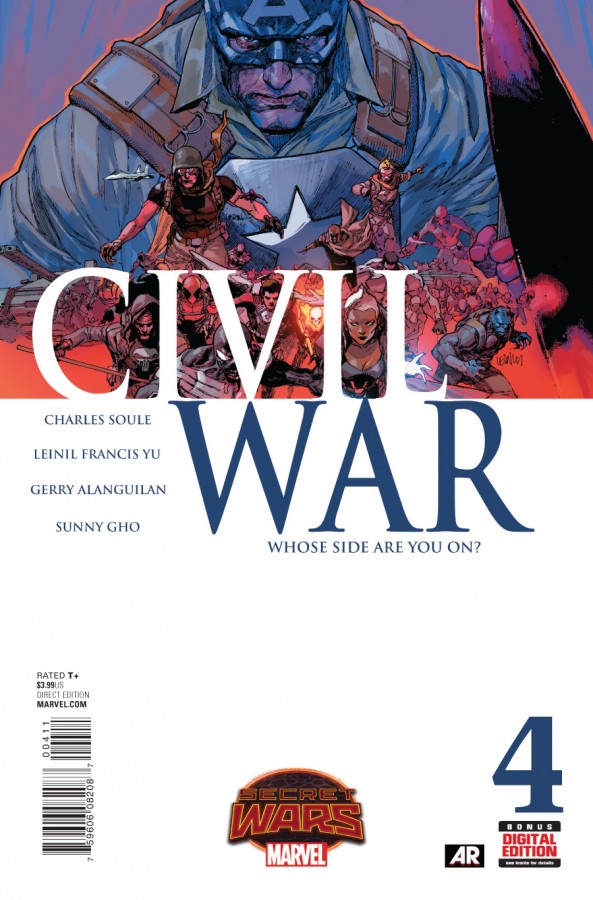 This issue revealed a twist I wasn’t expecting! An excellent continuation of the story of the Blue versus the Iron. I have to say that Charles Soule and Lenil Yu have delivered a really effective premise of political intrigue and guile in this Secret Wars tale. Of course, the world is different, but this is an “Otherworlds” tale, right? The sky’s the limit and the creators have free reign to do whatever they want – and this works really well. 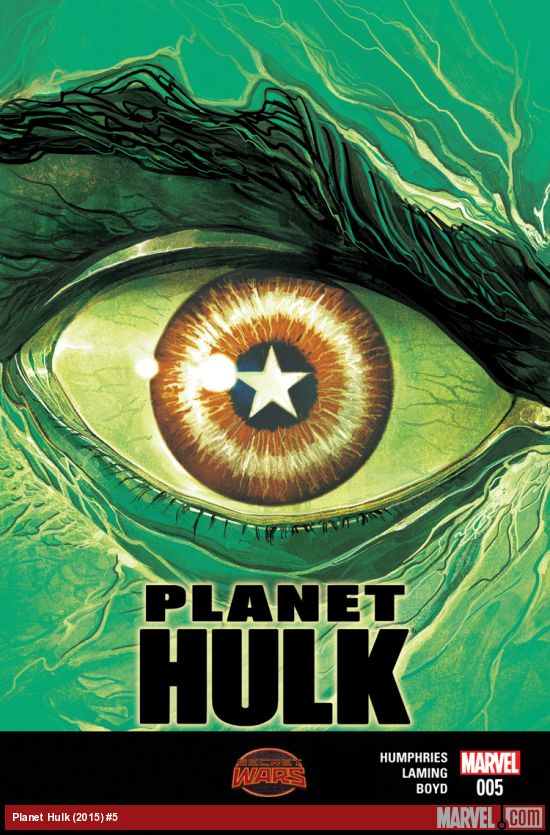 They’ve really got to hurry with these Battleworld stories. There are only about two or three issues left in the main storyline (I think – I could be wrong) and you can’t have the ancillary stories outlasting the main one, right?

However, there is such a thing as rushing a story and in the rush to end this one, it was spoiled. I was really disappointed with the conclusion of this one. It’s a real shame – I really loved it and was hoping for something big to happen to this version of Steve Rogers.

It’s also a shame that I had to invest in four issues to only discover such a disappointing conclusion. Also, the abuse of Devil Dinosaur – a character that long-time Marvel readers such as myself would welcome nostalgically – has to be chronically unforgiven. Five issues of hype and Devil Dinosaur barely breaks a sweat in the final one? Save yourself the bother – leave this one on the rack.

The Amazing Spider-Man: Renew Your Vows #5 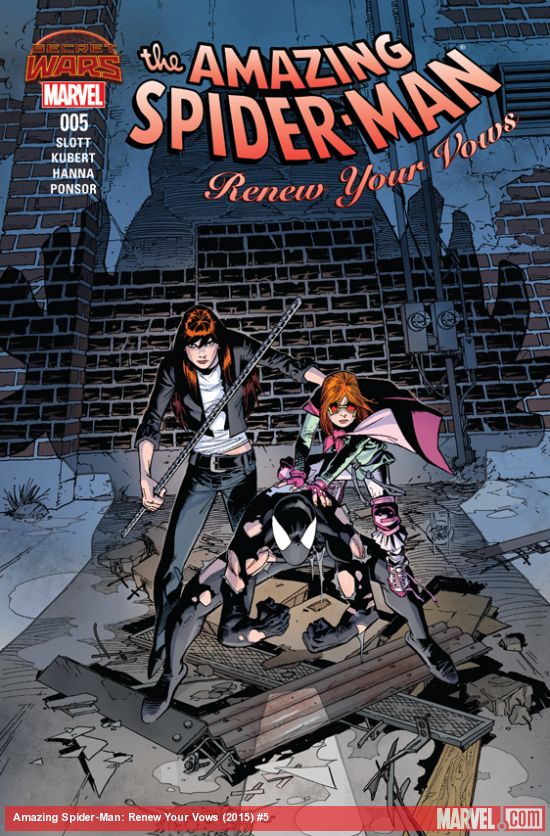 The Parker women strike back!

Loved every moment of this book. Slott and Kubert – way to go! That’s my Peter Parker! Built out of strength and determination and honed by an overriding sense of moral responsibility. Moreover, I loved that the Parker girls – Mum and Daughter got a chance to fight as well. As much as it is a traditional father’s job to protect “his girls’, there is also the realization that girls can fight for themselves too.

This has to be the pick of the week for me. With great responsibilities there comes recognition of the important stuff in life. I have to say that this was the book that really made my comic-reading week, and that’s hard for a Star Trek fan to say, given the competition in this week’s pulls.

But responsibility is at the heat of every great venture, like a comic con: responsibility to the fans, the guests and to others who become attached to the con for other reasons. There is a lot that enterprises like Fan Expo can do for charitable organizations, for instance. When you think of the influence that cons have on their host cities, in terms of revenue, attention, infrastructure, etc., the con becomes more than just about fan culture – it becomes about us all.

In Amazing Spider-Man: Renew Your Vows, we see Peter Parker give up the Spider-Man mantle for the sake of his daughter, but only to pick it up again when she is threatened. It’s the recognition of the value of that power. Let’s hope that comic-cons remember that principle as well.

Until next week – I’m getting some sleep!