I love stories – always have. Whether they were read to me at an early age or I grew skilled enough to decipher them on my own, I have always been fascinated by the power of creative thought.

I think, though, that awe has contributed to a mental laziness on my own part, in that while I can acknowledge and respect others’ talents, I find it hard to develop my own creative inclinations. I want to write my own stories, but I am still awaiting that burst of inspiration to strike me as I sit and hold fast to the faith that, eventually, it will be my time.

Faith is a test of endurance.

So that’s where I am: I celebrate the writing of other people, yet balk at writing for myself. Still, I get a sense of the vicarious as I observe phenomenally talented people create entertainment for others. So, rather than focus on my whining, let’s get to the list for this week.

“The War of Jokes and Riddles” continues through Tom King’s deft interpretation of the personalities of the prime antagonists on this story. It’s interesting how he even presents Batman with those same thought patterns.

You see this in his conversation with the Riddler. He gives Batman a summary of the situation but then can’t resist throwing in a riddle. The Batman quickly answers it, but then gives the Riddler a summary of his own – in riddle format. King is a vastly talented writer and these are the moments when that talent shines through.

I have to say, I love Mikel Janin’s interpretation of the Joker. He is truly rage wrapped up in a layer of cheap jokes. In my opinion, this is the Joker for the 21st Century. It epitomises madness in a way that I can completely accept – even with the bad jokes.

This is, by far, one of the greatest writing talents that DC has to offer. King has become somewhat of a writing deity to me in that it seems he has a cornucopia of ideas of which to throw at the Dark Knight. Quite frankly, anything he writes is something that I look forward to reading. 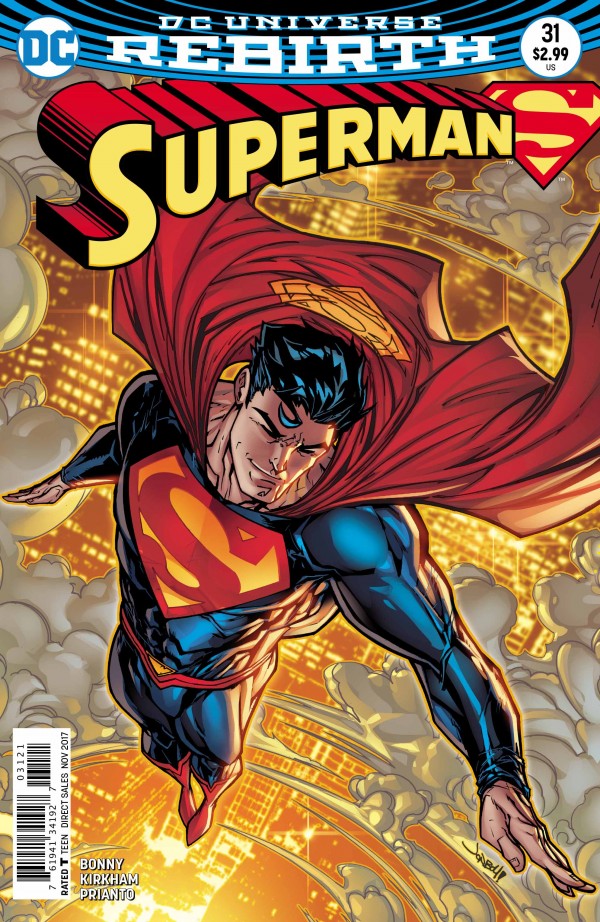 I have to say that the equivalence in sequence numbers for this title and Batman definitely work well for reading schedule. Of course, that’s a syncopation that would be expected from the World’s Finest superheroes, am I right?

This is the start of an emotional storyline. First, the initial impression a reader gets is that it’s a simple character-driven story with Lois Lane’s impulse to get an interview with Deathstroke. What I really liked about this story is that James Bonny writes a degree of respect from Superman for Deathstroke. When one wouldn’t have thought that Deathstroke would fit into Superman’s league, that respect makes him more of a threat than a reader would expect.

What’s more, the fact that Lois Lane manages an interview with the mercenary is pretty cool from a journalistic perspective.

Tyler Kirkham does a thoroughly decent job of presenting the characters and I have to say, I really liked his art stylings of Lois Lane. He made her more vibrant yet stuck with the classical image of Lane that I grew up with. I really enjoyed his work. 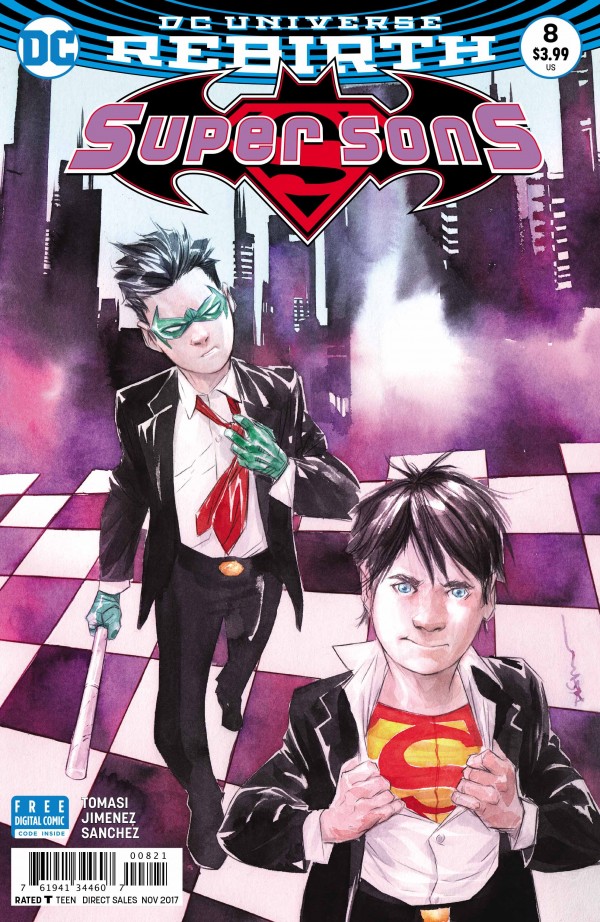 An adventurous romp that a teenage reader would love. In fact, I’d love to recommend this title to my school’s librarian for its perfect capturing of the pre-teen mindset. Of course, while we’re talking about the sons of the Dark Knight and the “Big Red ‘S’”, despite their abilities, they are still kids in the end. But what a kid’s fantasy the stories of this title are.

Jorge Jimenez’s art really exudes that playful spirit and Phillip J. Tomasi has a great handle on these characters. In fact, I would venture that his characterizations of Super-Boy and Damien Wayne will more than likely become the dominant ones for DC Canon going forward.

It’s an odd cover though… 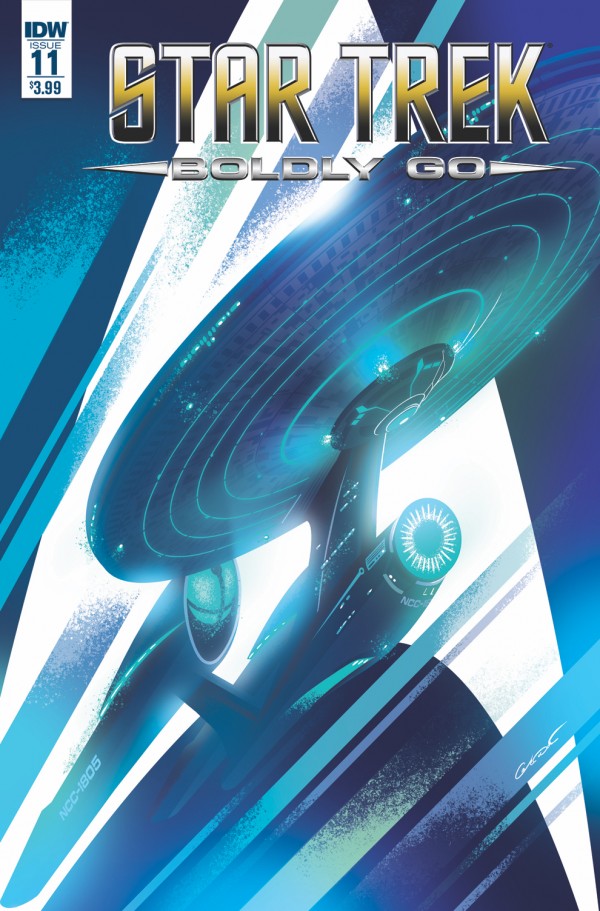 I’m of two minds when it comes to this story. The first is of a loyal Star Trek fan who enjoys seeing Trek continue in any media incarnation. The second is an impending awareness of oncoming controversy.

Mike Johnson continues to entertain with his insightful and illuminating perspective on the Kelvin Timeline. Exploring the past history of Garth of Izar is definitely of interest to me, particularly in the context of the Battle of Axanar.

I don’t want to say too much about this, as I will be exploring it in another article, but I will say that Johnson’s choice of subject for this story could prove to be somewhat inflammatory given that CBS recently sued a fan-film that was developing this character. Not to say that IDW has any worry about this, as they are a licensee of CBS, but the resulting attention this story will get will undoubtedly get some negative attention from the friends of Axanar.

Still, it’s a story of great entertainment, regardless of the associations it will bring to light. Garth is a very compelling character and given that he is the Garth of the Kelvin Timeline, we will more than likely see aspects of his character that were never fully developed in regular timeline. Johnson is a writer of great ingenuity.

This is also the first issue of Megan Levens’ regular stint as replacement artist for Tony Shasteen as he moves to the Star Trek: Discovery title that IDW will be developing later on. Levens has a solid style that’s going to be needed on a book that moves as fast as this one does. It’s a real feather in her cap that she was chosen to work on this title. I still miss Shasteen’s skill with likenesses, which I think is a must for any Star Trek comic, but there’s no doubt that Levens has skill that will serve this title well.

Still, there might be some flack in the foreseeable future. 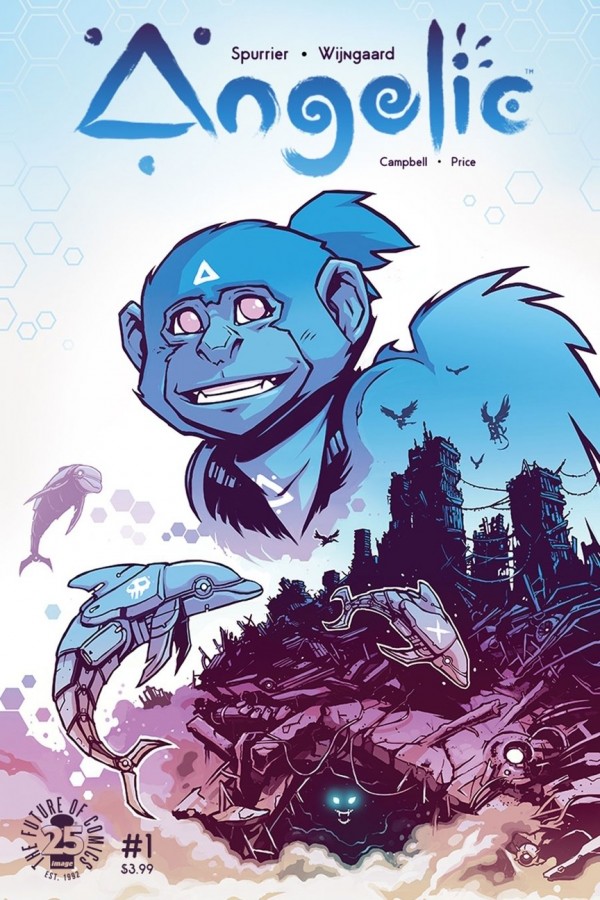 I’m not too crazy about the art for this book. When you consider the calibre of the writing, quite frankly, I think the art could have been a lot better placed. This is not a criticism of the art; it’s quite good, but it has a cartoon-ish aspect that I think undervalues the elevated, neo-religious overtones in the language.

This is a completely cool and sophisticated fantasy that links in both post-apocalyptic and animal-dominant themes. I love post-apocalyptic stories that involve the warping of customs of the forgotten past into quasi-religious lore. Tattered dogma is always a great story starter and this story with the various evolved animals formed into their tribes will hold a fascination for any reader who loves this style of science fiction.

Simon Spurrier has created a wonderfully creative vision of the Earth “After Us”, as he puts it. I encourage people to pick up this story because it’s an example of how comics are an excellent medium for innovative and rich science fiction stories. 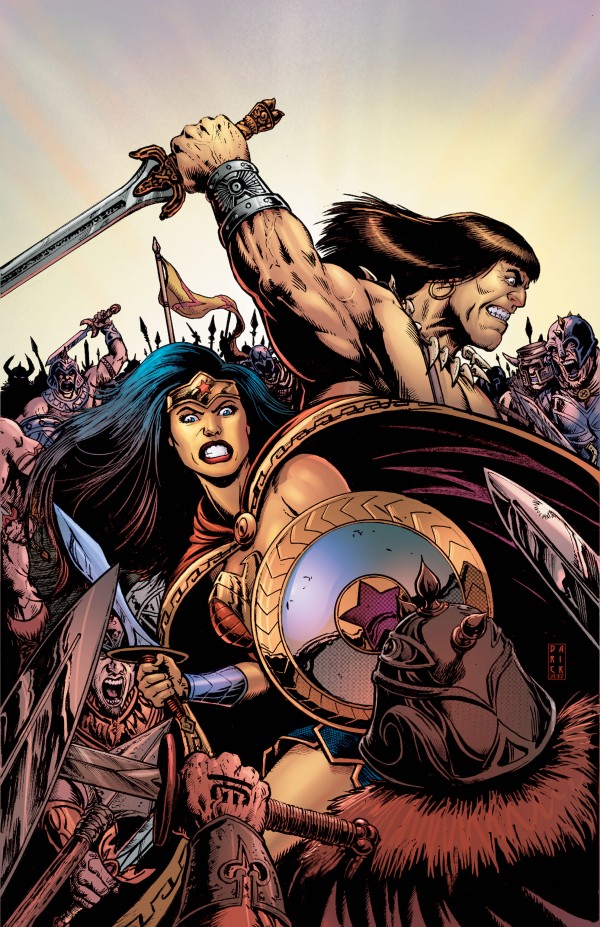 Gods … Gail Simone knows how to write epic fantasy, and what a pairing this collaboration from Dark Horse and DC Comics. Conan is a perennial favourite and the way that Simone has them meet up is nothing short of inspired.

I love the fact that these two iconic heroes meet in mutual respect for each other. There is no initial violent confrontation or egotistical chest-thumping and, in fact, Simone’s Conan is a more thoughtful barbarian than one would have expected but this gives the hero a greater complexity and level of depth that is both entertaining and endearing.

There’s also a great deal of unexpected humour in this book, for which I am intensely appreciative, yet Simone does not lose the degree of gravitas that Robert E. Howard imbued within his creation. Conan is a fighter worthy of Yanna’s, or Wonder Woman’s attention.

I especially enjoyed how we were introduced to Wonder Woman in this story too. Not so much as a definite explanation as to how the Amazon wound up in Aquilonia, just a story that we are expected to accept. With penciling like Aaron Lopresti’s though, it’s a beautiful story to accept without question.

A true pulp fantasy in the fashion that we are accustomed to in the world of Conan; this is an amazing first introduction of this title and I can hardly wait for the second issue.

Which, of course, makes this the natural choice for the Pick of the Week.

This is a story that filled me with an immense satisfaction – though I have to confess, I did use Tom King’s Batman in an English lesson today – but Simone has a gift with fantasy, and fantasy has always been a genre that has stories that take my breath away. Gail Simone left me breathless this week.

When you have talent that can instruct, shock, amaze, enlighten or even enrage, words become icons of near-magical power that can motivate even the uninspired, like me to states of euphoric delight. To see the collaboration between publishing houses like Dark Horse and DC Comics that creates such an entrancing story is nothing more than addictive to a story-junkie like myself. Simone and Lopresti have worked to create a wondrous tale that I can only sit in amazement and pray that one day, I can do the same.

It’s an enviable state to be in and this is a comic that I can’t wait to pick up the next month. After all, if there’s anything I can look forward to, it’s the promise of an awesome story …

… that will prevent me from writing my own! Thanks for stunting my own creative initiatives, Gail and Aaron! Sigh – I’ll just have to learn as much as I can from these excellent creators. One day, maybe I’ll read something written about my own work!

Pick of the Week: Wonder Woman/Conan #1