Tuesday is the day in the week when one stands upon a precipice of hope, but the middle of the week offers little respite to the dreary-minded simply holding out for the weekend. To the rescue? This week’s selection of comics. Every weekend I curate a list of books that will hopefully contain some sort of light at the end of a dark tunnel and will, with any luck, herald the approach of the oncoming Saturday night.

… So, you know, I can get down with my funky self.

I can hear the sighs now. Let’s get to the list for this week.

The OZ Effect – Part Two is a storyline that has commanded my attention. I don’t know why this wasn’t thought of before, but the appearance of Jor-El to convince his son that he is too good for humanity is a story that forces the reader if Superman will bow to the wishes of the father he hasn’t known or to the love of the only home he has ever known.

This dilemma has me on tenterhooks. Which, of course, is the way Dan Jurgens and Ryan Sook want us to feel. 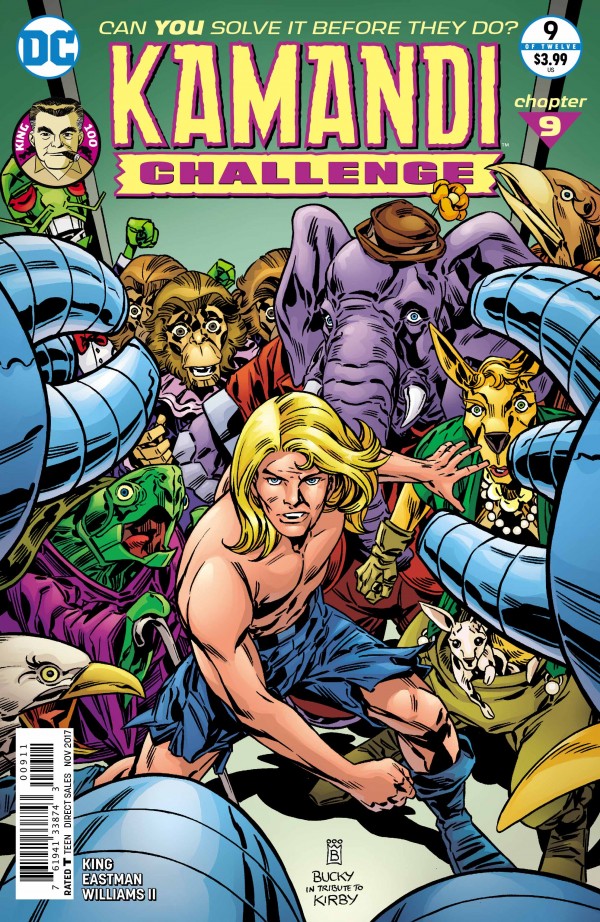 Mark Buckingham’s cover is nothing short of what Jack Kirby would have loved for this book. However, this month’s offering of this title has left me with a terrible quandary. First of all, I love it. Second, I love Tom King’s work. However, this time, I’ve got a strange feeling of unsatisfaction.

The cliffhanger pattern of this title is presented differently in this issue. Instead of the high-intensity pace, the action is repetitive and frustrating. Kamandi doesn’t experience the thrill of victory only to be thrown into a sudden cliffhanger situation, but is instead stuck in a repetitive and uninspiring loop that ultimately ends with an understated cliffhanger of futility and predictability. Instead of a thrilling sense of wonder, at the end of this issue, we get malaise.

The monochromatic art is also a failing of this issue. While I understand the reasoning behind it, the effect was a dulling of the book that contributed to not only a lack of clarity but a lack of interest halfway through the story. It was a difficult one to read through.

The only saving grace is the tribute that King yields to … the King. Jack Kirby gets a glorious tribute as his immortal words become grafted to the text of this book. It’s a reminder that Kamandi will always be a legacy of Jack Kirby and that all comic creators have, indeed, stood upon his shoulders.

As much as I love this series and I love King, I was disappointed by this issue. 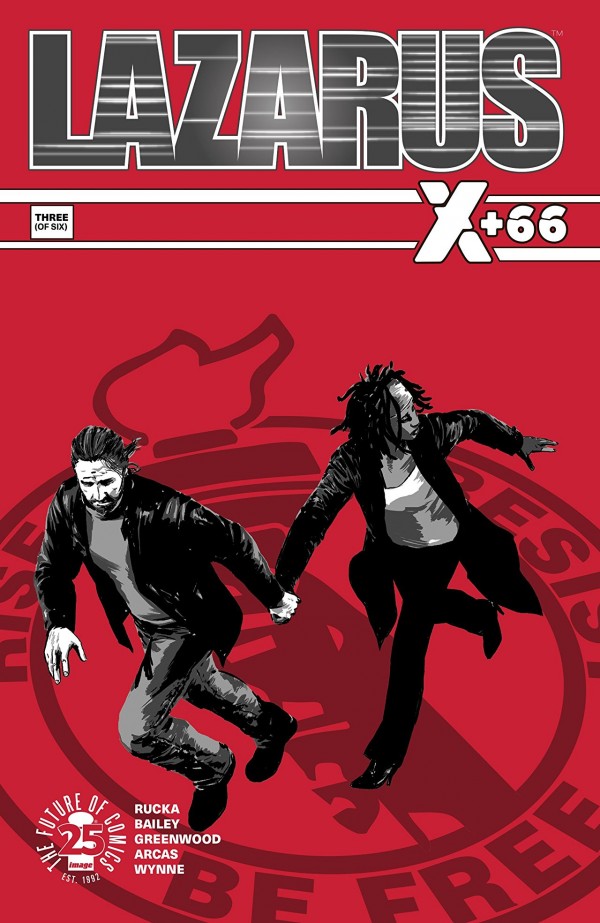 Again, Image shows us why it’s a comic publisher that is known for its quality rather than its quantity of titles. This is a Greg Rucka book that looks at the disparity of wealth in our present world and extrapolates it into a future that sees the concentration of this wealth become politicized and substitute for democracies or other forms of government for autocracies geared towards the obtainment of more wealth.

In this mini-series, drawn by Justin Greenwood, we see the wealth-deprived masses begin to raise their discontent. While the bulk of the main series has been devoted to the political and macroscopic level, there is this whole other world that yearns to calve its own stories. In fact, when I was moderating Greg Rucka at MegaCon this past May, he remarked just how many stories this wonderful example of worldbuilding can potentially create.

As we look at members of the population who have been “lifted” to better status because of the specialized merit and service they can offer the Family Carlyle, we see that revolution is nigh. Carlyle is at war with the other families but if they have to deal with them while also potentially quelling their own population, then they risk fighting a war on two fronts. What a delicious set of alternative storylines to consider.

Visceral, gritty and absolutely bloodthirsty … and all in the name of small-town football.

I don’t know how Jason Latour gets into the minds and hearts of these imaginary characters, but something tells me it’s based on meeting real-life inspirations. There’s no way that these fantastic characters could have emerged from his own mind without having a template to base them on. There’s nothing stranger than real-life, and this book affirms that notion to me e…very time I turn its pages.

Jason Aaron and Jason Latour have created a compelling and entirely human drama. I Love every page. 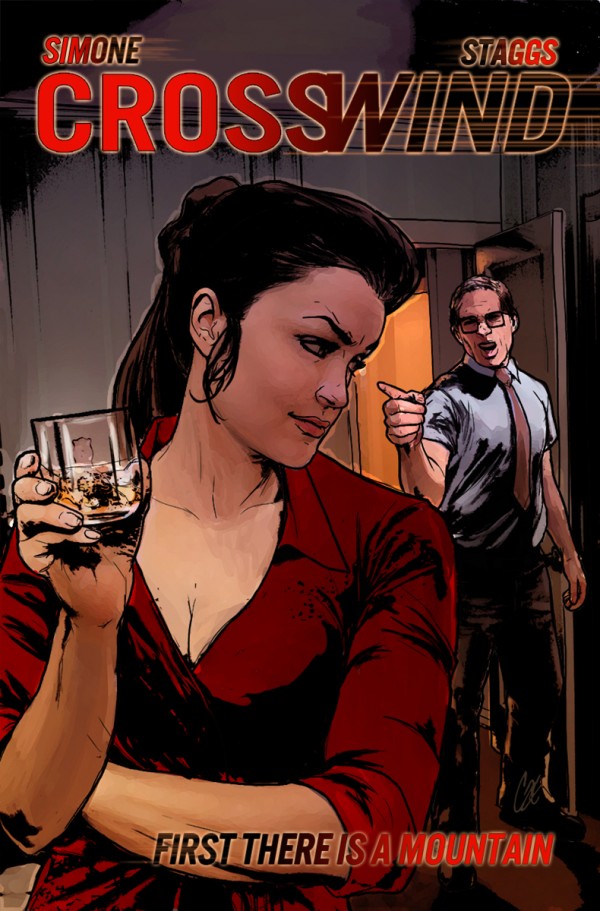 Very much like the name suggests, there’s a great deal of fresh air that accompanies the reading of this book. But while I appreciate the sense of justice that goes along with seeing gender roles reversed and the uncovering of double standards, I really enjoy the manipulation and mystery plots in the story.

It’s a wake-up call for me though. I mean, I hardly fit into the either end of the poles presented in this book when it comes to my perceptions of gender relations, but it’s a very good depiction of the danger of disrespect that I sometimes forget is still out there. Gail Simone and Cat Staggs are tremendous talents with a gifted amount of authenticity in their storytelling.

However, I love the subterfuge, the manipulation and the mob angle to this book. It’s a real kick to see a demure and sweet little housewife like Juniper lash back at the system that’s oppressed her, and the unscrupulous mafioso like Bennet ride to her rescue like a knight in armour. There are some seriously tweaked character dimensions to this story and like I said, it’s a breath of fresh air.

… and it’s the deliverer of hope needed for this Wednesday leap towards the weekend and I declare it to be the Pick of the Week. Simone’s words are entertaining and they are reminders of the injustice that still exists between the genders. The story is gripping but at the same time, it manages to impart a reminder without any sense of preachiness. It’s a great story and Cat Staggs is to be commended for her skill in rendering glorious and rich imagery.

With that story under my belt, I can now look forward to party that is the weekend.

… when I read more comics.

Pick of the Week: Crosswind #4