Dealing with adversity is a good topic for this week’s review. DC’s Greg Capullo is a real motivational guy on the subject and I think he and I share a similar philosophy. It doesn’t matter what life throws at you; it matters what you throw back. Adversity and my family are no strangers to each other and we’ve dealt with our fair share over the years. After this month, I’m looking to recognize and applaud how it gets dealt with in first week of October. So, let’s get to the list. 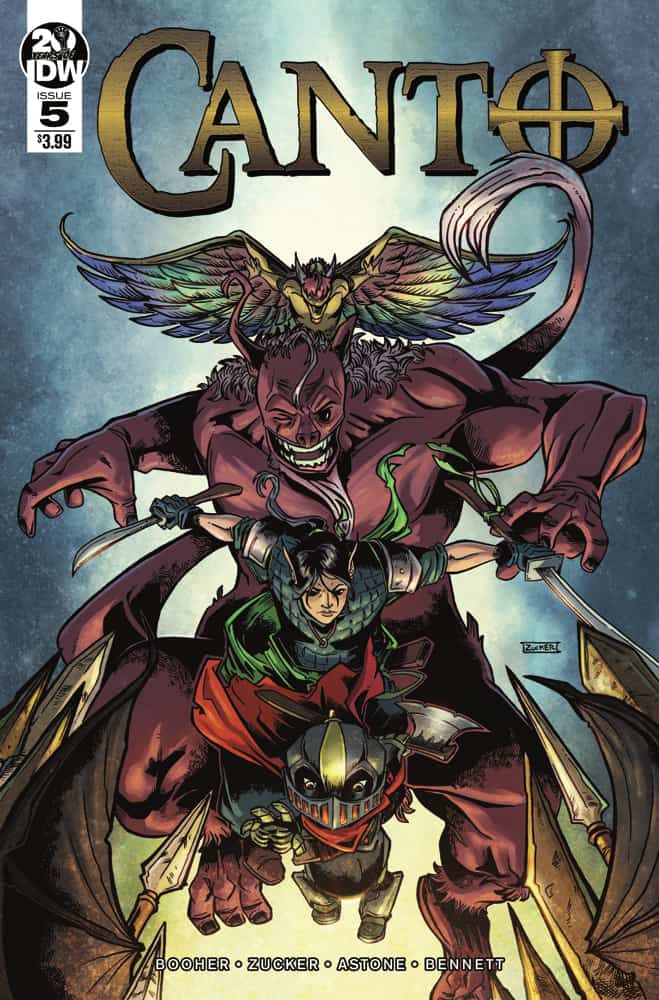 There’s nothing like a good fight when there’s an underdog involved, and Canto, our little plucky clockwork warrior has to be the spiritual embodiment of the classic underdog story.

Drew Zucker and David Booher have given us a true tale of adversity to look forward to. I have to love that in this book we see a classic comic battle with about eight pages of pure combat. If anyone doubted that this little knight could go the distance, then just see Zucker’s amazing art as the little clockwork knight willingly throws himself into the fray.

That has to be the purest demonstration of rising to a challenge. When one thinks about the conflict, that gives rise to doubt. Listening to the sorcerous beguilings of the Shrouded Man’s wraiths can only open himself to fear, but when it comes to the moment to draw blades, there is no hesitation in Canto’s actions.

I only have one copy of these books so far, but I have two daughters. I’m going to have to wait for the hardcovers to come out so I can definitely make sure that my children read this new fable of determination.

On a personal note, as my oldest daughter is a childhood cancer survivor and advocate who has already accomplished so much for kids with cancer in this country, I’d like to surround her with as many positive fictional heroes as possible. My youngest struggles and overcomes her dyslexia every day by willingly wanting to read. They need this hero in their lives, and so do we. 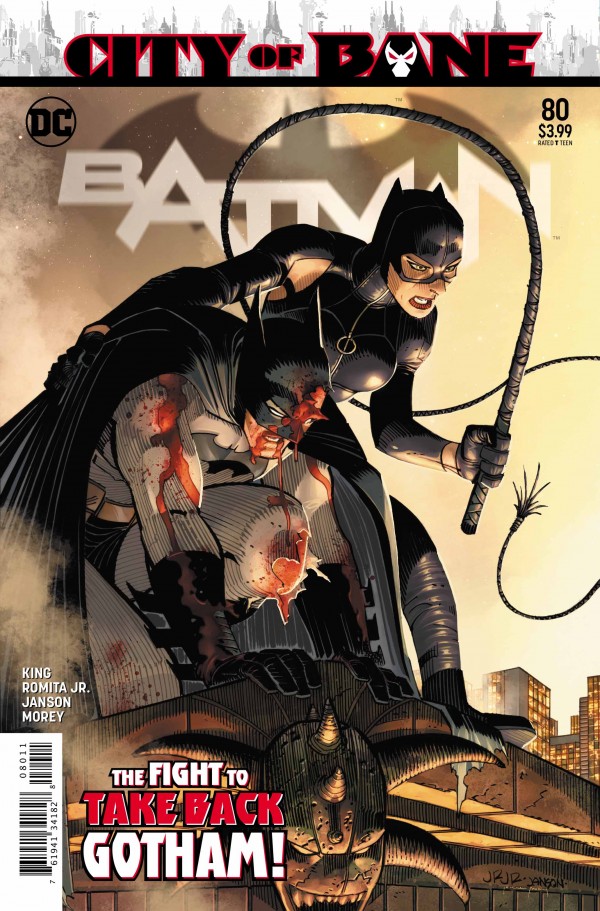 It’s fitting that we’re starting with this book. Part Six of “City of Bane’ and we finally see Bruce Wayne starting to take the fight back to Gotham City. Batman has recovered from being broken by Bane, gathered his strength and with Catwoman by his side infiltrates the city and delivers some righteously deserved punishment on Bane and Thomas Wayne’s cavalcade of cronies.

But it’s the fact that the man who could have been Bruce Wayne’s father is the source of adversity in this issue, and I gotta say, that hits me right in the feels. After all, Bruce Wayne became Batman because of his parents’ death; how wrong is it that the father who lived in another reality became Batman to punish his family? There’s a great separation of pain in this book that I think a lot of people overlook.

Tom King specializes in family dynamics and in deep connections that I don’t know if readers really appreciate. I hope they do; he’s clearly a gifted writer who likes to delve deeply into the dark emotional underbelly of his characters.

Delightfully drawn by John Romita, Jr., there’s a sense of purpose in this issue that seems to have taken forever to have arrived. It would probably be better enjoyed in a collected volume, but the issues seem too episodically stunted to enjoy on a monthly basis; still, at least Batman is in Gotham. Damian Wayne’s situation has gone form bad to worse, but I get the feeling that this might be a bit of a set-up.

However, the big scene I’m waiting for is when Bruce Wayne discovers that Alfred is dead. I can’t begin to imagine how Tom King will handle that and what sort of effect it will have on the Batman. But adversity is the Dark Knight’s game and he is a master at it. 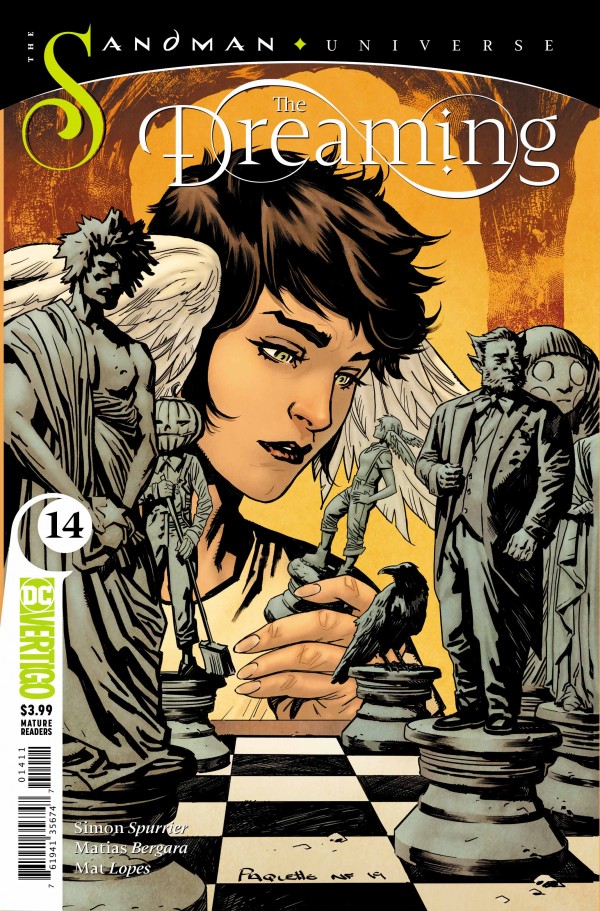 Now this is a fun one from Si Spurrier. I love stories with riddles and contests with demons. For some reason, demonic adversity really gets my gears going and this is a story I really got behind!

Dora needs to contest with one demon in order to learn more about her past. But in this case, she presents herself as outmatched and undergunned as she plays a game known as the Keening against a demon master player, second only to one other.

The real joy is in reading this book and I don’t want to give any more away. However, I will say, that this was the issue when Dora really shined for me. What an amazing display of her character in this book and made the story for me.

Matias Bergara is a new and great discovery for me! I loved the tight lines and the precise definition of Dora. She was the central focus in this story and Begara really pulled it off for me.

This was my favourite DC read this week and it was about great planning in pulling off a much-needed victory in a continued battle for the Dreaming. That’s the outcome I want to see in a bout of adversity! 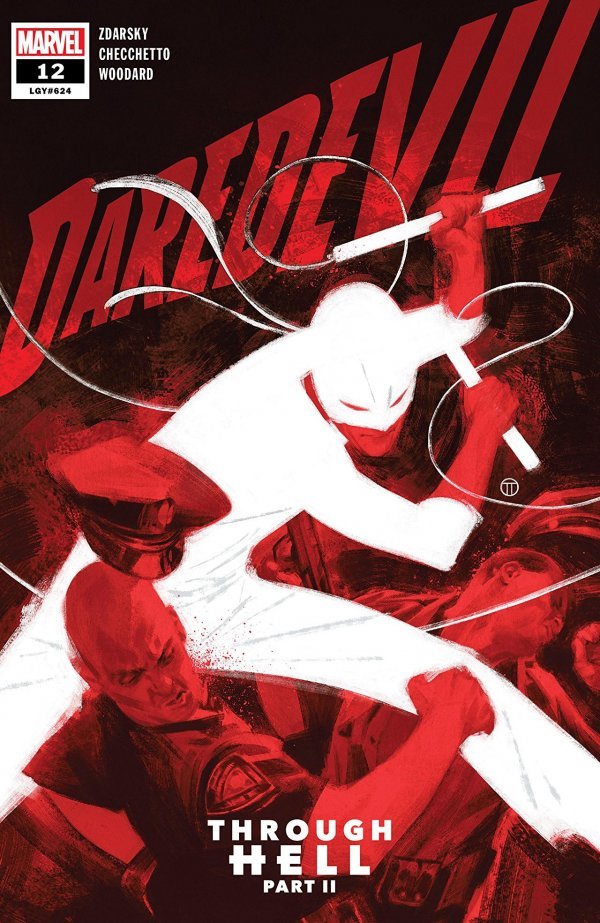 Daredevil has two levels of adversity going on right now. He has his responsibility to the public as a lawyer, but he also has his sense of personal justice as Daredevil. The conflict he was left with last issue was should he train with Electra again, to regain his poise and purpose? This issue definitely lends itself to that question.

Chechetto’s art is scintillating. It’s exciting, dynamic and really captures the emotionality that Zdarasky is trying to achive. There is so much fear, nervousness, insecurity – it’s the artist that Zdarsky needs.

But it’s the Kingpin’s personal adversity that really intrigues me in this issue. After all, he’s trying to become more legitimate and, in this issue, he gets invited to an above-board social function where by his expensive suit, he’s already set apart from the rest of the cabal of business-owners he’s to meet. He’s the man out. He doesn’t know the rules to this game, and it’s hard for him to resort back to the criminal tactics he is used to.

However, there is one scene where Wesley, his accountant and factor has been coaching him on the information he needs for preparing for this meeting. When Fisk states that he knows and that he just needs to be in the moment, there is a prideful smile on Wesley’s face. It’s these details that make a story authentic and solid.

Kingpin’s struggle to assert himself in a new game is the real story here. As much as I loved Foggy Nelson’s assistance in Matt Murdoch’s efforts, the real story was Kingpin and it was vulnerable, insightful and a new way of looking at this character that I’ve never really appreciated before. Check it out and you’ll see what I mean. Sometimes, we don’t even know when we are trying to keep our sense of adversity in check. 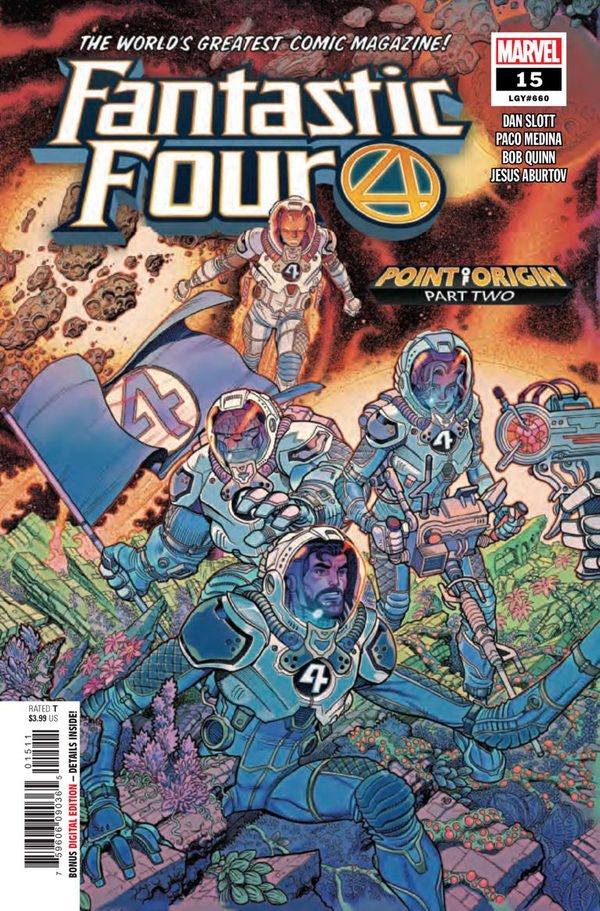 Yeah, it’s the fact that Dan Slott has captured my attention that I want to see what’s happening in this book. Last issue I was really captivated by Reed Richards’ desire to recreate the Marvel-One flight. It’s a return to their beginnings and that’s a challenge to his sense of achievement. After all, while it was the origin story for the Fantastic Four, it was also their first failure. Fighting against failure is a level of adversity that really strikes home with us all. After all, isn’t there something you wish you could go back in time and change?

Still, things get out of hand for the FF in this issue and their destination takes them to another planet that they didn’t intend on visiting, nor staying!

Paco Medina really shines in this book. I love the fact that he has new characters to draw and that these characters have a new sense of status with the FF. A great story and definitely a novel way in handling adversity – just accept it! 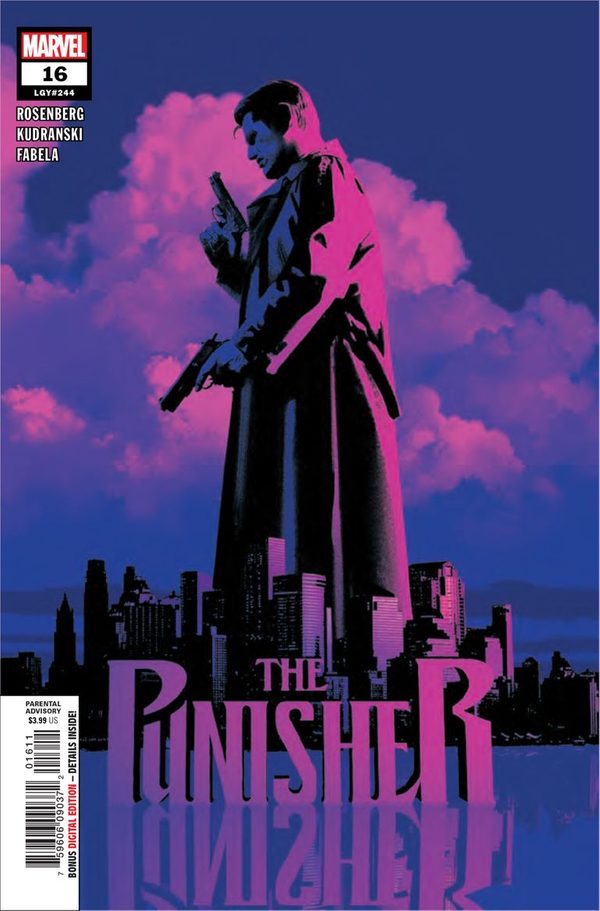 Yeah … Frank Castle, aka The Punisher knows that you deal with adversity by confronting it head-on. Regardless of how outgunned you are, you throw caution to the wind and go at it with anything you have.

Szymon Kudranski’s art matches that level of chaotic ferocity in this issue. While he always has high level of quality in his work, in this last issue of The Punisher, this time there is an intensity to its pacing that bleeds a near hyper-active rush to see it through to its conclusion. This is the Punisher’s last battle and everything he has will go into this fight.

That’s Frank Castle’s mentality. I enjoy how Matthew Rosenberg doesn’t rely on fancy weapons in his constant struggle to deliver his brand of justice, but that he uses whatever is available. Frank Castle is more of an improvised weapons expert than someone with unlimited access to weaponry. While I miss “Micro-Chip”, his weapons manufacturer from the eighties, this has always been a great approach to the Punisher, and in this issue, it stands out. It’s the essence of the man that is his super-power.

It’s about Castle’s character. The mindset of unrelenting vengeance, but to have the grit and determination to withstand soul-wracking self-incrimination while completely in the head of the type of person you are pursuing? Yeah, the Punisher doesn’t just punish criminals, he punishes himself and he is unrelenting in this aim.

Matthew Rosenberg understands that, living inside Frank’s mind for the last two years.

This is Rosenberg’s swansong and I think it’s fitting that this becomes the pick of the week for this New Comic Book Day roundup. It’s also appropriate that the theme for this week is adversity because Rosenberg has had this character in his head for the last two and a half years.

Frank Castle is fueled by the bitterness of revenge. He uses violence in all its degrees and incarnations to bring punishment to the criminal element. Like his costume, his is a black-and-white perspective; it’s kill, or else the criminals will kill again. Guns, knives, torture, improvised explosives, hell, even a rusty spoon will do, if it’s got a comfortable handle. The Punisher is the embodiment of violence applied to a societal problem.

… and if you’ve ever met Matthew Rosenberg, that’s not him. You have to ask, what was it like having this character inside your head for all this time?

That’s the adversity of writing. The mental calisthenics involved in having such a distinctly dramatic character in your head, imagining his dialogue, his responses to certain people and they amount of rage that constantly powers his nearly endlessly lethal battle against crime – what sort of effect does that have on your psyche? I can’t imagine the struggle involved in knowing someone so violent as this as intimately as a friend.

So, that’s gotta be worth some recognition.

Congratulations on your run, Matthew. It was an awesome time and I loved every issue of Frank’s fight.

Until next week, may you all suffer a little less of adversity and more of accomplishment!

Pick of the Week: The Punisher #16