I find that with trying to adjust to the new norm these days, my mind incorporates a daily changing array of ear worms. You know, when you have that ONE song stuck on continuous loop playing in the back of your mind all day? It can be a bit irritating, but the value I take is the momentum it gives me. After all, an ear worm lives because of its vitality. So, that’s what I’m looking for this week: a comic that has enough vitality that it can live in my mind … at least for this week! 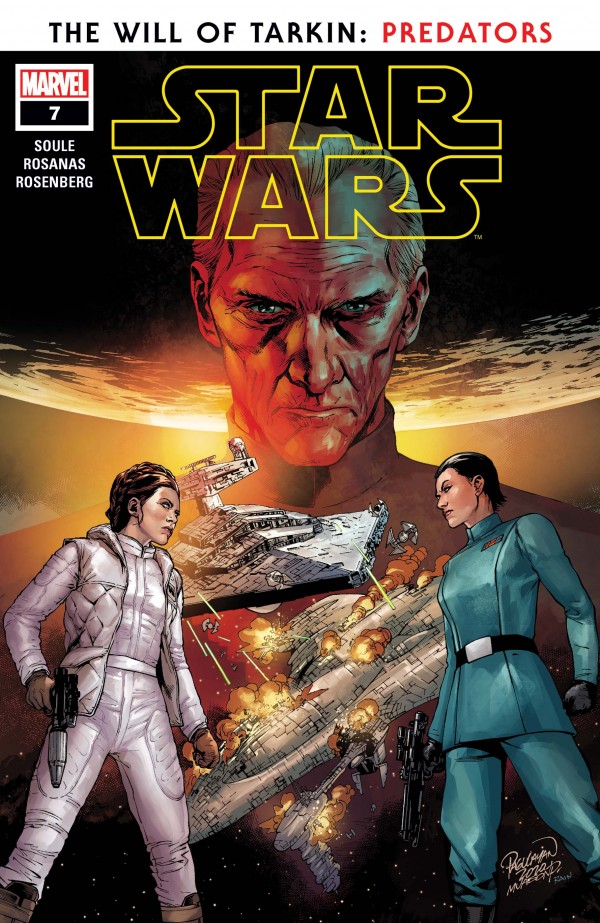 The first thing that I notice when reading this, is the imposition of the spectre of Governor Tarkin, who, in my mind, remains the most imposing representation of the Empire’s will in Star Wars. We all knew there was an emperor, but his existence was downplayed in Episode IV, V and didn’t really become a threat until Episode VI. It was Peter Cushing who was the real manifestation of Imperial Power until then, and I think created the power of the Imperial Governor in the fan base from that point. So, seeing his name on a star destroyer and in the interior art hearkens back to that power, and that definitely has to be credited to Charles Soule. The invocation of fan power, especially during the first few pages, is always a smart thing to do to excite readers. I applaud this move.

I also have to say that I like how he sets the list of battle with the staccato presentation of Leia Organa and her opposite number, Imperial Commander Zahra, giving orders on how the battle will commence. Remember: this is set after the Rebel defeat at Hoth, and that is not just a reverberating call back to Episode V, but a clarion call for fans to collectively recognize how important this story will be. Soule is very clever … but I’m sure he knows that.

In fact, that the mention of the Nihil should be enough to know how much Soule is paying to detail in the telling of this story. However, that says something about the diligence of the writer: that he has done his research is enough for me to see that he is not only aware of his subject matter but that he is intent of communicating something that it will stick in the minds of the fans who are reading this book. You know, when I teach my teenaged students, I always tell them that they need to be cognizant of their audience, and Charles Soule is a living example of this idea – and I love that.

When someone uses the phrase “I love …”, it sticks in their mind. So, I love that Soule has focused so much attention to Zhara’s back story. Her relationship with Tarkin, their mentorship … it’s something that just doesn’t speak to the story of this comic, but how much it relates to the franchise as a whole. Let’s face it, folks: how the comic can best add to the franchise is the value we are looking for.

If that reminds you of the phrase “these are the droids you’re looking for, then yeah, that was intentional, and is a reminder of the power of ear-worms.

But that’s text. In terms of pictural power, Ramon Rosanas has great lines and detail in this issue. When it comes to franchise work, you want an artist who is capable of delivering likenesses, technical detail and quality. Rosanas does all of this in spades. I want the artist to deliver work that is not only representative of the action the writer has in mind, but also something that is dedicated to the previous forty plus years of history of what this franchise has presented. I don’t want the characters who have existed in three films to look different – I want them to look like I’ve remembered, and Ramon Rosanas delivers that almost effortlessly. What I’m reading is matched by what I’m viewing and it’s good; so good, and it sticks in my mind.

How good is this book? It’s enough that it doesn’t just take my mind away from the reality of disappointing life, but that the images of it stay in my mind’s eye. To be honest, the story is so active and vital that I’m not only steadily anticipating what the rest of the tale will be but actively replaying it in my head.

Look, it’s easy to rest on the accolades that a franchise-driven book is the pick of the week, but it’s how that story relates to not only the entertainment of comic readers and fans alike, but also how t connects to the integrity of the franchise. If you are someone, like me, who pays attention to the ways that new material relates to the established canonical integrity of an established and seminal franchise like Star Wars, then you will understand how important it is for a comic creator to “get it right”. In this case, Charles Soule and Ramon Rosanas do just that that: they get it right.

‘Getting it right’ isn’t just about falling lockstep into the fabric of the franchise; it’s about paying attention to the essential values of that franchise, and in this case, the creators totally get it right. It’s particularly enjoyable how they include aspects of other films that came out 40 years later that are supposed to add to canonicity. Soule and Rosanas recognize and do just that. Showing those connections add to the enjoyment of that franchise and create that ear worm that we are “looking for”.

See that? I made a Star Wars joke.

In any event, Star Wars #7 is the pick of the week. In a time when what we used to know is being thrown out the window, it’s good to fall back on creators who understand the value of characters in a franchise-driven book. Memorable characters impart expectations for fans who rely on these for not just their enjoyment of the new story they are in, but their continued enjoyment of the franchise. These become like their “ear-worms” and they stand out as sources of enjoyment and if that’s what’s going to get me through the week?

Pick of the Week: Star Wars #7