This week, it’s the villains who come to our rescue as we consider the good … in being bad. 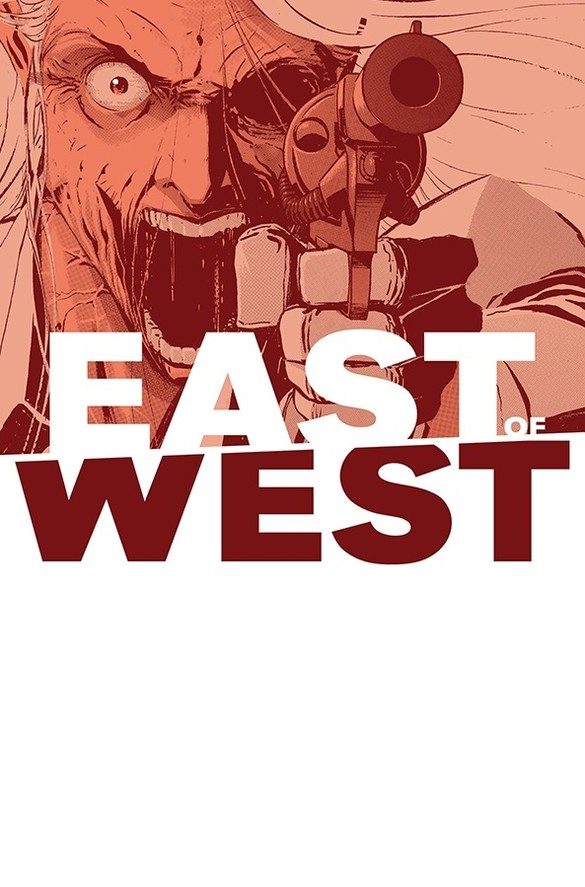 This book is always an intense experience to read. However, we have now entered what seems to be the endgame stage – of course, I’ve been thinking this for over a year now.

While Death’s son has been found by the other riders of the Apocalypse, the real thrust of this story is the inevitable showdown between the House of Mao’s Xiaolian Mao and the President of the Confederacy, Archibald Chamberlain on the field of battle.

While Mao fights for a higher purpose (the survival of her people), Chamberlain merely seeks to maintain his nation’s position and exterminate and eradicate his enemy from the world’s existence. I think the intensity in this book is in this battle when we see Chamberlain’s true evil emerge.

Chamberlain is the epitome of evil in his wanton willingness to employ death and destruction in the thirst for his power. Anyone who isn’t a friend is to be destroyed, and anyone who is a friend, not to be trusted. This is the state of things in the world in this world of Jonathan Hickman’s.

Evil is in many forms in this comic, but the reason why it is so prevalent is because of the world-wide corruption involved in holding on to power. Other nations’ leaders have been eliminated and the number of competitors for world domination has been diminished. However, the lesson that has been missed is that the struggle for power always destroys that which is controlled. That’s why we have the Riders of the Apocalypse returning to bring their brand of destruction to the world.

Except for Death. Death sees that in order to preserve the world, the cycle has to be interrupted somehow. His wife and child are symbols of the need to break the chain of destruction that the world constantly seems to be in. But whether he succeeds or not is to be seen. After all, evil has been victorious to this point.

Hickman stretches my mind in the scope of how inhuman this view of the world’s future is; it scares me that Nick Dragotta can actually envision it. 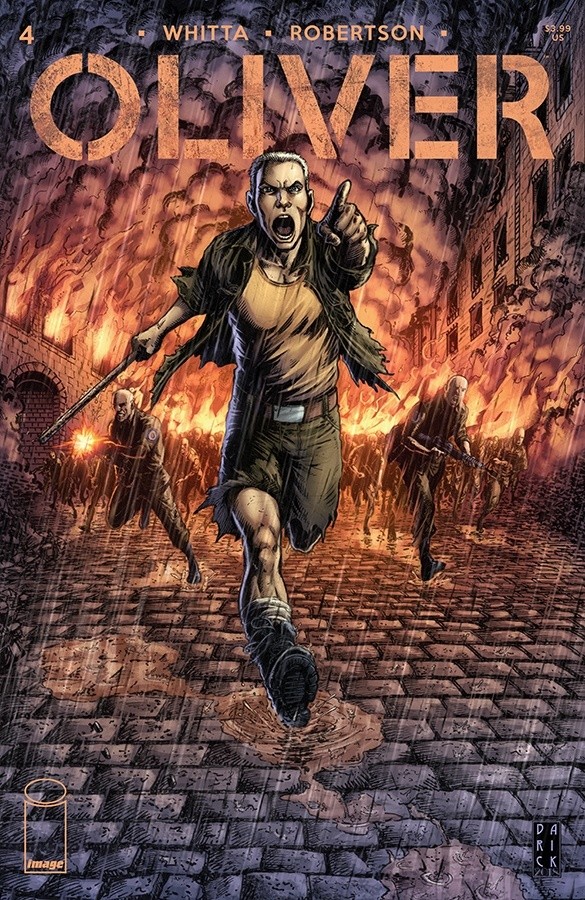 Darick Robertson and Gary Whitta have brought a wonderful Dickensian-inspired villainy to this book. Corruption, the depreciation of the human soul and the notion of slavery are all themes in Dickens’ Oliver Twist, and they are excellently illuminated by the contrast of the main character’s innocence and intuitive understanding of these evils.

Oliver has learned to be good by seeing the harm that evil inflicts. It’s a very successful exercise in contrast but it also showcases virtues of forgiveness and family, positive values made more meaningful as we continue to learn more and more about Oliver.

Robertson’s art is always exemplary, but in this book, contextualized by such virtue, it’s downright noble in its pursuit.

I have to confess though; I love the appearances of the Dickensian caricatures in their various incarnations; especially Bullseye. It was such a minor thing but I think it really captured the essence of this book and its intention. 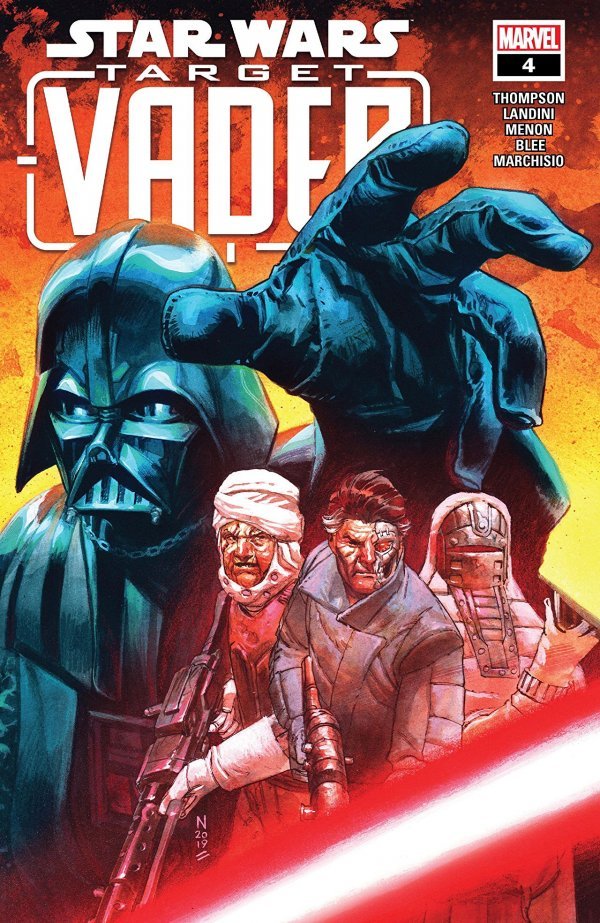 When the best villain of the 20th and 21st centuries is the target of a bounty hunter cull, you get to see Darth Vader’s mastery of evil at its finest. Part Four of Six from Robbie Thompson and Stefano Landini, titled “The Shot”, these creators really capture the essence of Vader’s instinctive ruthlessness in combat.

Of course, it’s the Force – we all know that. But his emotionless mask emphasizes the fact that he is in control. There is no grimace of pain when he is wounded, no expression or sign of struggling; regardless of the odds, Vader has the advantage even when he is outnumbered.

I have always loved that feature of Vader’s character and I think that’s what Robbie Thompson has captured in this issue. Despite the bounty hunters’ careful planning in luring Vader into a trap, it’s clear that they don’t stand a chance against the Sith Lord.

However, when there are scum and villainy involved, there’s always a good, healthy sense of betrayal. In this battle, there’s plenty of that and the focus on Vader distracts us away from the surprise at the end of this comic. It’s a very cleverly arranged story.

Landini’s artwork is staggeringly accurate in its likenesses, but I have to say that I also enjoyed seeing his interpretation on characters from the past like Beilert Valance, who I remember from Marvel’s run on comics from the 1980’s.

Darth Vader has made evil look … professional, and this is a wonderful read. 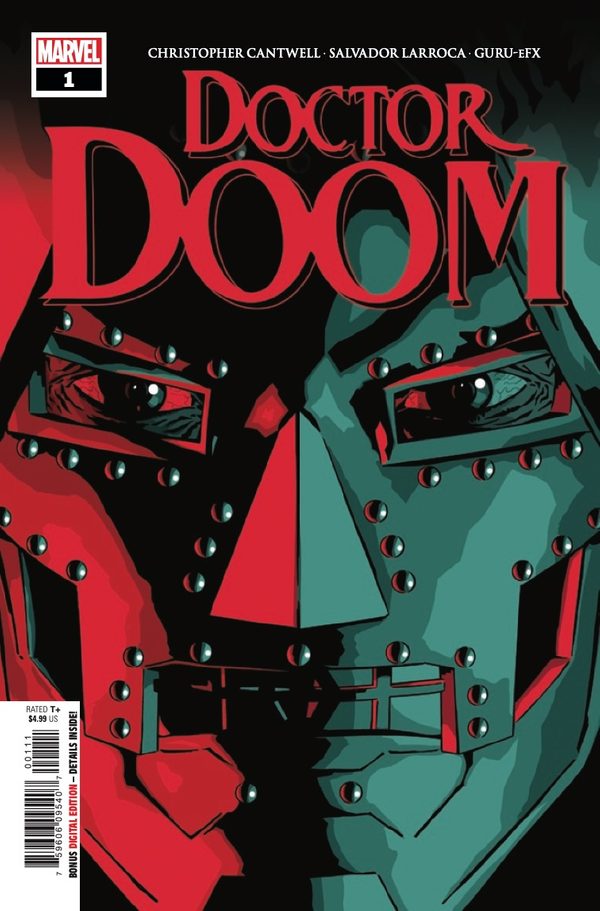 I’ve always enjoyed Doctor Doom’s royal attitude. He is an absolute despot in a modern world, and that anachronism requires not only extra effort in maintaining the image but a great deal of power. He has an ample supply of both.

However, I am amazed that it took this long for someone to put a book about Doom. After all, in the past we have only seen snippets of Doom’s life, his castle etc. This clearly will allow us to see a lot more insight and promises a greater emotional connection with the character.

Christopher Cantwell and Salvador Larroca have embraced this challenge whole-heartedly and I’m truly in awe at the depth they’ve managed to instill within Doom in this inaugural book. While we still see Doom the Despot (how he treats his servants, his interactions with members of the Press, or other super-powered individuals), we also get to see Doom the Insecure, the doubtful and even, Doom the Defeated.

Yeah, I’ll spoil this much, but Doom gets beaten in the first issue of this comic book devoted to him. But, don’t forget that even though he’s a ruthless overlord, he’s still a brilliant genius who managed to meld sorcery and science together. It’s part of a bigger game and a character like Doom isn’t in this for the short game. But there’s a great theme of self-doubt and growing older in this book that we can all relate to. Even though Doom is a super-villain, he still has human failings and undeclared weaknesses.

I have always been a big fan of Salvador Larroca’s art. I loved it in Star Wars and he doesn’t fail to disappoint in this book either.

There’s a tremendous amount of range in how we see this character in his own book and I have to say that I’m really interested to see how the story will turn out. Doom, the master strategist has found a new nemesis to overcome – himself.

That’s why Doctor Doom #1 is the pick of the week. If Doctor Doom’s worst enemy to overcome is himself in all of his hubris, ego and unwillingness to admit he is flawed, then what does that say about the rest of us?

Yeah, like I said, it’s the villains who need to show us the value in being bad this week and though Doom’s pursuit of power for his own evil and selfish means, he also has some good in the way that he does bear responsibility for his people. He values loyalty and good service and rewards those who offer him those virtues.

We always need to watch evil very carefully but this week, maybe we can learn something from it.

Pick of the Week: Doctor Doom #1