One of my greatest gaming victories was a Games Workshop board game by the name of Adeptus Titanicus. Giant robots and futuristic warriors and weapons fighting in a future 40, 000 years in the future. In the real world though, painted plastic toys that you assemble yourself to create armies. However, this one army brought me a great deal of admiration. What a great memory.

It’s a British game set in the Warhammer 40K universe, in which the future of Humanity is a grim one. Under the rule of an Emperor who lives a crippled existence in a life-support system known as “the Golden Throne”, the Terran Imperium stretches across the galaxy, in a quasi-religious/military state defending star systems from the onslaught of the Forces of Chaos. Chaos is a blight upon Humanity and has perverted the natural order of things.

However, the Imperium also defends Humanity from vicious Aliens known as “Genestealers” who also represent a threat to all that the Imperium has built. Then there are the Space Orks, and all sorts of nasty nonhuman space threats. It’s clearly has a strong stream of a xenophobia, to be sure, but the weapons, soldiers and vehicles are a great draw and really, it’s just an excuse for a good old-fashioned strategy wargame in which players get to showcase their own constructed and specially-painted armies. Oh, and knock the bejesus out each other while doing it. 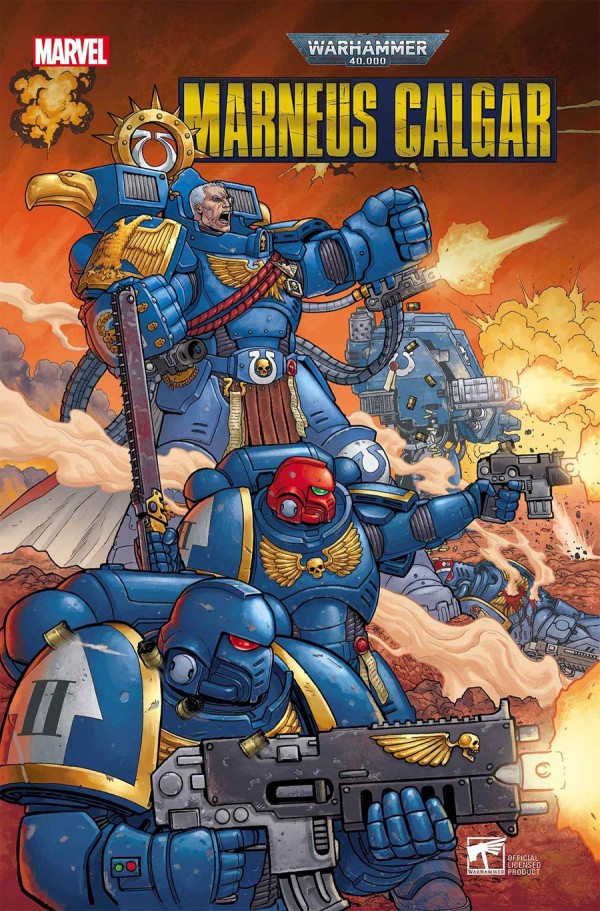 First off, I was really surprised to see Marvel pick up this property. It’s been handled in the past by Titan Comics and Boom as well, if memory serves me well. But, to see Marvel, and by extension, Disney, own the rights to create comic stories in such a dark and dystopian game setting not only excites with anticipation but also puzzles me a little.

I mean, I love this game, but I’m not blind to the fascist cult-worshipping themes that are woven throughout it. It’s completely juvenile; the games and pieces are incredibly overpriced; I haven’t been able to play it with anyone for over thirty years. However, the longevity of this property should give one an idea of its appeal. If fans are still buying this stuff and playing it for that length of time, then it stands to reason that people will want to read comic stories about it.

Like a well-aged fanboy who hasn’t been able to play the game in over thirty years, for instance? What can I say? I love it. I mean … I assembled and painted this myself. 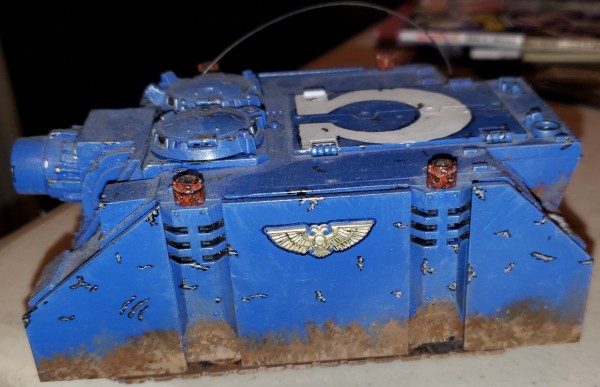 I should really tell that story about one of my greatest victories, shouldn’t I? I’ll get to it – I promise, but I want to talk about the comic though.

Marneus Calgar is the story of the leader of a faction of Space Marines, or “Adeptus Astartes” (there’s a lot of Latin in this world!) who are the backbone of the Imperium’s might. It’s basically his origin story interspersed with the current events of a looming threat of heretics harassing the world of Nova Thulium, a world that provides grain and foodstuffs for the space sector. It is a valuable world and one that needs to be protected from the overwhelming forces of Chaos and Alien aggression.

Geez … I’m really getting into it now.

I’m a long-time Kieron Gillen fan. I’ve loved his work on Star Wars, The Wicked & the Divine and Once and Future. Given that a lot of his experience with Marvel has been licensed work (like his Star Wars titles), I think he’s a perfect fit for this book.

Gillen is gifted with characterization. I believe his characters completely and Dr. Aphra would be an example of his ability to create enduring and authentic heroes that we can instantly identify and who fit neatly into the franchise. We see the same process with Lord Calgar. A young scion of wealth and privilege, we are treated to snippets of his childhood training days to become a Space Marine and then see him as the Head of the Chapter of Space Marines known as Ultramar, or Ultramarines.

The language is rich, heady and dripping with melodramatic flavour, which is exactly the right tone for this story. Heroes in this game are always exaggerated to epic proportions and it stands to reason that the comic’s characters would be – and should be – as well. I want a Space Marine who blasts his bolt-gun to the rhythm of the Litany of Extreme Excommunication! Well, that’s Marneus Calgar.

Hell, I wouldn’t be surprised if Gillen has his own Warhammer collection at home. I mean, I still do. It was art that was enjoyed – and achievable for me!

Speaking of art, if you want an artist who delights in gore, then Jacen Burrows is your guy. He’s worked with creators like Alan Moore and Garth Ennis who delight in creating the most extreme fantasy and horrific settings a writer can describe. However, it’s Burrows that can bring these ghastly imaginings to life. If you’ve ever read Crossed or Neonomicon, you’ll see what I mean. Burrows calls terror to task and realizes that which should only stay on paper.

In this case though, it’s less supernatural. Scenes of ultra-violence are prominent and only appropriate, given that the Ultramarines are the faction of choice for this story. But it is controlled carnage that not only contributes to the story but also evokes memories of playing the board game.

If you know anything about Warhammer 40k, the effects and abilities of weapons, warriors and vehicles are intricately described. Not just from a game mechanics perspective, but they are also described in storybook detail to give the player a chance to be part of his or her own story. When the dice are rolled after a weapon’s effect, the player gets to either celebrate or lament the results on the dice table. Not content to simply describe a miss or a hit, the rules in this game system describe the weapon failing disastrously, sometimes causing damage to the allies around it. In other cases, the weapon result is a glorious success in full descriptive detail leaving no fact to wonder. Injuries are completely defined as are the rewards of the conquering hero.

Yeah … it’s a fun game and that fun is transferred to the pages of this comic by Gillen’s attention to authenticity and Burrows’ disposition to provide blood for the blood god!

(Look it up. It’s a Warhammer thing.)

But I have to tell you about my great victory. There I was with and army and Titans – basically giant armoured robots who stride above the battle ground armed with an ensemble of destructive weapons. Rocket launchers, auto-cannons, the works.

Of course, my friends and I needed a space to play, and the great thing about Warhammer is that every level surface turns into a battlefield, complete with everyday obstacles acting as battel terrain to navigate or hide behind. So, the only place we could think of for such an epic game was the corridor in my friend’s University residence building.

Well, we had a plethora of vehicles, soldiers and the giant Titans complete with removable weaponry. We must have played for about three or four hours, casually dismissing the growing crowd of residence dwellers who had decided that the way I and my gang of misfit nerds were spending our Friday Night was somehow better than theirs.

It was down to my lone, remaining and damaged Titan and a score of popcorn soldiers and a squadron of Land Raider tanks. I managed to maneuver my forces behind a discarded Biology textbook that had somehow landed on the floor. I’m not sure on the rules about this, but we treated all obstacles as terrain. That Biology book saved my bacon. While the enemy was focussed on my Titan, my insignificant soldiers and tanks swung around the book and attacked my enemy from the rear. With very little chance for victory, the dice gods took favour on me and I managed to not only damage the foes with my pipsqueak missiles and melta-guns, but I also was able to deliver the coup de grace from my wounded Titan, bringing Victory for the Emperor … and all of a sudden I heard the victorious cries of exaltation from the crowd that had now grown to a respectable thirty or forty people engrossed in the antics of four 20 year old geeks playing with toy robots and tanks they had painted themselves.

Somehow, inexplicably, I became cool that night, and I owe it all to the Emperor’s Grace.

So do Gillen and Burrows. Warhammer 40K: Marneus Calgar is my pick of the week. Thanks for all the great memories it brought back!

Warhammer 40K: Marneus Calgar is a book that will rally the spirit of the Emperor’s faithful and strike fear into the hearts of Chaos Warriors everywhere! The Warhammer Universe will be a new one for many new readers in North America and Marvel is the right doorway for them to step through.