That’s the case with Conan the Barbarian #15 (Jim Zub, Roge Antonio, and Israel Silva) … and it’s my pick of the week for this week’s run. 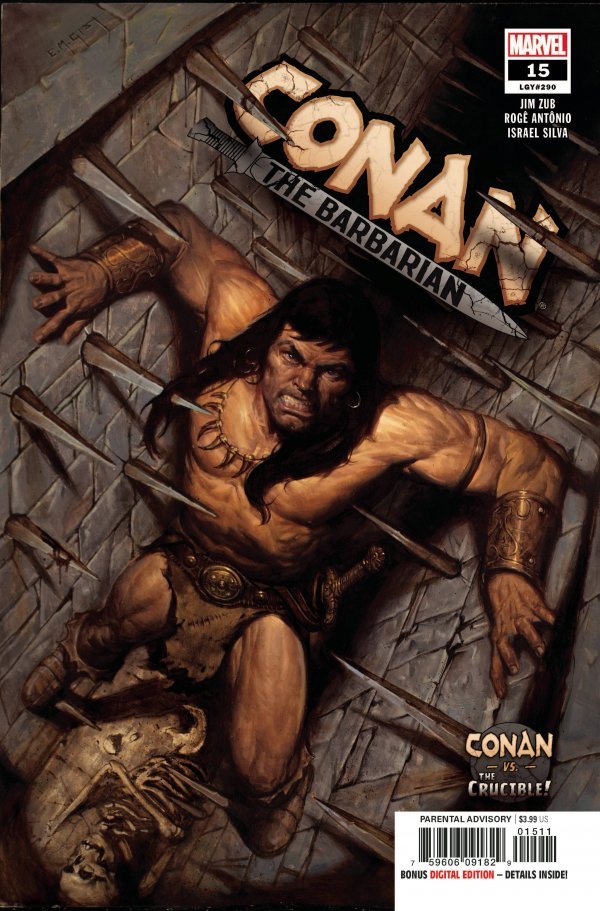 Titled “The Crucible”, I can’t think of a better way of describing how 2020 s working out for everyone. Let’s face it: it’s not the year we wanted, but it’s the year we’re stuck with. So, we either just survive it or look for the best. To be frank, I’m not predisposed towards optimism, so my best bet is to suck it up and just get past it.

As we know, a crucible is a melting pot. It gives the measure the melting point of a substance, tests its integrity to see how it can be re-shaped. The longer you wait for the substance to liquify, the harder it is. Of course, in this case, Conan’s melting point is far from discoverable and he remains hard as the Cimmerian winters. He holds firm and he resists.

This has been a bit of a crucible in terms of the wait, to be honest. It feels like it’s been a few months waiting on the continuation of this story, but I’m glad I did. Not only can I relate to our friendly-neighbourhood Cimmerian’s plight, but I’ve also been in heady anticipation seeing how he was going to get out of this trap, who the traitor was amongst the group and how can he save himself and the other worthy warriors? But the wait is worth the while as Jim Zub, Roge Antonio and Israel Silva deliver a tale that not only satisfies all of these wants and allows the audience to vicariously experience a degree of satisfaction.

I’m sure that isn’t an uncommon reaction to what must be the armpit of this century. Still, instead of just accepting and whining about it, I want to do what Conan does to the Crucible. He tackles it head on, accepts everything for what it is, gives no mercy and figuratively speaking, kicks the dungeon straight in the balls and moves on.

I think that’s the fierce attitude I’d like to adopt for this year.

Zub is in his element with this genre. He knows dungeoneering from his work with IDW’s Dungeons & Dragons titles. He knows classic swords & sorcery characters but moreover, you can tell that he has a real affinity for Robert E. Howard’s savage adventurer.

Conan hates the notion of defeat. He simply doesn’t accept it because to fear defeat is to lose. If he is to die anyway, he will throw his full self into the throes of combat, wholly and without any hesitation. To doubt yourself, is to invite death. Conan doesn’t give death time to consider an invitation and that is a real super-power.

Of course, Antonio’s work lends itself extremely well to the presentation of the grim visage worthy of a barbarian warrior. Though we only see either grim resolve or sheer rage representing the emotional yield on Conan’s face, to be honest, that’s all I want to see. Conan is a fighter who accepts nothing but victory for all else is death. Roge Antonio’s representation of these expressions is all the resolve I need to see this year on its backside – exactly like the giant gar-fish Conan has to bloodily battle in what has to be my favourite scene in this book.

Conan the Barbarian #15 is a book that shows me the savage rage of everyone’s favourite Cimmerian is exactly what this year needs.

I really admire Conan’s attitude of unrelenting rage against the crucible he’s been thrown into. It’s a modern fable for the sort of year that we comic readers are in. Like Conan though, I don’t want to simply whine about it and I think I’m going to be looking for every excuse to knock this year on its ass, and emerge triumphant in the end.

Pick of the Week: Conan the Barbarian #15