I don’t know about you, but this week, I need a little escapism. Oh hell … I need a LOT of escapism this week!

Well, that’s the segue for this week’s comic pull list. I find that comics are a far more efficient medium for escapism than any other. A television show or film will force you to sit for an extended period of time and if you have to binge? Well, your entire weekend is gone and you’re about five pounds heavier.

A book requires a heck of a time commitment and for some reason I don’t find podcasting as accessible as some people do.

Well. Twenty-two pages later and not only are you in another world, but you’re thirsting for more. In a month’s time, you’ll have your fix, but it’s regulated and dosed out at the right increments.

Yup … love my comics. Let’s get to the list. 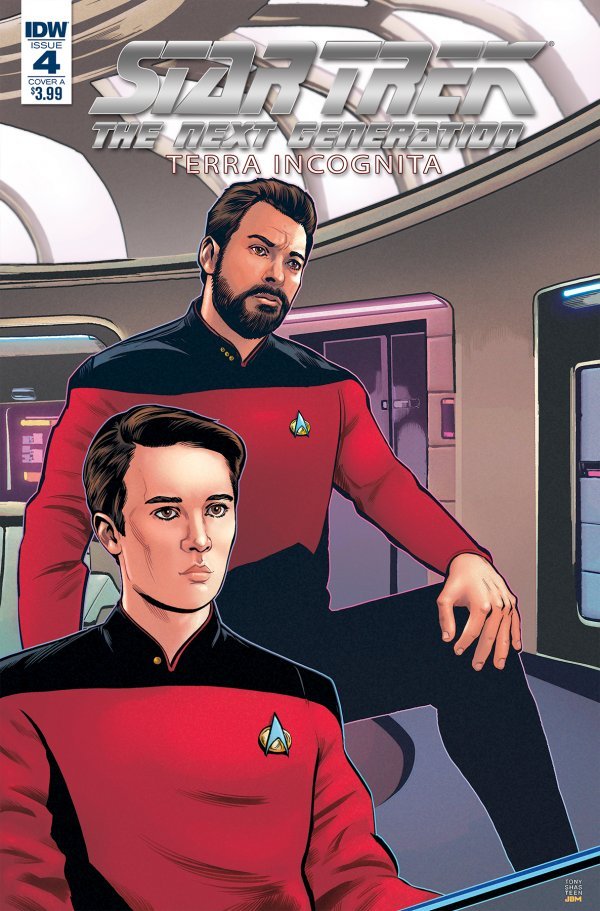 Another marvellously unique and authentic TNG Trek story from Scott and David Tipton and featuring the artwork of Angel Hernandez. This time, we even get a feature with everyone’s favourite Ensign, Wesley Crusher.

What’s really striking about this issue is the creation of an alien species that’s fits within the continuum the Tiptons have so far established in their TNG universe. This species, known as the Administrata, not only provide the Federation with an accelerated way to manufacture new starships to buffet the diminished fleet, but also give us a Trek-story that allows for Wesley Crusher to illustrate one of the values that Roddenberry himself would have approved. After all, it is the continuing mission to seek out new life, right?

The events of this story happen after the Wolf 359 battle with the Borg. This made the underlying premise of the Tiptons’ universe is that the Federation needs to rebuild, which made the incursive threats of the Mirror Universe a viable fear in their previous work, “Mirror Broken”. With Mirror Barclay in the shadows, the storyline is rife with potential adventure.

I like that the Tiptons think ahead. There are so many possibilities that make this not just a great comic but a great promise of comics to come. 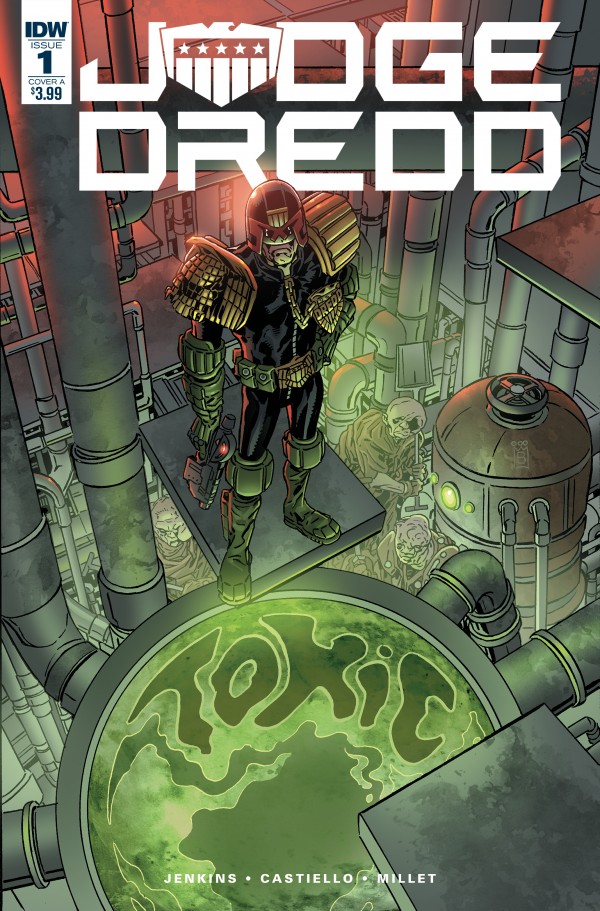 Wow. I’ve been waiting for a great Judge Dredd book that captures the original spirit of the Dredd stories that I have grown up with since Dredd’s creation back in 1976.

Paul Jenkins and Marco Castiello have delivered on a Dredd that hearkens back to his original authoritarian roots; that conflicts conscience with a strict adherence to the law. Sometimes this would bring Dredd into the realm of campy humour but the best Dredd stories are the ones that would focus on the plight of an overpopulated city trying to balance life and all its demands in a polluted and dying world.

You also have to admire the Judge Dredd tradition of sardonic commentary on current events. You can date an issue of Dredd by what celebrities it parodies, and the Donald Trump parody and message in this story is no exception to that long-standing custom. That’s another thing that makes this such an authentic Dredd story.

I enjoyed everything about this book: the story, the art and even the scrubbers. Despite how small Mega-City One is, there’s an entire universe of people and issues for the Law to handle.

… And no-one escapes The Law. 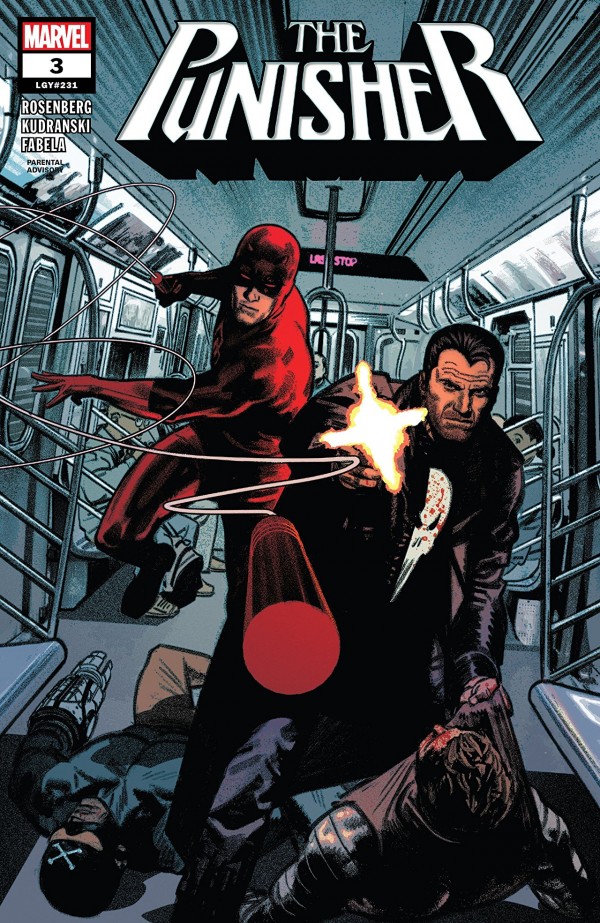 This is Matthew Rosenberg’s finger on the trigger of a weapon aimed at the most nefarious of Marvel villains. Punisher is its name.

Seriously … this has to be a comic writer’s most intense dream: imagine ways for an anti-hero like Frank Castle to kill as many bad guys as possible. Punisher is a vengeance-seeking missile and it’s a terrible yet perfectly apt portrayal of the Punisher.

This is a warped team-up issue. The comparative structure of the methodology of the two characters is incredibly well-displayed in this story; something that only an attentive writer like Rosenberg would be able to do. While Frank Castle employs a gun, Daredevil uses his staff. The Punisher’s blade is present when Matt Murdoch is equally adept at using his fists. It’s a fascinating demonstration of the differences in the way these characters fight crime and wholly entertaining.

In the end, who’s to say who’s right? Punisher’s way or the Daredevil’s way? You have to love the mini-morality conversation between the police officers in the station over this very fact. I know I did. It’s a stark reminder of Frank Castle’s black and white perspective. It may be simple on the outside, but to be a living weapon against crime has to have some sort of influence on Castle’s conscience.

The Return of Wolverine #2 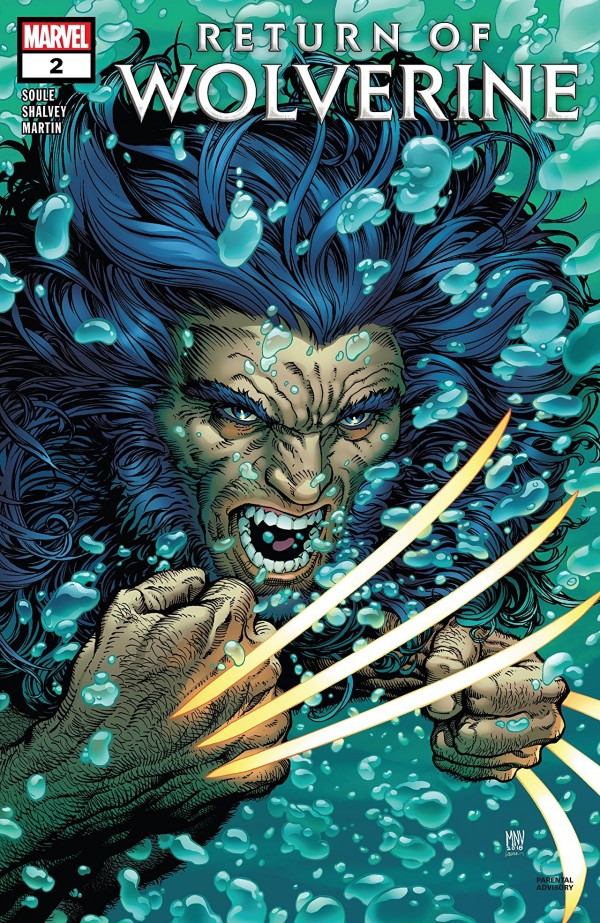 I can’t say I loved this issue. Don’t get me wrong … I liked it, but I can’t say that I was overwhelmed by it.

Maybe I’m wrong, but I was expecting more of the triumphant return of my favourite X-Man that we saw in the first issue. After all, Wolvie is back and while I’ve been loving Ed Brisson’s “Old Man Logan”, we know that his life expectancy is definitely due for a quick but heroic end.

Declan Shalvey provides the art for this book and I have to say, it’s very satisfying to see Declan get more exposure, especially in a book that features a character as dynamic and high-profile as Wolverine.

The gaps in Wolverine’s memory is a little disconcerting and a bit of a contrivance. It may factor in the future but for now I find it to be a bit of an annoyance. The development of new abilities with his claws is a bit weird too, but hopefully everything will be cleared up as we learn more about this mysterious organization that seems to have the DNA of various super-powered villains and heroes at its disposal.

Charles Soule is a talented writer. I’m going to trust that he has a plan to unfold. So I won’t escape this one for now. 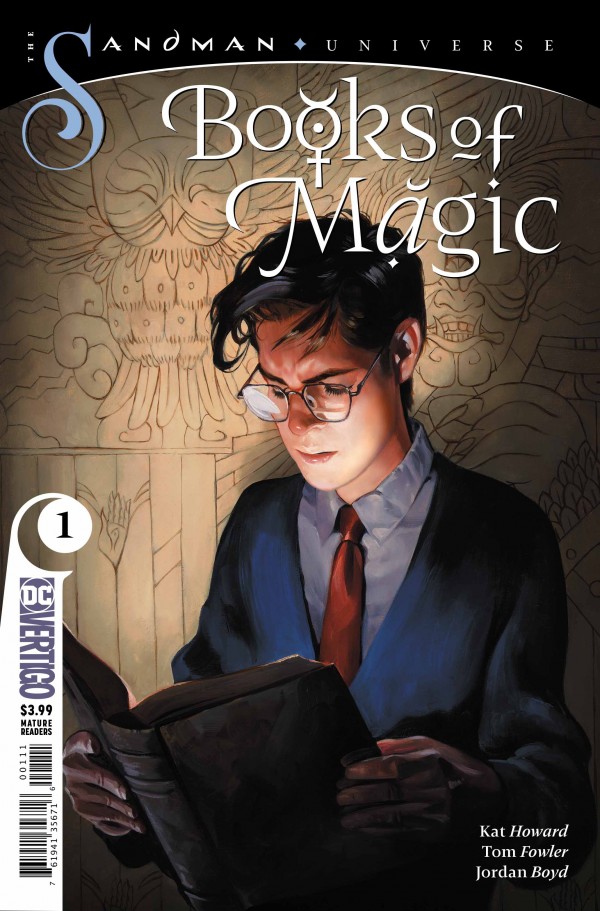 Kat Howard, Tom Fowler, Jordan Boyd have created a worthy successor to the Neil Gaiman masterpiece of the 1990’s. Of course, John Bolton’s work was featured in that earlier version, so it’s high praise and in good company.

You know, Tim Hunter wasn’t really supposed to be a permanent character to the DC universe. Patterned after John Bolton’s son, he was a character in a one-shot story that sort of took on a life of its own. But it was very successful and caught the imagination and fancy of many of those comic readers, like me, that were looking for a sense of escapism.

What would your response be if someone gave you a choice of knowing about magic or simply living a mundane life?

I don’t know about you but I’d be all over that with cheese sauce.

We get the same sense of fantasy in this book. It’s a return to that world that Tim is denied for some reason. He can’t access the magic he was introduced to and it’s causing anxiety to no end. Coupled with the death of his mother, our young Tim isn’t enjoying the quality of life he used to. There’s room for a mentor role in the story and we see that role fulfilled by the mysterious Miss Rose.

This book gave me everything I wanted: a troubled kid with a protective teacher on the threshold of a potentially great yet terrifying adventure to come. It’s a great introduction to this aspect of the Sandman Universe stories that DC is releasing and a book worthy of escape!

Of course, for me though, the pick of the week has to go to Kat Howard, Tom Fowler and Jordan Boyd for bringing this blast from the past back to me to rediscover and get lost in.

I always loved deep fantasy tales. Even to this day, I can’t wander through Universal’s Wizarding World of Harry Potter without getting shivers down my spine. It’s a place of wonder that was brought to me by a much-loved story. It’s this genre of literature that gives me shelter from the rigours and hassles of the regular, mundane world.

Like Tim, I want to be immersed in magic. Fantasy author, Piers Anthony, used to say: “with magic, all things are possible” and that applies to telling stories about them. Tim’s journey holds the promise of a wonderful adventure and these few pages are where I’d like to start this escape.

If you feel the need to escape too, perhaps this is the place to start?

Pick of the Week: Books of Magic #1