If you’ve been following this column for a while, you’ll see that my modus operandi is pretty much the same thing every week. Comics are a major part of my life, and with the exception of a lost decade, they always have been. Because of that relationship, I like to link my reviewed choice to a dominant facet of my experiences for the week. After all, we make sense of our reading by relating them to personal experiences.

This week, after a week of being ill and a screening test to see if I was exposed to COVID-19, I’d have to say that the dominant emotions for me this week have been a combination of inferiority, a sense of insignificance and above all, fear.

That’s why I needed to read Canto II: The Hollow Men #3 this week, and you should too. 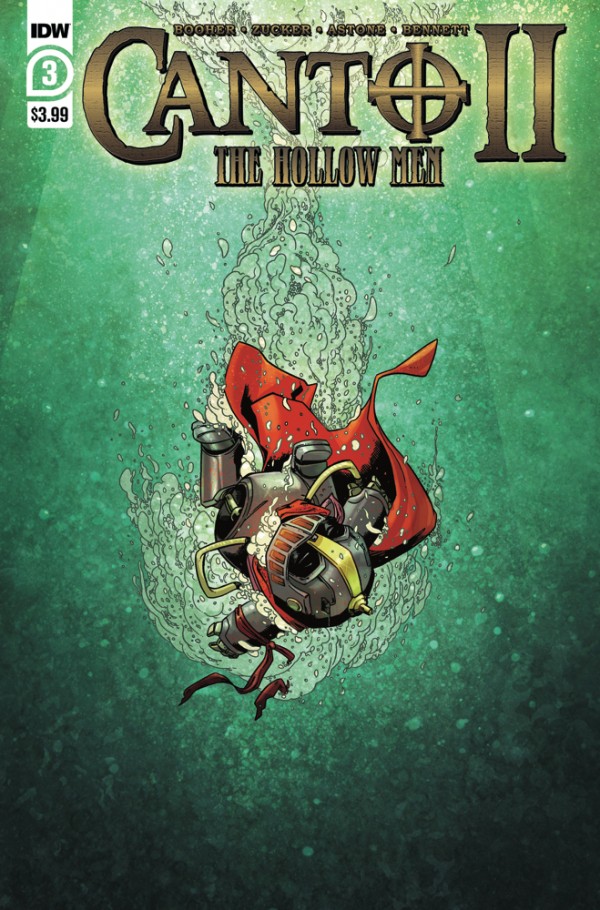 The story so far: Canto, with his small band of trusted friends on their quest to loft the curse that causes their clocks to stop, plunged over the edge of a waterfall after being pursued by furies sent by the Shrouded Man. Now, alone, lost and afraid, their quest is in need of a new direction.

Actually, I need to amend that last statement. You see, out of all his people, Canto is the one who has never shown fear. He has hesitated, shown caution and definitely paused in the face of overt danger, but fear? No, that’s not Canto’s style.

But, despite his size, his stature and that his people are an oppressed race by a sorcerer of immense power – these are things that escape his attention in his quest to free his people. His heart, though mechanical and apparently ticks, is somehow greater than these things that he can find it in himself to be even greater.

Drew Zucker’s work in depicting this hero is simply endearing. I’ve said it before and I’ll say it again, but to present emotionality without the availability of facial expression takes a real gift. Canto’s body language says everything – from the defiance he shows when confronted by the fearsome Shrouded Man to the love he shows for departed friends.

It’s also Zucker’s ability to present the trappings and backdrop of a pure fantasy realm that also can’t be overlooked. There’s a wonderful mix of both childhood fairy tales and modern fantasy representation in this story that resounds well with both adult readers and children. Canto is a knight, regardless of any presumed assignation of nobility and he’s a humble hero who I’d like my children to be aware of as they grow up in these trying times. Humble heroes are the most believable, because they don’t have a selfish interest; they really are the idealistic representations of the type of people we would want to have in our lives. I mean, who wouldn’t want a friend like this? This is how you know it’s a fantasy, because that’s a dream I would want to come true.

I want the type of bravery that Canto is able to show. Maybe it’s a good thing that he can’t show any emotion because I know, that in the face of adversity, I wouldn’t be able to mask my expression. But the fact that Canto can hide his beneath his armoured helmet helps him in his battles.

David Booher has written a compassionate, fearless little hero who has captured my heart, as I’m sure a laudable number of fans of this story as well. Canto is someone who isn’t measured by what he is able to do, but what he wants to do.

The best line in this book is: “Well, if we have learned any lesson from you, Canto … it is that hope can arise at the most unlikely times and in the most unlikely places.” That’s a lesson for us all and we need someone like that who can share that ideal with us all.

Our world is held in a grip of fear. People are dying worldwide and the rate of infection continues unabated. From a personal point of view, I know one of the creators of this book is a frontline first responder. I am currently teaching in this pandemic. Forgive me for my ranting, but Canto’s defiance of the fearsome tyranny of the Shrouded Man is the hope we can all adopt in this time of crisis.

In this time of crisis, I’d like the same ability. I want to do away with my fear and get through this year. We know a vaccine is coming; we know that in the meantime, wearing masks, washing our hands and staying a safe distance away from people – though socially awkward that may be – are ways that we can adopt to reduce the risk of infection. These are simple things that a hero like Canto would just do, because of his altruism and thoughtfulness for others.

Why can’t we just put our welfare and the welfare of others into the same sort of perspective? Your right to breathe without a mask does not supersede the rights of others to just simply breathe.

But Canto wouldn’t think like that. Canto is the epitome of fearlessness; the example of heroism that we need to live up to. He may be a fairy-tale character, but he shows us that daring to be brave against seemingly overwhelming odds is a value that a society needs in times of peril. He will do whatever it takes to secure the safety of his people, so if we are a society, why can’t we think like that?

Canto: The Hollow Men #3 is the pick of the week … and for good reason.