I miss the sense of discovery in life I had when I was a kid.

Not that I’m a jaded old grump with no thought to what’s new in the world … well, depends on who you talk to, I guess, but reading comics was an essential part of that discovery process for me. I learned new vocabulary, allusionary references; behaviour modelling and even social interactions were present in comics that accentuated that sense of discovery. Life was learned through the writings and shown by the artistry of the creators who were fundamental influences in my development.

It really does emphasize the value of comic-reading, doesn’t it?

So, we’re looking for comics that provide that sense of wonder this week; let’s get to the list. 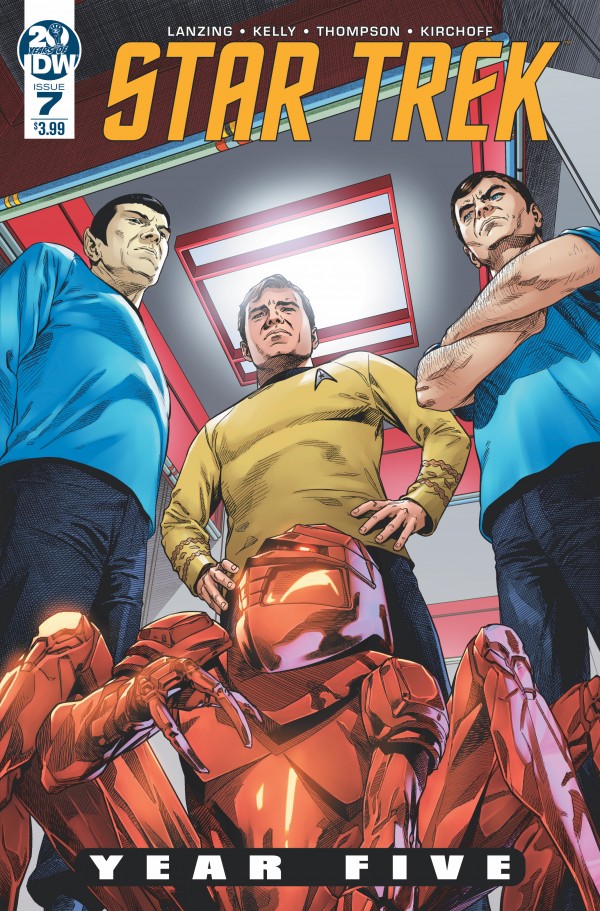 Star Trek never fails to deliver that sense of enjoyment. I always feel rejuvenated when I watch an episode of one of the iterations of my favourite fandom.

I always love it reading a rediscovery of Star Trek; usually it’s written by someone who also shares this love of the franchise and so it’s like seeing things through another fan’s perspective. That’s a feeling of community and it’s kind of like discovering a new friend, and that’s a bold thing to explore.

In this issue, Jackson Lanzing and Collin Kelly have given us a story about a child discovering these things.

The Tholian refugee child aboard the USS Enterprise – known as “Bright-Eyes”, now has the ability to understand Kirk and his crew, thanks to the work of Lieutenant Uhura and the alien artifact discovered on their last archeological mission. He reveals that the massacre of Lloyd-Zeta 9 was done by the Tholians themselves for a reason unknown to us, creating a deeper mystery.

That should be no surprise given that the beginning of this book gives us a look at the Tholian Homeworld and an idea of the functioning of their society. The arrival of a black-crystalled Tholian who addresses their Council of Elders, implicating the USS Enterprise and James T. Kirk, in particular, hints at back story that is not only tantalizing but is a drive to learn as much as we can about this mysterious stranger and why he is intent on discrediting the Federation and threatening Kirk and Crew.

Appealing to our curiousity is a great technique to enlist our inner child to continue reading this story. Lanzing and Kelly have created a perfect “Arabian Nights” scenario here and Stephen Thompson’s vibrant and dynamic art keep the pace of the story lively. The appearance of the aquatic alien the Enterprise discovers while trapped is a truly fantastic original creation and Thompson acquits himself admirably as the artist for this episode, I mean, issue.

Star Trek is supposed to excite and tease the imagination and take us on that child-like discovery of the many wonders of the Final Frontier. It’s great to read a comic that matches that ambition. 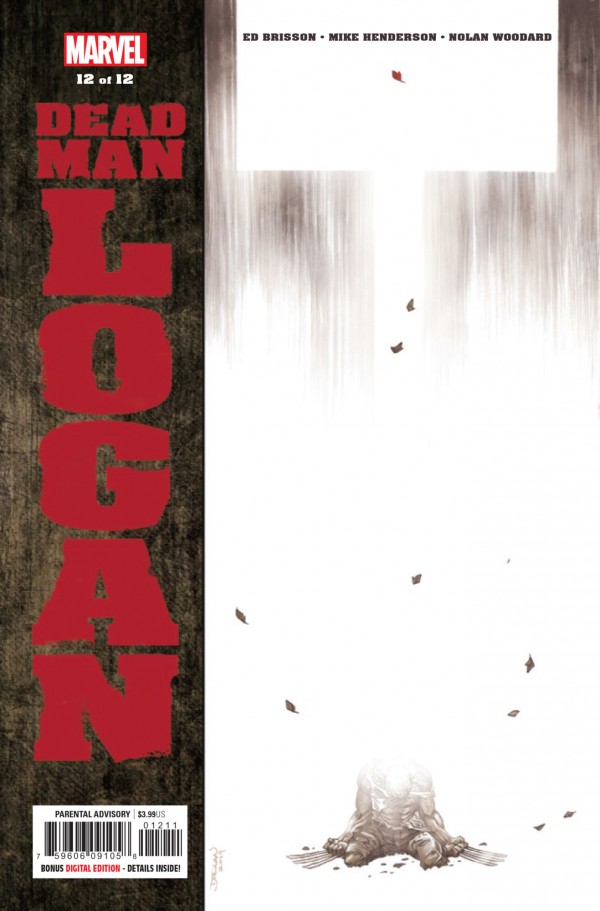 Then there’s this rendition of one of my favourite childhood heroes by Ed Brisson and Mike Henderson.

Issue #12 is the final issue of Logan’s run (Please excuse the phrasing!) and it’s also the one in which he finally meets his end.

I was truly moved by this issue. Brisson has captured the essence of the aged Wolverine; weakened and a shadow of his former self. He returns to his timeline to put things to right and make good on his responsibilities to the family he adopted and to say good-bye to the family he left in their graves.

I hate to reveal anything about this book but I will say it was an affirmation of the heroic qualities I loved in the Wolverine when I was a kid. Logan was always a loner and he was a character that many kids on the fringe could relate to and wished they could be, given his tenacity at surviving whatever life could throw at him. Wolverine was the type of hero loner kids could look up to and wish they could be.

Logan’s adoption of the puerile Bruce, the last of the Hulks, is a fitting legacy, knowing that this kid will also be alone in his own way. Though he will always have a friend in Dani Cage, she will never be his true family and this was a path that Logan had placed him on from the very beginning.

There are a lot of parallels to childhood in this book but the end of Wolverines’s life is a contrast that marks these childhoods as important. Bruce will clearly go on to be a force for good in his decimated world, with Logan’s father-like love and his affection for Cage as his standards to guide him.

I still can’t help but be saddened at his death, though I take comfort that he is finally at rest with his family. His guilt is hopefully assuaged.

It’s a fitting end for this hero and Brisson and Henderson have done him true justice.

There’s nothing creepier than when kids are involved in a horror story, and in this tale of the Crimson Witch’s revenge, the young acolytes of Razazel (Razza and Zazella) and the children of the Witch herself thirst after Conan’s blood.

I think Conan was an essential piece of every fantasy-reading fan’s childhood. Conan is the embodiment of pure adventure and his stories must be continued. Jason Aaron and Mahmud Asrar clearly know what they’re doing. While Aaron has the required pulp-flavour for the dialogue, Asrar knows how to draw the visceral nature of this eternal character as well as these murderous little moppets of evil who prove to be fitting adversaries for the Cimmerian.

This story has all the right elements of pulp horror/fantasy: a relentless thirst for revenge, twisted innocence, a good, solid sword-arm and an abundance of blood to spill.

Aaron tells this story through the eyes of warped children and it’s a delightful murderous romp as these evil minions and their zombified mother gladly and gleefully wash themselves in the red life-blood of their enemies in their pursuit of Conan. Only Conan’s blood will be enough to raise their blood-god from his slumber and it’s a prize that can only end with their death or Conan’s.

Of course, this is where Asrar’s art is at its finest: blood and gore are truly his specialties and his portrayal of the Crimson Witch in her death-state is an image that will keep me up at night.

I was really taken with this dark horse from Phillip Kennedy Johnson and drawn by Riccardo Federici.

When I was a kid, if there anything I loved, it was discovering new fantasy fiction. I devoured the masters of fantasy: Burrows, Lovecraft, Tolkien and all the other worthy authors who provided me with endless hours of reading joy. Reading a new fantasy book was a surprise gift; one whose discovery was only matched by inevitably learning it by heart. I read Howard’s Conan so much that it led to Karl Edward Wagner’s Kane and to more savage swords and sorcery titles to satisfy my thirst for fierce fantasy. Each new discovery was a new childhood memory and a joy to read.

That’s the feeling when I read The Last God.

There’s something about discovering a new story in this genre that not only excites you as you lose yourself in its new mythology, but it also gives you a sense of child-like wonder as you watch familiar heroes and motifs reshape themselves in ways you didn’t expect.

From DC’s Black Label, this epic-scale high fantasy presents to us The God-Slayers, a noble band of adventuring heroes, who have saved the people of Cain Anuun from the destructiveness of dark gods. Led by Tyr, their leader and the slayer of the last god, he becomes their king and the tales of their heroism are celebrated and remembered for decades afterwards.

This is a book that hearkens back to the classic stories of pulp fiction, but made exciting and fresh by a combination of powerful and modern themes and dynamic visualization. The themes are guilt and redemption, two very powerful story motivators that I think are very receptive for a modern audience. Eyvindr’s faithfulness to the heroes of Tyrgolad is starkly bold, immediately marking him as a character we can immediately relate to, but also understand that he has a major part in this story that will be revealed in the issues to come. Johnson’s portrayal of him as a heroic figure, slighted by the leaders he reveres, makes him positive and even more interesting.

There is a wealth of discovery in this book. A land with a sorcerous mythology, a realm of characters to read about and a quest that is to be revealed.

This issue is a perfect set-up issue. The characters are viscerally real, extreme and completely fit the genre. We have an excellent background story that sets up a tale worthy of the pulp fantasy masters themselves. It’s a story that has a lot of promise.

I’m a kid again. I’ve discovered a story that I can not only get excited about reading but that I can look forward to reading every month. It’s like a repeating gift and The Last God is the pick of the week for this week’s list.

Hoping that your next week allows you to return to some of those moments of childhood happiness.