Well, Halloween is once more upon us. It only makes sense that the theme for this week would have to be one that’s inspired by scary stuff and things that “go bump in the night”. Maybe that’s too much of a simplistic theme but the one thing that I’ve discovered in life is that things are never quite as simple as you like.

Insert characteristic scary laugh here. Now let’s get to the list for this week. 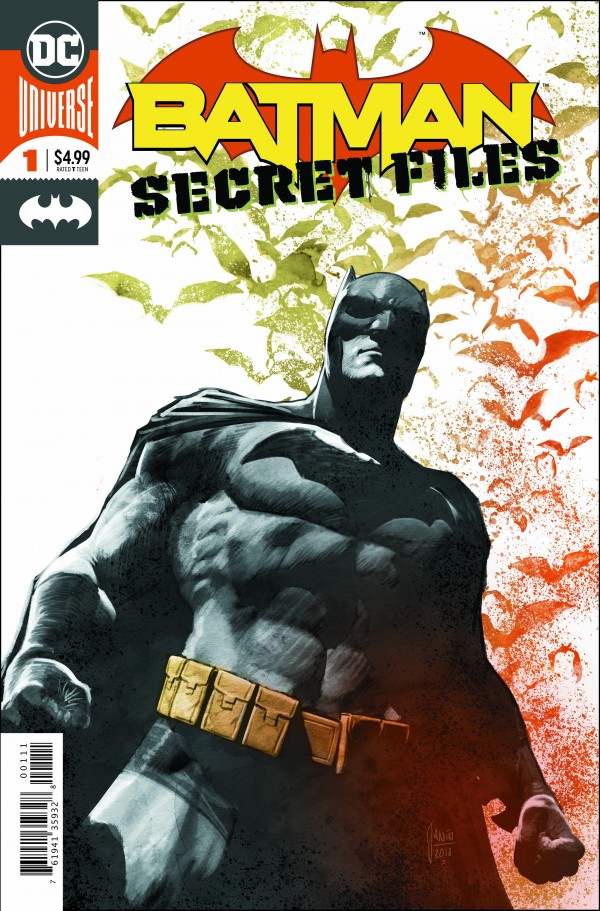 I love a good anthology book. It isn’t just a chance to showcase different talent, it’s my cheap Scottish nature that makes me see this as getting more than just one story for my hard-earned dollar. That makes me naturally predisposed towards books like these.

In this case, we have the talents of Tom King, Mikel Janin, Tom Taylor, Jordie Bellaire, Jill Thompson and others of note to enjoy in a grab bag of fear delectables. Tom King’s story, titled “True Strength” cuts to the core of insecurities: the fear of not having what it takes to succeed in our individual pursuits. I, for one, wrestle with this fear on a daily basis, as I’m sure most of us do. But there are times in everyone’s lives when it is essential that we do not fail. Our kids, our jobs, other people who depend on us – they all matter and the biggest fear is not personal failure, but failing other people.

The last story in this anthology is Tom Taylor’s “The World’s Greatest Detective, and Batman” where we learn a bit of humanity from an unexpected source. Batman gets a visit from Bobo, the Detective Chimp who needs a favour from the Dark Knight.

Being a hero isn’t just about special abilities or super powers; it’s about intervention at the right moment. Being there when someone needs you to be super is a power in its own right. Bobo, the Detective Chimp is hardly a character you would take seriously, and in fact, there are times in the story when Batman doesn’t. But, it’s the way that Bobo is there for a person in need that makes us – and Batman – regard him in a totally different light in this story. It’s a feel-good tale, but it’s also one that also reminds us of our own fallibility and the fear of not measuring up to those who have expectations of us. 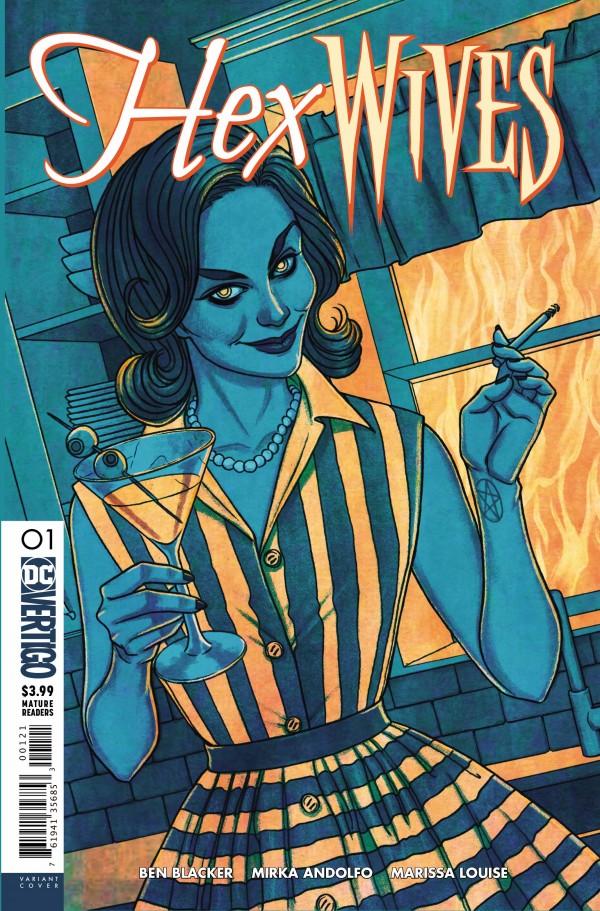 Ben Blacker and Mirka Andolfo give us this tale of witchery throughout the generations. I can’t say if it was a tale that inspired fear though. In fact, I had nothing but the greatest sympathy for these women who had managed to survive through generations of male-dominated history without actually learning what it was that made these men afraid.

I mean, sure … I can buy them threatening the establishment back in the 1600’s but after all that time, am I to believe that they can’t find any male allies who would be willing to secure their secrets in four hundred years? Yeah, men can suck, but I didn’t really buy this story.

I’m just not afraid of empowered women, I guess. 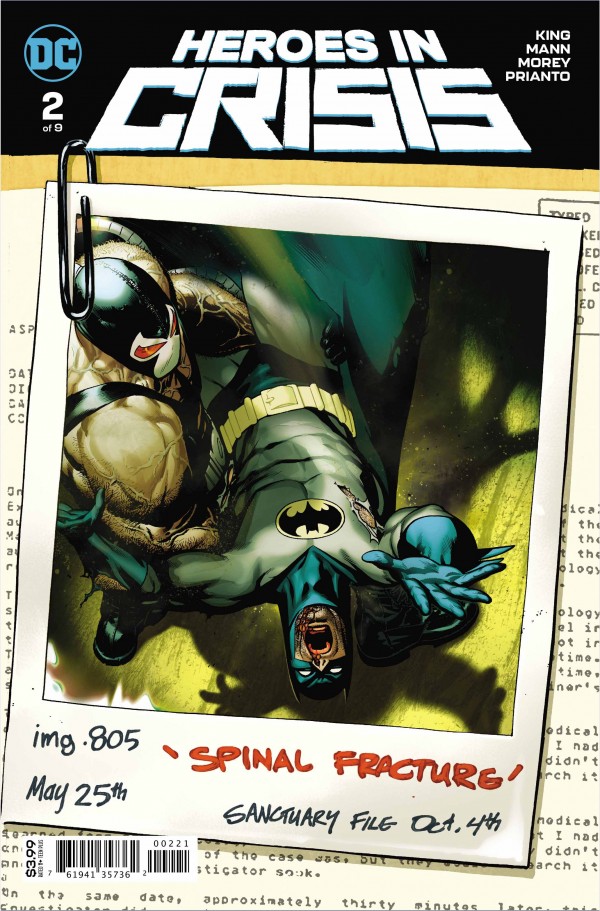 Again … there’s the fear of never measuring up.

Heroes have so much pressure on them. They have to be perfect; they have to be solid, to the point where nothing can penetrate them, bring them down or even soil their capes. So much depends on not just their ability to save the day, but to live past the event.

Trauma affects the human psyche in a way that no one can ever predict its effects on us as we continue to travel forward through time. In this issue, we see snippets of self-doubt in the minds of the greatest heroes in the DC Universe and the question that keeps coming back to me, as I read this, is echoed in Tom King’s previous work this week: Am I enough?

I ask myself this question every day. People assume that once you live through a trauma that you never want to go back to it in your mind or that if you survive, you become stronger for your experiences.

Speaking as someone who lived through five years of trauma, I can honestly tell you that’s a load of crap.

You actually do visit the place in your mind because in a twisted way, you are proud of your scars. You are proud of your ability to keep standing and to continue to function. You are not made better for your experiences; in fact, you are made worse. But, for some unknown reason, you suck the trauma back into your belly, you stand, and open the door to walk outside and face the storm.

Your trauma never leaves you; hence the fear of never measuring up.

But, fear is a good thing. It keeps you alert; it keeps you aware of the fact that you are still moving.

This is a story about dealing with that fear. Booster has tasted it; Harley Quinn lives with it and the heroes feel it in their cores every day. As Wonder Woman puts it in this issue: “I would rather go on biting my lip”.

I don’t measure up but I keep going, and that’s what the heroes in this story do too. We can understand them better through their fear and see them through the lens piece that Tom King has given us. 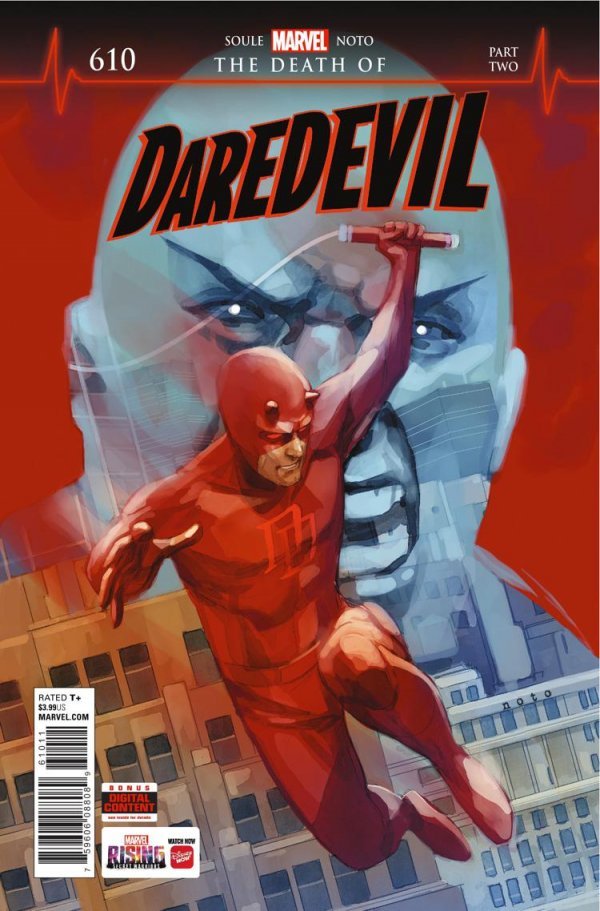 How does a man without fear manage to withstand the assailing forces of self-doubt and recrimination?

Don’t let yourself love anyone.

While Matt Murdoch is really bent on exposing the Kingpin’s secret of rigging the New York Mayoral election for himself, the real story in this story is Daredevil’s refusal to let Elektra go from his life.

There’s a real fear of being without that someone who makes you feel like you’re better when you are with them. To some people, it’s a powerful narcotic to be with that special person, but when you lose them, not only have you lost that sense of specialness but you also lose your self-esteem.

Elektra is a killer and Matt Murdoch isn’t, and Charles Soule reminds us of that fact when Daredevil recalls the difference too. It’s a hard realization for him but at the same time, it’s something that he should have remembered, given their history together.

What do you expect? It’s his weakness and it’s that weakness that elicits fear. So, it’s simple: don’t love anyone and watching Daredevil walk away from that is to bear witness to a truly harsh and scary thing. 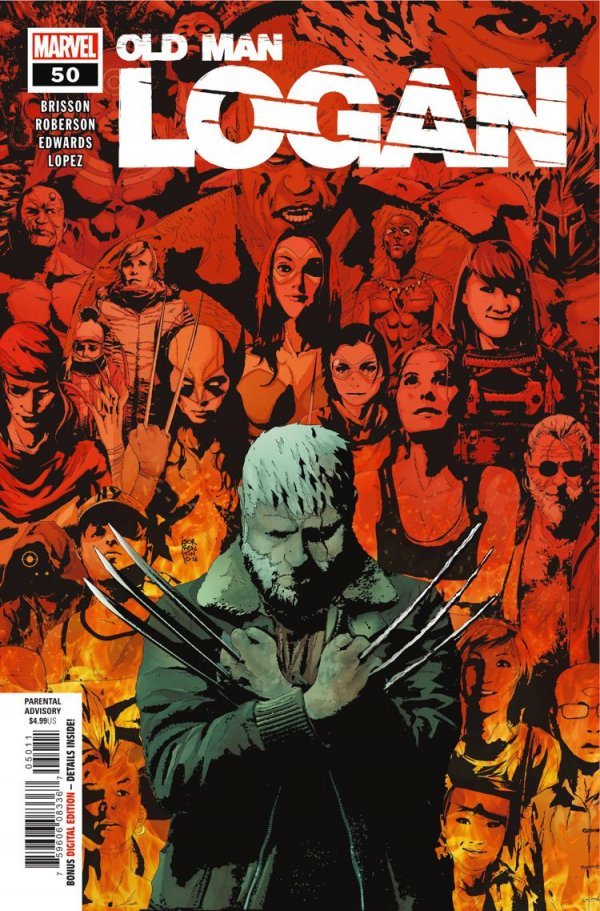 I was waiting for this. I mean, the epic confrontation between Logan and Maestro; it’s a real answer to the decades-old question of would Wolverine be able to actually top the Hulk?

Sure enough, we get our answer, but I have to confess, it wasn’t as scary a battle as I thought it was going to be. It had all the right elements: hostages, the grim spectre of death looming over the horizon – I actually thought it might be a bit more gripping than what it turned into.

I’ve been loving Ed Brisson’s stuff with this character. I knew that it had to end the only way it could, but the surprising fact that we are looking at spin-off from this book, titled “Dead Man Logan” is definitely something to look forward to. 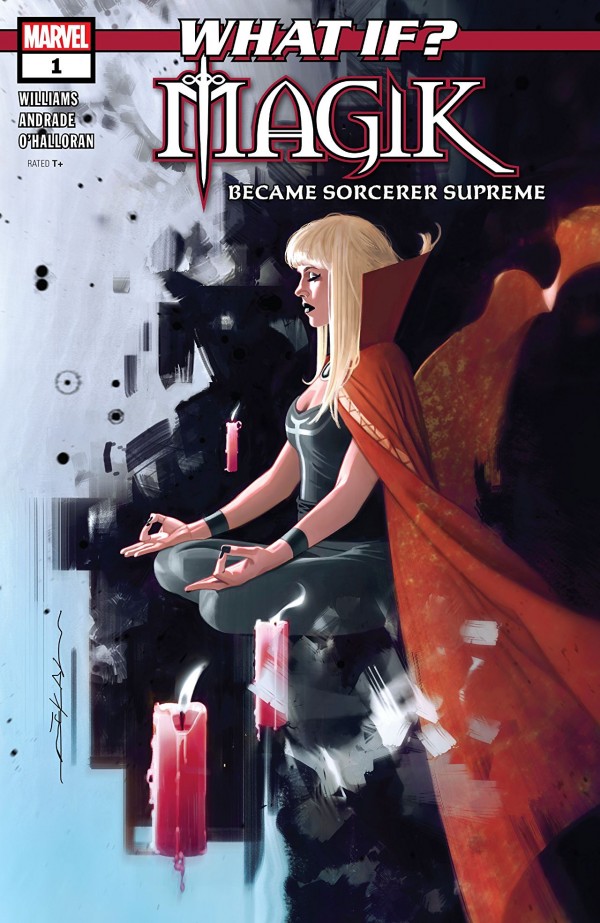 Illyana Rasputin is possibly one of my favourite characters of all Marvel-dom. She is also a remarkably obscure character too. Which means that I have to constantly explain who she is, should people ask me the inevitable question.

Usually I just say Wolverine to make it all easy.

But this is a remarkable one-shot story that imagines Magik on another pathway than the one she walked with the X-Men. However, it begins with the same undercurrent that ran through the original min-series: fear of someone who has power over you.

This one-shot is from Leah Williams and Filipe Andrade. I’m not overly familiar with Andrade’s work but I found I didn’t mind it. It clearly has a touch of Sienkiewicz in it and for the subject matter and character, it definitely was appropriate.

Williams does a stunningly good job of creating an alternate storyline that is completely believable. It’s a tale that not only makes sense within the scope of the main character but also the supporting ones as well. This is the Stephen Strange I remember from the 1980’s, in all his arrogance and campy 80’s humour. Plus, the showdown between Belasco and Strange was well-worth the price of admission. 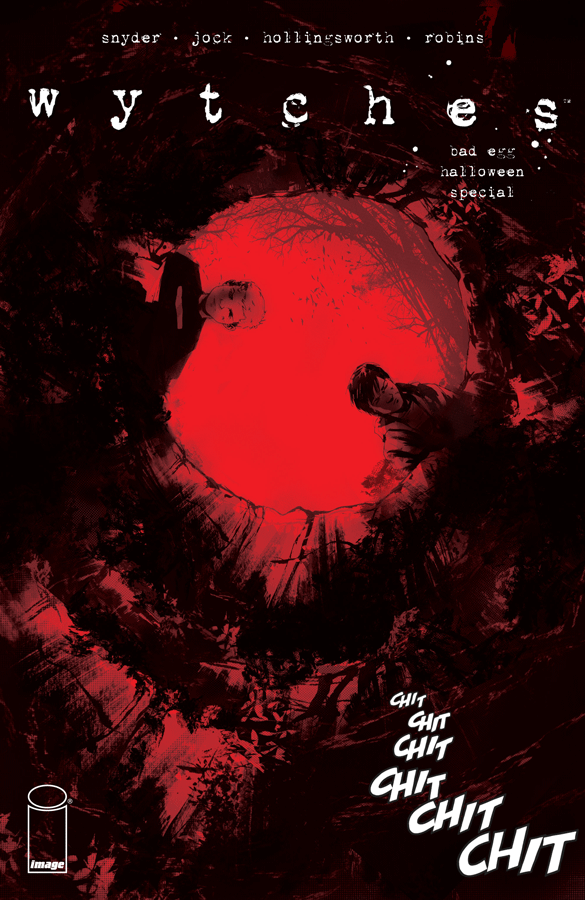 Scott Snyder and Jock – well, that’s enough of a combination for anyone to want to look at this book, but there’s a deeper fear than just the supernatural at play that makes this one-shot book masterfully compelling.

Take Seb, a young Irons in training, who by nature of his destined path is a kid without a stable homelife. Stability is everything to a young person. It creates a massive insecurity in them and by the time they reach middle-school, they desperately need boundaries. They crave reliable relationships, loving guardians and solid things in their lives they can count on.

Seb fears these things as root fears, possible more than he fears the wytches his family is meant to kill. While these are most certainly the epitome of the things that go bump in the night, the fact that Seb knows that he will have to once more pull up roots and move again causes him more pain than the fear of facing these creatures again.

It’s true. Kids are remarkably resilient when it comes to traumatizing events. Yet it’s the absence of foundational objects in their lives like a good home and nurturing people that can be more damaging than people realize. When a child has these stable elements in his life, he can afford to dream, explore and grow. Their absence indicates the loss of a childhood that is so needed in a person’s life.

The threat of Snyder’s Wytches pales in comparison. Seb can handle monsters; his entire life he’s known about them. But the prospect of losing a friend or a home is the thing that really incites fear.

Jock’s ephemeral art supports the notion of instability with his use of shadow and indefinite shapes. Looking at Jock’s work reminds me of the artwork I used to look at in comics like 2000 AD. Those were the comics of my childhood and this book about

That’s what I like about this story. The reader feels for Seb. His growing friendship with Jackson is everything that’s missing in his life and set against the backdrop of losing this friendship, another home and his strained relationship with his mother, the wytches are almost an afterthought. You know they’re going to be destroyed, but what really drives this story is the desire to know if Seb will be okay in the end.

Yeah … this was a scary story based on the real human fears of loss, instability and a realization that things that go bump in the night are transitory. Losing a friend, a home, stability? Jesus, that stuff lasts forever.

Wytches: Bad Egg is the pick of the week for this list. It’s a story that’s not as simple as it looks. There are real fears in this world and they’re worse than anything we can conceive of in the supernatural world.

I’m reminded of this last line from the film Stand By Me: “I never had any friends later on like the ones I had when I was twelve. Jesus, does anyone?”