I have to say, this is a reflection of the level of quality DC puts out on a weekly basis. When I consider the fact that not only did their talent pool get me back into reading perennial titles like Superman, Batman and the like, but the level of experimentation that they are willing to undertake in the pursuit of new story ideas is also a reason why the lion’s choice of titles tends to be a DC book.

Granted, Image, IDW, Dynamite and Marvel have their winners too, but lately it’s been DC that tends to stand to the forefront in my mind.

I love the integration of Hanna-Barbara characters into the mix of their regular titles as well as the tribute titles like Kamandi, Mr. Miracle and the like. The celebration of Jack Kirby’s centennial is a wonderful idea that elevates the origins of the King’s DC work and gives contemporary creators a chance to show their talent as they pay tribute to his.

All in all, DC’s had a banner year, at least in my humble opinion. It’s a golden time for this illustrious company. 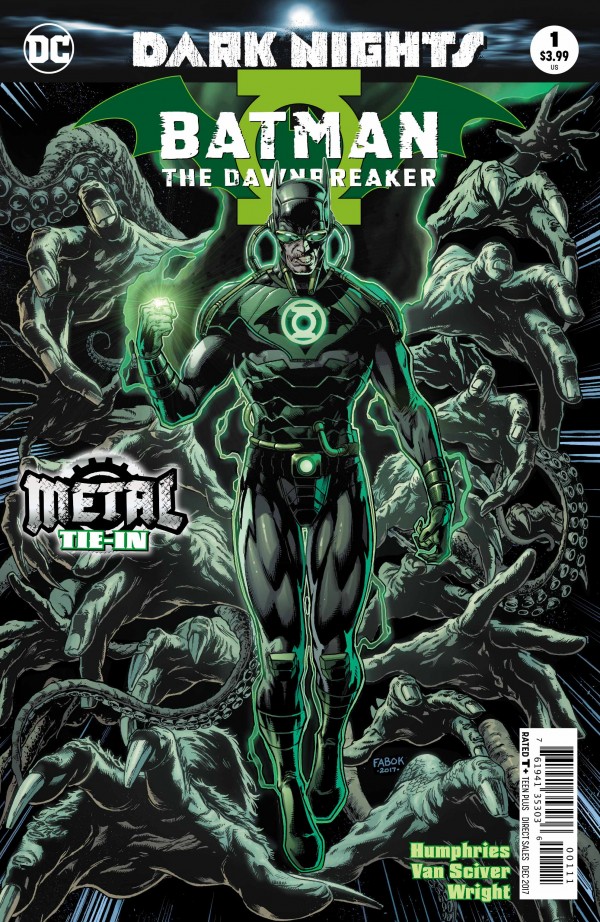 The art in this is absolutely scintillating. Ethan Van Sciver truly brings his A-game to bear on this vividly evil book.

Essentially, we are looking at another variation on the Dark Nights Metal-wrought, anti-hero team with the appearance of the Green Lantern ring finding a distraught Bruce Wayne after he has just witnessed the death of his parents. His emotional energy over-rides the ring’s ethical protocols and he becomes Batman the Dawnbreaker with his own energies controlling the ring and ready to dispense lethal justice upon Gotham.

It’s dark, visionary and definitely uses the multiverse to a nefarious purpose. Sam Humphries has given us a deliciously evil origin story to read and Van Sciver, an absolutely beautiful one to behold. 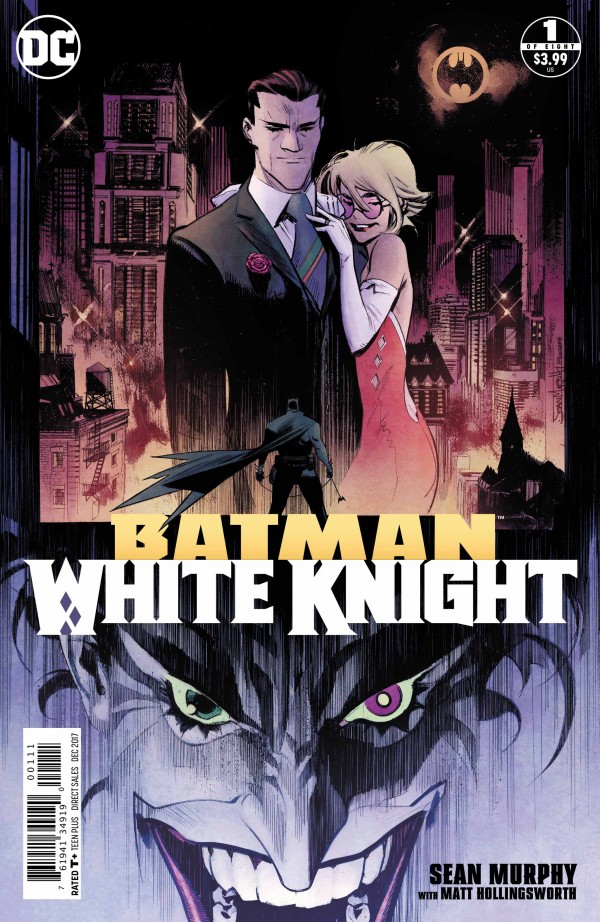 Sean Murphy scripts and draws this compelling premise of role reversal. Just what would happen if bagman finally succumbed to the intense pressure of constantly defending Gotham and the Joker had recovered his sanity, only to show exactly how messed up the Batman was?

In fact, that’s the ironical and devilishly clever angle to this story. The Joker seems to have recovered his sanity and the Batman has lost his. The roles are reversed.

Batman was not deputized by the Gotham Police Department. He’s a lone vigilante and while his obsessive pursuit of the Joker appears to be justified, his actions are reckless, placing the public safety at risk and culminating in a vicious assault on his quarry that actually earns the public sympathy of who was once considered the most dangerous man alive.

I have to say, I’m really enjoying this delightful twist. I’m sure other Batman fans will too. 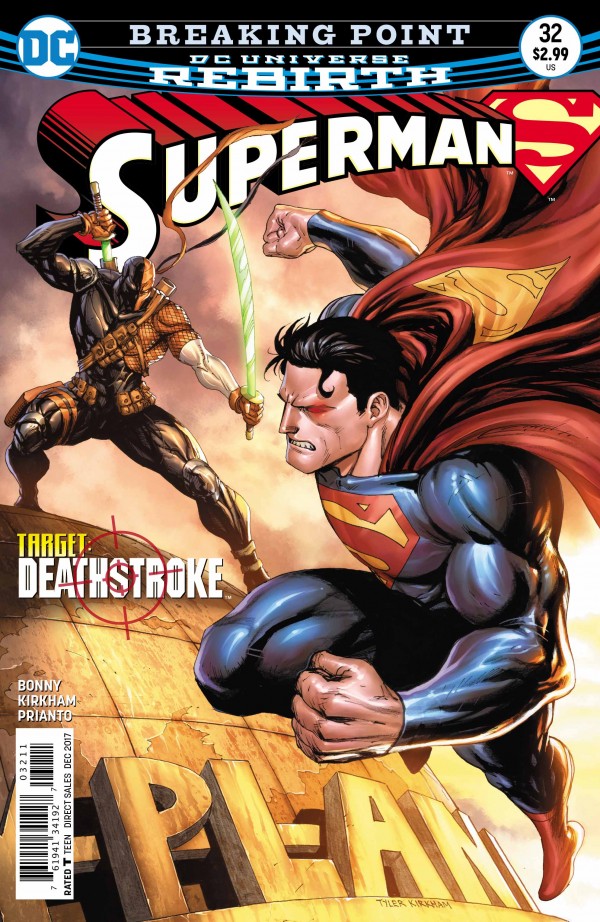 A classic hero-villain face-off. I love that Deathstroke can go toe-to-toe with Superman with enough planning and forethought. Breaking Point, Part Two” is a great story by James Bonny and Tyler Kirkham that shows the best super-power is a cunning brain. I also like the fact that it’s not an extended conflict, because all the best writing in the world won’t be able to keep Deathstroke on his feet in an impromptu conflict, let’s be sure.

Still, it’s a two-part story that also underlies the fact that the family dynamic between Lois and Superman is a dimension that will need more forethought and planning when it comes to writing about the Man of Steel. However, with the stories of Earth-Two Superman and his Lois combined with the 1990’s “The Adventures of Lois and Clark” television series in the collective consciousness, I’m sure that writers like Bonny will have an abundance of story fodder to draw from. 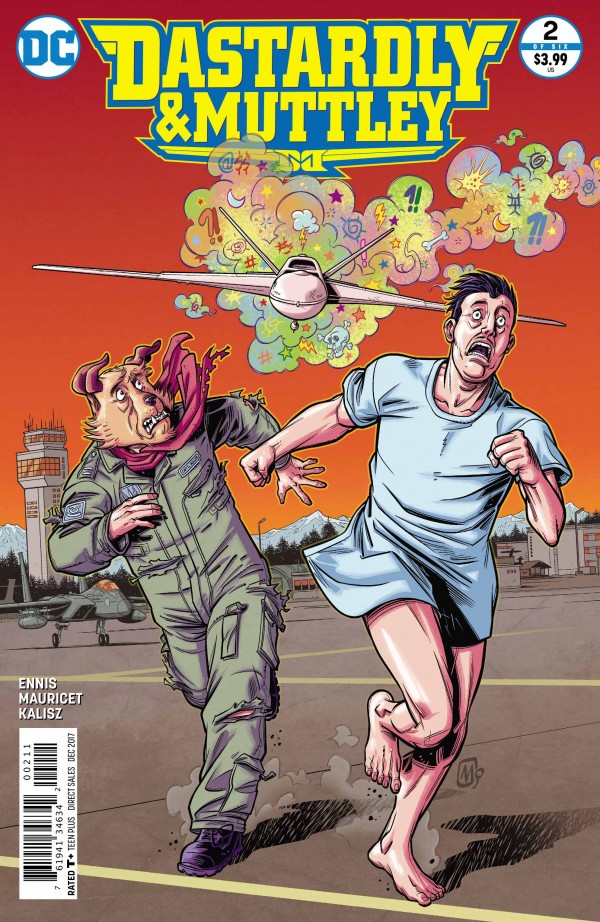 Very much like the last WB character book I read (Batman and Elmer Fudd), I was totally wrong about how I would enjoy this offering.

What’s acceptable about it is that the storyline actually embraces the cartoon-like situations Dastardly and Muttley get into, via the device of a reality-shaping chemical spread about Western Europe and the Eastern United States via an unmanned drone called “War Pig’.

It’s thoroughly hilarious and if you remember Dick Dastardly from the cartoons, you’ll recognize his speech patterns and mannerisms. It’s an accurate piece of writing that captures the humour of this zany cartoon couple.

Is it Ennis’s best work?

I don’t think he cares. Neither should we. It’s fun and fancy at its finest and I’m still laughing as I type this.

… and then there’s the final frontier for Batman; a place I never thought I’d see Tom King or any other writer take the Caped Crusader, but there it is: marriage.

And the answer? Well, it’s probably common news by now, but I don’t want to be the one to ruin for you in case you’re one of those cave-dwellers that hates spoilers.

The Internet has destroyed the simple joy of anticipation of a story, hasn’t it?

Still, “The War of Jokes & Riddles” is shaping up to be a most memorable Batman story for me. It’s intricate, thought-provoking and it definitely captures and defines a clear rendition of the two most complicated of Batman’s foes: the Joker and the Riddler.

But what I liked most of this story is that it leads Batman down a path of self-realization, and that’s sucker-punch King finishes you off with. By the end of the story, while you are stunned by Batman’s moment of self-discovery, then you realize that it’s taking you to the moment of Batman’s proposal to Catwoman and her answer.

It’s a whole new world for Batman and that’s why Batman #32 is the Pick of the Week for this edition!

With everything said about Tom King’s superb writing, I also have to overwhelmingly give praise to Mikel Janin and his wonderfully expressive art. I don’t think I’ve seen characters’ emotions so expertly presented since Brian Bolland. Janin captures the details of characters’ faces so cleanly, that you can imagine the tautness of their facial muscles. He contorts and shapes them in ways that are so lifelike, it’s a real treat to enjoy.

Still, the combination of these two creators in action is more than wonderful. Their collaboration is an example of the success DC is enjoying these days. I have to make time to explore this phenomenon and ask creators what’s it like working for DC.

Hmm … now there’s a DC exclusive in the making.